Continue to The Hollywood Reporter SKIP AD
You will be redirected back to your article in seconds
Skip to main content
December 4, 2019 9:19am

From Lady Gaga to Rihanna to Millie Bobby Brown, entertainment stars have entered the realms of makeup and skin care so that fans can re-create, and riff, on their iconic looks. Now throwing her name into the mix is Kesha, with the launch of her makeup line, Kesha Rose Beauty, set to debut this week at a soon-to-be-revealed time.

Produced in collaboration with Los Angeles-based cruelty-free cosmetics brand HipDot, the collection is starting off with a 12-pan eyeshadow palette, two dual-ended liquid eyeliner pens, a lipstick bullet and a lip gloss. Prior to the launch, Billboard Style spoke with the “Raising Hell” singer to discuss the collection’s inspiration and how she wants her fans to feel wearing her makeup.

What made you want to start your own makeup line?

I’ve been a canvas for makeup my whole career, and before that, I just loved to play with it. I’ve had so much makeup on my face for the past 20 to 25 years, so I just really know what looks good, what’s easy to remove, what looks awesome. [Creating my own makeup line] has been in the back of my mind for quite some time, and I’ve been working on [this particular collection] for over a year.

People know that I’m obsessed with rainbow, glitter and all things extraterrestrial and psychedelic and bizarre, and I wanted to capture that in the makeup that I created, but still make it wearable. I swatched shadows for texture and color for over a year, because I really wanted to make sure that I put something out that I could stand behind — something that I would actually put on my face.

Was there a specific moment that served as inspiration?

There have been many moments. My entire life has been incredibly instrumental and inspiring for the palette [and collection]. The packaging is almost Art Deco because the first time I ever saw makeup was my grandmother’s, and I felt really special and beautiful [holding her products]. I wanted my packaging to feel just [like that]. Color-wise, I love rainbows, so I wanted to incorporate a lot of different colors that are super wearable, but also some colors that I’ve never seen before. 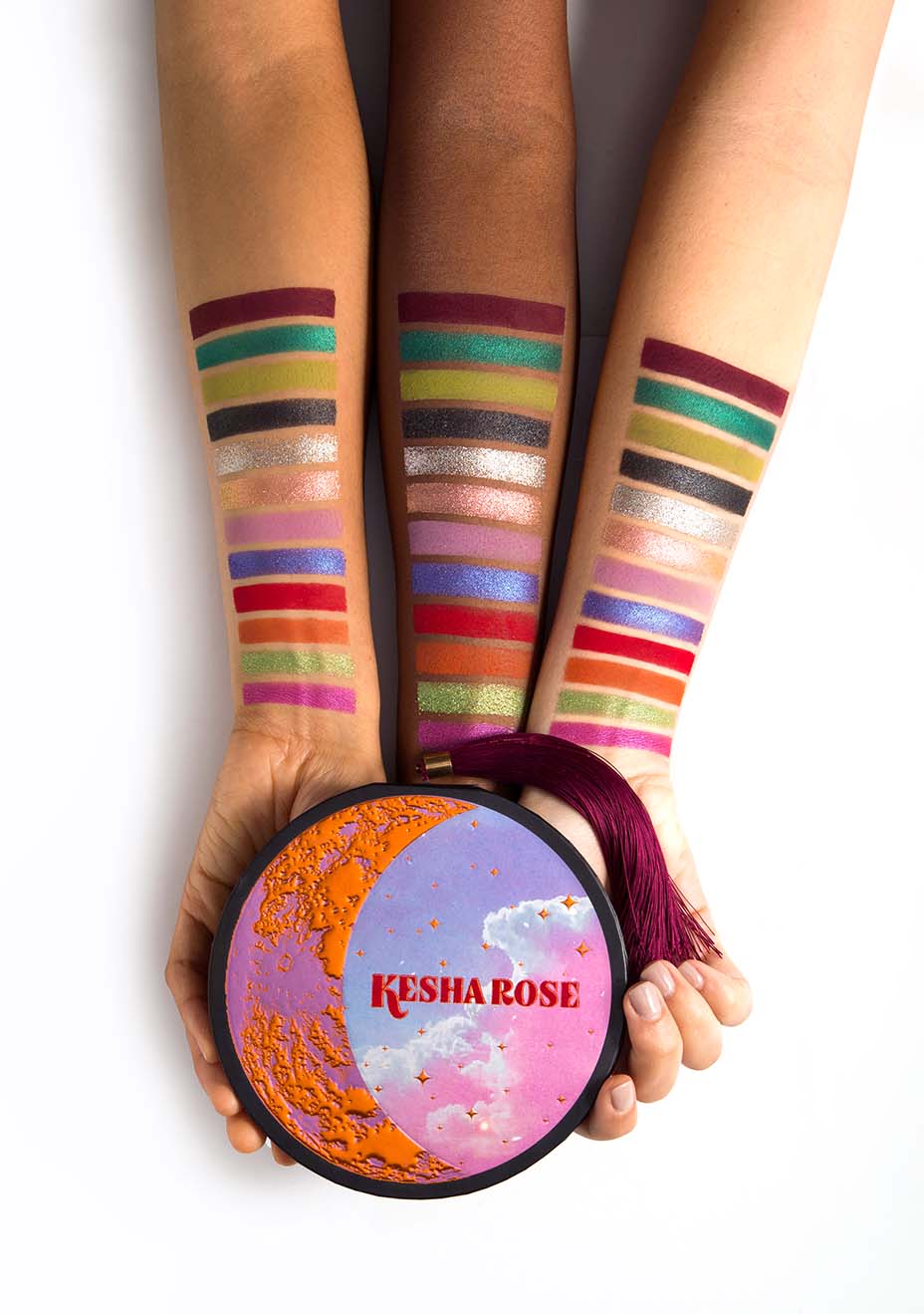 What about the eyeshadow palette? What’s special about it to you?

There was one night where my band was driving through Yellowstone [National Park], and we decided to go camping. My makeup artist, Vittorio Masecchia, had a ton of bright colors [in his makeup kit]. We all went deep into the woods and were up the whole night painting each other’s faces with different colors, running around the woods. It was such a beautiful moment with friends and people I work with. We had so much fun, so a huge part of that memory inspired me to want to have all of these colors in my palette. It reminds me of that moment in my life and is also inspired by my last record, Rainbow. I wanted to have colors that you can mix and match and play with.

Certain things that are [daytime-appropriate] that you can wear to work, and then, with the same palette, you can go crazy on your face with a purple smokey eye or whatever if you go out that night. And, of course, there’s glitter, because I’m the glitter queen monster. The palette is called the “FTW Palette,” which can stand for “for the win,” “fuck the world” — whatever you want.

Animals!! I love u and I’m so so sorry buuuut looks like We have to push the date of the #kesharosebeauty launch BUT We’re still rushing to get the collection in your hands **next week** tho!!! We’ll announce our exact new launch date on Monday but we promise it’s coming AS SOON AS HUMANLY POSSIBLE!!!!!! Love u !!!

The dual-ended eyeliner pens are also unique. How did you come up with the colorways for those?

I needed a black liner that wouldn’t move and I’m really particular because, as everyone knows, I like to go hard. I jump in the ocean, or I’m doing cartwheels onstage — or whatever the fuck I’m doing. So I really wanted a black liner that I could sweat in or even sleep in, and that wouldn’t move unless I used makeup remover. I actually recently wore it on the red carpet for the AMAs. I really did want that classic black, and then I thought about what colors I wished I had in my kit at home. I picked out a deep beautiful blue that reminds me of the ocean [to go on the other side of the black pen]. For the other pen, I wanted to be able to create a lighter look. The very burnt orange tone reminds me of the earth in Arizona. The other end is a high-pigment gold with shimmer in it, which is perfect for adding highlight to an eye [look], or even as an eyeliner alone, because it makes your eyes look really fun.

I just really wanted people to have options. They’re some stranger colors that you can play with. It was important to me to do something different that I haven’t seen a million times. I wanted to [create something] that was really unique and special that people can experiment with. I call them the “wherever, whatever” wands. Actually, one of the inspirations for the pens was when I had fallen asleep at a party, and someone drew on my arm. I really liked it and thought it was a cute little drawing. So I imagine if you wanted almost a temporary tattoo, you could have a little party and draw on each other’s arms with these. 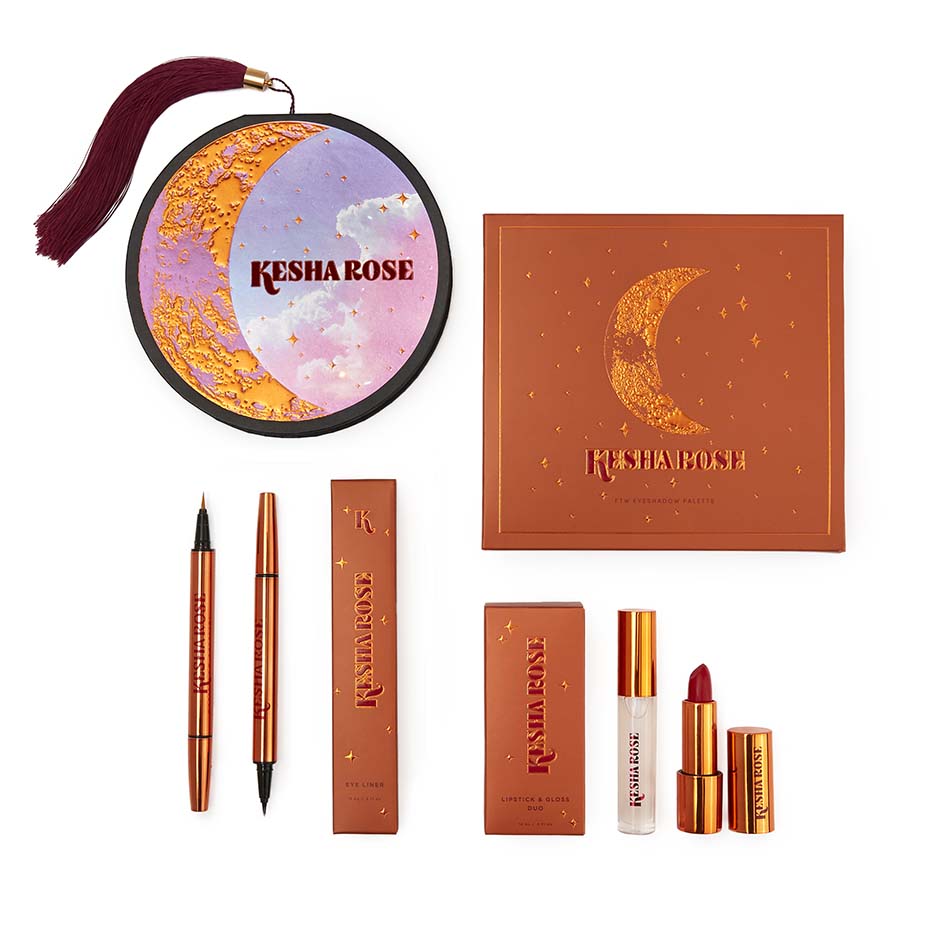 Your new album, High Road, is coming out in January. Did this collection inspire any of the songs, or vice versa?

Absolutely. Every shade [in the eyeshadow palette] is a different song title, whether it’s old school, or yet to be released, and the light pink is an unreleased track. Actually, the shadow I wore on the AMAs red carpet is a glittery smokey black shade called “Tonight,” which is the title of the new record’s opening song. On the night that the song was inspired by, I was wearing some test shadow with some black sparkle in it. There’s a little story behind each shade.

What do you want your fans to feel when they’re wearing your makeup?

Whoever saves up to buy this makeup, I want them to feel special when they buy it, and I want them to know that it feels special on my end, too. I took a lot of time and didn’t rush the process. My goal is for everyone to love it, especially my fans. I want them to know that I’ve been wearing my products [almost exclusively] for the last couple videos and red carpets, and it’s something that I wear [for] important things. I stand behind [the products] very much.

I want them to feel completely unrestricted by beauty standards that have been put in place by society. I want them to realize that I’ve made the products for people to play with and have fun with, and it’s not about perfection or looking like you’ve been filtered through a million filters. Perfect is unattainable and normal is boring, so I just want them to feel happy and free to experiment and play.

The collection was made because of all the happy times I’ve used makeup incorrectly, so I want everybody to play with it and fuck the world. I don’t think that anyone should pay attention to what anyone else will say or think. It’s a beauty line made [that isn’t made] with any beauty standards set by anyone but yourself.

This article originally appeared on Billboard.com.