There was a moment at the end of 2017, while Disney was in the thick?of negotiations for its industry-rattling deal to acquire most of the assets of 21st Century Fox, when then-chief strategy officer Kevin Mayer realized that he needed to get on a plane.

Mayer and general counsel Alan Braverman had already commandeered a conference room on the Disney lot in Burbank as they tried to hammer out an agreement with Rupert Murdoch’s dealmakers. But Mayer knew it was time to take the negotiations to a new level. “I told Bob [Iger], ‘I’m flying to New York tonight and I’m not leaving until this deal’s done,’?” he reflects from his office in early December, almost exactly one year later. “For 10 days, it was late nights and early mornings and over the weekends. I missed the Star Wars premiere and so did my?team.”

It paid off Dec. 14 when Disney announced that it would purchase Fox’s film and TV studios, FX and National Geographic channels, regional sports networks (which Disney has since agreed to sell), Star India and stakes in Hulu and Sky (which Fox said in September it would sell to Comcast) in a $52.4 billion deal. Though the effects of the transaction immediately began to ripple through Hollywood, it would take another seven months and a counterbid by Comcast — boosting the deal’s value to $71.3?billion — before Disney officially won Fox.

While the transaction still awaits a handful of regulatory approvals abroad, Mayer’s attention has already been diverted. In March, the onetime Clear Channel Interactive CEO was promoted to run Disney’s newly created direct-to-consumer and international division that houses ESPN+, the upcoming Disney+ streaming service and a soon-to-be majority stake in Hulu, effectively putting him in charge of the 95-year-old company’s future and fueling speculation that he could succeed Iger when the CEO steps down in 2021. Charting a new path for Disney and taking on Netflix won’t be easy (or cheap) for Mayer, 56, and the team he’s assembled, including former studio marketing chief Ricky Strauss, who has been tasked with building up a library of new original shows (The Mandalorian) and movies (Lady and the Tramp) to complement a library of Pixar, Lucasfilm and Marvel titles. But the $165 billion media conglomerate can’t rely on movie ticket sales and TV subscribers forever. Notes Mayer, “Having a better relationship with our consumer puts us in control of our own destiny.”

Did you have a moment in negotiations when you thought the?Fox deal wouldn’t happen?

It was always clear that the transaction made a great deal of strategic sense. With that in the back of your mind, you always think you can overcome most of the day-to-day travails of doing a deal like this. There were a couple of times where it looked like there was a problem. We overcame it.

It was the biggest [deal] we’ve ever done. We did have a moment or two when there was a disconnect in terms of value, but that’s to be expected. We didn’t pay a price we thought was unfair at any point.

How did Comcast’s counterbid impact the ultimate deal?

Well, it wasn’t great. I’m not going to lie. We were concerned that since Fox is a public company and they have to entertain offers until a deal is voted on by shareholders, Comcast would come back in, and sure enough, they did. Although we paid a lot more than we had initially negotiated for, it was still a very good deal.

What will the impact of the Disney-Fox deal be on the entertainment industry?

Consumers on average pay for between three and four streaming services. How will you make sure Disney+ is one of them?

We have to take our content and make it as exclusive as we can to our service. We have to make the app and the technology pretty seamless. You can find our content under our key brands, which is a real differentiator for us.

What did you learn from the launch of ESPN+ that you’ll apply to Disney+?

It validates our strategy. If you put high-quality content in front of people that want it and you have the technology that works and you market it the right way, you can succeed. I think that enhances our expectations for the rest of our launches.

What’s the right mix of original and licensed programming on Disney+?

Many of our core brands are going to be in that service. Some of this content will have an initial window, like a theatrically released film, some will be on television first, some will be original for the service. It will skew naturally from an hours perspective, because of how much we’ve invested over the years, toward product that’s non-original, but we’re making a lot of original content.

Would you consider reviving the Marvel shows that Netflix canceled?

They are very high-quality shows. We haven’t yet discussed that, but?I would say that’s a possibility.

Would you have renewed the Friends deal with Netflix if you had been in WarnerMedia’s position?

I’m sure [WarnerMedia CEO John Stankey] had his reasons, but when we were faced with a similar decision, to take [our programming] off in preparation to put it on our own service, that was right for us. We will continue to do that. Ultimately our direct-to-consumer service is going to be the only place you can find that?content.

WarnerMedia said it will explore selling its stake in Hulu, and Comcast could do the same. Is it your goal to own 100 percent of that business?

We’re open-minded to outcomes here. Maybe that would happen someday. We’re not in any active discussions right now.

How does Hulu fit into your international plans?

We would like to have an international trilogy of services where it makes sense. We want a sports service like we have here; we want a general entertainment service, which would be Hulu, in different places around the world where we don’t have that; and we want to have Disney around the world. An international rollout of Hulu would be something that we’d be very interested in, and we’re talking to Hulu about that now.

There was a time when it seemed likely that Disney would buy Vice. What happens to that investment following the recent $157?million write-down?

We like Vice a lot. Nancy Dubuc, who we have a lot of faith in, ran A+E as a joint venture between us and Hearst for a long time. They make great content. What they’re doing with news on HBO is really spectacular. It is a difficult space. As we know, it has been hard for everyone, and?they are not exempt from that. But?they are working very hard and have great creative instincts, a good business model. I think they are going to do great.

Now that the Fox deal is nearly closed, what keeps you up at night?

The deal closing keeps me up at night, but it is almost done and closed. I’m eager to execute. I’m?eager to get these services out in the public’s hands. That is an?excitement more than it is a nervousness. 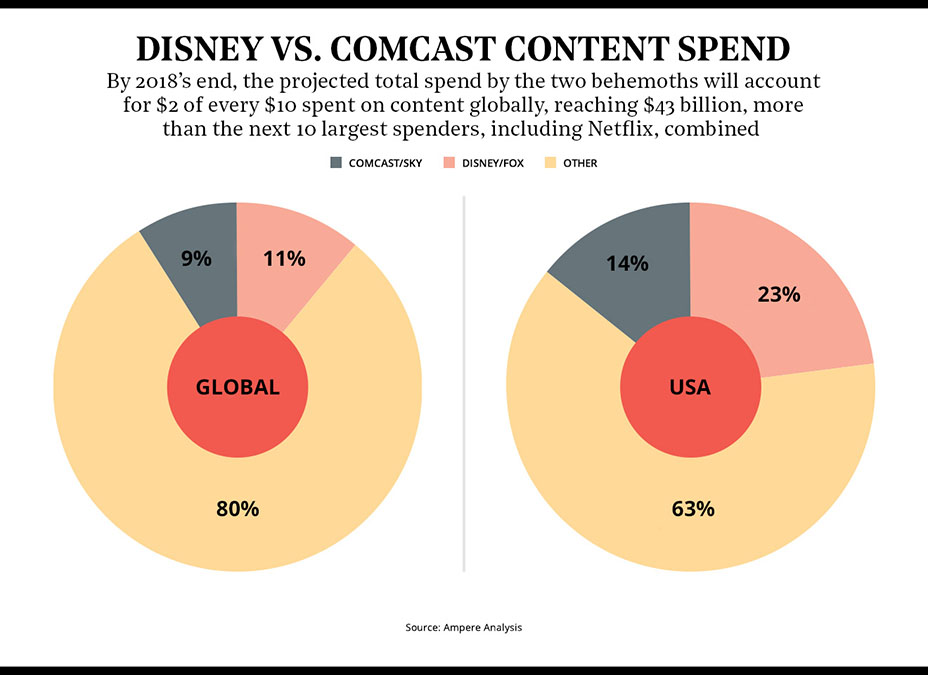