It’s a race against time for Sony Pictures as it begins eight days of reshoots on Nov. 21 for its drama All the Money in the World, having taken the step of removing star Kevin Spacey amid sexual assault and harassment allegations, and replacing him with Christopher Plummer. Co-stars Mark Wahlberg and Michelle Williams will work through the Thanksgiving holiday on the Rome set to ensure the Ridley Scott-helmed film meets its Dec. 22 release date. The cost: $10 million, which will be incurred entirely by producers Imperative Entertainment.

All the Money in the World is just one example of the economic reverberations being felt as claims of sexual misdeeds sweep through the industry. The collateral damage is impacting people who have little or nothing to do with the alleged offender.

Imperative partners Dan Friedkin and Bradley Thomas aren’t the only ones picking up the tab in the wake of the Spacey revelations. Netflix and Media Rights Capital are paying the House of Cards crew as they figure out what to do with the remaining 11 episodes of season six, which will not include Spacey as Frank Underwood. After Anthony Rapp’s accusation of sexual misconduct by Spacey was published Oct. 29, the streaming giant pulled the plug on the series, stating that it had been leaning toward ending House of Cards for some time, though insiders dispute that.

“Hundreds of people poured their hearts and souls into making All the Money in the World and we wanted to do everything possible to give the audience a chance to see it without being distracted by the recent allegations,” Friedkin says.

Sources say Netflix likely will be on the hook for Spacey’s entire season-six salary given that he did not have a morality clause in his contract. Netflix can shoulder the burden of a pricey scandal, but that’s not the case for the below-the-line Baltimore crew and others who count on income from the series. House of Cards contributed $129 million to Maryland’s economy last season, according to a state audit.

“We are in midst of working through what will happen with the movie with respect to the rights,” says Paul Davidson, The Orchard executive vp film and TV. Davidson declines to elaborate on the deal’s specifics, but sources say The Orchard likely won’t be left holding the bag. C.K. has agreed to take back the film, and unlike many of the others caught up in the wave of accusations, he might be best poised to return to the entertainment fold without a studio or network middleman. C.K. had a contingency plan to release I Love You, Daddy on his website if a buyer shied away from the controversial storyline about a 17-year-old girl who becomes romantically entangled with a lecherous 68-year-old filmmaker.

But others have been caught in the C.K. scandal crossfire. Sources say TBS’ animated comedy The Cops, co-created by C.K., has released the cast, crew and animators in the wake of suspending the comedian-producer as they determine the future of the straight-to-series project.

And Care2, the increasingly influential petition website, launched a campaign calling for stars such as Pamela Adlon and Amy Poehler to drop C.K.’s manager Dave Becky. Adlon quickly did, having good reason to disassociate her hit show Better Things. Poehler and Kevin Hart are among Becky’s other clients who are standing by him. No one has claimed that Becky knew that the incidents were harassment versus merely extramarital affairs. Care2’s Julie Mastrine, whose site has hosted dozens of petitions aimed at Hollywood since reports first emerged of Harvey Weinstein’s predatory behavior, admits that Becky’s case falls more into a gray area.

“[Becky] did come out with an apology for his role, and he’s saying he heard the stories third-hand,” she says. “But in the minds of those who are signing this petition, even just hearing about these stories and not taking them seriously is enough for us to call on these celebrities to drop him. It’s just one of those things where you hear a lot about people who have a lot of power or those close to them who are abusive and not doing anything.”

Some in the industry are calling for consistency in the responses, given the potential for career annihilation. For instance, four women have claimed that Jeremy Piven sexually assaulted them, yet HBO, which dropped C.K., continues to play Entourage on its platform. Ditto for Danny Masterson, whose The Ranch continues on Netflix despite accusations of rape and forced sodomy being investigated by the Los Angeles Police Department.

At the same time, talent agencies are scrambling to salvage clients after agents like WME’s Adam Venit (on leave) and CAA’s Cameron Mitchell (fired) are accused of abuse.

And for the alleged perpetrators, public statements are about self-preservation. They are following a predictable script, says one branding expert. “‘What can I say that shows an appropriate level of concern? What can I say to distance myself from this kind of behavior without taking a firm stance and preserving all of my financial partnerships?'” says the expert. “Harvey tried to do it by saying, ‘I’m going to therapy.’ Louis went further by saying the women are not lying. People are still hating on him, but at least he didn’t turn on the accusers.” 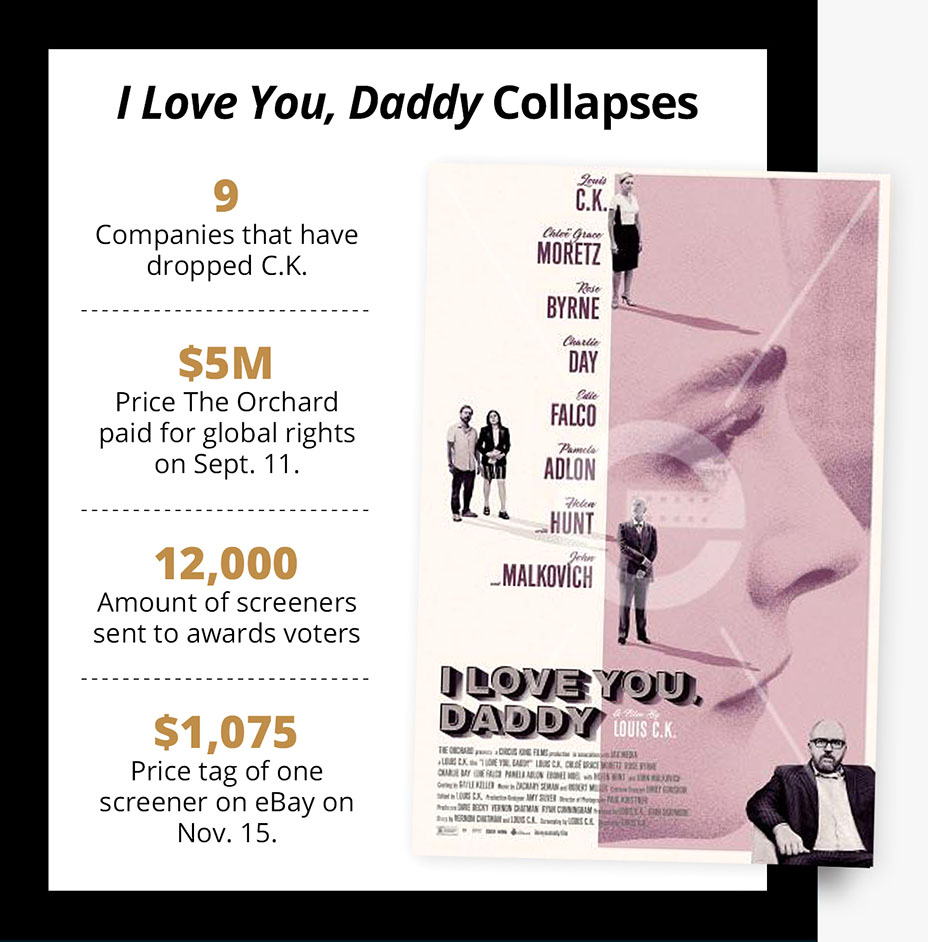 Marisa Guthrie contributed to this report.