“We can’t go on like this,” urges Jeff Daniels as Atticus Finch toward the end of Aaron Sorkin’s fine-grained stage retelling of To Kill a Mockingbird. “We have to heal this wound or we will never stop bleeding.” Those plaintive words, spoken about the cancerous racial inequality in 1930s Alabama, land with a visceral gut punch in 2018, all too clearly reflecting the ugly rise of the alt-right across a nation bitterly torn by the political dissemination of fear and hatred. It’s to Sorkin’s credit that he lets the contemporary parallels emerge naturally, without hitting us over the head, in a transfixing act of theatrical storytelling graced by exceptional ensemble acting.

Perhaps the most notable achievement of this thoughtful adaptation, and Bartlett Sher’s meticulously calibrated Broadway production, is that it takes Harper Lee’s 1960 novel — a modern American classic that pretty much all of us know either from studying it in high school or watching the outstanding 1962 film version — and makes us hang on every word as if experiencing the story for the first time.

Sorkin, Sher and their estimable cast work together to give every significant figure on the stage a distinct identity without a whiff of cliché. That nuanced revivification of familiar characters is matched by a haunting sense of time, place and community, and yet the bridge to our own era is implicit. This is not starchy masterpiece theater, it’s very much alive and emotionally impactful.

Even the riskiest choices pay off, such as having Atticus’ children, the book’s 6-year-old narrator Jean Louise “Scout” Finch (Celia Keenan-Bolger) and her older brother Jem (Will Pullen), as well as their visiting friend Dill Harris (Gideon Glick), played by adults. That potential disconnect dissolves within the first scene, instead yielding a beautiful duality that allows the play to unfold both as a story of children having their eyes opened to the cruelty of the world, and of those same figures as adults, reflecting back with sadness on the loss of innocence. The thematic emphasis on kindness and decency in the face of stark injustice is deeply moving. 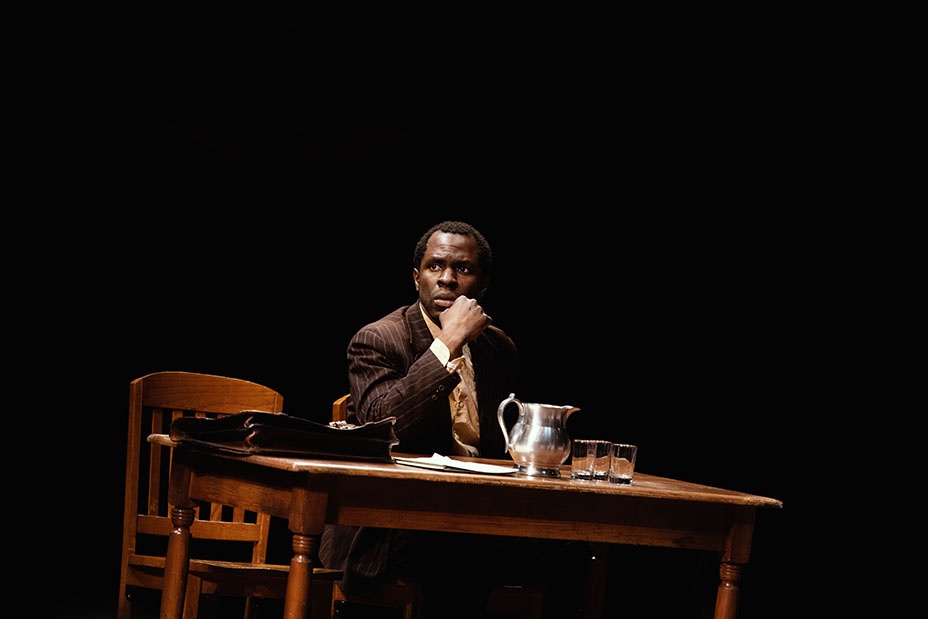 One of the works that put Sorkin on the map as a writer was A Few Good Men, so it should be no surprise that he’s adept at constructing a taut courtroom thriller with fiery speeches. He weaves the climactic trial throughout the story, calling the first witness just 10 minutes into the play. The majority of the audience knows how it will end for the defendant Tom Robinson (Gbenga Akinnagbe), a black man falsely accused of raping a white woman. Nonetheless, you find yourself holding your breath as his fate is decided, your eyes stinging with tears.

The other structural shift is the disclosure, early in the play, of the death of racist redneck Bob Ewell (Frederick Weller), father of alleged rape victim Mayella (Erin Wilhelmi). While Scout voices her skepticism about the official explanation that Ewell fell on his own knife, the doubts surrounding his fate provide a secondary thread of suspense resolved only in the tense final scenes.

Scout, sporting tomboyish dungarees and a hacked-off basin bob, remains at the heart of the story, grappling with the complexities of adult behavior and small-town mentalities. But she shares narrating duties here with Jem and Dill. With their funny, folksy Southern vernacular, they break the fourth wall in ways that draw us in while heightening the theatricality of the presentation.

Designer Miriam Buether has transformed the stage into a vast derelict industrial space in which the principal settings — the courthouse of fictional Maycomb County and the porch of the Finch family home — are assembled before us. A guitarist (Allen Tedder) sits on one side of the stage and an organist (music director Kimberly Grigsby) on the other, playing original accompaniment written by Adam Guettel that helps to sketch the milieu, oil the fluid scene transitions and provide occasional underscoring. The evocative stagecraft extends to Ann Roth’s character-defining costumes and Jennifer Tipton’s exquisitely descriptive lighting.

What remains unseen, along with the jury of 12 white farmers, is the home of Boo Radley (Danny Wolohan), the recluse whom the town gossips have branded as a living ghost likely to murder them in their sleep. To the impressionable kids, that morbid threat has become an obsession; they conjure the windows of Boo’s home with its drawn curtains, and the knotted oak tree outside where mysterious gifts start appearing, making them as real as any physical element of the staging. 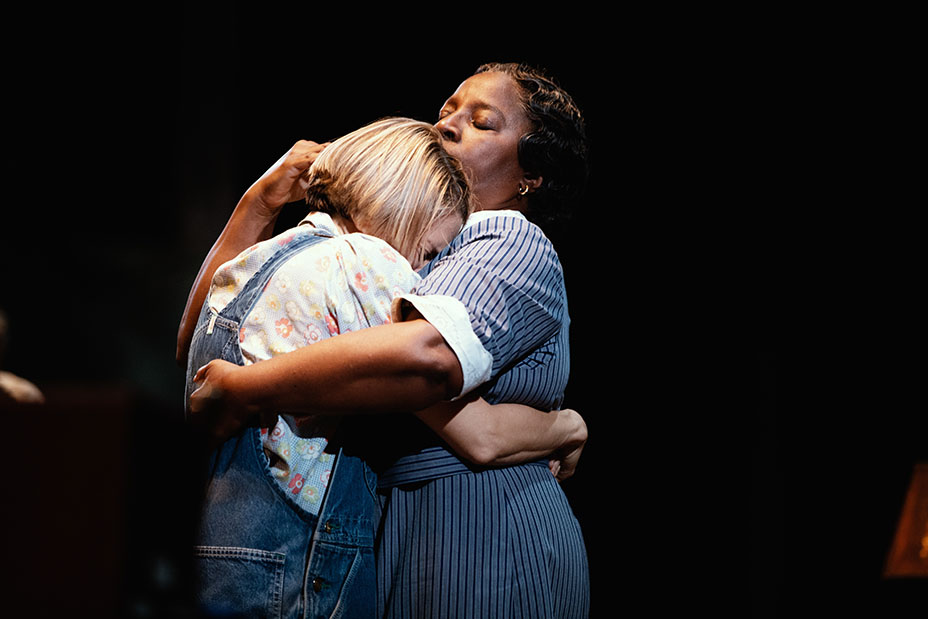 Of course the big challenge in tackling To Kill a Mockingbird is to make audiences forget Gregory Peck as widowed lawyer Atticus, an indelible persona carved in stone in Robert Mulligan’s film. Daniels approaches the character not as a monument of unimpeachable morality, but as a prickly man trying hard to teach his children the values of honesty and compassion, of not rushing to judgment even of those fueled by hate. But his tolerance is constantly called into question.

To the adoring Scout, Atticus is virtue and intelligence personified. But to Jem, who already sees himself as a feisty young man ready to take on anyone, his father seems exceedingly meek. It should be noted, however, that Sorkin has made the smart decision to disregard the more flawed Atticus of Go Set a Watchman, Lee’s earlier draft of Mockingbird, whose 2015 publication was surrounded by controversy.

“You gotta crawl around in another man’s skin ‘fore you can really know him,” Atticus tells the children, reminding them that there is fundamental goodness in everyone. Daniels is highly skilled at showing the flickers of self-examination behind the gravitas — while Atticus insists that every last person in Maycomb is to be regarded as their “friends and neighbors,” we see the piercing shadows of doubt in his thinking.

This is especially true in his spiky exchanges with Calpurnia (LaTanya Richardson Jackson), the long-serving family maid and the children’s surrogate mother. Her tenderness toward Scout, in particular, is conveyed with touching understatement. As a black woman in the pre-civil rights South, Cal remains true to the period by keeping her views largely to herself. But in her body language and attitudes, the marvelous Jackson shows that she is a friend to Atticus and therefore free to let her exasperation be known, along with her disappointment in his naivety. This gives Cal, like Tom, more substance as a character than in the movie.

Atticus’ position becomes harder to defend after Bob Ewell drops by on what he calls a “fellowship” call. The boozing weasel helps himself to a glass of bourbon before expounding on what he sees as the tragedy of white defeat in the “so-called” Civil War. He then informs Atticus that his fellow Klansmen will not abide race traitors, leaving him with the chilling warning, “One tree, two ropes.” The horrific spectacle of Ewell and his cronies filing down the theater’s aisles, wearing grubby hessian sacks over their heads and brandishing shotguns or chains, as Atticus sits outside the county jail where Tom Robinson is being held overnight, is a shock that ties your stomach in knots. That scene closes the first act on a note of tremendous power. 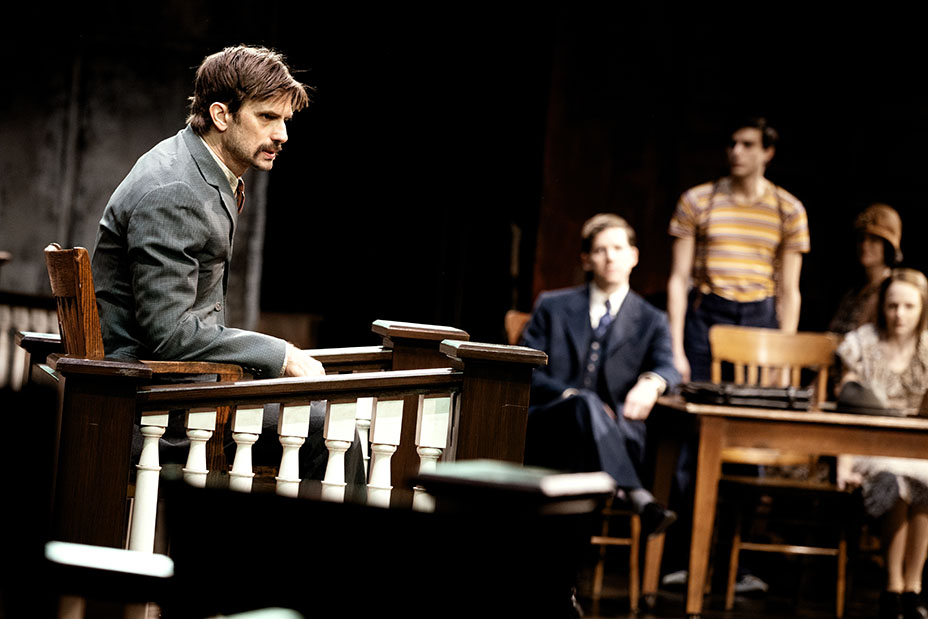 In subtle shading work that also helps Daniels make the character his own, Atticus has a lot more humor than many will remember, especially in his banter with the kids, to whom he gives back as good as he gets. Sorkin has always excelled at articulating righteous indignation, and there’s certainly no shortage of that in this searing depiction of racial inequality, of bone-deep prejudice and inhumane injustice that resonate loud and clear in a country whose current stewardship tries to make a virtue of incivility. But the tone is defined as much by lightness and warmth, by the gentle teasing of family life in which even anger and incomprehension are tempered by love.

Daniels gives the production a commanding center alongside the heartbreakingly good Keenan-Bolger, so sparky and amusing as Scout strains to understand what’s happening. But this is very much an ensemble piece in which every element is indispensable.

Pullen is constantly puffing himself up to seem bigger and brawnier even though hot-tempered Jem is just 10 when the story begins, while Glick gets many of the laughs as Dill, an endearing, gangly nerd trying to sell a worldlier version of himself to hide his own yearning for familial affection. In one of the play’s gently shattering moments, Atticus considers Dill, seemingly for the first time, telling him, “You have no business being kind, but there you are.” Lee based Dill on her friend Truman Capote, and there are what feel like subdued hints here that the character is gay.

As Tom Robinson, a 25-year-old father of three, Akinnagbe makes a superb Broadway debut, conveying the strength and dignity that have endured despite this hard-working man’s misfortunes, through his clear-eyed gaze or even simply his posture in the courtroom scenes when his back is to the audience. 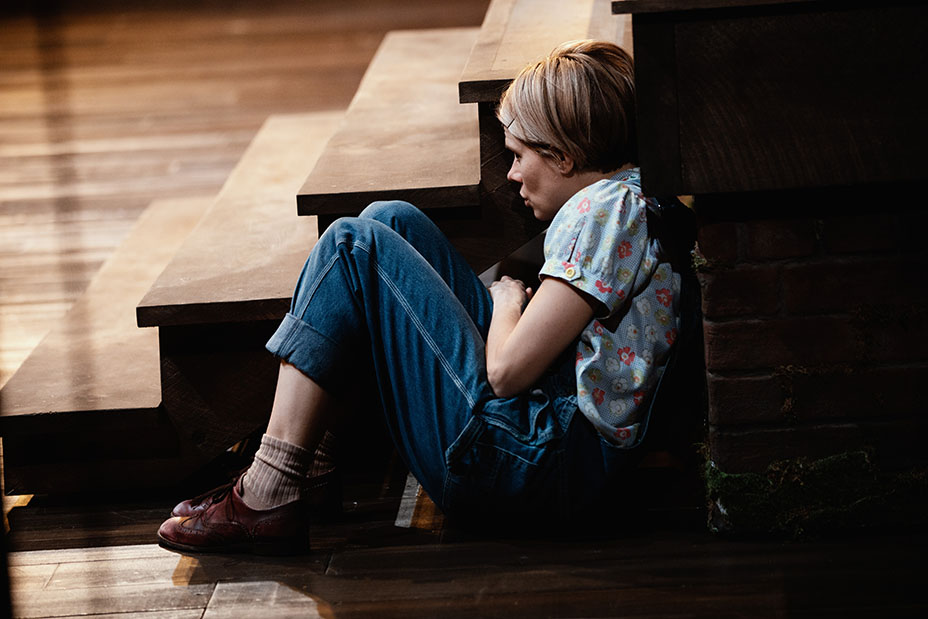 Playing Judge Taylor, an upright man of the law with a rich vein of off-the-cuff Southern humor, Dakin Matthews is hilarious, while Danny McCarthy makes Sheriff Heck Tate entirely credible in the unexpected role of a fair-minded white lawman in 1930s Mississippi. It’s in these character sketches, as much as in Atticus, that novelist Lee’s ennobling faith in human nature shines through. And the forces working against that faith are illustrated with corrosive feeling in a gorgeous scene with Neal Huff as Link Deas, a witness for the defense widely known as the town drunk, who reveals the bitter lessons of adult life in a quiet moment with Dill.

The mistake that causes Atticus’ carefully laid out case to collapse despite the exculpatory evidence in Tom’s favor is the defendant’s admission of feeling sorry for Mayella, implying a sense of superiority that no white Southern jury of that time will stand for. But the production does show sympathy for poor, dim Mayella, even when she’s angrily parroting Bob Ewell’s racist diatribes. The way the frail-looking Wilhelmi shrinks in fear whenever her volatile father is close by tells us plenty, well before Atticus puts those suspicions into damning words.

Weller is disturbingly effective as an irredeemable snake of a man, while distinguished veteran Phyllis Somerville is a wicked hoot as a different kind of dyed-in-the-wool racist, the scornfully opinionated Mrs. Henry Dubose.

Director Sher has a magic touch with this kind of quintessentially American story and characters, as he’s shown in musicals like South Pacific or plays like August Wilson’s Joe Turner’s Come and Gone or Clifford Odets’ Awake and Sing! and Golden Boy. He locates the integrity, the fallible human dimensions even in familiar archetypes, and he’s at his best when giving them space to breathe on the extended canvas of populous ensemble pieces like this one.

This is theatrical storytelling so assured and involving it’s hard to imagine anyone not being mesmerized. Sorkin has pulled off something quite remarkable by honoring Lee’s novel while remaking its events of more than 80 years ago in terms that speak directly to where we are now.