Prepare to be engulfed by a bustling crowd of beauty-seeking Kim Kardashian West fans today if you’re venturing to the Westfield Century City shopping center, where the very first KKW Beauty pop-up shop opens its doors at 10 a.m.

Donning a cream-colored off-the-shoulder vintage Dolce & Gabbana dress with her stellar beauty squad (hair stylist Chris Appleton and makeup artist Mario Dedivanovic) in tow, the reality television star and entrepreneur (who boasts 112 million Instagram followers) gave The Hollywood Reporter a sneak peek at the shop yesterday and then sat down to talk about her next fragrance, her new fervor for politics, North’s hair straightening controversy and more.

The store sells the brand’s full line of cosmetics and fragrances, including her collabs with makeup artist Mario Dedivanovic, restocks of many of the products known to sell out in minutes and three of West’s original pre-KKW fragrances: Kim Kardashian, Glam and Honey ($60 each). Individual highlighter powders and a brand new trio of Kimoji fragrances decorated with heart and fruit symbols that will launch in store next month before hitting kkwbeauty.com. 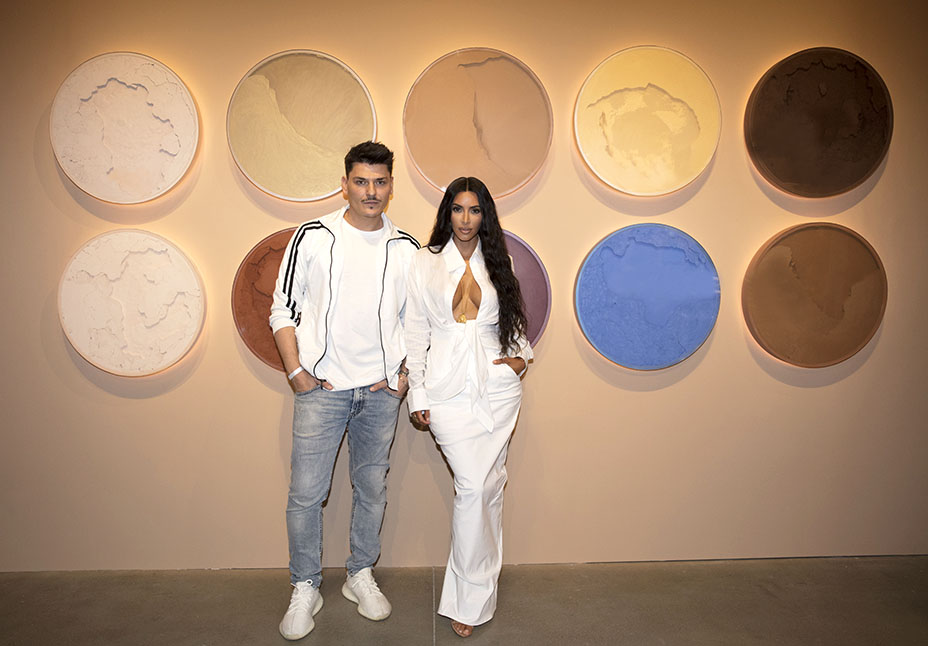 So is this the first of many bricks-and-mortar KKW Beauty locations? I hope so. I hope that the pop-up does well and that we’re able to continue to do this. I’m gonna be popping in sporadically just to see what’s going on and to meet people, and it will just be a fun experience. This is the mall I grew up coming to. I got my ears pierced here and spent so much time here, so it really is a dream come true that my first pop-up is here. We’ll see how it goes and hopefully open up another one somewhere soon.

The store design is beautiful. Who did you work with on that? I collaborated with Kanye’s team that does his tours and they did this whole thing. Images have been getting out online and all the fans are asking who designed it, so it’s really exciting that I got to collaborate with Kanye; he made the suggestion to have them do it.

Tell us about the new Kimoji fragrances launching next month on World Emoji Day. I actually have three Kimoji fragrances coming out in a few weeks and they’re launching here. That’s really exciting because I’ve never launched a product in store before! Usually there’s so much education that has to be done to sell online, which we’ll still do because it’s still online. But to have fragrance sell out when no one’s smelled it before has been really challenging and really amazing because we’ve done it! In the store, people who might not be confident about it can smell it. And I’m bringing back three of my original fragrances: the original signature Kim Kardashian fragrance with gardenia and tuberose notes, which is one of my favorites, a [fruity-floral scent] called Glam and Honey that’s more of a honey-sweet fragrance [with notes of rose and honeycomb].

And will there be new cosmetics debuting here, too? Yes. I do these powder contour Highlighter Palette kits that come with four shades in one kit, but I’ll be individually selling those as well, so you can buy the colors you like and that’s really good for traveling. 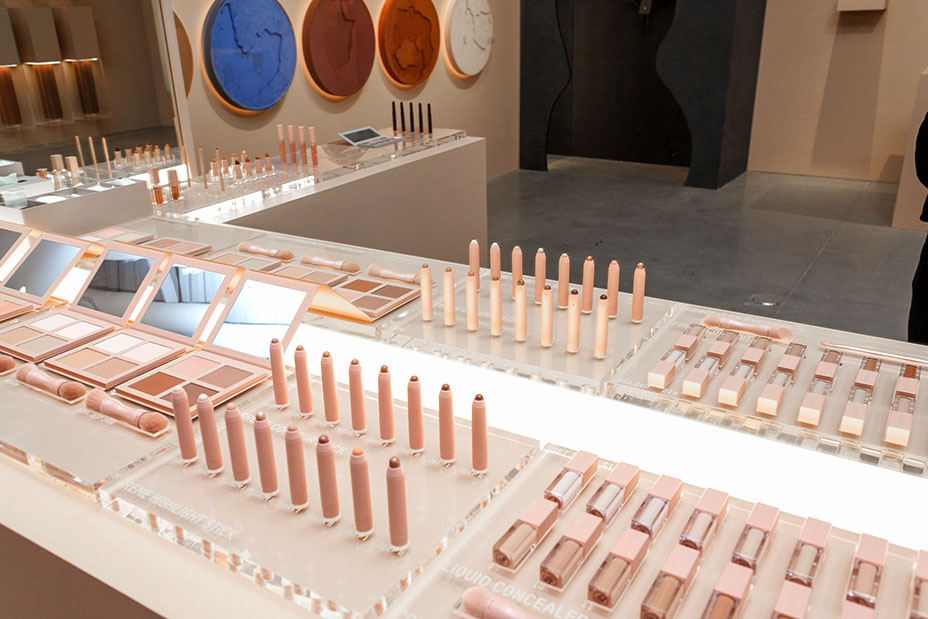 What are some of your early beauty memories — were you into it as a kid? I just remember having a Caboodle under my bed that was filled with makeup. I’d take anything my mom didn’t want any more and put it in there and that was my kit. I had no idea what I was doing, but I used to love to put on makeup, so my mom would give me stuff.

And your dad got you some pro classes when you were a teenager? Yeah, they were Joe Blasco pro classes and I still wear that [Joe Blasco Ultrabase] foundation today. I was 14 and my dad said, ‘OK, if you guys want to start wearing makeup now, you’re gonna have to learn to do it professionally, so you don’t look crazy.’ That was really cool. Then the dad of a girlfriend of mine in high school started the makeup brand Make Up For Ever, so she would bring over these crazy pigmented shadows in tons of colors. I didn’t have a job, but I would literally save my allowance money to buy makeup!

What about North? I’ve seen the Insta shots of her playing with your makeup and she had her hair straightened recently. Does she love experimenting with beauty, too? Yeah. She wanted straight hair and I straightened her hair one time. It’s funny, because online everyone thought that we pressed it and did this whole thing. It was just a flat iron. I even read that she had extensions on! She has curly hair, so when you straighten her hair, it’s gonna look really long. I can’t believe people didn’t get that. Sometimes you just have to tune it out! It was her birthday and all she wanted was to try to have her hair straightened. She and [her cousin] Penelope had a unicorn party, so I said, ‘You can do it for your party and you can do it when we go to New York if you like it.’ She liked it, so we did it when we went to New York too and that’s it. You know, I’m not gonna let her straighten her hair all the time, but if she wants it that way two or three days a year, then that’s fine with me. She loved it, but she loves her curly hair, too. Chris [Appleton], who does my hair, braided the front of her hair and put it up in a ponytail and she absolutely loved it. She loved getting pampered. She loves fashion, too. She knows what she wants to wear and what she doesn’t. She’s very vocal about it.

Is a kid’s play makeup kit in the works? Someone asked me that earlier. That’s such a cute idea. We really should do it.

Congratulations on helping Alice Johnson gain clemency and I see that now you’re advocating for death row inmate Kevin Cooper? I tweeted about Kevin Cooper. I just asked that the governor DNA test him before they execute him. It’s just a feeling. Sometimes I read something online or someone sends me something or texts me and I’ll get a feeling that I really want to help them out.

Do you see your political activism as a trend or a longer-term mission? It’s a longer-term mission for me. I never started out thinking I was being political. I just thought I was helping people and I knew that I had the opportunity or the resources, so I used them and, you know, it worked out really well for Alice. I definitely saw a lot of compassion from the White House with her and I really do believe it’s just the beginning.

Would you ever run for office? You know, everyone’s been asking me that and I said in one interview, ‘Never say never.’ And then I was like, ‘Why did I say that?’ I don’t have political aspirations. I really don’t!

Well, it’s not like you have a lot of free time, but I feel like you’re a pretty great mediator. I am a good mediator, but I don’t understand everything. I think it would be hard to jump into something like that unless you had a lot of experience. I’m definitely learning a lot.

Do you have any thoughts on the family separation issue at the border? It is really complex. It’s heartbreaking. When you see those images, it breaks your heart and I hope that it all gets resolved. You don’t want to see these things.

I appreciate how you’re using your platform to make a difference on larger issues. Political issues can be so divisive. I try to see all sides, especially after this experience [referring to the controversy over her visit to the White House]. There’s obviously a lot that we don’t agree with, but I want him [President Trump] to win. I want him to succeed, because it’s our country. It’s so crazy that everyone doesn’t want that.

KKW Beauty pop-up shop, Westfield Century City, ground floor center Atrium area, 10250 Santa Monica Blvd, Los Angeles. Customers making purchases in the first week will be entered for a chance to win an invite to a private opening party hosted by West and Dedivanovic on June 30. Hours are 10 a.m. to 10 p.m. Fridays and Saturdays, 11 a.m. to 7 p.m. Sunday and 10 a.m. to 9 p.m. Monday through Thursday through July 27.