To quote the title of an R&B hit by early ’70s girl group Honey Cone, “One Monkey Don’t Stop No Show.” Except that in King Kong, it most definitely does. In fact, that monstrous ape, able to cup an aspiring Hollywood starlet in one giant paw, pretty much is the show in this otherwise blundering musical, in which a low-wattage cast gamely trudges through one embarrassing number or cliché-ridden book scene after another. Even if the star puppet might be better suited for an arena spectacle or theme-park attraction, you can’t take your eyes off this technological marvel, not least for its incredible facial expressiveness. It’s completely appropriate that the animatronic gorilla and its operators get the show’s final bow.

This is a rare time I can honestly say that while King Kong the musical is a wretched mess, I would recommend King Kong the stage spectacle. “He’s not a film,” exclaims Carl Denham in a moment of revelation from the megalomaniacal movie director, a vanilla villain in Eric William Morris’ insipid performance. “I thought about it all wrong. He’s theater!” That might not be 100 percent accurate, but either way, the ape is simply amazing.

The puppet, a gargantuan mass of leathery skin, muscle and sinew weighing 2,000 pounds and measuring 20 feet high, was designed by Sonny Tilders, head of Creature Technology Company. That animatronics division is an offshoot of Australian production company Global Creatures, which had arena hits with Walking With Dinosaurs and How to Train Your Dragon. 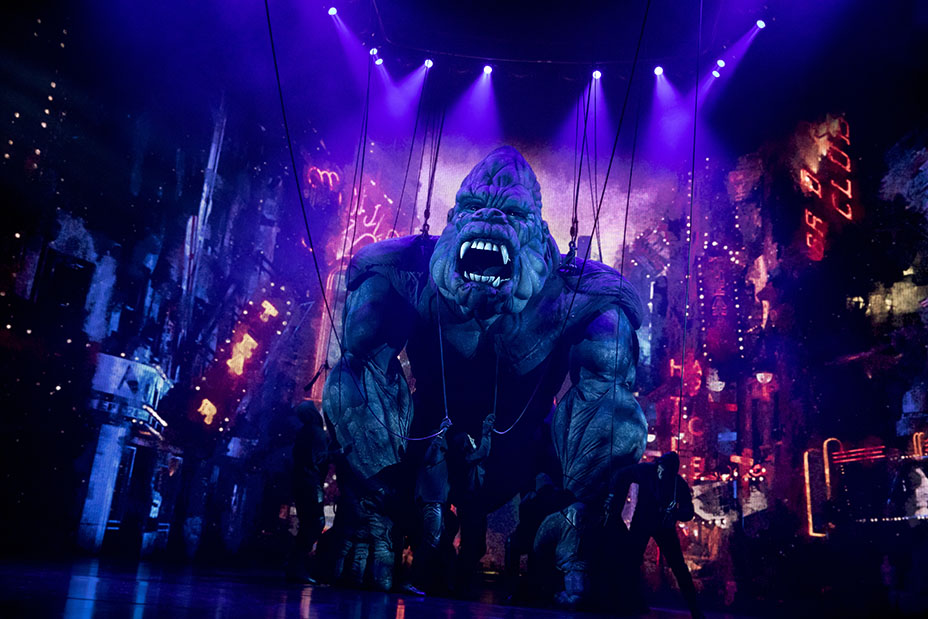 The puppet is operated by 10 nimble performers who scamper up and down the towering ape’s back, wielding his rigging ropes and jumping off his body to maneuver his huge limbs. In addition, there are three offstage “voodoo operators” controlling his body and face movements via hydraulics, one of whom also provides digitally enhanced vocal effects. An automation operator works the winches and cables to hoist the ape up into the overhead space between scenes. Gavin Robins, credited as Kong’s movement director, is the show’s behind-the-scenes MVP.

The beast is not merely impressive for its sheer size but for the pathos generated by its abuse at the hands of an opportunistic entrepreneur. Using techniques inspired by Japanese bunraku, the black-clad puppeteers are not hidden but entirely visible, as they were with the more stylized equine creatures of War Horse. Yet somehow, seeing the manpower required to give this inanimate object movement only makes it more startlingly lifelike. The range of emotions transmitted by its soulful eyes and mouth alone is astonishing. I confess that some of the more intimate interactions between Kong and Ann Darrow (Christiani Pitts), the actress who tames the beast’s heart, brought tears to my eyes.

Global Creatures has been trying to figure out how to work this stunning advance in puppetry into a stage production for almost a decade. An earlier version of the show premiered in Melbourne five years ago, with direction by Daniel Kramer, a book by Craig Lucas and a multi-source score featuring 1930s standards reworked by composer and music producer Marius de Vries (La La Land), who remains on board for this incarnation. The reaction back then will probably not be much different this time around — Puppet: Ten; Musical: Two. The clunky rewrite is the uncharacteristically crude effort of Jack Thorne (a Tony winner this year for Harry Potter and the Cursed Child), while the indefensible direction and choreography are the work of Drew McOnie. 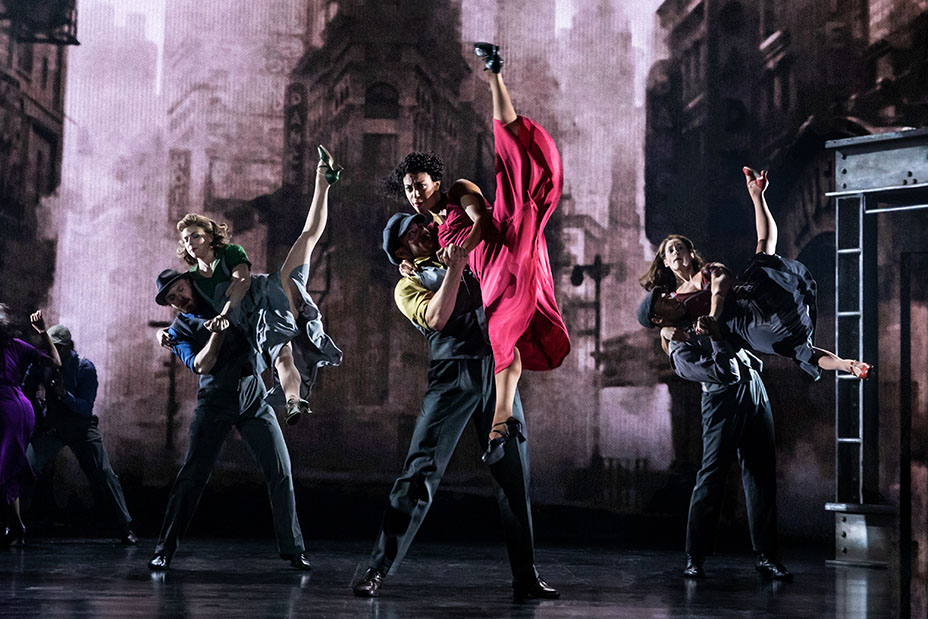 Clearly, the creative team is aware that every last audience member is there to see the ape. And you can almost feel their anxiety as they reach to fill the 40-minute buildup before Kong’s debut appearance, emerging teeth first out of the murky darkness of the Skull Island jungle in the effective slow reveal of Peter Mumford’s atmospheric lighting.

The air of manic desperation permeating the opening makes it almost a parody of a splashy musical kickoff. The show starts with a narratively overreaching succession of three numbers by de Vries and songwriter Eddie Perfect. They signal the unstoppable skyward growth of New York City (it’s 1931, the year the Empire State Building was completed) and its ever-expanding population of strivers; the arrival in town of young women like Ann, with a suitcase full of hopes and dreams; and the crushing deflation when the potential new “Queen of New York” is sunk by a series of failed auditions and ends up shivering on a Depression breadline in winter.

In terms of plotting, it makes sense. But right out of the gate, the musical storytelling is so frantically bombastic, so numbingly emphatic that it’s distancing, not involving. Exhausting, not exhilarating. And McOnie’s crazy-busy, ugly-ass choreography — mashing up period styles with aggressively modern moves as bodies go hurtling across the stage or get tossed about overhead by the overworked ensemble — is simply jaw-dropping. And not in a good way. All that frenetic movement apropos of nothing happens frequently in the show; even the jungle vines on Skull Island get a strenuous workout that makes the average Cirque du Soleil performer look lazy.

The story covers the basics of the 1933 screen original, minus the island natives, the assortment of prehistoric beasts and the human love interest for Ann, though it also owes something to the tone of Peter Jackson’s 2005 film. Nothing is made of it in Thorne’s script, but casting Ann not as a blonde in the Fay Wray tradition but as an African-American is a significant departure. 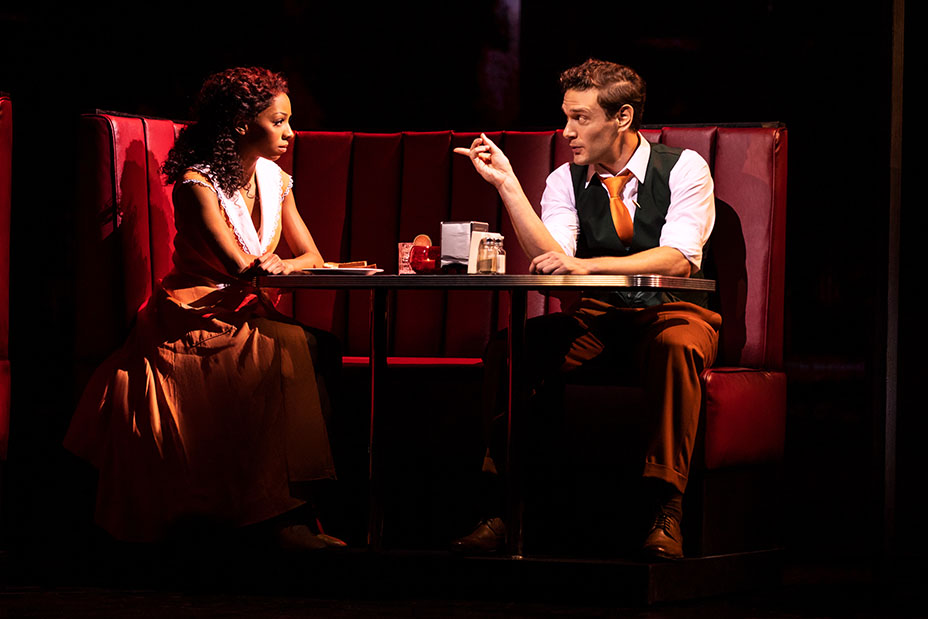 Ann, at a low ebb, meets Carl and his kindly longtime employee Lumpy (Erik Lochtefeld, touching), whom she insists on calling by his real name, Len. She gets lured along on an ocean voyage with the promise of an exotic destination and movie stardom at the end of it. The transformation of Peter England’s set into a ship’s prow — here as elsewhere using a deft combination of physical elements and projections — provides a nice visual coup. Luckily, Ann is below deck trying on glamour gowns for much of the time that the sailors, led by Captain Englehorn (Rory Donovan), are performing “Pressure Up,” a laughably macho seafarin’ number fashioned by Perfect as generic pop-rock bluster.

They hit the island amidst some kind of perplexing laser storm, and while the music and dance elements continue to underwhelm, there’s a visceral charge in the use of sound to presage Kong’s arrival. Even before Ann gets whisked off into his ape cave, the former farm girl is established as a feisty fighter, not a damsel in distress, a contemporary veneer with which the writers continue to clobber us over the head. Although Pitts is occasionally a little screechy in her vocals, she’s a captivating performer, and the developing tenderness of her moments alone with Kong gives the show some heart.

The one misstep in the big guy’s scenes, however, is a clash with a giant snake right out of the guilty-pleasure J-Lo B-movie Anaconda. Having blown the budget on a star puppet that’s a breathtaking blend of realism and theatrical magic, the mega-reptile just looks like a papier-mache Chinatown dragon, which lacks convincing autonomous movement. The creature smackdown is lame. But things get back on track once Carl and Captain Englehorn start seeing dollar signs, persuading Ann to participate in an ambush with knockout gas before they transport Kong back to New York. 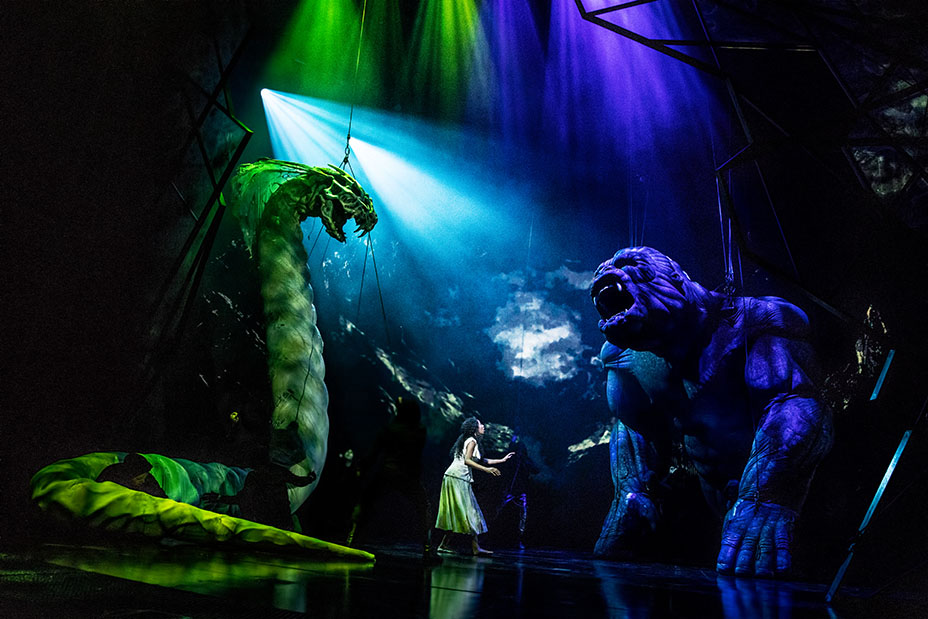 Maybe I’m a hopeless sucker for animal-in-peril tales, but seeing Kong in shackles is a wrenching image. When the ape is centerstage, especially late in the action once his traumatized refusal to eat has left him emaciated, the emotional impact is undeniable. The primo primate’s wounded vulnerability is acutely evident, along with his feelings of betrayal by Ann, and this provides welcome distraction from the ineptitude of the traditional musical elements. This is a show in which the songs never feel grounded in story or character, let alone period. The jumble of ’30s pastiche with bland contemporary pop and bad Broadway balladry has zero cohesion — it’s what the English so colorfully call “a dog’s breakfast.”

The second-act musical detours — among them the campy “Wild and Perilous Sea,” in which Carl rehearses a cast of fey chorus boys in his stage retelling of the voyage and Kong capture; and “Scream for the Money,” in which Ann wrestles with her tortured conscience — are a chore. There’s even an incongruous blast of EDM from de Vries as the marauding Kong tears through the chaotic New York streets. Though the music is a head-scratcher, the use of speedy projections to simulate the chase generates excitement. Besides, it’s worth it to see the escaped beast step out to huff and puff and roar at the audience, waving menacing paws at the folks down front.

The subsequent scene — with Kong scrambling up the still-under-construction Empire State Building while Ann clings to his shoulders, circled by planes that eventually open fire — is a climax as indestructible as it is iconic. Thorne’s script doesn’t do a lot that’s right, but he does stoke genuine emotion in the gorilla’s forgiveness of Ann, just prior to his fatal climb. There’s really nothing here to make a persuasive case that King Kong ever needed to be a musical. But if you shut out all the surrounding useless noise and just focus on the awesome beast, the story of a wild creature caged and cruelly exploited for the purposes of entertainment and greed can still hit you where it hurts.