Continue to The Hollywood Reporter SKIP AD
You will be redirected back to your article in seconds
Skip to main content
April 4, 2019 5:00pm

It’s often said that there’s no greater grief than a parent’s loss of a child, so it follows that there’s no more devastating moment in King Lear than when the monarch’s pitiless odyssey through familial betrayal, rage and madness, triggered by his own blind vanity, leaves him cradling the dead body of the one daughter whose love for him was pure. That goes double when the title character’s tragic arc is explored, in Sam Gold’s aggressively modern, gender-blind production, by the magnificent Glenda Jackson. The searing pathos of Lear’s abject diminishment seems all the more powerful given the steely authority that precedes it.

After winning a long-overdue Tony Award last season for Edward Albee’s Three Tall Women, Jackson returns to Broadway for her second encounter with Shakespeare’s crumbling sovereign, a role she first took on as her return from politics to stage acting in a different production in London in 2016. Not having seen that performance, I can’t make comparisons. But there’s definitely a sense here of long, hard investigation, of unforgiving scrutiny of the character’s narcissism, slowly giving way to aching compassion, both for his self-destructive folly and his cruel misuse by those he has favored.

Like most recent productions directed by Gold, who generally is more incisive as a collaborator on new works with hands-on writers than on classic or established texts where he’s flying solo, this King Lear will be polarizing. Gold makes a lot of audacious choices, many of which you might disagree with, but they are seldom uninteresting. This uneven production doesn’t match the taut muscularity of his brilliant Othello, with Daniel Craig and David Oyelowo, but he stages the drama with vigorous energy and bold idiosyncrasies that locate it firmly within our current unhinged world. 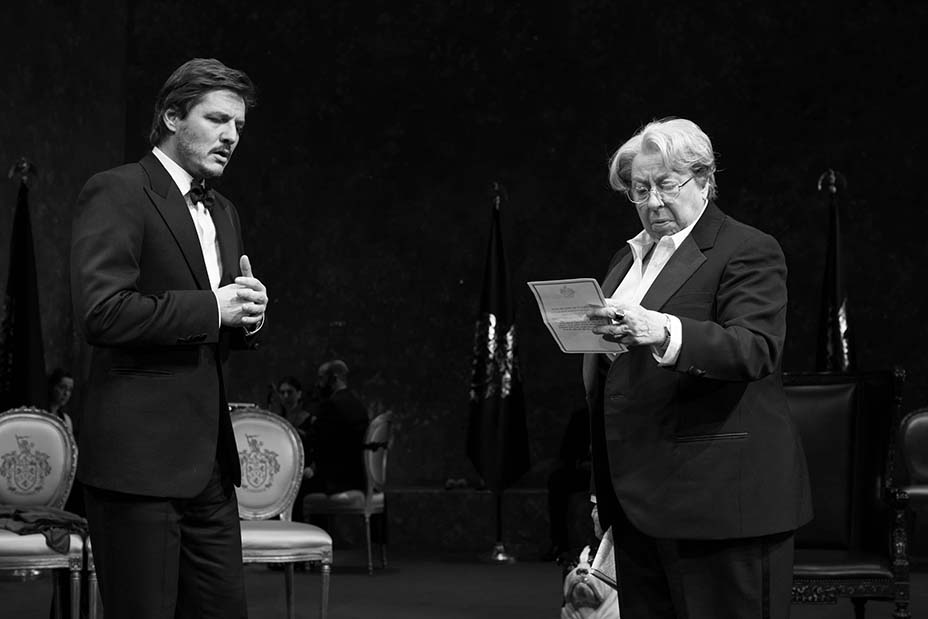 The production’s most topical theme, of political mayhem brought on by a foolhardy, insular government, is summed up by the Earl of Gloucester (Jayne Houdyshell in a performance that gets better as it goes, eventually acquiring bitter poignancy): “Tis the time’s plague when madmen lead the blind.” That line draws a knowing laugh of uneasy recognition from the audience, driven home by designer Miriam Buether’s glittering gold gift box of a set, which practically screams Trump Tower. The depiction of a rapacious First Family also seems irksomely familiar, particularly with Elizabeth Marvel’s Goneril decked out by costumer Ann Roth with the ostentatious vulgarity of a Real Housewife.

Gold at times lays on this contemporary veneer a tad too thickly, for instance having Lear’s beloved Fool (Ruth Wilson) hike up his trousers and indicate his stars-and-stripes socks while delivering his prophecy about a nation in chaos. But even with on-the-nose moments like this, the production still feels thematically undercooked.

Having the versatile Wilson double as Cordelia and the Fool turns out to be one of the more inspired touches, and not just for the jaunty Chaplin-esque physicality and Cockney cheekiness she brings to the latter. Shakespeare was infinitely kinder here about fathers and sons than fathers and daughters, but with the Fool wearing the same face as the banished Cordelia, the doting paternalistic affection Lear shows for the jester becomes quite affecting. The Fool’s sardonic mockery is not unlike Cordelia’s outspokenness, but while the king is amused by one, he brays with indignation at the other. 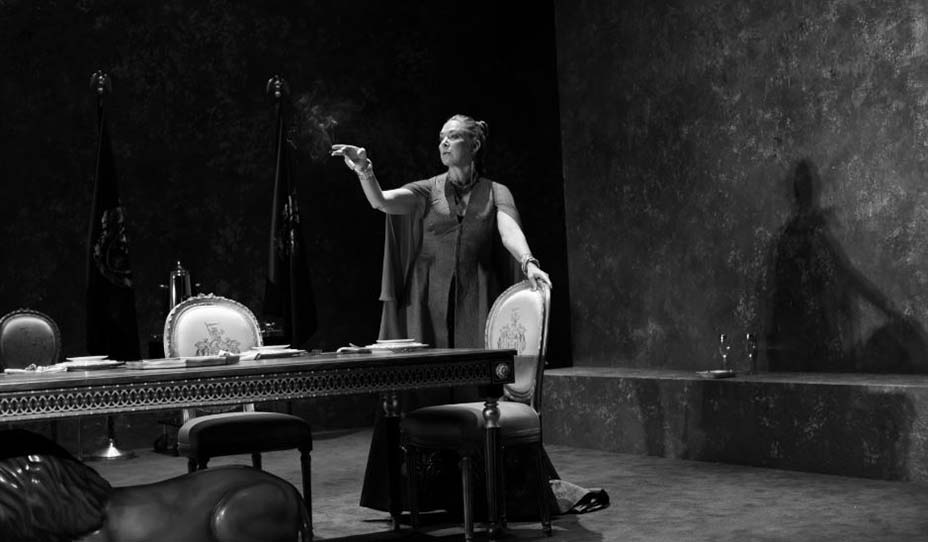 In the opening scene at court, when Lear declares that he will divide up his kingdom among his daughters, apportioning the land according to the depths of love and devotion they profess, Wilson makes Cordelia almost smug. She appears removed from it all, refusing to pander to the old man’s egomaniacal demands or to hide her disdain for her sisters’ fawning insincerity. She’s not a saint unable to lie here so much as a self-possessed woman governed by pride. But when she reappears near the end, as much a soldier as any man in the French army, she softens instantly at the pitiful sight of her father, stripped of his dignity and his senses. Her sorrow directly echoes that of the Fool, who watches bereft as the monarch’s wits get blown away in the storm.

About that storm. Gold certainly conjures up an arresting atmosphere with help from Jane Cox’s lighting, Scott Lehrer’s sound and a churning original score by Philip Glass that competes with the percussive thunderclaps achieved when bodies are dashed against the metallic curtain. It’s theatrical yet quite removed from Shakespeare’s thematic grounding of the play in Nature, and man’s place in it. The sense of Lear becoming increasingly lost in the wilderness is, well, lost.

Even the choice to show the aftermath of the storm as a demolished version of the royal court set, with gilt-and-brocade chairs overturned amid the wreckage, shifts the play away from the natural world and into the narrower frame of a political dynasty cannibalizing itself. It’s juicy — a bit too much so in a cringe-inducing moment that has Goneril and the Machiavellian Edmund (Pedro Pascal) humping in the rubble, going at each other like horny high schoolers in the car park on prom night — and generally compelling. But it somehow makes the play seem smaller, even at an unhurried three-and-a-half hours. 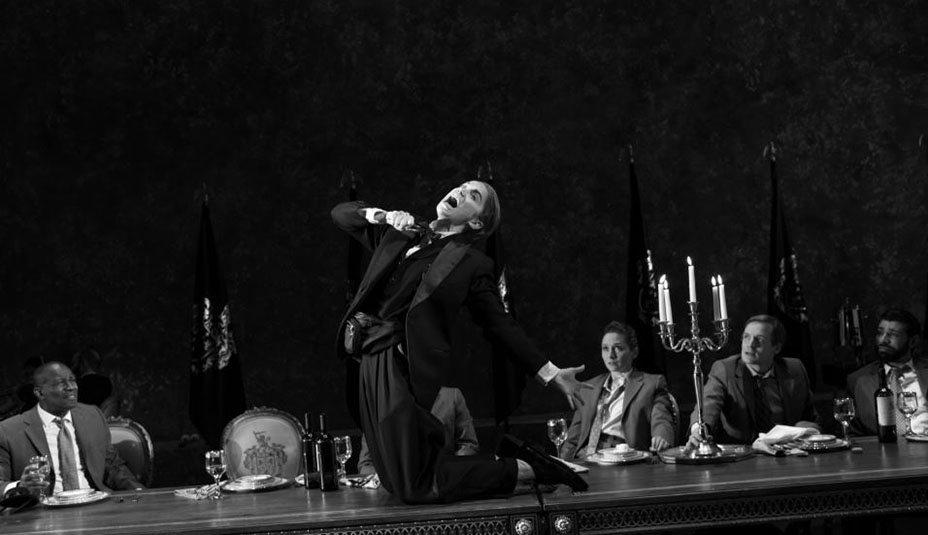 Still, while the ensemble doesn’t feel unified, there are some standout performances, Pascal’s terrific Broadway debut as Edmund among them. The bastard son of Gloucester simmers and schemes as he incriminates his good brother Edgar (Sean Carvajal), the favored legitimate son, and then betrays their father, with horrific results. Pascal doesn’t overdo the resentful villainy and yet he’s malice incarnate. That makes his complete repentance while on the brink of death all the more of a stretch, but he somehow imbues the turnaround with emotional authenticity.

Carvajal at first seems hesitant and unsure as Edgar, and when he goes into hiding as the dirt-smeared, half-naked lunatic who identifies himself as “Poor Tom,” there’s a broad pantomime quality to his performance. But when he’s reunited with Houdyshell’s Gloucester after the latter has been viciously blinded by Regan (Aisling O’Sullivan) and her husband, the Duke of Cornwall (Russell Harvard), the tenderness between them strikes plangent chords, even as Gloucester fails to recognize the son whose love he doubted. The emotional undercurrents of those scenes and others are enriched by the melancholy strains of Glass’ otherwise overused score, played by a formally-attired onstage string quartet whose placement at times seems to be a headache for director Gold.

Having Cornwall played by a deaf actor further pulls the play into an inclusive contemporary realm, although the tremendously gifted Harvard is mostly wasted. He rocks a kilt, but has little to do until a scene or two of unbridled fury late in the drama. But it was a clever touch to make Cornwall’s aide and sign-language interpreter (Michael Arden) the servant who rebels against his master’s cruelty, leading to both their deaths. 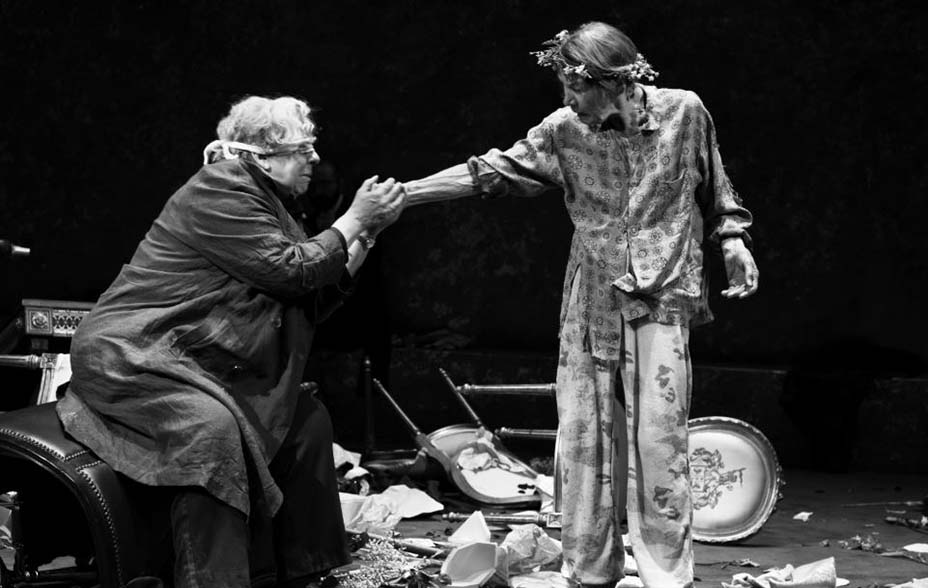 Neither the dependable Marvel nor Irish actress O’Sullivan brings much in the way of startling new shadings to Lear’s ingrate offspring Goneril and Regan. But they become quite entertaining once they fire up and release all their venom. Marvel works a long top-knot braid like a serpent’s tail, especially as she pours withering scorn on her husband, the Duke of Albany (a solid Dion Johnstone).

There are more consistent pleasures in John Douglas Thompson’s Earl of Kent. This superlative actor played the same role and wiped the floor with everyone else on the stage in a lackluster 2011 Public Theater production with a miscast Sam Waterston in the title role. Here, Thompson’s effortless command of the language, and his ability to convey the inherent goodness of the steadfast Kent without undercutting his virility make him a magnetic presence. His acceptance at the end of approaching death (“I have a journey, sir, shortly to go. My master calls me, I must not say no”) is quietly stirring, in line with a man who puts duty before self.

Like Gold’s eccentric Hamlet with Oscar Isaac, the suspicion arises here that the director is throwing everything at the wall to see what sticks. Occasionally, the results are stunning, such as the sharp shock of Cordelia’s death, which usually occurs offstage, presented here with a brutality that amplifies the pathos of the broken king. But just as often the clutter saps the production’s cohesion and clarity.

Still, for all its weaknesses, the staging is never dull. And watching Jackson is a reward in itself. She’s by no means a Lear for the ages, and perhaps couldn’t be in such a scattershot production. But, whether striding about the court in a tuxedo, wandering the stormy heath in floppy pajamas, or rescued by the French and clad in a chic brown suit they just happened to have in her size, Jackson’s tiny, bird-like physique seems to contain supernatural reserves of stamina. Her technique remains impeccable at 82, and the harsh serrated edges of that diamantine voice could draw blood.