The 1953 photos of Kirk Douglas and Brigitte Bardot frolicking on the beach — semi-spontaneous, semi-staged — captured the combination of American masculinity and European sexiness that defined post-World War II cinema and were seen around the world. Despite his obvious affection for Bardot, Douglas, then 36, was falling in love with Anne Buydens, then 34, who had just joined Cannes as the head of protocol. In this excerpt from their new joint memoir, Kirk and Anne: Letters of Love, Laughter, and a Lifetime in Hollywood, the pair, who married in 1954, recall meeting in Paris in early 1953 and their time together at Cannes that year.

ANNE My friend Anatole Litvak, the director of Act of Love, convinced me to meet with Kirk, who was anxious to hire a bilingual assistant who could also handle his personal publicity. Kirk had already gotten quite a reputation in his first few weeks in town. The press had dubbed him “Le Brute Cheri,” the darling brute, and he was photographed with a succession of stunning women. I was sure this would be a courtesy interview. I had signed a three-year contract to handle protocol for the Cannes International Film Festival starting in April.

KIRK I was fascinated by the lovely young Parisienne who sat in my dressing room, her slim ankles crossed under her a la mode blue suit. Within minutes, I offered her the job. She took only seconds to turn me down in her impeccable English. I was not used to rebuffs. A few hours later, in my most seductive tones, I called Anne to invite her to dinner at the romantic La Tour d’Argent. “Thank you, but I’m tired. I will just make some scrambled eggs and stay in tonight,” said the voice on the other end of the phone. I was shocked and annoyed. I was determined to change her mind— at least about the job. I sent emissaries: Litvak, Irwin Shaw — Act of Love‘s screenwriter who remembered her from The Young Lions — and Anne’s friend, [photographer] Robert Capa. She finally agreed to work with me on a trial basis, making it clear our relationship would be strictly business. We spent a lot of time together. Anne was efficient and had a wicked sense of humor. Everyone liked her — much more than they liked me! We often spoke in French, which I was studying. With no romance in the picture, I stopped talking about myself and trying to impress Anne. Instead, I began to listen to her. She had told me very little about her background; I didn’t even know that she spent her early years in Hitler’s Germany. 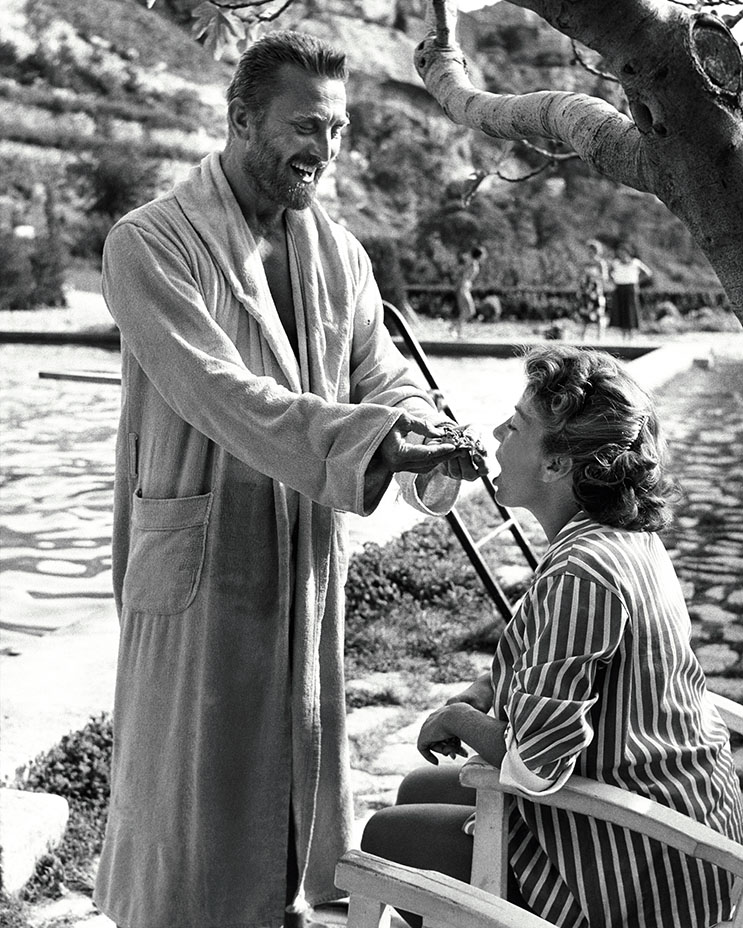 ANNE Kirk was invited to the annual charity gala at the Cirque d’Hiver, the famous Winter Circus. He wanted me to accompany him. We had been working through the afternoon at his lovely apartment near the Bois de Boulogne when he started asking me questions about my life. I was always reluctant to talk about myself, particularly as so much of my past was painful. Kirk was an attentive listener, and I found myself being very honest. I even opened up about my rift with my father. We talked for hours. I had a strange feeling in my heart that I could fall in love with this man. I didn’t want to, because I had seen too many young women enter into intense affairs with visiting movie stars — Dean Martin, Marlon Brando and Cary Grant among them. Then the film wrapped and the men returned to their wives and families. At the circus, the producers spotted Kirk coming in. “You must participate.” I took my seat, wondering what he would do with no preparation. After the elephants left the arena, there was the tuxedoed Kirk — the popular Brute Cheri — pushing a giant pooper-scooper of a broom across the ring to great hilarity. How could I resist a man who could laugh at himself? We went back to his place for a nightcap, which turned into something more.

KIRK As things became more serious with Anne, I warned her not to expect a commitment. I was secretly engaged to [Italian actress] Pier Angeli, I told her. I could have saved us both a lot of anguish if I had used my new fluency in French to read the movie magazines. Anne knew, but never breathed a word, that Pier was constantly in the news, always with another man at her side. My next picture would be filmed in Italy, so I was sure that would all change. The two producers of Ulysses, Dino de Laurentiis and Carlo Ponti, were going to Cannes in April, and I would meet with them there. They had already hired Anne Buydens to do the unit publicity for the picture. 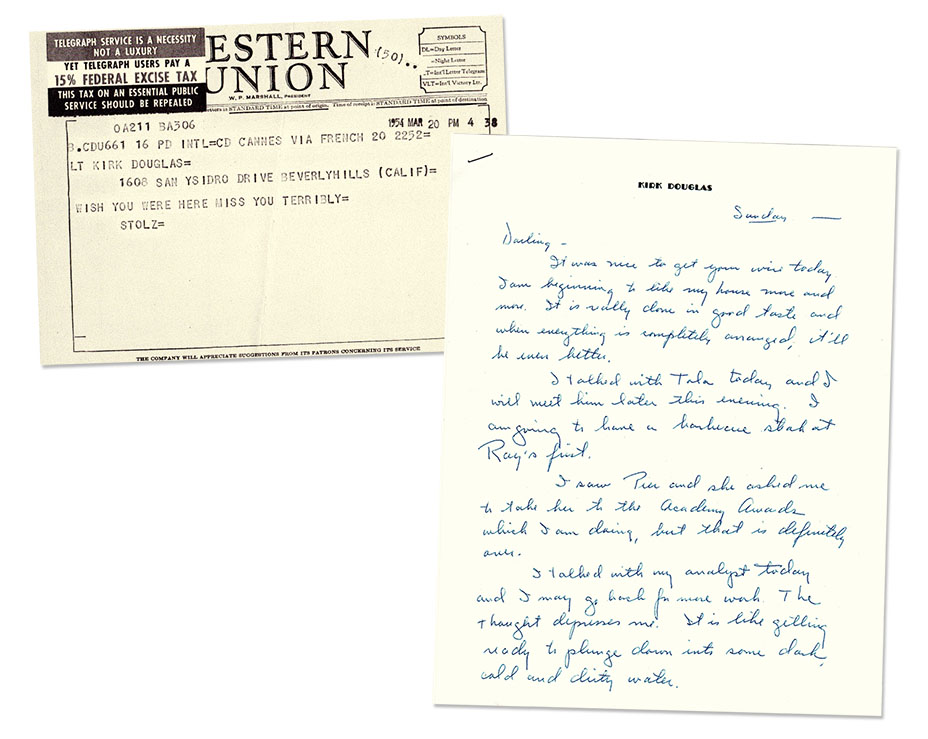 ANNE I was glad Kirk was in Cannes, though I didn’t have much time for him. In the midst of everything, [Hotel Bel-Air owner] Joe Drown arrived from California and insisted on taking me to dinner. It was a disaster. Joe got drunk and gambled heavily. I left him and called Kirk, who was next door at the Carlton. He had been asleep. “How was your evening?” he asked. I burst into tears. “Just awful … and it’s my birthday.” “I’ll get dressed and take you out,” he said. We went to a small cafe near the beach, and he turned my tears into laughter.

KIRK Ponti invited us to his villa in the hills above Amalfi. We had a wonderful, romantic holiday in an ancient tower that served as their guest quarters. During that magical week, Anne and I would set off in a little rowboat. She would row; I would sing her Italian love songs …

Excerpted with permission from Kirk and Anne: Letters of Love, Laughter, and a Lifetime in Hollywood by Kirk and Anne Douglas with Marcia Newberger by Running Press, May 25, 2017. © The Bryna Co.