The 1948 Broadway musical Kiss Me, Kate endures as one of the most infectious backstage comedies in the canon, notable for the ingenious intertwining in Sam and Bella Spewack’s book of the antics of a pair of preening ex-spouses going head-to-head in a production of The Taming of the Shrew and continuing the fight in their dressing rooms. Even more essential to the show’s success is the fabulous, deftly integrated Cole Porter score, with lyrics that include some of the composer’s wittiest wordplay and cleverest rhymes, often pegged to explosive melodies that fuel a handful of exhilarating dance numbers.

The show is the very essence of giddy postwar light entertainment; it won the first-ever Tony Award for best musical and ran for more than 1,000 performances. Even in an imperfectly cast revival like the new Roundabout production, it’s virtually impossible not to surrender to its boisterous charms.

Part of the challenge for director Scott Ellis and his principals, Kelli O’Hara and Will Chase, is overcoming the vivid memory, for many of us, of Michael Blakemore’s superb 1999 revival. That was a deep dish of unapologetically over-the-top theatrical hijinks in which the outsize egos of actor-director-producer Fred Graham and his ex-wife and leading lady Lilli Vanessi — embodied by Brian Stokes Mitchell, in lustrous voice, and the late Marin Mazzie at her most sublime — left no piece of scenery without teeth marks. The leads’ chemistry, in both the romance and the farce, was irresistible, whereas here, they seem a little out of sync. 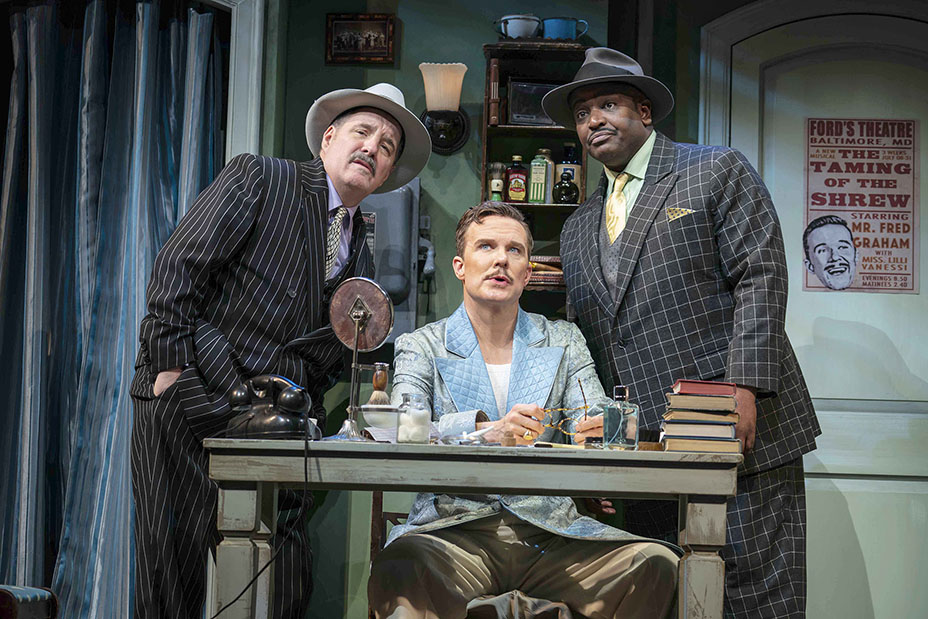 That’s partly because approaching the show 20 years later is a trickier proposition, given the seismic shift in attitudes toward gender disparity and the arcane endorsement of patriarchal dominance in the Shakespeare play, which comments on the main action and vice versa. Ellis’ solution, aided by minor rewrites from Amanda Green and the downplaying of any undignified buffoonery by O’Hara, is to realign the balance and put Fred and Lilli on more equal footing, along with Petruchio and Kate, their characters in the musical version of The Taming of the Shrew, trying out in Baltimore.

For the most part, these readjustments are fairly discreet. The most conspicuous tinkering happens in Kate’s final song in the play-within-the-play, lifted directly from Shakespeare and formerly titled “I Am Ashamed That Women Are So Simple.” The word “people” is substituted for “women,” with Kate no longer admonishing her sisters to “serve, love and obey” but instead calling for peace in all unions by abandoning any notion of supremacy on either side. And rather than being slung over Petruchio’s knee and spanked, she doles out as much, or more, physical punishment as she receives in the amusing fight scenes. The production’s poster art goes further still, placing a triumphant Lilli atop a heap of male Shakespearean players, with Fred glowering down below.

If the changes dampen some of the show’s comedic vitality in order to make it palatable to contemporary sensibilities, so be it. There are corresponding losses and gains, too, in O’Hara’s performance. One of America’s most incandescent musical-theater stars, her default setting is elegance, warmth and sincerity, so the soupcon of campy self-intoxication that seems a requirement of the role is largely missing. This is not the harrumphing hysteric that audiences familiar with the show will remember.

But O’Hara is enough of a pro to put across Kate’s furious tirade, “I Hate Men,” with feisty spirit, and when she unleashes her crystalline soprano on one of Porter’s most ravishing romantic ballads, “So in Love,” any reservations about her casting are forgotten. 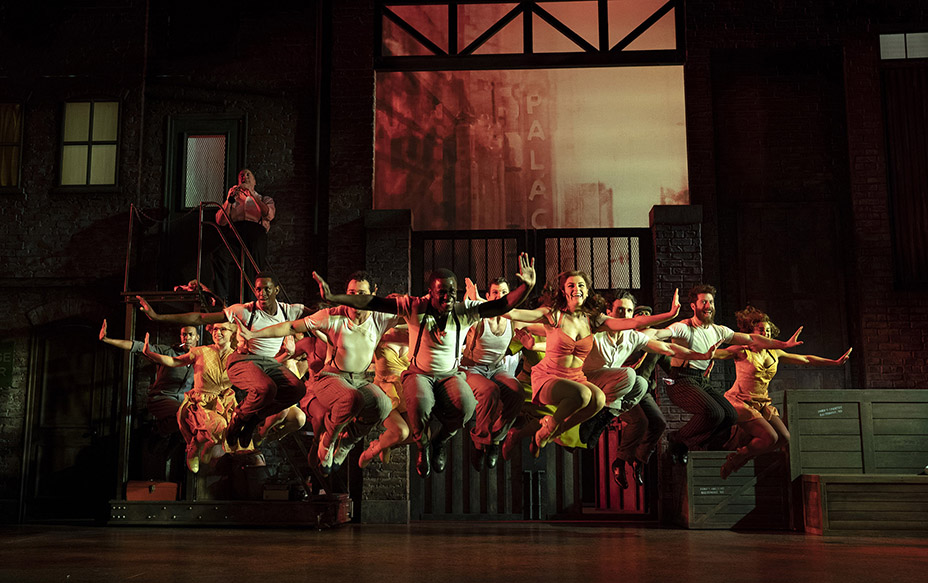 Lilli remains a pampered diva who went from Broadway success to the screen and has returned to the stage once Hollywood tired of her tantrums. But O’Hara makes her a more grounded character whose natural domain is the theater. That connection, deep in her bones, is reinforced in a lovely closing embellishment added for this version, in which Lilli shoots a fond glance over her shoulder at the stage, empty save for the ghost light, as she exits the building.

Chase is more of a mixed bag, playing it considerably broader than his co-star. Fred has traditionally been sung by rich baritones like Mitchell or Alfred Drake, who originated the role, or even bass-baritones like Howard Keel, who did the 1953 movie. Chase is a tenor, and while he can stretch into the bari-tenor range with a voice not lacking in power or suppleness, the lighter timbre makes him seem short on authority. Again, that may be part of a conscious choice to tone down the machismo and smooth away the show’s misogynistic edges, but the actor is a medium-sized presence in a big role.

His most challenging vocal showpiece is Petruchio’s “Where Is the Life That Late I Led,” and while Chase can’t hide the effort required to conquer Porter’s tongue-tripping verses, he gets through them confidently enough.

There’s a more even balance in the show’s delightful secondary couple, company members Bill Calhoun (Corbin Bleu) and Lois Lane (Stephanie Styles), who play Lucentio and Bianca in the Shakespeare production. Bill’s gambling habit causes trouble when he forges Fred’s signature on an IOU, and Lois isn’t exactly exclusive in her affections. But their sweet understanding and willingness to overlook each other’s peccadillos comes across playfully in numbers like “Why Can’t You Behave,” “Always True to You in My Fashion” and “Bianca,” which is one of the score’s weaker songs but bursts into life as Bill trades words for movement, expressing himself in a euphoric tap dance that has him clacking up a metal staircase and then flipping upside-down to click his heels on the underside of the landing above. Bleu is such a dynamite performer you can’t help but share the joy rolling off him as he dances. 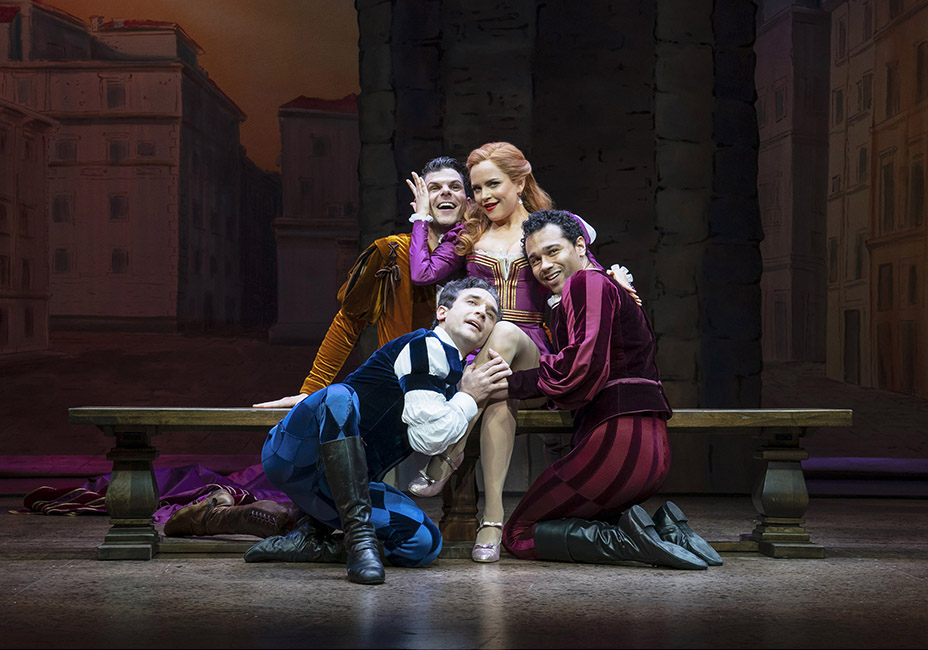 Choreographer Warren Carlyle, as always, has a smooth handle on the period moves, nowhere more so than in the sizzling show-stopper that opens Act II, “Too Darn Hot.” The number begins with a solo clarinetist blowing out a few lazy bars on stage. Then, led with effortless vigor by James T. Lane, it builds progressively into a wildly athletic ensemble display, incorporating elements of tap, swing and jazz. There’s also a marvelous smaller-scale dance number in Act I, when talented newcomer Styles throws herself into frisky Bianca’s negotiation with three potential suitors in the bouncy, innuendo-laden “Tom, Dick or Harry,” as Will Burton, Rick Faugno and Bleu ricochet hilariously all over the stage trying to impress her. It’s the comic highlight of the show.

One of the weaker links of the cast is Terence Archie as Lilli’s politically ambitious military-man fiancé Harrison Howell, making their duet on “From This Moment On” (a song added for the movie and awkwardly interpolated into revivals) a misfire. And as the gangsters who come to collect on Bill’s debt and get bitten by the classical-theater bug, John Pankow and Lance Coadie Williams have the Damon Runyon-esque delivery down, though their timing and diction on the vaudevillian “Brush Up Your Shakespeare” could use more work.

But this is an immensely pleasurable show even in a production that occasionally lacks spark. The enjoyment is enhanced by David Rockwell’s sets, from the backstage area and dressing rooms to the old-fashioned painted flats and backcloths of the Baltimore run; by Jeff Mahshie’s colorful costumes, with some gorgeous outfits for O’Hara; by Donald Holder’s vibrant lighting; and Larry Hochman’s sumptuous orchestrations for 15 musicians, led with customary finesse by Paul Gemignani.