For Rian Johnson, Knives Out arrives like a light sorbet between the heavy meals of his Star Wars gigs. Johnson, 45, wrote and directed the ensemble murder mystery featuring Daniel Craig, Chris Evans, Jamie Lee Curtis, Ana de Armas and Michael Shannon, in the downtime between helming The Last Jedi and revving up a new trilogy set in a galaxy far, far away. The universe of Knives Out, which hits theaters Nov. 27 via Lionsgate, is light-years from that of Luke and Leia, and will resonate with anyone who’s familiar with Agatha Christie-style whodunnits: The dysfunctional family of a wealthy crime novelist (Christopher Plummer) gathers in his dusty mansion to celebrate his 85th birthday. When the birthday boy turns up dead, a master detective with a foreign name (Craig as inspector Benoit Blanc) is called in to investigate.

Why did you want to make an old-school whodunnit?

I just love them. I’ve actually been a big Agatha Christie fan since I was quite young. I don’t want to give too much away, but this movie was my attempt to get everything I love about Agatha Christie up on the screen while doing some new genre mechanics that seemed interesting. And doing something with it that people maybe haven’t seen before.

What are the particular challenges with this kind of movie?

Well, I think ultimately it is a genre I love. I’m a sucker for any whodunnit. I love the recent stuff that has been out there. I loved the [Kenneth Branagh-directed] Murder on the Orient Express last year, I had a blast watching that Adam Sandler one that just came out [Netflix’s Murder Mystery]. So I love it all. But I do kind of fundamentally agree with Hitchcock’s take on the genre, which was that it is all based on a surprise at the end, which is kind of the cheapest coin. He was very much a proponent of suspense as opposed to mystery. And there is something about the way that that, as an engine, drives a movie that I do agree with. Different kinds of mysteries have attempted this in different ways, and Agatha Christie would always put some different engine, other than just whodunnit, into each of her books. The challenge is basically creating a compelling story so you are not just waiting for the reveal at the end. So that you are actually caught up in something emotionally.

You’ve been building size and budget with every film you’ve done, from Brick in 2005, a tiny independent film, to the megalith of The Last Jedi. What was it like downshifting again — to a midbudget, $40 million film?

In one sense it was fun to just switch into another mode. But in another it is just about the requirements of the project. On one hand a big movie like The Last Jedi is a completely different beast, but on the other hand it is really the same essential work, you are just trying to shoot a compelling scene and work with the actors and get the best out of them. So the basic ingredients are the same. But it was fun being a little closer to the ground and having the elements of time hunching over our shoulder in a way that you just don’t on a massive movie. That was actually fun.

After the intense pressure and fan scrutiny that came with The Last Jedi, did you feel you could cut loose with this movie?

Oddly no. That’s a credit to all the folks at Lucasfilm and Disney. I felt very free with The Last Jedi. It felt creatively rewarding in the same way this did. It wasn’t like, ‘Oh, finally the handcuffs are off.’ But it was a different animal. And one thing I really had fun with is how dialogue-based this movie is. Especially with these actors, it was so much fun — as opposed to in a Star Wars movie. I had done a few films that lent themselves to just economy of words and a very sparse dialogue style. It was really nice to get back to writing dialogue that was a bit more florid and gave the actors something to really sink their teeth into. 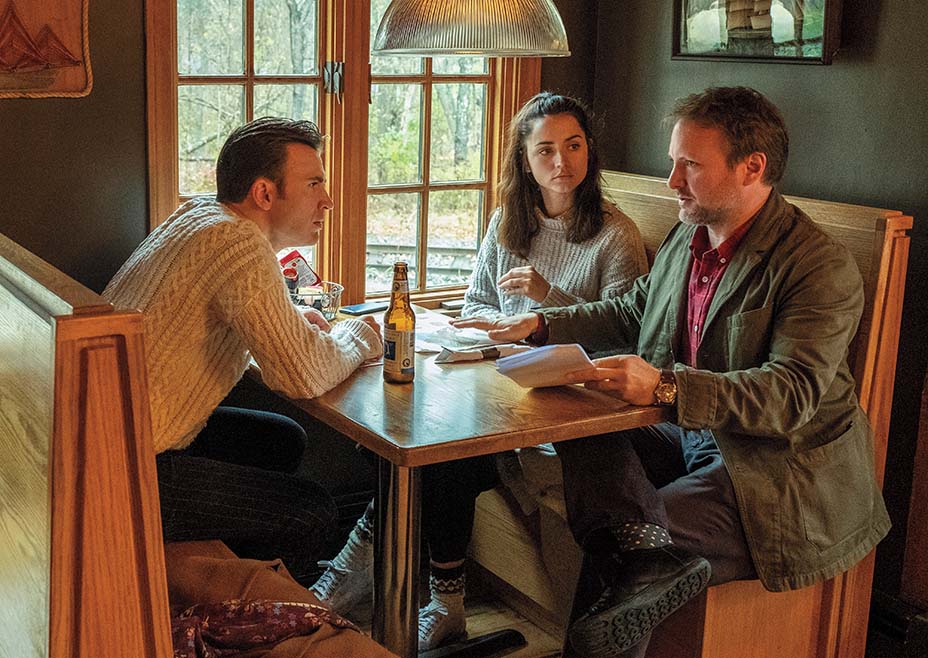 Am I right that you cast Daniel Craig first, in the Hercule Poirot-style role of Benoit Blanc? That looks like casting against type.

Yeah. Well obviously I had seen him, and loved him, in the Bond movies, but I’d also seen work he had done on the stage. His work in Lucky Logan I thought was incredible. I just knew he was an incredible actor who had a phenomenal range. And from just socially meeting him a few times I knew he was quite funny. And then there was a scheduling thing where the Bond movie pushed a few months. He suddenly had a window and we jumped right in there and were off to the races.

All your casting choices in this film seem to cut against type. Chris Evans’ character (Ransom Drysdale) seems an almost anti-Captain America.

Well I’m always looking to surprise myself, especially if I know somebody is a terrific actor with, again, great range — which Chris Evans obviously is. Or Michael Shannon. Or everyone here. They have incredible chops. For me it is just much more fun to say, “I wonder what it would be like to see them in this role that I haven’t seen them in before.” Like Michael Shannon for instance. He very often plays very strong, heavy characters, and to let him have a little more fun and to put him in the role of this younger brother, this slightly pathetic, slightly weaker character, it was really fun for me to see him sink his teeth into that.

The whodunnit is a genre that’s been heavily parodied and done to death on TV. How difficult was it to balance the humor and the gravitas required for people to buy into the story?

That was really important. On one hand the fun of it all is an essential element. And what I was really aiming for was not just the Agatha Christie books but the movies I grew up watching, with Peter Ustinov as [Hercule] Poirot — those always had a sense of play to them. But on the other hand, you’re right. I was very clear that this was not going to be a parody or a comedy. And so it’s just a matter of balancing, making sure it doesn’t get too arch. And also constructing the story so it is not just a movie about murder mysteries, but it does actually have an emotional peg to hang your hat on.

This film came together very quickly. That’s surprising because this is the kind of film — an original script, not a horror movie, with a substantial budget — that is almost impossible to get made in the independent space right now.

I’ll be honest: It came together very, very quickly. Obviously we had the wind at our backs for a number of reasons. We were coming off of Star Wars. The biggest thing was when Daniel signed up for it. Then everything clicked into place very quickly. But even before that, MRC [the independent studio, which shares a parent company, Valence Media, with THR] — we had wanted to work with those guys for a long while, and they were very passionate about it. They were on board from the script stage. It’s always a miracle when everything gets made. This is just one of those crazy moon shots where it all snapped together.

To give you an idea: I’d been planning about the script for like a decade. I sat down to write it in January [2018], and we had it wrapped by Christmas. My head is spinning at how fast this happened. I’m not used to that, and I won’t get used to that. This was a freak-of-nature occurrence, but it was fun.

You seem, with every film you do, to switch genres, from film noir (Brick) to sci-fi (Looper) to space opera (The Last Jedi) to, now, a whodunnit.

I just love genre. I love it as a viewer, and as a story-teller it gives you a chess board to play on. It gives you a shared grammar with an audience. And it gives you a set of expectations to work with in terms of the audience’s experience.

Besides that, so much of the cinema I grew up loving was these different genres, and the conventions of them are something I hold dear to my heart. There is always something fun about figuring out how to satisfy the basic pleasures of the genres while doing it in a way that people don’t quite expect.

You’ve made a career out of confounding fan expectations. What advice would you give other directors on how to deal with critics?

The best advice I give myself, all the time, is ultimately you just have to do what is interesting and exciting to you. The instant you get your head in any other place, whether you are thinking, “People are expecting this, so I’ll do it,” or even worse, if you are thinking, “People are expecting this, so screw them, I’ll do the opposite” — if that is the place from which you are making creative decisions, I don’t think that’s a great place. Ultimately I think you just have to ignore that as best you can. Just be in your own head and do what seems to be the most fun thing to do next. Like Joseph Campbell says: “Follow your bliss.”

This is part of the interview where I’d ask what you are doing next, but since I think we all know what you’re doing next, I’ll skip over that and ask: Is there any genre you haven’t tried that you still want to? Is there a musical in your future, or a rom-com?

Oh yeah, I would love to do a musical. I’m a huge, huge broadway musical fan. That is on the list. My composer, Nathan Johnson and I, every once in a while we will have a few drinks and talk about it. It is something that is definitively in the air.

The rom-com is fascinating because I love that genre and that is a genre with very specific rules — more so than maybe any other. It is fascinating, the rigidity of the form of the rom-com, and that presents a really interesting challenge. I love a good rom-com. I don’t know if I have the skill set to do one, but it sounds like fun. 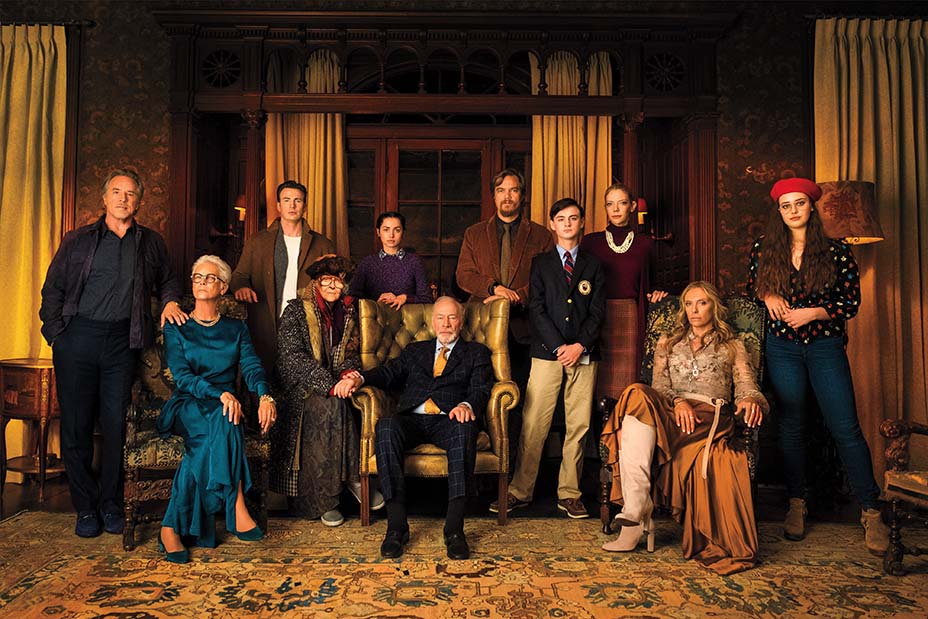 A version of this story first appeared in the Sept. 4 issue of The Hollywood Reporter magazine. To receive the magazine, click here to subscribe.