Continue to The Hollywood Reporter SKIP AD
You will be redirected back to your article in seconds
Skip to main content
February 6, 2020 10:00am

Oscar-nominated for his original screenplay for Knives Out, writer-director Rian Johnson created one of the most viral style moments of the awards season. “Ransom’s sweater,” says Johnson, 46, referring to Chris Evans’ character’s cozy Aran Islands-style pullover, which launched a thousand memes. “I told [costume designer] Jenny [Eagan] to put holes in the sweater. The character has really nice clothes that he kind of treats like trash.” Even so, the sweater stood out. “My wife, Karina, came to the set one day and Chris walked in and she paused a second and said, ‘That’s a good sweater.’ I should have had a tip-off. No one rocks a sweater like Chris.”

Jada Pinkett Smith Hopes Will Smith, Chris Rock Have "Opportunity to Heal" and "Reconcile" After Oscars

Johnson — who is married to You Must Remember This podcast host Karina Longworth — says he took extra care in dressing his cast for the murder mystery, wanting each character to have a distinct look, “almost like the characters in the game of Clue [but with] the feel of the modern world. That was really fun.”

“It’s similar to what we’re talking about right now,” adds Johnson, who met with THR‘s style contributing editor, Andrew Weitz, on Jan. 23 to figure out what to wear on Academy Awards night. Johnson admitted that he was undecided about whether to go a “traditional” route — “That’s my tendency for something like the Oscars,” he says — or edge outside his comfort zone. “As I’ve gotten a bit older, I’ve just gotten more and more into clothes, and it was fun getting together with someone who knows so much and trying on some things that I wouldn’t necessarily have considered.” 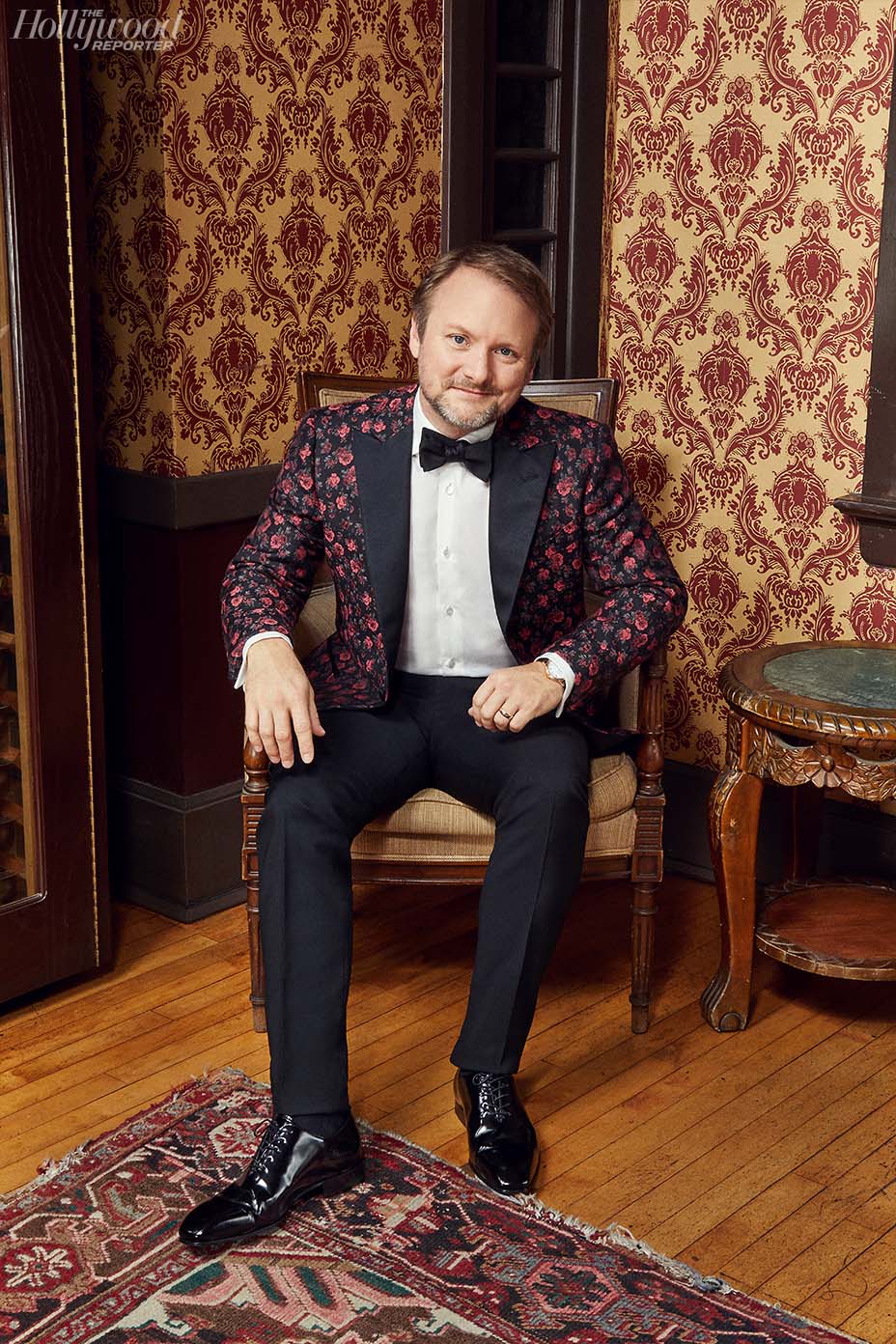 Weitz says he appreciates where the director is coming from, but he encourages his clients, mostly top executives, agents and producers, to see themselves as imagemakers who stand apart while remaining tasteful. “Men are more style-conscious today and looking to mix things up. Designers over the past couple of years have started to offer more options: dinner jackets or broken-up tuxedos,” explains Weitz. “A dinner jacket is a great way to change up the black-tie look — and you can go as conservative or as funky as you like.”

Weitz presented Johnson with two dinner-jacket options. The first — going a bit “extra,” as Weitz puts it — is an Isaia silk dinner jacket in a statement rose-colored floral with black grosgrain peak lapels. “This speaks more to your creative side,” Weitz says he told Johnson, whose films include Brick, Looper and Star Wars: The Last Jedi. “He was totally open to it.” Weitz added formal trousers, a crisp white evening shirt and a matching grosgrain bow tie. 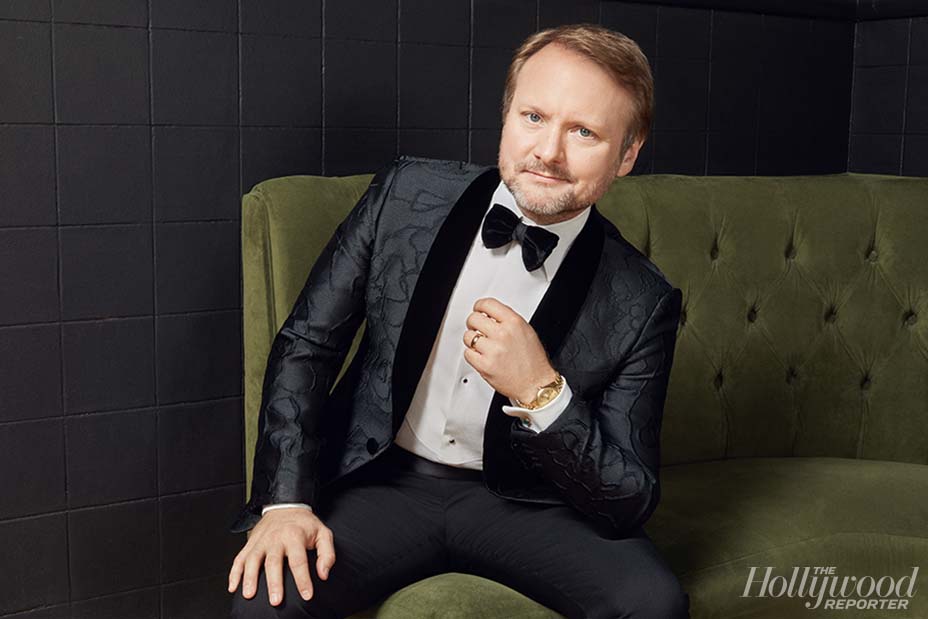 Then he threw Johnson a sartorial curve by bringing out something that hasn’t been seen in formal dressing for a while: a cummerbund, though instead of the cringy garish prints one might remember, it was rendered in subtle grosgrain from Ermenegildo Zegna.

“I was shocked. I told him I have not worn one of these literally since prom,” Johnson says. “It really does hearken back to when you rented a tux and it came with it. But when you put on a nice one, it really adds something.” Weitz notes that, with the cyclical nature of fashion, it’s not surprising that cummerbunds are back. “I’ve been a fan for a while. Not everyone’s going to wear one, but it’s really no different than a pocket square or a lapel pin. It’s another accessory to consider for black tie.” The look was set off with gold accents: a pair of David Webb cuff links and a classic Vacheron Constantin wristwatch in 18-karat rose gold. 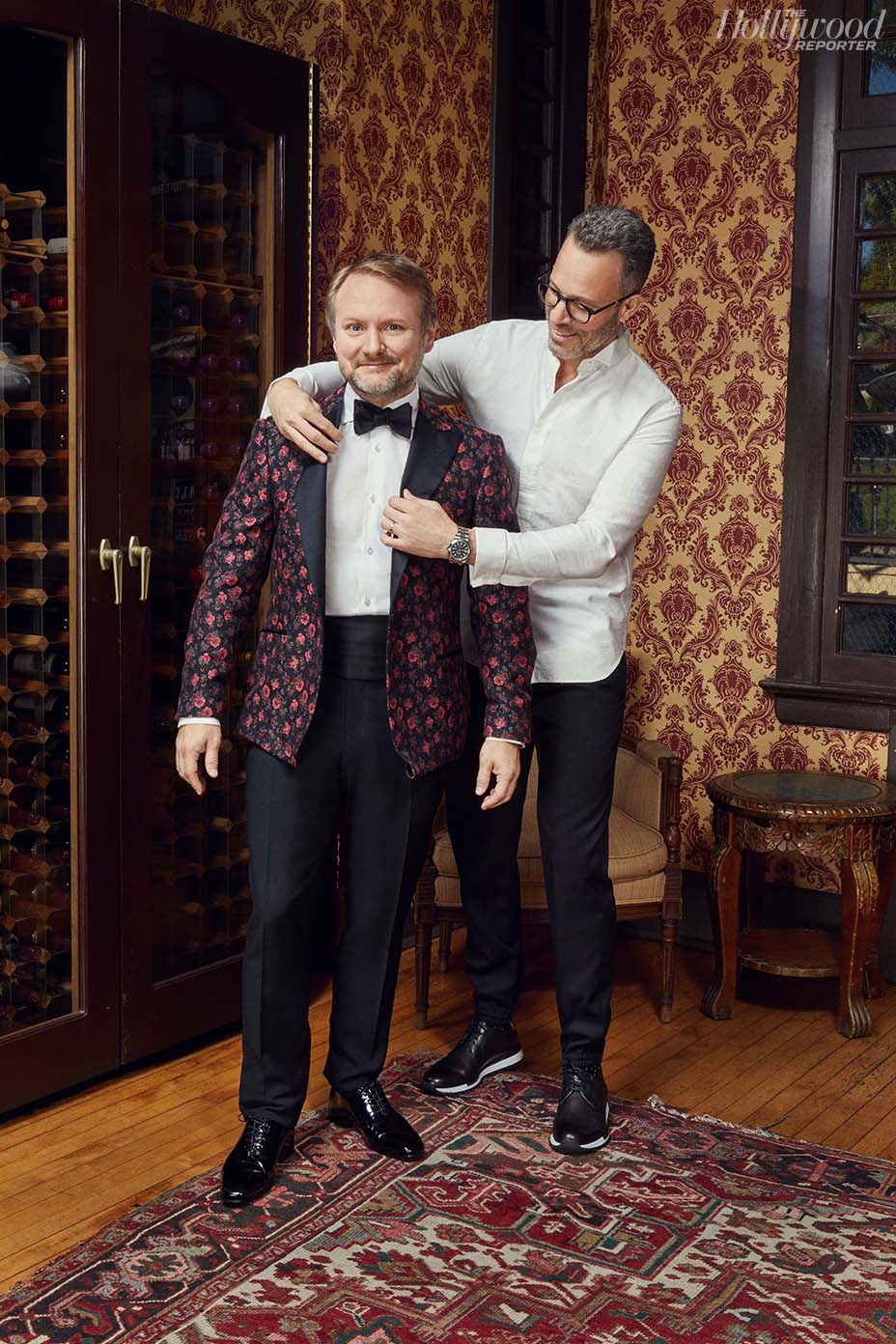 For a second dinner-jacket option, Weitz offered Johnson a silk Giorgio Armani in a textured black-on-black pattern. Set off by narrow velvet shawl lapels, it was a flattering fit for the 5-foot-6 director. “Bigger lapels would have eaten him up and looked like he was trying too hard,” Weitz says. “As soon as he put this on, you could see he just knew that it was effortless.”

Weitz paired the jacket with wool tapered trousers, a classic bib-front tux shirt, a sleek Brioni silk satin cummerbund, and — to pick up on the velvet lapels — a velvet bow tie. For the final flourish, Weitz added a spectacular pair of David Webb cuff links in 18-karat gold set with cabochon emeralds and Johnson’s own gold Rolex, handed down from his father.

“They were all just gorgeous clothes. I had a blast,” says Johnson, who last year launched production company T Street (with producing partner Ram Bergman, backed by MRC) and recently said he is “still talking” to Lucasfilm about penning a new Star Wars trilogy. A Knives Out sequel also is under discussion. “I can’t say that it’s set up and going, but I would love to do another mystery. It would be a new cast of characters,” he says, but with the same detective, Benoit Blanc (Daniel Craig). 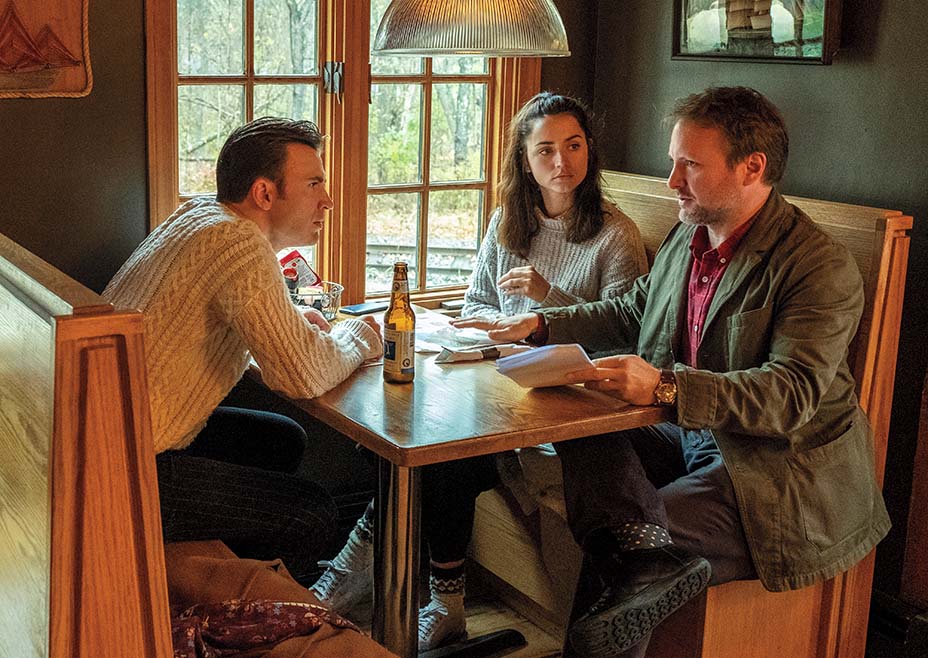 Post-consultation, Johnson admits he’s still unsure about his Oscars choice, but appreciates “even the floral jacket — that is a little bit out-there, but it was also incredibly well-cut. And the one with the black-on-black pattern is a tweak on the traditional, which I really enjoy.”

As Weitz puts it, “You don’t get nominated for an Oscar every year, but you don’t still need to go in your plain black tux. You can have a little fun, and each one of these looks is celebratory in its own way.”

WHICH WATCH FOR THE OSCARS?
Johnson plans to sport his father’s gold Rolex Datejust (“It’s really meaningful”), part of the writer-director’s growing collection of timepieces. 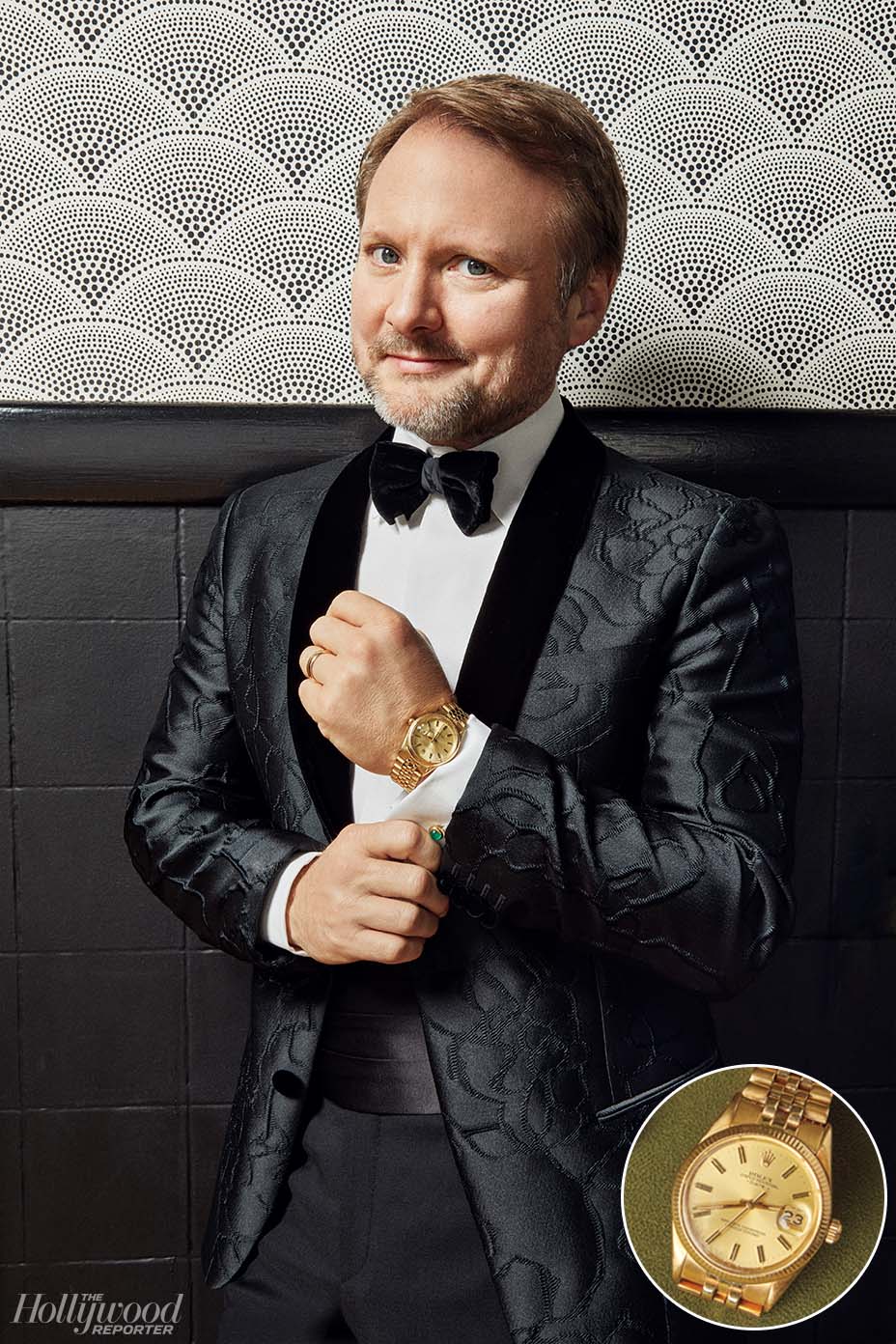 Whatever tux he decides to wear on Oscar night, Rian Johnson will have one thing on for certain: a gold 1980s Rolex Datejust once owned by his father. “To Rian — love Dad” is inscribed on the back. “It’s really meaningful for me,” says Johnson. “I think my dad always kind of wanted to make movies or be in them. He used to work in the home-building business, but I think he secretly wanted to be an actor. And movies were something that he and I really bonded over when I started making films.”

His dad’s Rolex is now part of Johnson’s burgeoning collection of timepieces, though his own taste veers more toward sporty than flashy. “I love vintage watches,” he says. “It’s a nice feeling, like you have a little bit of history on your wrist, imagining who owned it before you and where it’s been and what it’s seen.”

Johnson says he likes the “dulled-down luster” and generally smaller sizes of vintage timepieces. “The last watch I got was from 1965 — it’s a Rolex Explorer 1016, and it’s a very incredible, just beautiful, sports watch,” he says, adding that he bought it to celebrate making Knives Out. “What’s special about it is, it has what’s called a tropical dial — the face of those watches was black, but this one turned kind of caramel brown over time.” 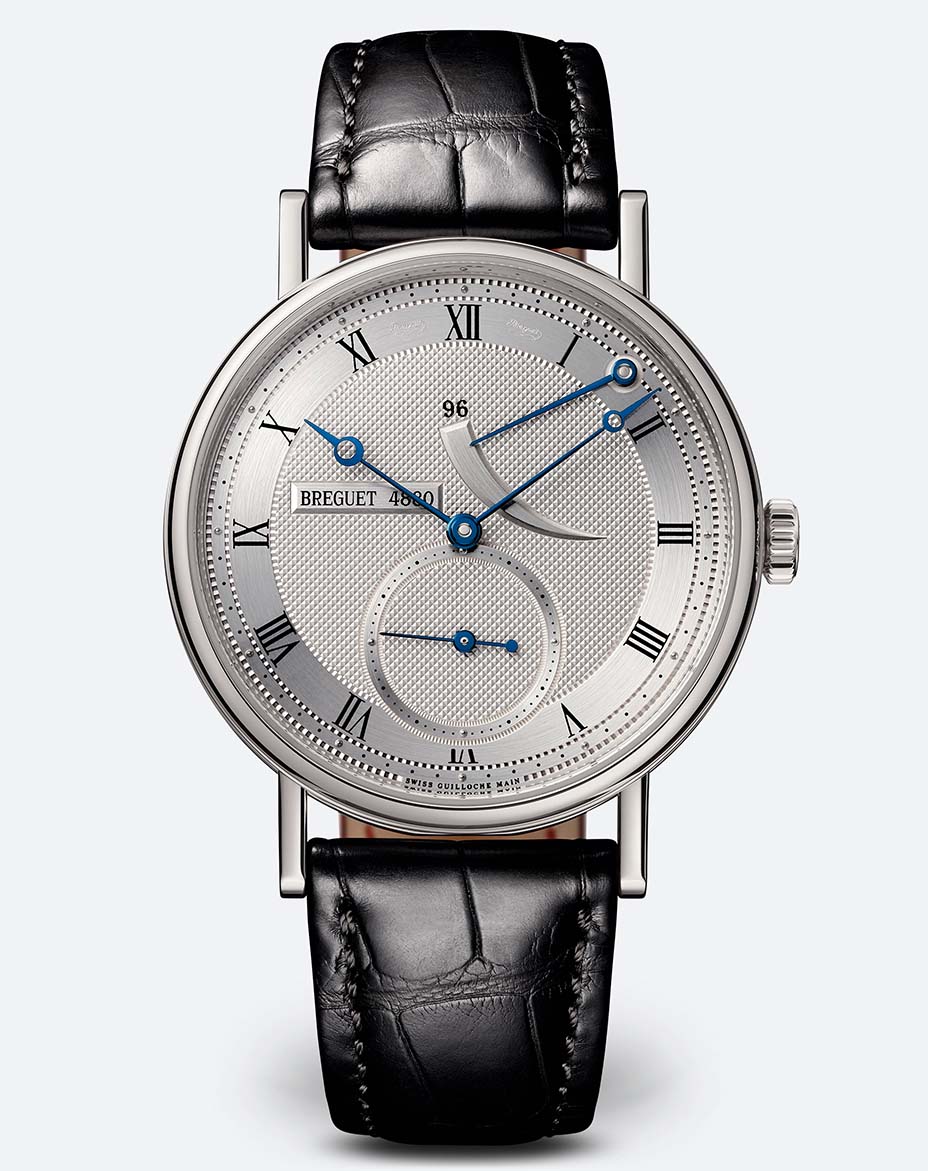 When he watches movies, the director often will find himself pausing the action to try to figure out what’s on an actor’s wrist. Once, after spotting a Hamilton Khaki timepiece in Martin Scorsese’s 1985 film After Hours, he tracked down and purchased an identical one on eBay.

Johnson says he bought his first important watch, a 1969 Omega Speedmaster, when he got the call to write and direct 2017’s Star Wars: The Last Jedi. He wore it throughout the movie’s shoot.

One thing he wants to add to his collection is another dress watch. “My father’s watch works as a dress watch, though I don’t usually wear gold,” he says. “My? holy grail watch, just because I think it’s the most beautiful object there is, is the Patek Philippe 3417. The problem is, it’s so incredibly rare and just stupid expensive these days.” (The vintage piece, also known as the Patek Philippe Amagnetic, has gone for $25,000 and up at auction.) “I’ll probably end up getting something more reasonable that looks like ?that.” 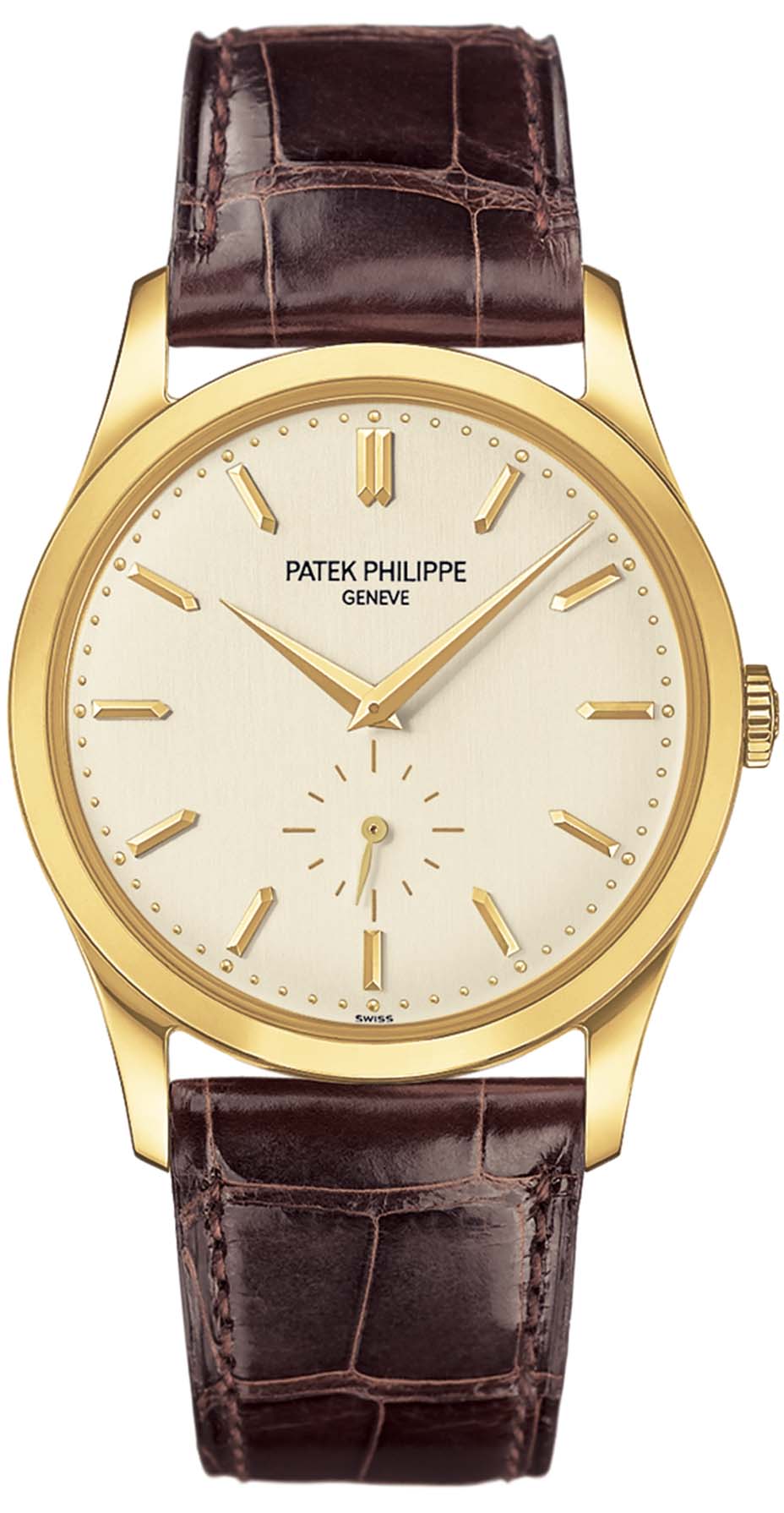