Parasite’s history-making night at the Oscars has been embraced as a shared victory for many interest groups, from international filmmakers to advocates for pan-Asian representation, but Koreans working in the U.S. entertainment industry are feeling its significance most keenly.

“This is surreal. I’m mind-blown,” said Jo Sung, an actor who has appeared in guest roles on such shows as Hawaii Five-0 and Magnum P.I., moments after Bong Joon Ho’s genre-bending thriller became the first non-English-language film to win the Academy Award for best picture on Sunday.

Sung had gathered with several dozen fellow Korean American industry members at an Oscar viewing party at Mama Lion in Los Angeles’ Koreatown. The nervous excitement in the atmosphere steadily built as the evening went on, with yelps of glee early in the ceremony when Parasite picked up South Korea’s first-ever Academy Award, for original screenplay; then cheers when its only expected Oscar, for international feature, was announced; and finally screams and shrieks of delighted surprise when Bong emerged the winner in the competitive director category.

Suddenly emboldened to hope for a best picture win, the entire bar was riveted to the screens as Jane Fonda opened the final envelope, silent with bated breath, like sports fans counting down the clock on a Game 7 that has come down to the wire. Upon the utterance of the single word — “Parasite” — the place exploded with a deafening roar that soon gave way to a chant: “Bong Joon Ho! Bong Joon Ho!”

Broadcast journalist May Lee, a former CNN International anchor who now hosts an eponymous podcast about Asian American issues, called the wins a game-changer. “In the past, [previous milestones] for Asian representation and diversity used to be just a blip and would dissipate,” she said. “This time feels like a wave that could be sustained.”

Koreans among Hollywood’s working class of actors find renewed hope in the Academy’s recognition of their cultural heritage. “A tributary that was never open before is now open,” said Yong Kim, an actor who teaches at Bong’s prestigious alma mater, Yonsei University, and stateside has credits including Tosh.0 and Adam Ruins Everything. “I didn’t think I’d ever see this in a million years, but there was momentum.”

Sung, who says that Parasite actress Lee Jung-eun (who played the housekeeper Moon-gwang) was his former acting coach back in Korea, agreed: “The excellence in Korean cinema was building up to this moment, but [the breakthrough] had to be something so extraordinary that people couldn’t miss it. Lightning in a bottle.”

Kim also noted that the patronage of Korean producers and distributors like CJ Entertainment has been critical, as was public investment in soft power.

Now the Korean government is looking to boost the efforts of the diaspora as well. The viewing party at Mama Lion was hosted by Korean American Leaders in Hollywood, a new nonprofit whose formation was encouraged and partially subsidized by the Overseas Koreans Foundation, which is part of South Korea’s Ministry of Foreign Affairs.

“We were all working in silos, and even though we’re very friendly with each other, when we get together socially we never talked about work,” said producer Kymber Lim, who serves as chair and CEO of KALH, of the various Korean Americans working throughout the industry. “This group is to force those conversations and talk about how we can help each other and collaborate with intention.”

KALH held a launch dinner on the Thursday before Oscars weekend at the Korean Consulate General Residence in Hancock Park, where those in attendance included several of the group’s 15 co-founders, including Cashmere Agency founder Ted Chung, Buchwald agent Rob Kim and Gentefied showrunner Monica Macer, as well as advisory board members such as It producer Roy Lee, WME partner Theresa Kang-Lowe and New Line publicity and communications vp Cathy Nam.

“Our mission is to build a global Korean network,” OKF president Han Woo-sung said at the launch dinner. “Parasite has given us the chance to open the door to share Korean content with others. It is clear evidence that our talent is world-level.”

In recent years, Korean American filmmakers have been making strides of their own. Andrew Ahn and Justin Chon, both in attendance on Thursday, are previous Independent Spirit Award winners for Spa Night and Gook, respectively, while last month Lee Isaac Chung’s coming-of-age drama Minari, starring Steven Yeun, swept both the grand jury prize and the audience award at Sundance. 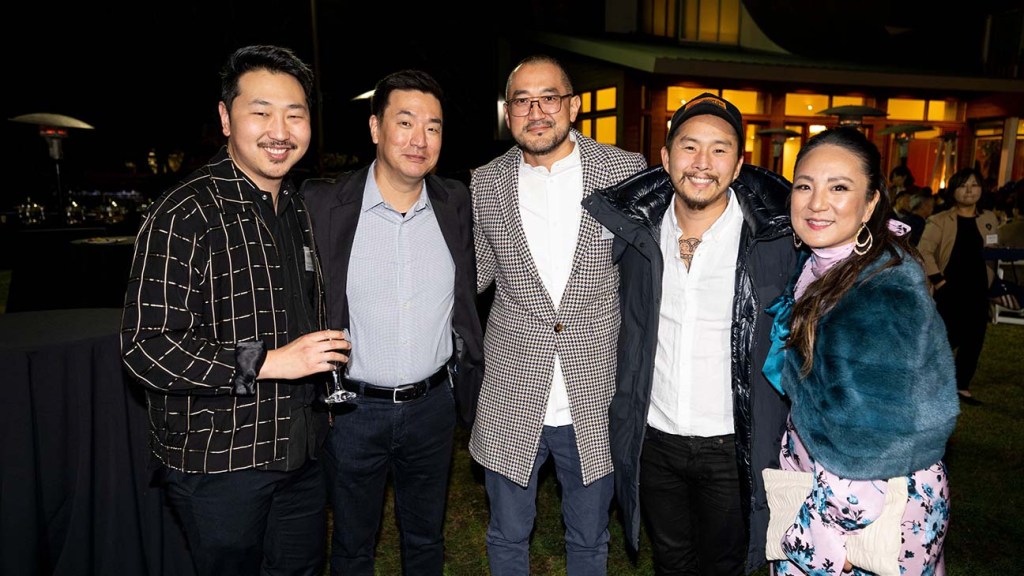 “Our stories had never been told,” said Lim. “Over the last couple of years there have been more [cross-cultural] exchanges, and now Parasite has accelerated everything. The door has opened to a goldmine.”

That was the prevailing sentiment in K-town on Oscar night. “It’s crazy how much Parasite has elevated Asians in Hollywood,” said Mike Bow, an actor who has a robust YouTube following. “Koreans are being celebrated, and I feel so much pride and hope for the future. I can feel my mom at home doing the happy dance. Now she’s going to say, ‘Someday, you’re going to take me to the Oscars.’”

Critic's Notebook: The Liberating Power of the 'Parasite' Oscar Win