With Arnold Schwarzenegger as a cigar-chomping POTUS and Michael Fassbender as a gun-toting sidekick called Colt Magnum — plus a time-traveling Hitler (The Lonely Island’s Jorma Taccone), machine-gun wielding Vikings, a half-dino/ half-human law enforcer known as Triceracop and, well, David Hasselhoff — Kung Fury 2 looks like the most insanely fun action comedy since the original Kung Fury short released in 2015. More than four years after Swedish writer-director David Sandberg’s crowdfunded VFX-heavy ’80s nostalgia fest bowed in Cannes(in the Directors’ Fortnight, no less), the feature-length follow-up – being shopped internationally by Endeavor Content, and co-repped with CAA for domestic – is revving its Lamborghini engines, with shooting having recently wrapped in Bulgaria and Germany ahead of 12 months of postproduction.

Speaking to THR while editing the film in L.A., Sandberg, 33 — the bandana-wearing Fuhrer-fighting, kung fu cop Kung Fury himself — talks luring A-list talent into his ridiculous world, avoiding the meddlesome hands of studios and getting drunk with Arnold at what had to be the greatest wrap party ever.

How has the leap been from making a bedroom project to multimilliondollar feature?

The biggest difference was the amount of work that had to be done in a very short amount of time. The shoot for the short was spread out over a period of two years. If you read a script [for the movie], there’s so much stuff happening and so many set pieces, but we had to shoot everything in 40 days. I also had to focus on acting and directing. Sometimes I’d be blocking a scene and was so focused on that and then I’d be like, “Oh, right, I’m in that scene!”

The original has a certain clunky, VHS style to it. Given the much larger budget and bigger stars, how have you made sure that aesthetic was maintained in the movie?

We spent a lot of time in prep, making sure we retained that same vibe. It’s been hard to make this movie because it’s independent. But if we had gone down the studio route, my fear was that we’d lose control and it would have become something different.

So studios did come knocking on your door?

What sort of requests did they make? We had a bunch of meetings, but the big thing coming out of them was that it would have to be completely recast.

Yeah. And it would have felt weird. When the news first came out that Michael Fassbender was in the movie, people thought he was playing Kung Fury. And they were kind of disappointed that we had recast it. So it was always my intention to keep that spirit alive and build on what we had rather than completely redo it from scratch. 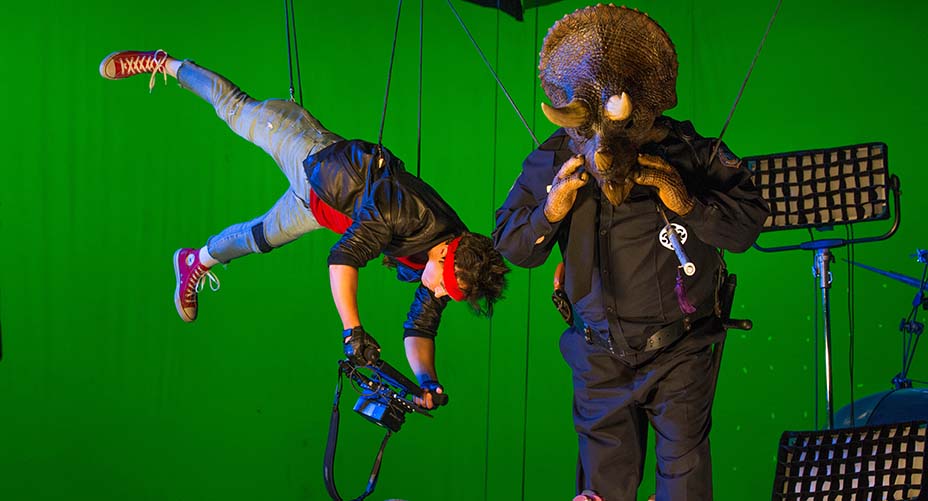 How on earth did you get Fassbender involved?

He had seen the short film and really loved it. And once he learned that a movie was in development, he asked his agent if he could read the script. Then he wanted to meet me and discuss it, and I was so blown away. I was like, “What? He’s the best actor in the world … what’s happening?” I flew to New York, we had dinner and really hit it off. We talked about it for hours. And he really got the vibe of the movie.

Schwarzenegger seems a more obvious fit for Kung Fury, but he’s no less of a casting coup. How did that happen?

So Arnold is such a huge inspiration for me. When I made the short, I had quotes from Arnold, I read his biography, and I listened to his talks. That was just like a thing that kept me motivated. And then my manager mentioned that he’s friends with Arnold’s lawyer. I asked if there was any way to get him to see the short.And he’s like, “Yeah, he said he loves it.” I was like, “What!?” He set up a lunch meeting when I was in L.A., and he told me he loved the short because of the overthe- top violence and comedy. So I wrote this part for him and he came on board. Which was just unbelievable.

You celebrated the wrap with him at an Oktoberfest party. He’s a big guy. Who got drunk first?

I think I was drunk after one beer. I’d been off them for so long [for the shoot], since April. But it was the perfect wrap party. There was a band playing and Arnold took us on stage and the whole tent was cheering him. It was incredible.

Did you ever have a moment on set when you thought, “I once had this insane idea about a time-traveling kung fu cop who fights Hitler, and now I’ve been given millions of dollars to make an actual movie about it?”

This story first appeared in The Hollywood Reporter’s Nov. 6 daily issue at the American Film Market.