Many red carpet events in recent weeks, for films from Sandra Bullock’s Bird Box to The Favourite, have been canceled due to the wildfires that are still causing damage in California. But the world premiere event for Netflix’s The Christmas Chronicles rolled out in full force Sunday at Westwood’s Bruin Theater, complete with giant nutcrackers and Santa’s sleigh. Amid the early Christmas spirit, however, the fires were still very much on star Kurt Russell’s mind.

“All of my family — all of whom are here, so about half the audience — are from Thousand Oaks, California,” Russell said in a speech before the screening. “That’s where we grew up. That’s where we’re all from. We all know we’ve had a really horrible week — a tough week — and so I’d like to dedicate this as a little sliver of something that might lift spirits a little bit, to them. And on a personal note, I dedicate this to my dad, Bing Russell, who was, is and always will be the greatest Santa Claus ever.”

Russell, who plays the big man in the holiday film, took inspiration — not from past movie Santas — but from his father, who always donned the iconic red suit and fuzzy hat for Russell and his siblings growing up. For Russell, whose mother, Louise, was also in attendance at the premiere, accepting the role of Santa was an extension of his father’s legacy of Christmas cheer.

“When I read it, I was instantly hit with how much memory I had of my childhood,” Russell told The Hollywood Reporter. “We had a great Santa Claus in our dad. There was always mystery around it. We didn’t know whether he was really Santa Claus or whether he was just a great close Santa’s helper.”

In addition to taking cues from his father, Russell detailed his research into “the real man,” St. Nicholas, which he said was key to an honest portrayal of Father Christmas onscreen. He rattled off various facts he learned about Santa in preparation for the role, including the year and location of his birth (283 A.D., Turkey) where he began his tradition of giving.

For Big Little Lies actress Darby Camp, who plays Kate Pierce, one of Santa’s young human helpers in the film, Russell was indeed as close to the “real Santa” as it gets. Actually, she’s not convinced Russell and Santa are different people at all. “I felt like he was a real Santa,” she told THR. “He gave me that Santa vibe because he probably is the real Santa. The hair and the beard was all him, which is super amazing.”

Russell has always been Santa to Oliver Hudson, who plays family man Doug Pierce. Like his father before him, Russell continued the tradition of channeling Father Christmas for his kids as well.

“It was like a fantasy that came true in a strange way because Kurt was Santa for us in real life — it’s a true tradition for us,” Hudson told THR. “To watch him step out of hair and makeup for the first time and in full wardrobe — it was shocking, honestly. It was as real as it got, and he just happened to be my dad, so it was really fun.”

Bringing Christmas magic was already charted territory for producer Chris Columbus, who was influenced by some of his earlier projects — especially the early Harry Potter films — when building Netflix’s holiday spectacle.

Coincidentally, another film slated for holiday release is J.K. Rowling’s Fantastic Beasts: The Crimes of Grindelwald. And with more Wizarding World installments on the way, Columbus teased a potential reunion between himself and the English author.

“I had to leave after the first three movies because my kids wanted to come back to America, but now they’re older and they’re doing their own thing, and it would be a tremendous honor to be able to go back and work in that world again,” he told THR. “I’d love to do some version of Harry Potter with the three kids again at their present age. Maybe she would write an original version of that. Wouldn’t that be great? That’s what would get me back.” 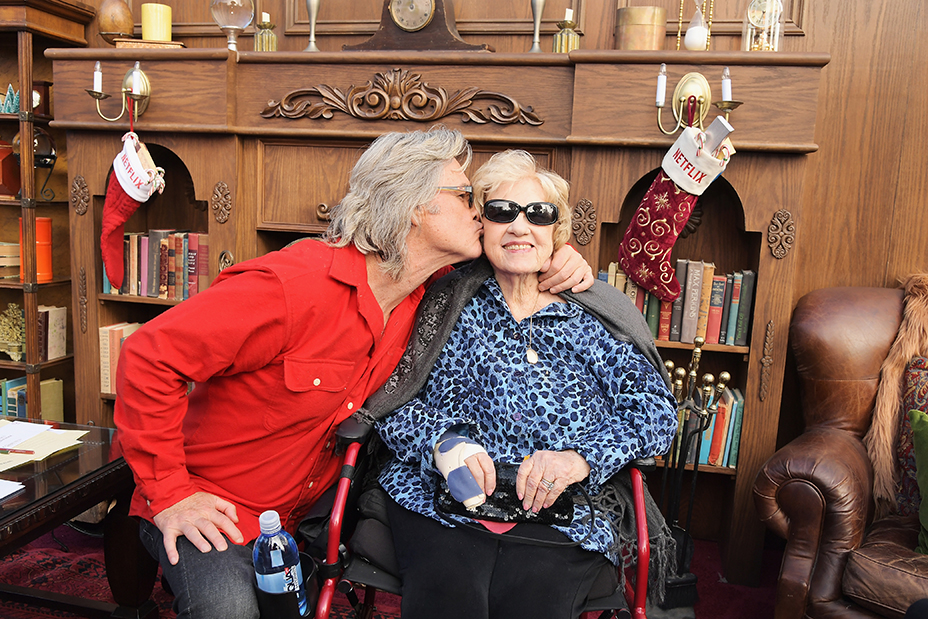