The beauty mega-mogul’s retail debut was met with the kind of fan frenzy usually reserved for pop music stars. Shoppers from as far away as New Jersey camped out in line starting last night, waiting behind a velvet rope, and carrying signs of their devotion — all with the hopes of claiming one of the reality star’s coveted Kylie Lip Kits or snatching up a sleek bomber from her limited-edition collection of merch.

The masses, who found out about her opening on her social media channels, where her lip kits are typically featured in surprise product drops, were roped in by stanchions, inching them ever closer to the pop-up shop with every passing minute until the doors opened at 10:00 a.m. The social media-savvy entrepreneur has 80.7 million Instagram and 19 million Twitter followers.

A video posted by Kylie Jenner Snapchats (@kylizzlesnapchats) on Dec 9, 2016 at 9:04am PST

Chaos ensued as screaming shoppers were whisked into the store. The mood reached a crescendo when shoppers caught a glimpse of their idol in a red sweatshirt and began chanting, “Kylie!” as the beauty maven made a quick appearance, greeting several of her fans with hugs.

Hundreds of people from far and wide came for the store’s opening, arriving at the Westfield Topanga Mall as early as 9:00 p.m. the night before and even 1:00 a.m. this morning. Half of the mall was taken up by the mayhem, which called for extra security guards and kept building mid-morning. The mall is located not far from the Kardashian compound in Calabasas.

Devotees of the $29 lip gloss and liner kits, which routinely sell out in a matter of minutes after posting fpr sale on her site, were in consensus that Kylie is the Kardashian Jenner with the most success, noting her risk-taking style and beauty know-how. 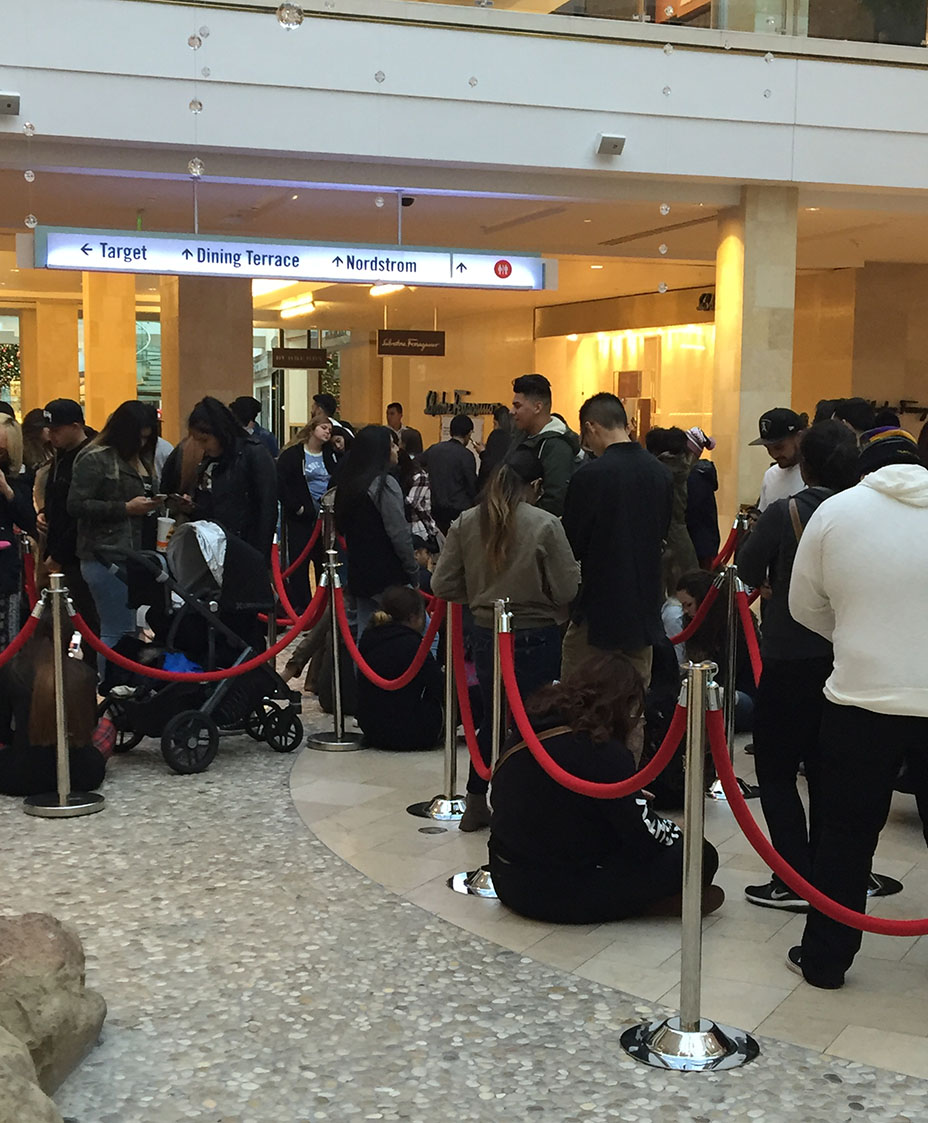 “I love everything about her, especially her style,” said Ana, the first person in line, who drove up from Los Angeles. “Her style stands out the most from the rest of her sisters and I admire her whole look. Today I’m looking to buy the Coco lipsticks and I also want to buy her bomber jacket.”

“I love how artistic she is, she always sets trends and I wanted to be here to show my support for Kylie because I love what she’s doing,” said another L.A. fan named Anthony. “I want to buy the hoodie today and also get a gift for my girlfriend for Christmas.”

A bright pink neon sign fashioned in Kylie’s signature lettering lights up the space. Inside, is a color-coded wall featuring every Kylie Lip Kit you could imagine—and an exclusive lip kit collection created just for the store—along with a rack of streetwear pieces fans couldn’t wait to buy.

A video posted by Kylie Jenner Snapchats (@kylizzlesnapchats) on Dec 8, 2016 at 7:53pm PST

The store’s interior, which was designed by Kylie herself, has a Christmas tree where shoppers can literally pluck ornamental lip kits off the branches.

Jenner, the youngest member of the Kardashian/Jenner clan, is certainly impressive; she earned $18 million in 2016, making more than mom Kris ($11.5 million) and sisters Kendall ($17 million), Khloe ($15 million) and Kourtney ($10 million), and most recently teamed up with Khloe Kardashian for a special lip-kit collection that also sold out.

Kylie’s pop-up shop will remain open until December 23rd — or until supplies last — and is located in the Westfield Topanga Mall at 6600 Topanga Canyon Boulevard on Level 1 of the mall.