Two years later, as a result of the novel coronavirus pandemic, tourism has taken a severe hit, combined with the additional hurdle of losing months of income during the statewide shutdown. In Beverly Hills and West Hollywood, cities known around the world as premier shopping destinations, this combination has directly impacted luxury retail businesses.

Rodeo Drive, only three blocks long, has nearly a dozen vacant storefronts and has seen Michael Kors, Lacoste, Tumi, Battaglia and Piaget close; similarly, Melrose Place has seen the shuttering of BLDWN, Rebag and Violet Grey; and Robertson Boulevard has an additional Michael Kors closure, along with All Saints and Ted Baker. Stores that are open are generally limiting the number of shoppers.

“It’s very difficult to have a brick-and-mortar store and make money, [especially] when they’re not allowed to operate normally,” says commercial broker Jay Luchs, who is handling many of the surging leases across the city. “What does that do to any tenant? It’s a problem.”

One solution: In an attempt to keep spaces occupied, tenants and landowners are agreeing on short-term deals, rather than the typical 10-year lease, to “test the waters,” says Luchs.

Though vacancies are up and business is down, that doesn’t mean interest in L.A.’s hottest streets has evaporated. Beverly Hills Chamber of Commerce president Todd Johnson says the city is in talks with four companies to fill openings on Rodeo, including a Japanese sneaker brand. A Chanel flagship store and an Amiri shop are under construction, and luxury group LVMH has plans to build a five-star Cheval Blanc hotel at the corner of Rodeo and Little Santa Monica Boulevard.

“Some [retailers] obviously left because business declined to where they had to leave, and I think others were probably looking to leave,” says Johnson. “We have vacancies throughout our city, but I am extremely confident that these vacancies will be filled much quicker than other cities.’” 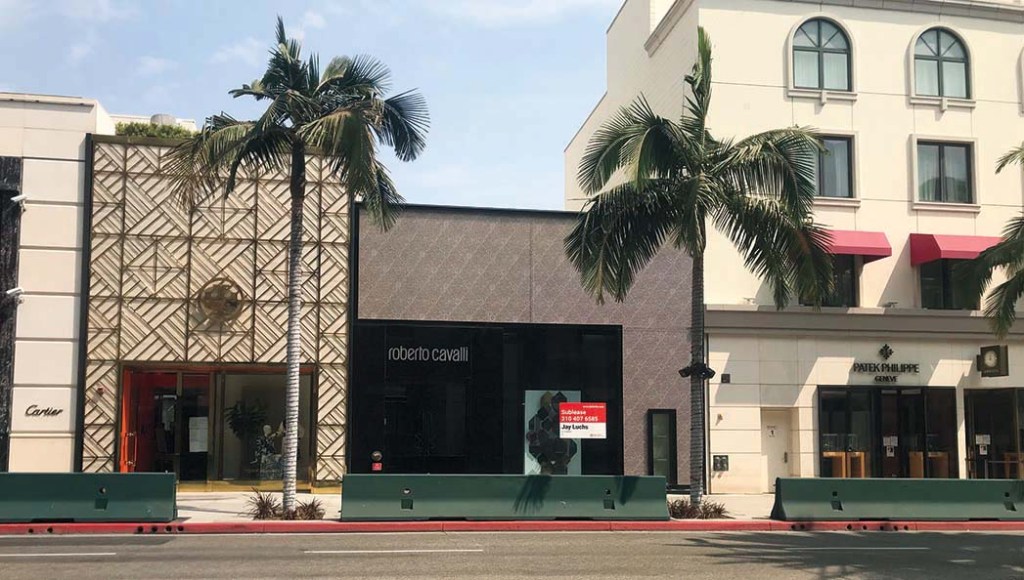 Melrose Place, of similar L.A. fame, has also experienced the ups and downs of the current retail landscape; commercial real estate agent Carine Mamann says she’s had interest from numerous businesses looking to lease, with LoveShackFancy recently opening and another tenant just signed to move in. On the other hand, West Hollywood Chamber of Commerce president Genevieve Morrill points out the burdens that retailers are under thanks to new city and state health rules: “It means reshaping how you walk through a space, your HVAC systems and ventilation and circulation, all the different PPE that applies. That takes a lot of courage to put that expense into a business when you have no ability to control being shut down over and over.”

Henry Jacques, a luxury perfume maker, is one of the few retailers to open its doors during the pandemic, debuting a store on Rodeo in July. “We had somebody drive in from Bakersfield, somebody drive in from Fresno, just to come experience the fragrance and make purchases,” says retail group president Greg Simonian, “[but] we’re not getting the random people dropping in. That was really disappointing. On Rodeo Drive, summer tourism sometimes is better than the holiday season.”

Despite the challenges and the indefinite amount of time they will last, businesses are hopeful that retail will return to its former heights in 2021, particularly on Rodeo.

“We’re talking about one of the most unique, globally recognized, luxury retail environments that exists, period,” says ISAIA general manager Duke Hagenburger. “There will always be the opportunity for that to continue to exist and to succeed. Will our clientele shift a little bit? Maybe. Will what we sell predominantly shift a little bit? Sure. Are we preparing for that going forward? Yes.”

How L.A. Fashion and Beauty Retailers Are Responding to Coronavirus Outbreak