Since founding his namesake Hollywood gallery in 1985, Michael Kohn has weathered his share of storms. “In 2008 [amid the financial crisis], buyers clammed up,” recalls the veteran art seller. “And in 1991, during the first Iraq War, everything just stopped.”

The COVID-19 pandemic presents an all-new set of challenges — but, so far at least, the results have not been quite as dire as many predicted when lockdown orders forced galleries to shutter, art fairs to migrate online and auctions to go virtual. A recent wave of record auction sales — among them a Francis Bacon triptych that sold for $84.6 million at Sotheby’s on June 29 — and a more-bustling-than-expected gallery market have led many in the industry to exhale a (very cautious) sigh of relief.

“My colleagues are surprised art is selling as much as it is,” says L.A.-based art adviser and private curator Nancy Chaikin. “People are still buying art.” 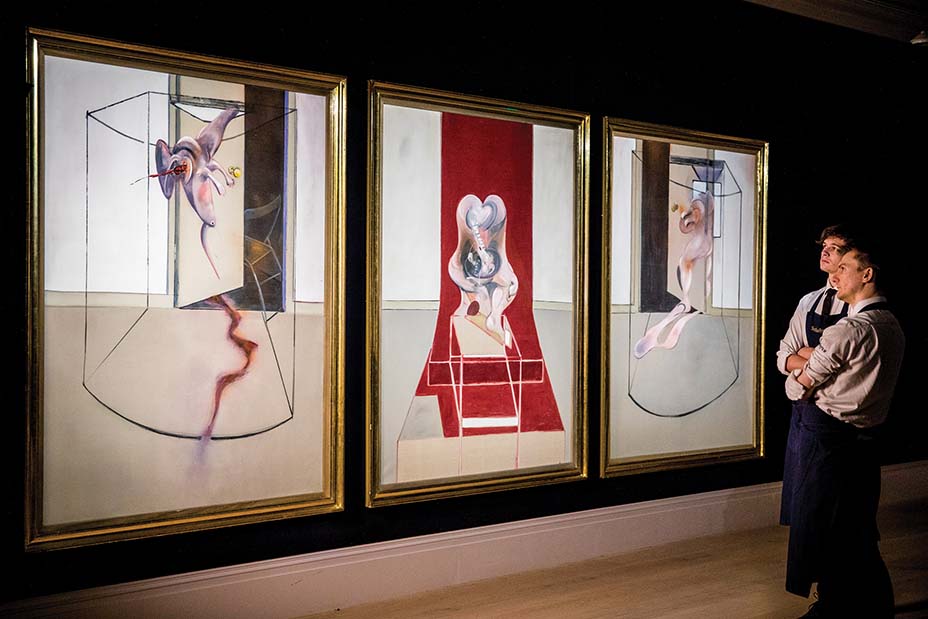 Consultant Veronica Fernandez says that June and July of 2020 “have been two of the busiest months [in 15 years]. I’m grateful but exhausted.” In just one recent week, Fernandez facilitated more than $500,000 in art sales with a single New York gallery: “It hasn’t all landed in my lap, either. I’ve had to board a plane to Colorado, drive hundreds of miles down to Tucson and up to the Bay Area to keep it all going.”

Chaikin has had a similarly robust year, noting the pandemic has resulted in “one of my best quarters — and honestly, I take no pleasure in that.”

To be sure, this is far from a boom. Kohn estimates sales are down 75 percent at his gallery, which is staying afloat thanks in part to government loans. His latest exhibition of works by Israel-born artist Nir Hod has had only six by-appointment visitors.

But despite the absence of foot traffic, six (of 12) of those abstract paintings — priced at $85,000 to $95,000 — have sold since the exhibition’s July 16 opening. “Many people knew his work already and were able to make decisions based on videos and photography,” says Kohn.

Fernandez theorizes that the same things that make stay-at-home orders such a bummer — forcing many people to sit at home, staring at overly familiar walls and feeling down about everything — have led to the sudden boost.

“Because of the restrictions on travel, collectors are looking where to disburse expendable income,” says Fernandez. “And people spend when they’re depressed. In buying art, there’s that trickle-down, feel-good factor of supporting a gallery and an artist.”

Confirms Chaikin: “A client of mine in entertainment was so excited to have his purchase delivered. He said it gave him ‘a sense of normalcy’ — which is something we all want right now.”

“It’s great to see these women’s enormous artistic contributions have been recognized by the marketplace,” she says. “It’s long overdue.”

And with fairs like Art Basel Hong Kong and Frieze New York going virtual, collectors and gallerists are saving collective millions on travel and shipping fees. Some of those funds have been funneled into trading art — while the shift has opened sales to a new kind of buyer, one who might be a little less experienced than the average jet-setting collector. “All the prices are out there,” explains art advisor Elizabeth Margulies, referring to so many galleries’ now having online viewing rooms for exhibitions. “It’s become that much easier to buy.”

The blue-chip market has been the most bullish of all sectors, with the aforementioned virtual Sotheby’s auction netting $363 million — the Bacon went to Sotheby’s own contemporary department head Gregoire Billault — while a July 10 Christie’s live-stream auction moved $421 million in works, including $46.2 million for a Roy Lichtenstein painting of a female nude.

According to a June 15 Bank of America art market report, a steady demand for masterpieces paired with limited inventory — owners are hesitant to part with their valuable paintings during uncertain times — is what’s behind those record sales.

The same report predicts a glut of supply will lead to a 10 to 30 percent drop in prices for established artists starting this fall and continuing through spring 2021. “It’s tough in the middle,” notes art lawyer Daniel McClean of works in the $35,000-$50,000 price range. “But there’s a lot of movement at the blue-chip level, and at the younger end on the American side, it’s been super active.”

Ultimately, the market’s resilience in the Age of COVID boils down to one factor: having too much money to worry about things like pandemics.

“Collectors who buy art have the means to continue to buy art, even if you temporarily lose part of your income,” says Chaikin. “You’re dealing with an elite class and a rarefied world.”