Leah Koch has been shipping packages on her own every day since The Ripped Bodice — a romance-only bookstore co-owned with her sister Bea — was temporarily closed down in mid-March. “It’s been like 10 days, but it feels like it’s been 14 years,” she tells The Hollywood Reporter while packing shipments.

The Culver City retailer cancelled all upcoming events and closed to foot traffic on days prior to the citywide order requiring all non-essential businesses to do so. “I wanted to be part of the solution, not part of the problem and it was obvious that it was coming,” Koch says. The co-owner notes the store will fully pay its staff, consisting of 5 employees, until it reopens: “They are all being paid as if they were coming in to work the shifts regularly scheduled.”

And it has been trying to adapt to online-only sales. “It’s been pretty steady ever since we announced that we were going online,” Koch says of the increase in orders the store has seen, which has been attributed to “care packages” of romance titles. “Those have been so popular. We put them up before we closed to foot traffic. Within 48 hours, we had 230 orders,” Koch says, adding that the store now has a waitlist for the care package service and, as of this writing, there were 700 people on the waitlist.

But, after the March 19 order by Los Angeles Mayor Eric Garcetti to order non-essential businesses closed, other area bookstores have been hit harder by the shuttering of their retail operations.

West Hollywood’s Book Soup and Pasadena’s Vroman’s tell THR that of their 200 employees, senior managers are working remotely whereas hourly staff are either full or partially furloughed and receiving earned time off pay and health benefits as eligible. “We implemented a new emergency time off benefit equivalent to two weeks of average pay in March in addition to existing sick and vacation politics,” Vroman and Book Soup CEO Julia Cowlishaw says.

Chevalier’s Books in Hancock Park closed due to the order and wrote in a note on its website, “These are confusing and wild times, but we maintain that there is no better comfort for the soul than a good book. (Also, you might want to lay off Netflix for just a bit.)”

Skylight Books on Vermont Avenue closed until further notice but is still processing online orders. The store, which has a staff of 25, is keeping all employees on payroll at their regular rate and hours through April 19. Venice’s Small World Books closed on March 17 and redirected any customers to Bookshop.org, which partners with indie stores.

Meanwhile, The Last Bookstore L.A. remained open until March 18. The store is now curating personalized book bundles for curbside pickup, shipping online orders and “offering private appointments to parents, students, teachers and those wishing to feed their minds with knowledge during this time.” 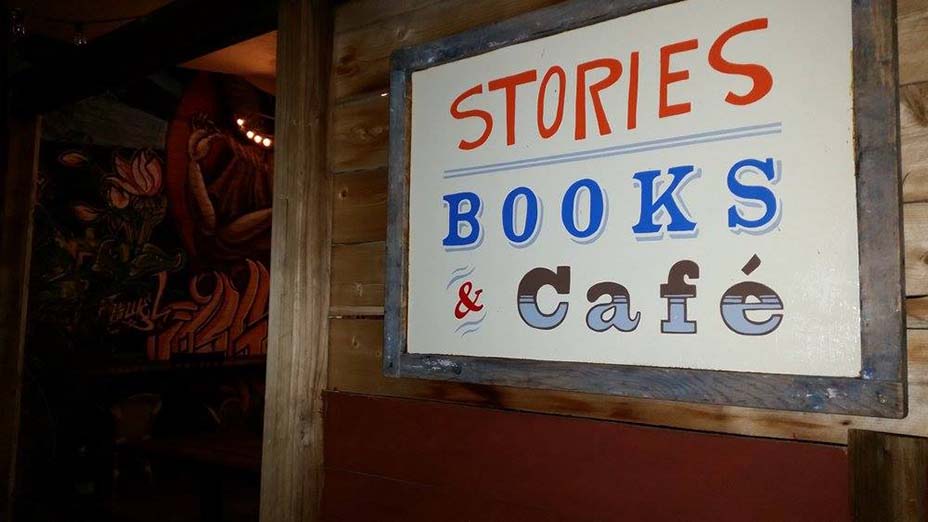 Echo Park’s Stories Books & Cafe closed its doors March 16 in response to the pandemic. “I’m not scared for my own health. It’s just the responsible thing to do for everyone else around me,” co-owner Alex Maslansky says. The store’s 24 employees have been encouraged to use paid time off and sick leave time. While Maslansky says that pay for staffers should be close to their regular paychecks for the upcoming pay period, it does not include tips, a “substantial part of the Café wages.”

“We’ve applied for the SBA payroll loan and hope to keep everyone on payroll when and if we’re approved,” Maslansky says, referring to the Small Business Administration relief measures in a federal stimulus bill wherein borrowed money can be forgiven through the newly created Paycheck Protection Program.

Maslansky adds that, in anticipation of disruption caused by the coronavirus pandemic, the bookstore received a cash loan through Square Capital. “They have since deferred minimum payment for a month, which is nice. It’s a fixed rate loan, and payment is automatically deducted from the day’s sales. As our sales are zilch for the moment so we appreciate the forbearance they’ve shown,” he says.

The Stories co-owner adds, “It’s kind of like you’re on a sinking boat and somebody throws you a tablespoon to start pumping the water out when you know you need a bucket.”

But Stories has had to shutter its online business for the time being due to health concerns. “It involved me going into the store daily and going to the post office and transgressing very simple requests science has made of us. I don’t want to put myself at risk or risk transmitting to other people during that whole process,” Maslansky notes. 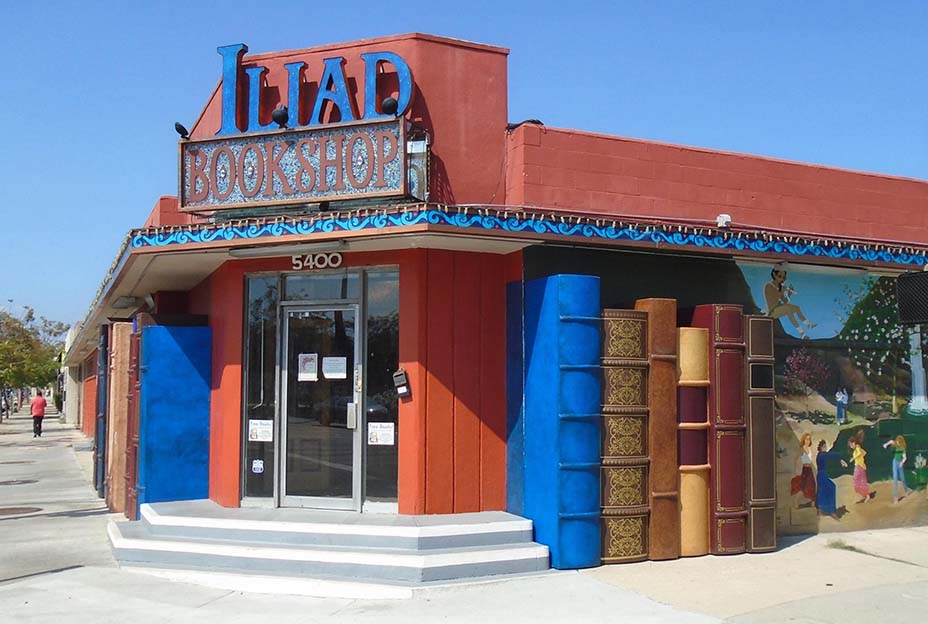 North Hollywood’s Iliad Bookshop — one of the largest used bookstores in the Los Angeles area — closed immediately following Garcetti’s “Safer at Home” Order on March 19. “I think we were all expecting it,” longtime employee Lisa Morton says.

The Iliad Bookshop says all of their nine employees plus owner Dan Weinstein are currently furloughed. “We have no idea how long the furlough will continue,” Morton says. Prior to the stay-at-home order, Morton, who has worked at the store for over 30 years, says Iliad Bookshop was “about a third of its normal level.”

“Several years ago our walk-in business reached the point where we couldn’t keep up with both online and in-store, so we essentially shut down our mail-order business. Now we don’t have that to fall back on,” she explains of the shop’s current struggles.

Despite independent stores closing and booksellers temporarily unemployed, retail for books has surged online, proving that it could make for the best and worst of times. The American Bookseller Association’s bookselling site reported a 250 percent increase in traffic. The newly launched Bookshop.org, which partners with indies and media, reported a 400 percent increase in sales, equating to $100,000 being put back into the bank accounts of bookstores. Simon & Schuster marked the first of major publishers to partner with the site.

Charitable efforts such as The Book Industry Charitable Foundation (BINC), a nonprofit aimed to help booksellers, will also aid indie bookstores in need. The foundation has raised $700,000 since the beginning of the COVID-19 crisis and anticipate a minimum of 1,000 booksellers needing at least $1,000 in the initial outbreak response. Author James Patterson has also personally raised $500,000 to help independent bookstores, while also partnering with BINC and the ABA to promote #SaveIndieBookstores. The campaign will run through April 30, at which point BINC will distribute the total funds raised to eligible independent bookstores.

Unit sales of print books remained resilient in the week that ended March 21, according to NPD BookScan. Sales of children’s nonfiction rose nearly 70 percent that week, as more children are being home-schooled amid the quarantine. Top fiction bestsellers include Delia Owens’ Where the Crawdads Sing, Little Fires Everywhere by Celeste Ng and The Boy From the Woods by Harlan Coben.

As for The Ripped Bodice and co-owner Koch, for now she’s adapting to an online-only business model on her own with sales “above Christmas level.” “I literally spend like seven or eight hours a day packing and shipping orders. That’s all I do,” says Koch. “This is not why I opened a bookstore and I do not desire to spend my days packing and shipping hundreds of packages. So it’s not fun, but there are bigger problems at the moment. I’ll live and this is the only way we can make money right now. So it’s pretty easy to convince myself that this is what needs to happen in order for us to get by.”

Despite the business challenges faced by indie booksellers, those interviewed say what has been the most uplifting is hearing from their community. “I get emails, Instagram messages, Facebook messages daily from customers begging us to hang in there and wishing us well. It’s been really touching how the worst situations bring out the best in people,” Maslansky says.

Koch received similar positive communication from Ripped Bodice loyalists, sharing that before the pandemic, there’d rarely be a comment from an online order. “Now every single order has a comment. Just like, ‘supporting you from Arkansas or Alaska.’ A lot of people saying, ‘This is my first order.’ I think in any hard time, you frequently see people’s innate goodness come out, if they have it, ” Koch says.

The Ripped Bodice co-owner adds that customers seem to be “going out of their way to make purchases that they normally wouldn’t make because they know that we need it.”

For now, entertainment at home — be it a movie, a video game or a good book — is the surest and safest escape. As Stephen King said, “books are a uniquely portable magic.” A hope indie booksellers share is that “magic” will continue to draw support and keep business going. Then whenever “the fog lifts,” Maslansky says, “people are going to want to reconnect and talk about all these books they’ve read.”

“Be ready to shop when we’re back open,” Maslansky adds. “I wish I could send books out to everybody who needed it, but we can’t. We will be there for you when this is all over and we can’t wait to get back to the business of filling people’s minds with grand ideas and good stories.” 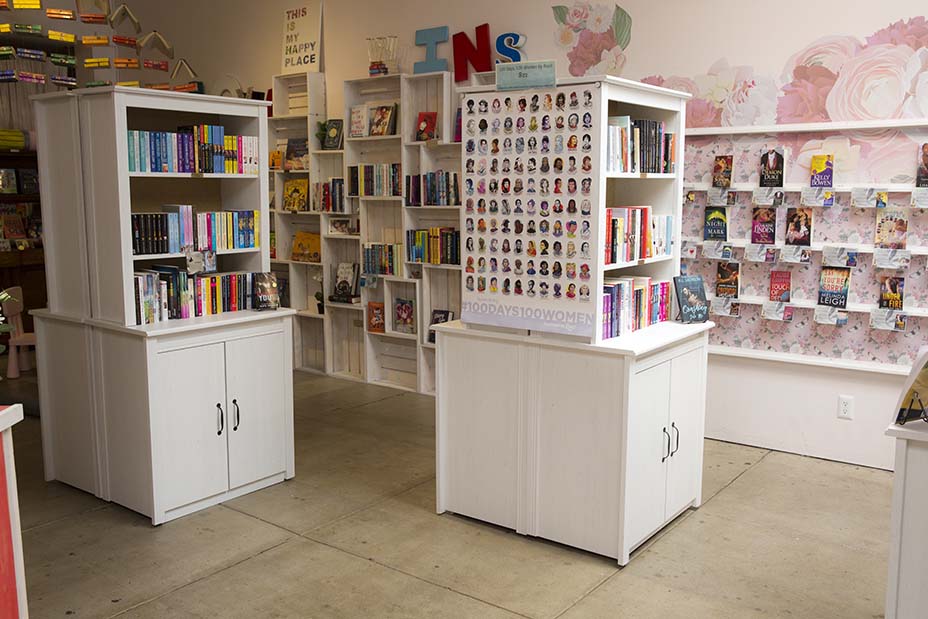