Continue to The Hollywood Reporter SKIP AD
You will be redirected back to your article in seconds
Skip to main content
November 29, 2016 3:54pm

Feel-good film of the season La La Land, starring Ryan Gosling and Emma Stone and set to bow Dec. 9, is likely to stir up memories of youthful dreams, romances and, if you live here, the City of Angels.

A love story about a jazz pianist Sebastian (Gosling) and a struggling actress Mia (Stone), it’s also a modern musical full of song-and-dance routines set against such iconic L.A. locations as Griffith Park Observatory, the Rialto Theatre and yes, the freeway at rush hour. To help create the distinct, color-saturated look of La La Land and straddle the line between classic cinema of the 1950s and 1960s and a contemporary coming-of-age tale, writer/director Damien Chazelle tapped costume designer Mary Zophres (No Country for Old Men; Interstellar; O Brother, Where Art Thou?).

Zophres chatted with The Hollywood Reporter about her historical touchstones for the film; Gosling’s distinctive, character-defining shoes; Stone’s dance dresses; and how grueling it was to work on that freeway scene.

How did you start your research?

I always do a breakdown of the script by hand; it helps me by writing and repeating. In order to explain the film, Damien cut a montage together of romantic musicals and movies. It was such an inspiring piece, it got me in the mood, and it had everything from The Bandwagon (1953) to Singin‘ in the Rain (1952) to Baz Luhrmann’s Romeo and Juliet (1996) and Strictly Ballroom (1993) to Boogie Nights (1997) and Catch Me If You Can (2002). I went to Vidiots [in Santa Monica] and started renting all the films, and printed up freeze-frame images. Then I went through my books of actresses from other time periods, modern photography — anything that had an interesting image that could be good for a scene. Then, for three days, my team met with Damien and the production designer and set decorator and went page by page through the script exchanging ideas. That became the language of the film. 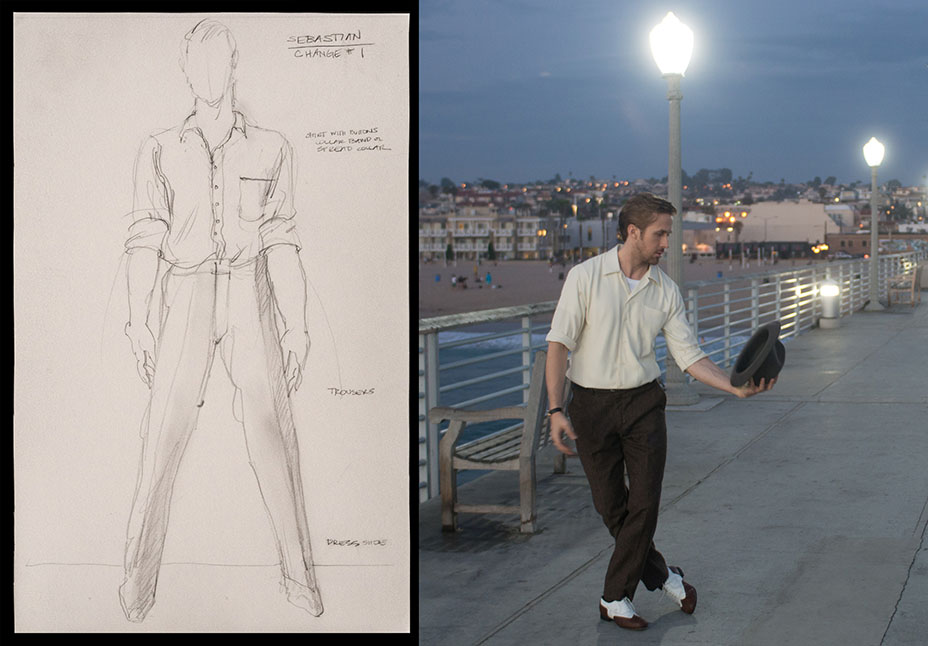 Sebastian’s two-toned shoes really set the tone for his character, in the way that they were a bit retro but whimsical. Tell me everything!

He talks so much about keeping jazz alive, so it’s obvious he’d be inspired by previous generations. We first thought we’d use Stacy Adams, which is a line of men’s shoes I use a lot in period films. But when they started rehearsing, the choreography was going on next door to the costume department, I could tell they weren’t thrilled with the shoes. So I went to a dance store in Westwood called Worldtone, and picked out those. (The style is the Nuevo Epoca Buenos Aires in black-and-white leather.) Ryan loved them and they are so right for the character. That’s how it happened. Dance necessitated it.

There’s also a moment when Sebastian and Mia are sitting on a park bench, and their feet are going side-to-side, and I said, ‘They have to wear matching shoes!’ So first, Ryan was wearing them and then Emma. They were on the road in Griffith Park on an incline, so she takes her heels off and puts on the two-toned shoes.

Let’s talk about Sebastian’s costumes — his pants had a higher waist and wider legs, and the shirts were silky. It was kind of a throwback. Was there a certain jazz great he was modeling himself after?

[Jazz pianist] Bill Evans, [actor/pianist] Hoagy Carmichael and [actor] James Dean are all people I looked at. And there were two French New Wave films in the montage in particular — The Umbrellas of Cherbourg and The Young Girls of Rochefort — that were most influential. Damien didn’t really have anything specific in mind for his character. We thought he could dress like a composer, but it wasn’t romantic enough. I wanted women in the audience to be wooed by Ryan, and the men to feel romantic about Emma. We made all of Ryan’s clothes. He wore pretty much one or two trousers the whole movie, and they showed off his feet. They were learning the dance moves, so why not? He had one dress shirt, a couple casual shirts and two or three blazers, that was it. I didn’t think his character was informal enough to ever wear a T-shirt. 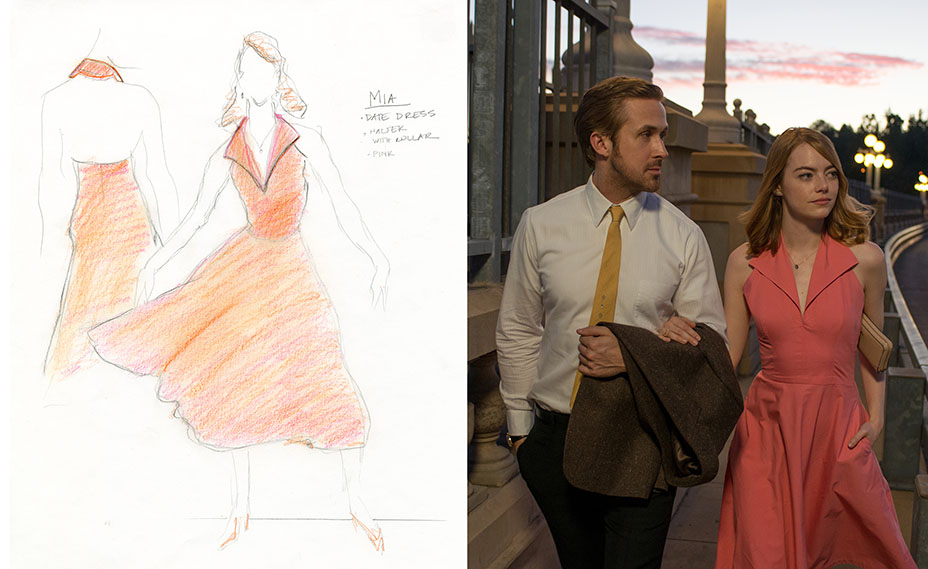 Emma wears a dress or skirt almost the whole movie.

We designed everything she dances in. She has a beautiful neckline, arms and such a graceful line, so that influenced the silhouette. We wanted the whole film to be classic-looking. The yellow dress even has matching underwear underneath.

Her daytime clothes, we didn’t want them to be so high-end that it didn’t look like she’d buy them as a struggling actress. We did get some pieces at Playclothes, which is my favorite vintage store in Burbank, including a pink A-line skirt, paired with a top I got at H&M for $5.

The navy halter dress she wears at the end of movie, that is the one designer dress we used, by Jason Wu. It’s similar to a dress I saw Catherine Deneuve wearing in a photo where she’s looking over her shoulder. I had that photo pinned to my board, and I found the dress at Saks Fifth Avenue. It seemed right to have a store-bought dress for that scene, because she’s at a different point in her life. It’s a mature choice. The white dress in the epilogue is actually my favorite. It’s very Fred and Ginger with the starry night background.

The necklace Mia wears for the majority of the film and her green necklace and earrings worn with the green dress are by Kyle Chan Design, based in L.A. The necklace, rings and bracelet Mia wears in the five-years-later sequence was lent to us by the New York-based fine jewelry designer Monique Pean. 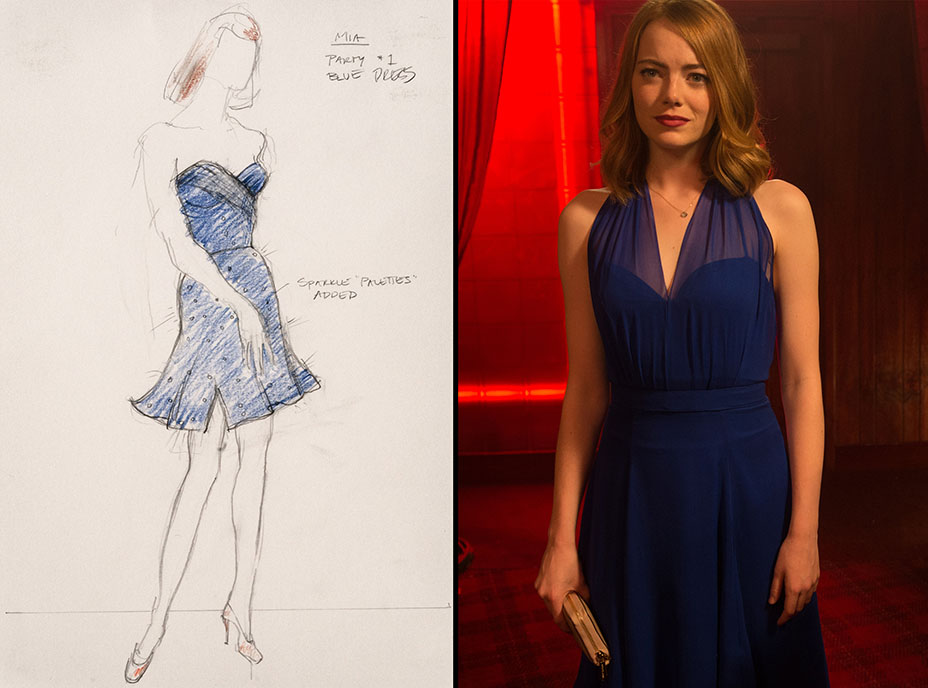 It must have been a big job just doing the costumes from the opening freeway dance number alone!

We didn’t build anything for that scene. It was 110 degrees the day in October when we were shooting, and everyone was dancing their butts off at the interchange of the 105 freeway. They were drenched. It was about 40 dancers, and they kept changing clothes in the car. We had costumes in triplicate. It wasn’t as difficult as some of those musical numbers in O Brother, Where Art Thou?, but this was right up there.