When it comes to sharing a Rolodex of donors, politicians aren’t typically known for their generosity — but for Los Angeles Mayor Eric Garcetti, who enjoys the support of industry titans from J.J. Abrams to Jimmy Kimmel, the stakes in the recent midterm elections were just too high to not spread the wealth. “You win elections and hold power and govern for the long haul not by depending just on a candidate’s talent but by building the capacity for state parties to get the vote out, to register people, to find the next generation of leaders,” says Garcetti, who with his PAC drummed up more than $1.5 million for dozens of Democratic candidates across the country.

The idea to serve as a conduit between Hollywood’s donor class and candidates from California’s Kern County to Mississippi came to Garcetti in the spring when he was hosting an event for the Democratic State Party of South Carolina at the L.A. home of CBS’ David Nevins. “I said — let’s take a risk. Let’s make all the work that we do not about us but about those folks in these other areas, including in our backyard with the California Democratic party and see what we can do to fill a need.” And Garcetti, 47, did more than raise money; he also upped his national profile by campaigning with Dean Phillips in Minnesota, Joe Cunningham in South Carolina and Kendra Horn in Oklahoma, as well as a half-dozen candidates who flipped California seats in the House of Representatives, including Katie Hill, Mike Levin, Katie Porter, Gil Cisneros, and Harley Rouda.

On Nov. 26, another Garcetti-backed California Congressional candidate, TJ Cox, pulled ahead of his GOP opponent. A victory for Cox would put 46 of California’s 53 House seats (including four in the Republican stronghold of Orange County) in the Democrat column. Overall, of the 52 races that Garcetti and his PAC supported, 32 were considered wins, 19 losses, and one — Mike Espy’s Mississippi race for Senate — was set for a too-close-to-call Nov. 27 runoff at press time. 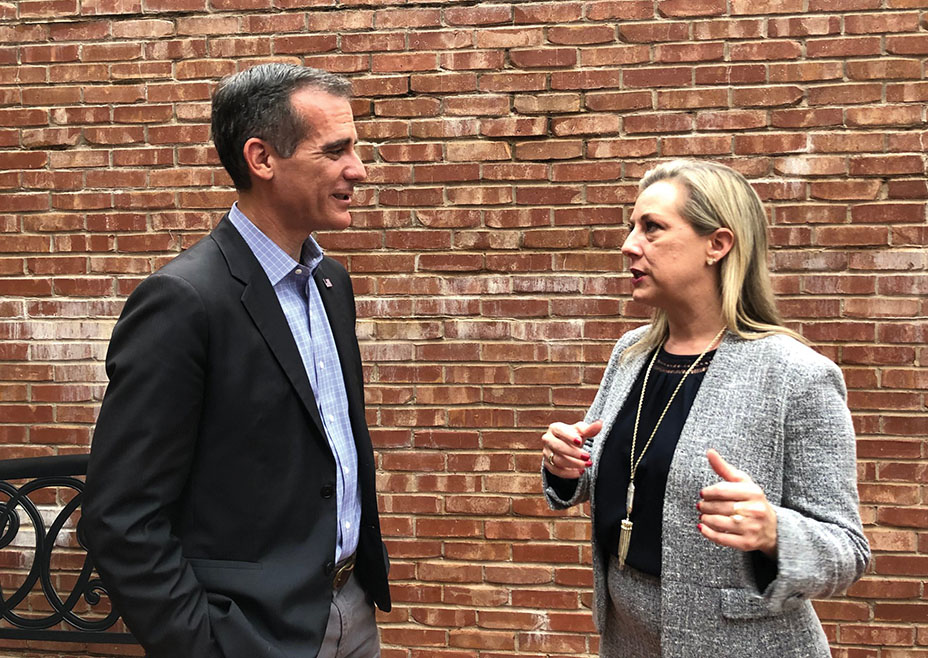 “What I tried to do is make sure folks were introduced and create direct relationships,” says Garcetti. “I don’t need to broker these things. I want state party chairs in other places to know a Jeffrey Katzenberg or a David Nevins or some of the other big donors; these are the people they can come back to in the future.” One thing that struck him is how much farther a dollar goes outside California, where flipping a state assembly seat can easily cost $1 million; in Oklahoma, $10,000 might be enough.

Defeats for gubernatorial candidates Andrew Gillum in Florida and Stacey Abrams in Georgia, as well as Texan Beto O’Rourke in his Senate race against Ted Cruz, were positioned by many pundits as a rebuke to Hollywood’s investment in those races (attorney Skip Brittenham hosted a Gillum fund-raiser; Oprah Winfrey and Michael B. Jordan canvassed for Abrams). But Endeavor vp government relations Amos Buhai, who oversees the Endeavor Action PAC, counters that narrative. “Beto and Abrams were both inspiring and great stories, but they were never expected to win,” he says. “People forget that a year ago it was a long shot that the Democrats would even take back the House.”

And while Garcetti’s efforts fueled speculation about a White House run (on Nov. 19, a “ready for Garcetti” email blast went out to key donors), his stated priorities for 2020 are not yet presidential. “If people want to hold on to the House of Representatives that we just won,” he says, “we’d better get to work right now.”

How the Midterm Elections Broke Race and Gender Barriers