Eco-friendly transportation savior or dangerous nuisance? That has been the debate among local neighborhoods for over half a year since Bird and Lime scooters first landed in Los Angeles County. With the scooters having sharply polarized public opinion, cities are now starting to take a stand on the dockless electric vehicles as they aim to enforce safety regulations.

Those taking a cautious wait-and-see approach include Culver City, which on Friday launched a six-month trial program with Bird to study “the best way to address this new transportation model,” according to a city statement. The city also held an “electric scooter” safety event Monday, aimed to enforce the proper etiquette when riding the scooters. During its six-month test, Culver City is requiring riders to wear a helmet and mandating that Bird respond to questions and concerns from residents, as well as ensure that no pedestrian or biker is harmed by the soft launch.

Meanwhile, Santa Monica — which has been inundated with the vehicles since October 2017 — will be launching its own 16-month program starting Sept. 17 that will allow electric scooter and bike companies to operate there if they follow new rules and regulations. Santa Monica’s pilot program will allow electric-scooter and electric-bike companies to operate as long as they apply for a permit, offer safety education and agree to a dynamic cap on the number of vehicles out and about.

Municipalities drawing a line in the sand on the scooters issue include Beverly Hills, which on Wednesday banned the conveyances for six months, with the City Council citing safety concerns and “a lack of any advanced planning and outreach by the motorized scooter companies.” It followed the lead of West Hollywood, where City Council members banned the vehicles in early July following complaints about companies’ lack of permits to operate in the city and the cluttering of sidewalks.

As these cities have taken action amid backlash against the scooters, others in the county have taken note and are beginning to organize their own responses. Several cities contacted by The Hollywood Reporter, including Malibu, Venice Beach, Los Angeles proper and Burbank, were in the midst of organizing meetings to discuss the dockless scooters. While Malibu and Venice Beach did not have a particular timetable for those meetings, Burbank planned to discuss the scooters in September and Los Angeles will discuss a report about the matter (Council File 17-1125) fairly soon after the City Council returns from recess, one communications officer estimated. Pasadena, Baldwin Park, Inglewood and Marina Del Rey had no plans to discuss the scooters. (Manhattan Beach and Westwood did not immediately respond to a request for comment.)

In its most recent form, Los Angeles’ report, which passed through the Department of Transportation in June, recommends a maximum 5,000 scooters in the city, with half of those located in disadvantaged communities and a requirement that scooters be locked to a fixed object when immobile and that all rules be enforced by Bird and Lime itself.

While fans call them an environmentally friendly transportation solution that helps to reduce L.A.’s traffic gridlock, detractors have cited the scooters as a safety risk, given that users rarely wear the legally mandated helmets, often zip down sidewalks at 15 mph illegally and leave the scooters in the middle of sidewalks or in front of entrances when done riding.

According to the Los Angeles Police Department, which has begun to cite or warn scooter riders on the wrong side of the law, users should know that most laws applicable to vehicles, including obeying traffic control signals such as stop signs, tri-lights and movement restrictions, are also applicable to motorized scooters. Should any of these provisions be broken, customers are eligible to be fined, with the court determining what, if any, fine would be levied. “At this present time, there are no such L.A. Municipal Codes enacted for the city to be able to levy fines,” LAPD’s Lt. Lonnie Tiano says. 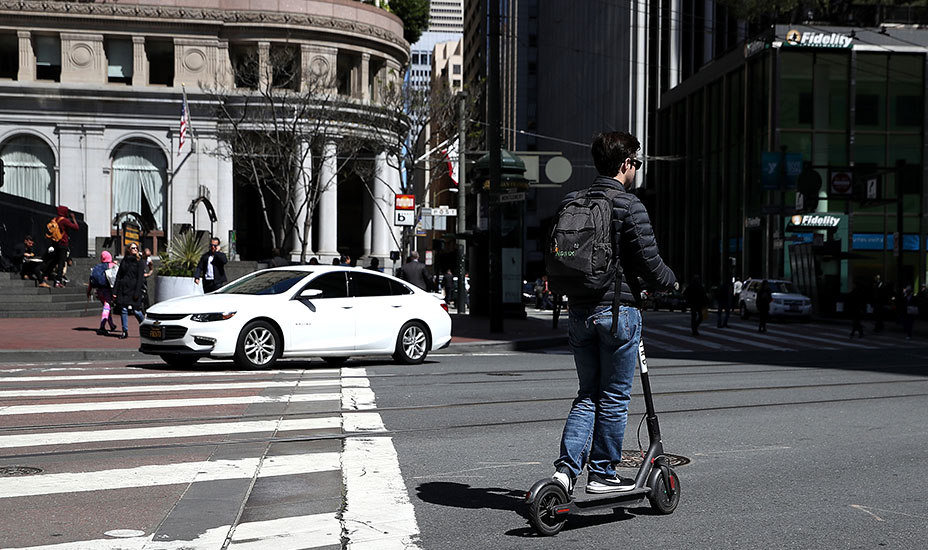 Amid safety concerns, current requirements that riders must obey include wearing helmets when operating the scooter, yielding to pedestrians, abiding by the rules of the road and all L.A. City ordinances when riding on the street, refraining from riding on the sidewalk and from riding under the influence of alcohol and/or drugs. Users must also be a minimum of 18 years old, possess a driver’s license and refrain from parking “in a way that impedes the regular flow of travel on a public way or on a sidewalk that is non-compliant with ADA provisions for clearance.” These provisional zones include a red curb, on or within 15 feet of a pedestrian ramp, loading zones and disabled parking zones. Scooters must also be upright when parked.

Scooters have shown to pose safety hazards while operational and parked. According to injury attorney Catherine Lerer of L.A.’s McGee Lerer & Associates, who has written extensively about electric scooters, the top two seen in her office are people hurt when a scooter malfunctions — when a brake line is cut by disgruntled L.A. residents, for instance, or the scooter’s main post collapses — and pedestrians tripping over the scooters. “I’ve gotten calls from elderly people exiting businesses…people leave them right outside the front door,” Lerer notes.

Even cities that aren’t yet planning to act on the scooters have emphasized that Bird and Lime should do more to ensure riders are following city rules. Area director and Education Committee co-chair of the Del Rey Neighborhood Council Wayne Neal said he believes it’s up to scooter businesses to ensure resident safety, though he adds, “there doesn’t seem to be any [scooter company] regulation in keeping the collection of these products off of the street.”

According to Neal, a common constituent complaint is scooters being left stranded after their paid time period has concluded, causing residents to be prone to injury or accidents. “Though we have not banned these scooters, local economy, safety and transportation are three focuses that we are prioritizing as we move forward,” Neal said. “The companies behind these vehicles need to take those issues into consideration as well.”