Lady Gaga wore pants to Elle magazine’s 25th annual Women in Hollywood celebration at the Four Seasons in Beverly Hills. To be specific, the 32-year-old actually wore an oversized beige Marc Jacobs suit and on a typical weekday, the outfit alone would’ve been enough to make headlines. Not Monday night.

The singer-turned-actress, generating awards buzz for her breakout turn opposite Bradley Cooper in A Star Is Born, made her way to the podium as one of the night’s honorees and delivered the longest (25 minutes) and most emotional acceptance speech, touching on everything from being a sexual assault survivor and chronic pain sufferer to a mental illness advocate and newly engaged fiancée.

But about those pants.

Fashion was the first subject to roll out in her remarks — after introductory words from friend Jennifer Lopez, whom Gaga gripped tightly during a standing ovation as tears streamed down her face — and there was a point to be made from her ensemble choice for the evening.

“I tried on dress after dress today getting ready for this event, one tight corset after another, one heel after another, a diamond, a feather, thousands of beaded fabrics and the most beautiful silks in the world. To be honest, I felt sick to my stomach. And I asked myself: What does it really mean to be a woman in Hollywood?” she explained to an audience including fellow honorees Charlize Theron, Mia Farrow, Shonda Rhimes, Yara Shahidi, Sarah Paulson, Keira Knightley and Angela Bassett. “We are not just objects to entertain the world. We are not simply images to bring smiles or grimaces to people’s faces. We are not members of a giant beauty pageant meant to be pit against one another for the pleasure of the public. We women in Hollywood, we are voices. We have deep thoughts and ideas and beliefs and values about the world, and we have the power to speak and be heard and fight back when we are silenced.” 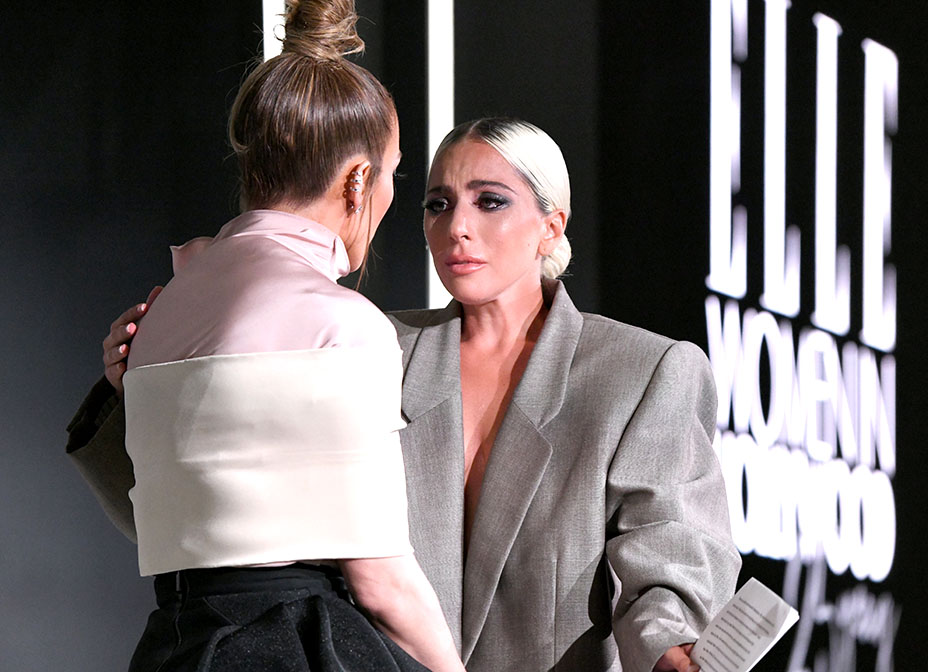 Gaga continued: “As a sexual assault survivor by someone in the entertainment industry, as a woman who is still not brave enough to say his name, as a woman who lives with chronic pain, as a woman who was conditioned at a very young age to listen to what men told me to do, I decided today I wanted to take the power back. Today I wear the pants.”

Although she has been open about her sexual assault in the past, Gaga took a deeper dive during her speech into the emotional toll it took on her.

“After I was assaulted when I was 19, I changed forever,” she related. “Part of me shut down for many years. I didn’t tell anyone. I avoided it myself. And felt shame even still today standing in front of you. I feel shame for what happened to me. I still have days where I feel like it was my fault. After I shared what happened to me with very powerful men in this industry, nobody helped me. No one offered my guidance or a helping hand to lead me to a place where I felt justice; they didn’t even point me in the direction of the mental health assistance I was in dire need of. Those men hid because they were afraid of losing their power. And because they hid, I began to hide. I hid for a long time until I started to feel physical pain. Then I had to go to the doctor because I didn’t know what was wrong with me. And then I was diagnosed with PTSD and fibromyalgia, which many people don’t think is real, and I don’t even know what the fuck to say about that. But I’ll tell you what it is. It’s a syndrome that is essentially a cyclone of stress-induced pain. And I really wish my friend Lena Dunham was here tonight, because I think she could probably articulate this much better than me. And I hope we can all agree that she’s a remarkable woman.”

Gaga then preached kindness, something she and her mother have been committed to through their Born This Way Foundation. And she also used her platform to advocate for more mental health services across the globe.

“It is my personal dream that there would be a mental health expert teacher or therapist in every school in this nation and hopefully one day around the world. Let’s lift our voices. I know we are, but let’s get louder. And not just as women. But as humans. And see that there are great men in the world. And ask them to hold our hands. For justice,” Gaga said. “We will fight for justice for women and men and those with other sexual identities. For me, this is what it means to be a woman in Hollywood. It means, I have a platform. I have a chance to make a change. I pray we listen and believe and pay closer attention to those around us to those in need. … Be a helping hand. Be a force for change.” 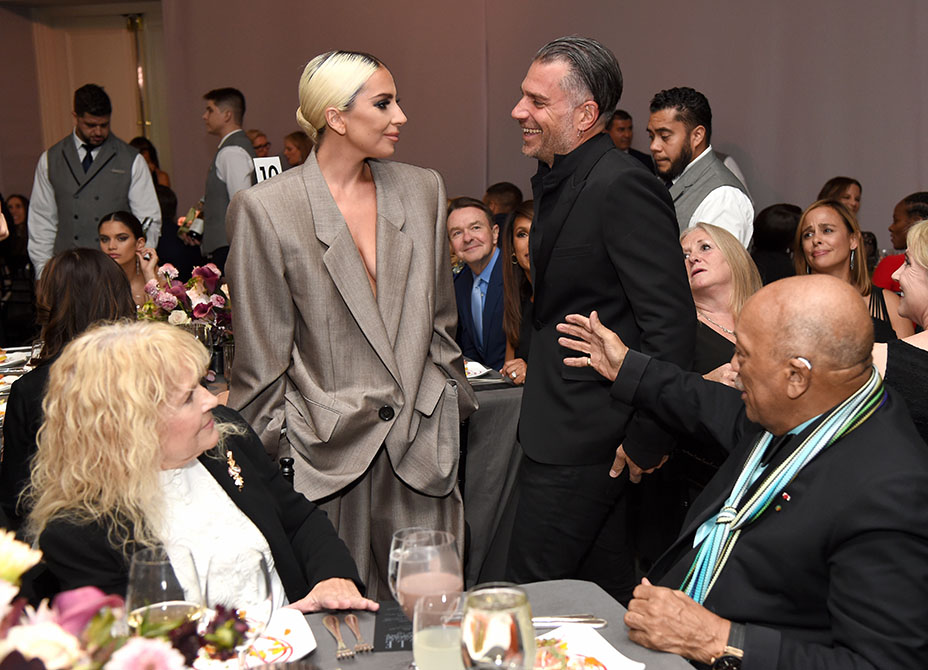 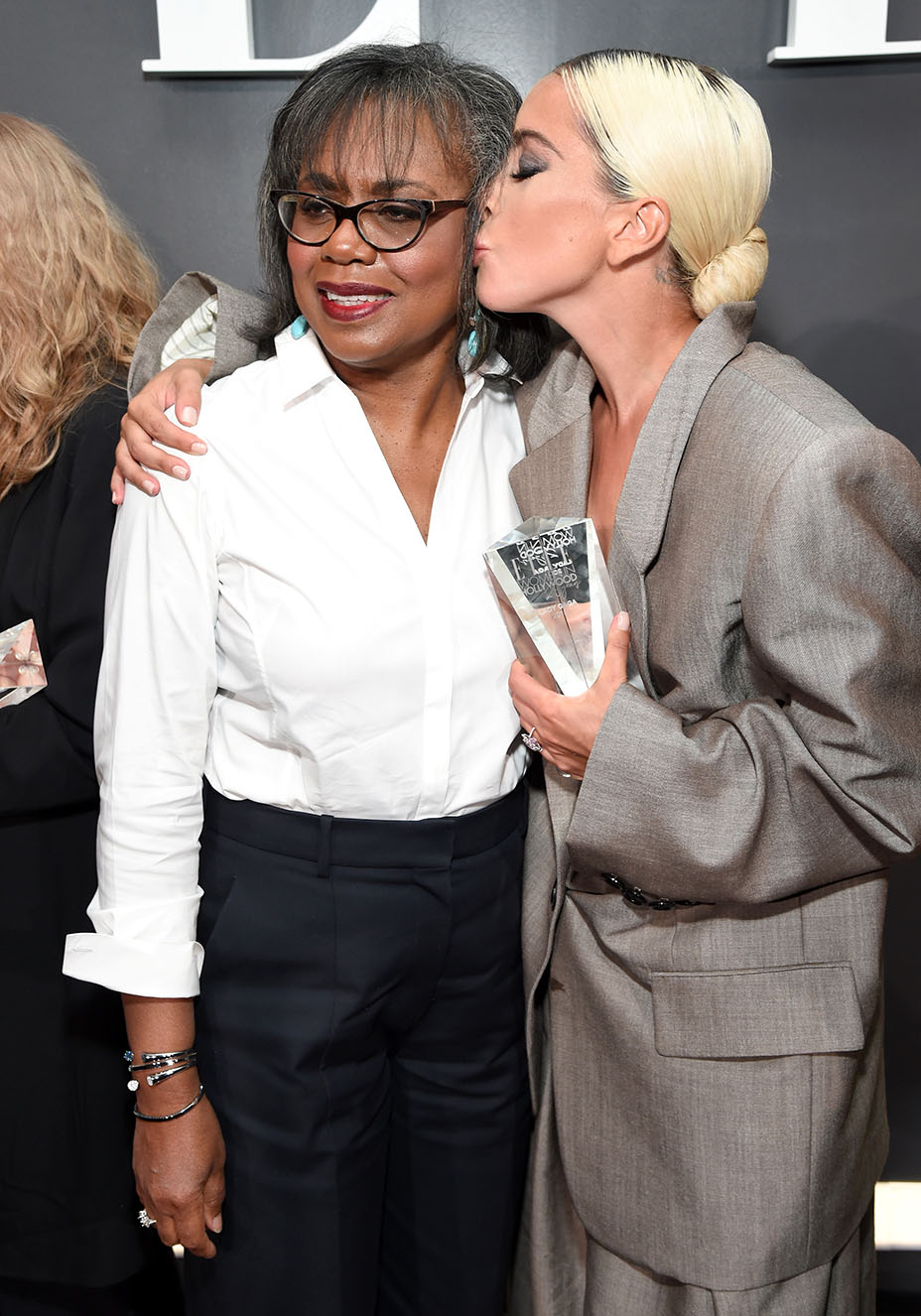 Shonda Rhimes on Her Netflix Deal: "I Am the Highest-Paid Showrunner in Television"

Sundance: Anne Hathaway Recalls Being Asked as 16-Year-Old Actress if She Was “a Good Girl or Bad Girl?”

Marlee Matlin Slams Kidz Bop at Sundance Amid Claims They Passed Over Deaf Talent Due to Interpreter Cost: "F***ing Ridiculous"