It’s been just one year since the powerhouse stylist duo of Sandra Amador and Tom Eerebout took the reins from Brandon Maxwell to lead Lady Gaga’s latest chameleon-like transformation into Oscar-nominated actress.

After a brief return to her rock ‘n’ roll style roots at the Grammy Awards earlier this month — where she sported a disco-ball-inspired Celine by Hedi Slimane gown and a bedazzled Ziggy Stardust-inspired jumpsuit — Gaga took the final bow of her A Star Is Born era at the 91st Academy Awards in a timeless black Alexander McQueen gown, in keeping with Hollywood’s biggest night.

She accessorized the gown with matching elbow-length gloves, Giuseppe Zanotti shoes and a stunning 128.54-carat diamond necklace by Tiffany & Co. last worn by Audrey Hepburn in 1962 and valued at $30 million.

“The diamond is so iconic and has such a powerful energy, the history that Audrey wore it last just made it all the more special,” says Eerebout.

Coming off a split from ex-fiancé Christian Carino (announced earlier this week), Gaga enlisted her longtime manager Bobby Campbell — who masterfully executed career coups including the Super Bowl LI halftime show performance in 2017, her breakout A Star Is Born role and dual Vegas residencies — as her last-minute plus-one. 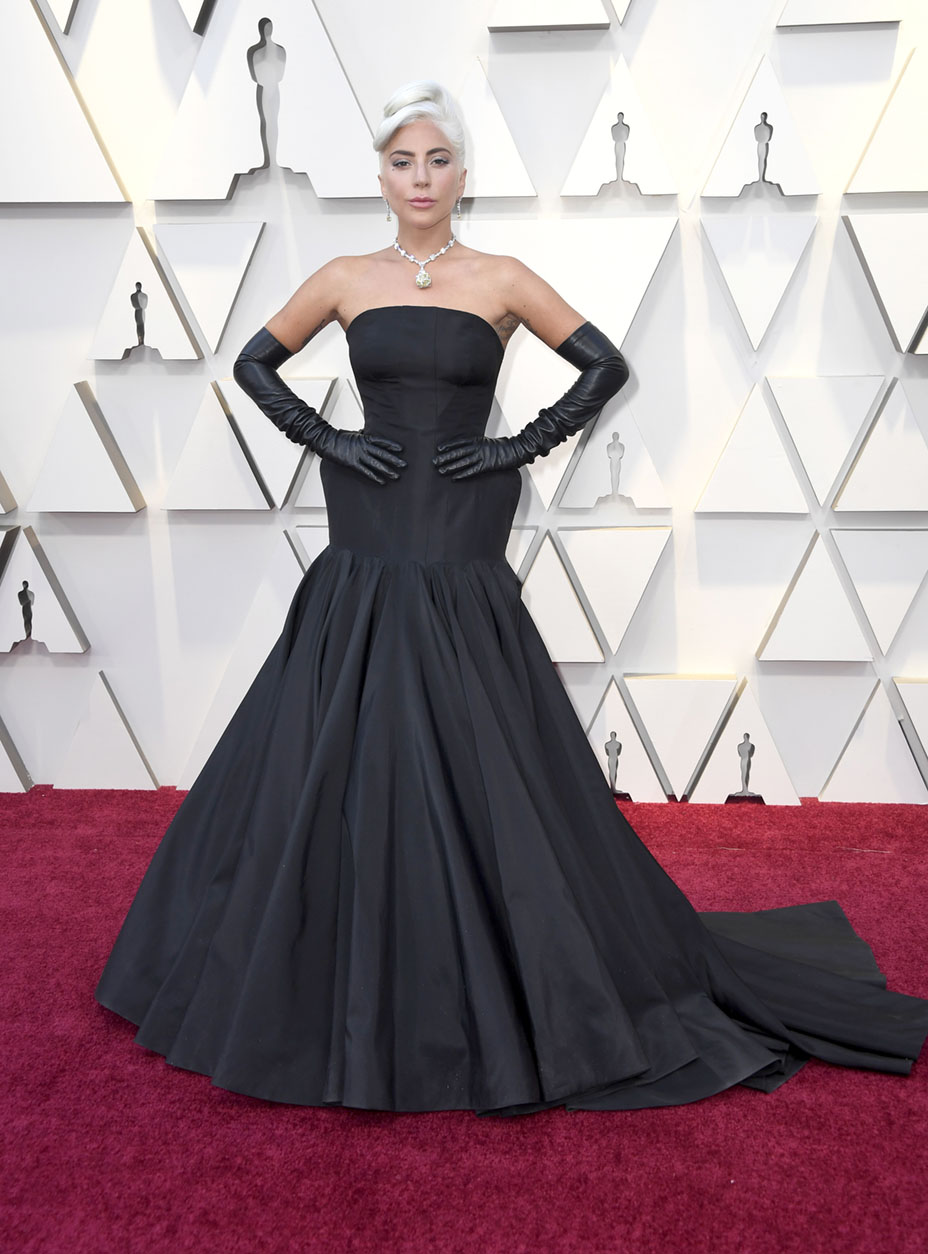 The A Star Is Born role has landed Gaga universal praise and heaps of accolades, including a shared best actress win (alongside The Wife’s Glenn Close) at the Critics’ Choice Awards, plus nods at the SAG Awards, Golden Globe Awards, the BAFTAs and more.

Gaga’s whirlwind A Star Is Born red carpet tour began with a splash at the Venice Film Festival in August, punctuated by a black bustier dress by Jonathan Simkhai, followed by a white Azzedine Alaïa gown for her two water taxi arrivals, and (for the official world premiere), she wowed in a pale pink Valentino haute couture gown.

“We’ve done so many looks this awards season and while promoting the film last year, that it is hard to pick just one as a favorite,” Eerebout told THR. “Looking back now, they were each so special in their own way and hold a special meaning to us. The amount of support we’ve received from fellow stylists and artists that we’ve looked up to for years has been extremely heartwarming and has meant the world to us. We’re so humbled and grateful to work alongside such talented individuals who cheer each other on.”

Amador has served as part of Gaga’s inner circle for nearly a decade, beginning as a styling assistant to Maxwell, while Eerebout assisted Nicola Formichetti, the star’s personal design director from 2009 to 2012. The pair (deep in the Haus of Gaga trenches) oversaw the afore-mentioned red carpet coups. Since taking over, they have shifted her visual narrative, opting for a less-is-more approach that swaps shock factor for opulent elegance — a welcome transition that coincides with Gaga’s own career evolution.

While the pair have masterminded Gaga’s Hollywood debut, they have also been deep in the weeds in Las Vegas, putting together costuming for her dual residency shows Enigma—an electro-pop rave through her biggest pop hits—and a Jazz & Piano series that showcased her Tony Bennett collaborations and her Cheek to Cheek companion album with the legendary crooner.

The jazzy set is all feathers, capes and custom designs including a black fringe and sequin gown designed by Gaga’s sister, Natali Germanotta, with a headpiece by Rinaldy Yunardi. There is also a nude Ralph Lauren dress featuring thousands of Swarovski micro-crystals, a Schiaparelli pink cape and black strapless haute couture gown, and a Ralph Lauren black lamé tuxedo jumpsuit.

“We are so fortunate to have an amazingly talented wardrobe team on the Vegas shows and they truly were the key support we needed to balance and jump between projects as they were all happening at once,” adds Amador. “We love and enjoy both the music and film industry and everything that comes along with it. Designing and styling for performances is very different from the red carpet world. There are so many other aspects that need to be taken into consideration for costumes and it requires such intensive planning and precision. We really had to look at each project as its own individual entity.”