In March, Helene Henderson, owner and chef of Malibu Farm — the organic restaurant on Malibu Pier that serves the likes of Kate Hudson and Sean Penn — received an unexpected invitation from Oracle founder and chairman Larry Ellison to visit Lanai, the Hawaiian island he bought in 2012. “I met with Larry, and he asked how quickly I could get a Malibu Farm up and running, to which I said, ‘In six days.’ I went back, gathered a team of four people: a barista, who’s my son, a manager and two chefs,” she recalls of her travels to Four Seasons Resort Lanai at Manele Bay, which had just reopened after an eight-month closure and a reported $450 million face-lift. Six days after arriving the second time, Henderson unveiled her chic poolside outpost at the 217-room hotel.

This last-minute addition was a critical final step in Ellison’s efforts to turn Four Seasons Lanai into a sustainable luxury paradise with the specific comforts of home. In 2012, Ellison made waves (and provoked eye rolls) when he announced he was buying 98 percent of the island for a reported $500 million to $600 million. With 90,000 acres, two Four Seasons resorts (there also is The Lodge at Koele, a mountain retreat temporarily shuttered to house renovation workers that will finish its own remodel in early 2017), three golf courses and only seven-hours’ (indirect) flight from Los Angeles, the private isle always has been positioned to attract Hollywood — it just needed a little finesse. “People are looking for that old Hawaii experience that doesn’t exist anymore,” says hotel GM Tom Roelens. “Lanai is truly unique: You come to the island and have the place to yourself.” 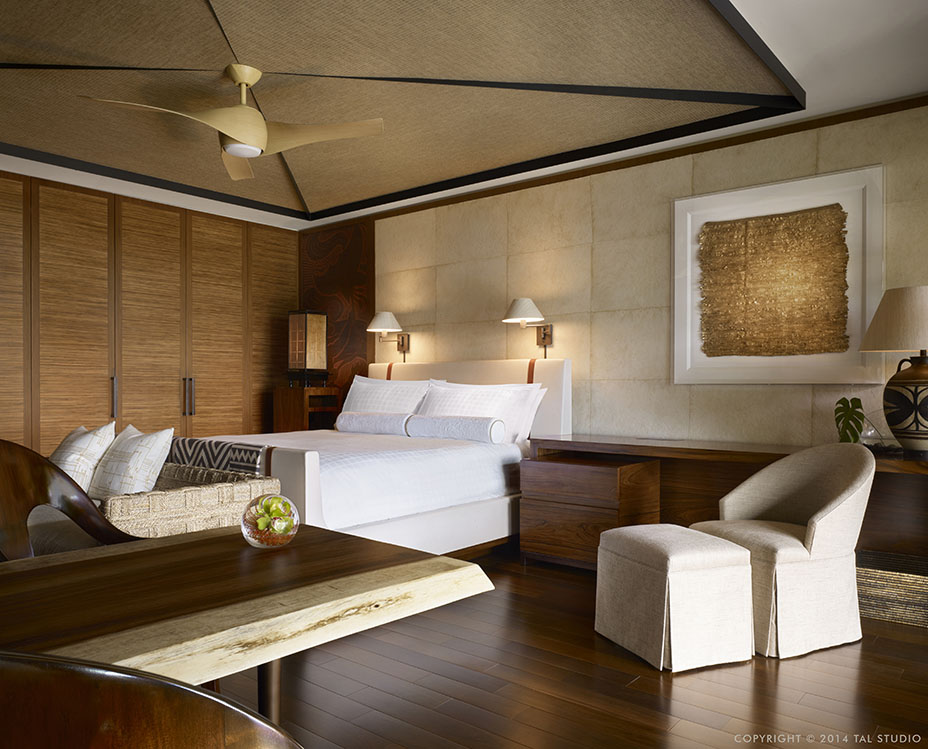 Post-remodel, the number of guest rooms went from 236 to 217, accompanied by a 75 percent hike in starting room rates.

Ellison, 71, worked with original resort developer Kurt Matsumoto and designer Todd-Avery Lenahan to replace dark, old-fashioned Asian interiors with a warm wood palette, repositioning the lobby to frame Hulopoe Bay from its dramatic cliffside perch. Two new pools were added, and an upgraded fitness center, professional-grade tennis courts and renovated spa are in the works. The billionaire also brought in a Nobu (he is the property owner of the Carbon Beach location, down the street from his Malibu residence) with film producer and Nobu principal (alongside Robert De Niro) Meir Teper. He also had the guest rooms (from $960 a night) enlarged, with the jewel in the crown being the 5,137-square-foot Alii suite ($21,000 a night), which includes three bedrooms, a formal dining room, a double Japanese soaking tub, steam shower and panoramic views. Witnessing the developments were Oprah Winfrey, spotted meeting with Ellison in 2012, and Tom Cruise, who has visited multiple times, including in 2014, when he was seen with Ellison’s son, World War Z producer David. Post-reopening visitors include Will Smith, Cindy Crawford and Jessica Alba. “People are definitely paying more attention,” says talent manager and Wailea resident Shep Gordon. “When you rent a room there, you rent an island. But to have that experience and eat at Nobu? I mean, it’s as good as it gets.”

In 1922, James Dole bought Lanai from the family of Walter Gibson, leader of a Mormon offshoot colony, for $1.1 million, developing it into the world’s largest pineapple plantation. American businessman David H. Murdock purchased Dole’s parent company, acquiring the island in 1985, and opening the two resorts and a cliffside Jack Nicklaus-designed golf course by 1993. “In those days, Lanai had a little aspect of Vegas, in that what happened here, stayed here,” says Gordon, recalling golfing trips with Michael Douglas and dining with chef Emeril Lagasse. “It was a secret hideaway. Every time I went, I felt like I was king of the world.”

The island has hundreds of miles of bare beach, a cat sanctuary with 440 rescue felines and one gas station.

With most roads still unpaved, no traffic lights and nonexistent paparazzi, privacy is ensured. When Bill and Melinda Gates wed on the 12th hole of the Manele golf course in 1994, an AP reporter and photographer were discovered and put on a plane to Honolulu. “Celebrities can be absorbed into the community with no fuss,” says Alberta de Jetley, founder of the Lanai Today newspaper, who notes that the majority of approximately 3,200 locals work for the resorts. (Before Ellison purchased it, Lanai had been losing Murdock up to $30 million annually, causing an economic downturn with high unemployment and a dismantled Chamber of Commerce.) Over the years, a small number of estates have been built: Sigourney Weaver recently bought a house in town, and George Lopez purchased a sprawling waterfront home in 2006, which he sold in 2012 for $4.15 million to Ellison to live in.

Why Renting an Island Is Better Than Buying One

It is not surprising — with superproducers Megan and David as children — that Ellison’s plans include a documentary film festival focusing on socially minded content, scheduled to launch in 2017. Along with long-range initiatives including seawater conversion, solar energy, a university and an expanded airport — to be overseen by management company Pulama Lanai — Ellison will open film studios. Tucked within a 196-page document being reviewed by Maui County are plans to construct warehouses and lots along 22 acres on the west side of the island. The idea dates back to 2008, when director Julie Taymor chose Lanai to shoot The Tempest, starring Helen Mirren. Then-owner Murdock became so enthralled with the process, he drew up a proposal for a facility that would double as a tourist attraction, with Ellison executing it nearly a decade later.

The mogul also spruced up main street, repainted homes and businesses, added football and soccer fields, rebuilt the long-shuttered community pool and restocked main grocery store Richard’s Market with organic food, converting even once-skeptical islanders. “He’s been into every business in the square,” says art gallerist Mike Carroll. Then there is the tiny 90-year-old two-screen movie theater that Ellison restored into a state-of-the-art cinema that showcases new releases like Star Wars: The Force Awakens. “The next day after it opened, I saw Mr. Ellison out front,” adds Carroll, who notes that people ferry in on the 45-minute boat ride from Maui to see films there. “Now going to the movies is fun again.”

A dish at Nobu, designed by the same architects behind the Malibu hotspot. The town has six other restaurants and a poke? market that sells out of freshly caught fish by noon.

This story first appeared in the Aug. 5 issue of The Hollywood Reporter magazine. To receive the magazine, click here to subscribe.