While Fox’s dance competition series has been a strong contender in the choreography category for the past few years (it has won seven Emmys), it has outdone itself this year, landing four of the five nominations. The show, now in its 14th season, sees Mandy Moore, Christopher Scott, Travis Wall and Al Blackstone all nominated (Blackstone is a first-time nominee, while the rest have been nominated before).

The fifth and final nominee in the category is Chloe Arnold, choreographer for CBS’ The Late Late Show, who was discovered as a teenage tap dancer by Debbie Allen and has gone on to work with dancers on So You Think You Can Dance and Good Morning America. She’s nominated for “Crosswalk the Musical: The Greatest Showman” starring Hugh Jackman, Zac Efron and Zendaya.

Arnold creates stage-quality performances for bits on the ?show ranging from “Inappropriate Musicals,” where Corden and A-list guest stars enact their own takes on scenes from hits such as Stranger Things and The Shape of Water, to “Toddlerography,” in which 3-year-olds teach their own dance moves to stars like Jennifer Lopez and Gwyneth Paltrow.

Arnold spoke with THR about collaborating with “triple threat” James Corden and producing “live theater at its finest” for a comedy show.

What has it been like working ?with James Corden? Have his performing talents surprised you?

He is a tremendously quick study. Every time a new cast of dancers meets him for the first time, their jaws drop. ?And everything moves at ?the speed of light. We get a day, maximum two days to prepare for a shoot, sometimes it’s day-of. I love that James is such a risk taker; he ventures into these really challenging things.

This nom recognizes your work on the “Crosswalk the Musical” with the Greatest Showman cast. What was it like creating that bit?

This was the dead of winter, we had no time, and it was still so great. On Hugh Jackman’s Instagram I saw a video of him practicing in his car! He was practicing the dance moves, which just shows the level of respect that they have for these performances.

That one concluded with a tribute to Debbie Allen, right?

When I got the list of songs and I ?saw “Fame” was on there, I was ecstatic because Debbie Allen is my mentor, she’s how I got into this. She really taught me the importance of versatility. It was such a beautiful opportunity to pay homage to her. I was also able to hire ?a lot of dancers that she trained, so that was a lot of Debbie Allen love and representation in that number. 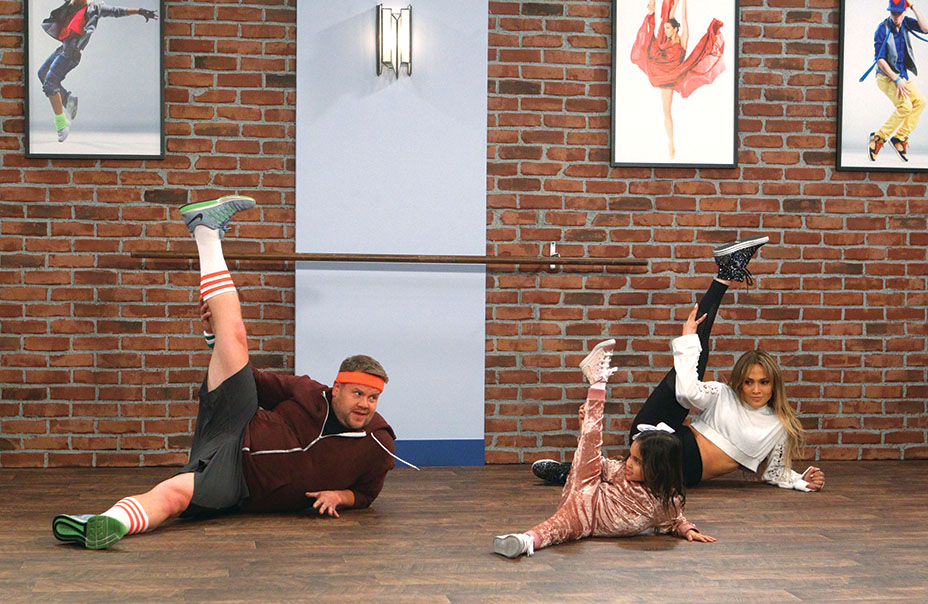 You also work on the “Toddlerography” segment. How exactly does that work?

We pick some really awesome young talent — they range in age from 2 to 5 — and I have a process with them that really works. I want them to think this is the most fun thing they ever did, so I set up toys and we just play, then we tell them we’re going to play a dance game, and we skip over to the studio and we describe it as playing follow the leader, and they get to be the leader. And then we introduce some new friends, and one’s name is James, and one is Miss Gwyneth [Paltrow], or Miss Jennifer [Lopez], and the kids get excited and just move. Sometimes if they get frozen, I’ll stand in front of the camera and they can follow me — and of course their version of that is they do whatever they want — it’s hysterical because interpreting a child’s moves is just the best. But there’s a whole process for me getting them ready so that they’re comfortable with the grownups who they’re meeting for the first time.

Did you and your team have any ideas for this year that you just couldn’t pull off?

Thus far, no. Nothing.

I remember one show. I got a call at noon to ask if I could bring four dancers by 2 p.m. to tape at 5 p.m. for a full number, so we had asked for Pride flags and we needed feathers and tons of props and by 2 p.m., I had all the dancers, they had the props and we got it done. It was crazy.

What would surprise people about your role?

It’s really a dream job — we don’t do anything halfway. So when we’re doing “Crosswalk the Musical,” we bring sets that would normally take a lot of time to put up, and we’re going to do that all in 45 seconds. That is the real timeline for that full dance number. So we have time trials where we have a producer with a stopwatch who’s like “OK, run!” and it feels real. It’s really live theater at its finest.