Late night hosts have spent the past three years adapting to the news cycle of the Trump era, and now they find themselves contending with a rapidly approaching presidential election, with a massive field of Democratic candidates. For most of the hosts, that process starts with reflecting on lessons learned from the 2016 cycle.

“As a front-facing part of this network, I’d like to plant a flag in it a little bit more than we did last time,” says TBS’ Full Frontal host Samantha Bee. “We’ve been through one election cycle. We can learn from that and grow with it and try to have fun with it, if that’s humanly possible.”

Hasan Minhaj relies on his personalized take on real issues — such as civil rights, immigration and censorship — to draw people into The Patriot Act, his Netflix series that debuted in October. “One of the biggest strengths of the show is that my point of view very much comes from being an insider and outsider to America,” he says. “I’m born and raised here in the States, but as an Indian American Muslim, I’ve oftentimes felt like I’m playing an away game. Coincidentally enough, that’s the way the rest of the world looks at America too — they also have this view of, ‘Yo, what the hell is going on with you, America?'”

This question is reminiscent of Bee’s shock and outrage over the outcome of the 2016 election. “How did everyone get this so spectacularly wrong?” the comedian asked at the time, following up with, “America is a great country worth fighting for.”

Bee now hypothesizes that there will be fights on many fronts. “The stakes feel very high for the citizenry of this country. It’s going to be a longer process for us.” Evoking what sounds like a Game of Thrones catchphrase, she says matter-of-factly, “The journey will be long and hard.”

The journey begins with a whole new crop of presidential hopefuls. Though there are currently 23 Democratic candidates, the most popular among late night bookers seem to be Elizabeth Warren, Kamala Harris, Bernie Sanders, Cory Booker, Beto O’Rourke and Pete Buttigieg. At this point, most hosts seem open to inviting any of the Democratic contenders on.

“Typically we ask them all or we ask a lot to appear on the show,” says Bee. The Daily Show‘s Trevor Noah echoes that sentiment. “We’ll have any candidate on,” says Noah, who landed his first Emmy nomination for his Comedy Central show in 2018. “Ironically, when I first started, more Republicans came to my show than Democrats. Then, since Trump, we haven’t had a single high-ranking Republican who is still planning to stay in the administration.”

Lately big names have flocked to late night opportunities. Harris teased her interest in running for office during her interview with Stephen Colbert in January. That same month, Kirsten Gillibrand announced her 2020 run on The Late Show, explaining to Colbert that she would strive to restore “the integrity and compassion” of this country. And Sanders visited with Meyers in March, saying that even among the competing candidates, “to defeat Donald Trump, that is most important.” Shortly after launching his campaign for president, Buttigieg appeared on The Tonight Show and participated in Jimmy Fallon’s “Slow Jam the News” segment. Striking a serious note, Buttigieg declared, “It’s time for a new generation of leaders.”

With the possibilities for political commentary so wide, Noah says he’s learned from criticism during the past election. “If I see Trump say something that I think connects, I’ll tell the people. If I see Trump do something good, I’ll tell the people.” And he jabs at Democratic candidates without a moment’s hesitation. “Before, if I said any bad thing about Bernie Sanders, people came at me like I was the Antichrist. If I dared to question Hillary [Clinton], people berated my show like we should go back to Africa.”

In the past three months, Noah has talked with Buttigieg about how his role as mayor in Indiana has prepared him for the White House, with Sanders about tax returns and health care and with Harris about inherent problems with Trump’s proposed border wall, cutting to the core of each candidate’s mission as a presidential hopeful. Says Noah, “I am now no longer afraid to say what I see.” 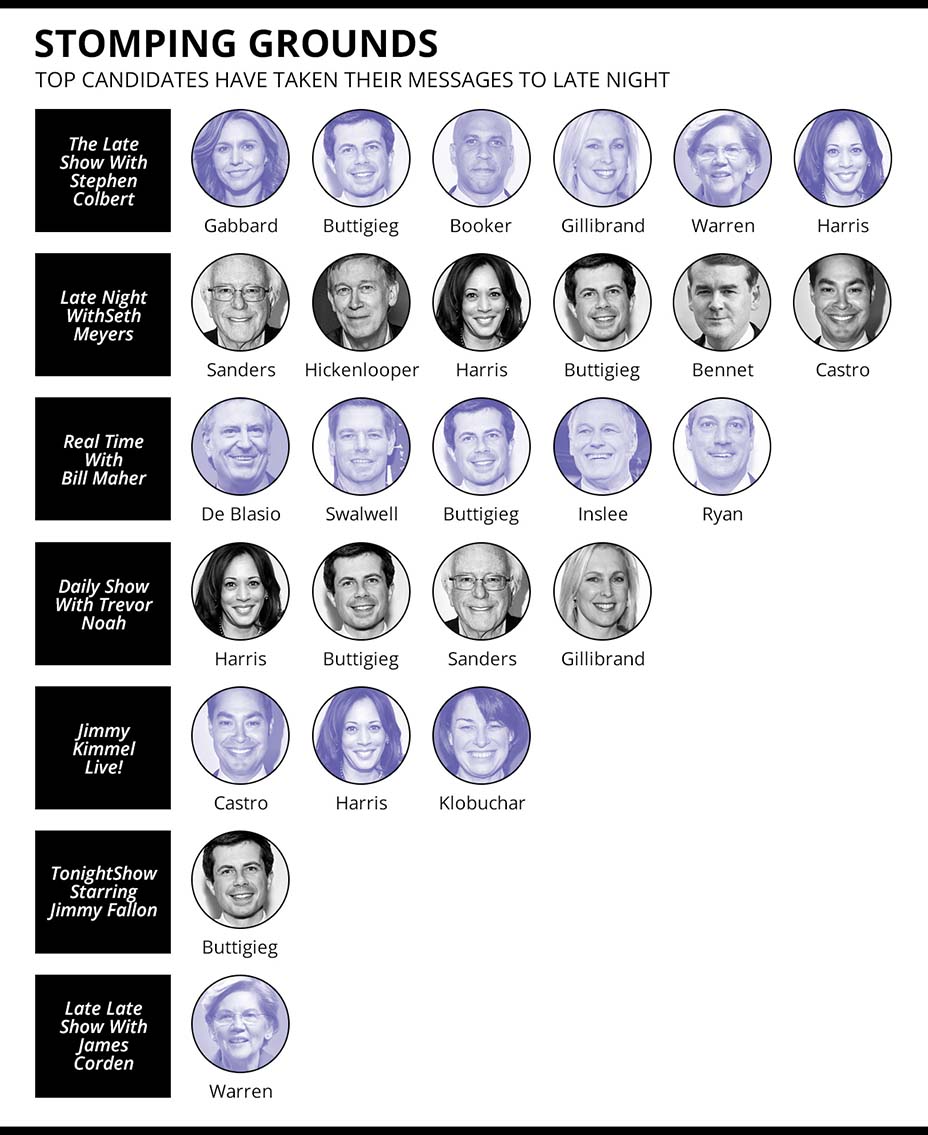