The Late Show With Stephen Colbert held a Daily Show reunion on Tuesday, getting (most of) the group back together after years away from their Comedy Central roots.

The show opened with Stewart making a large Italian sub sandwich for current Daily Show host Trevor Noah, who was impatiently smashing a series of buttons waiting on Colbert and Stewart to deliver his lunch to him on silver trays.

Later, Colbert flashed back to his last day at the Daily Show offices in summer, 2005. The future Late Show host-to-be, sporting a soul patch, stood with a box gathering his belongings. “There comes a time when a man has to do something different,” Colbert said wistfully. “The same character, half an hour later, half a block away.”

Bee then entered, with a perm and sequined jacket, to lament Colbert’s departure. “I can’t believe you’re leaving right in the middle of the George W. Bush administration. There’s never going to be another president this good for comedy,” she said.

Corddry and Helms then entered, the former with a full head of hair and the latter with a trucker hat and mustache, to fight over the exiting Colbert’s office. Next, Oliver appeared, though he was adamant that he was fellow former Daily Show correspondent, Steve Carell, proving his claim by saying he had “an unbroken line of body hair from my eyebrows to my ankles.”

Stewart was the last to arrive, when he popped out of a refrigerator to congratulate his former showmates on “spreading their wings” before concluding their meeting with their “usual pre-show prayer”: a all-hands-in cheer of “Go, liberal agenda!”

The show took on a more traditional talk show format after the initial reunion, as Stewart sat down with Colbert to talk about Trump’s firing of FBI director James Comey. Colbert chastised the crowd for having initially cheered for the news, which Stewart compared to people who first learn how to surf and catch a wave, only to fall in a heap.

When asked whether he missed hosting a late-night program, Stewart was content in his new role. “The things that I’ve gained in times spent with family and things like that, I would not give up.”

The duo also talked about Fox News host Bill O’Reilly’s recent ouster. Stewart recalled doing O’Reilly’s show and, when leaving, “You would see little heads popping out of offices, almost like the scene in [Indiana Jones and the Temple of Doom] where the children in the mine begged ‘take me with you.’ “

Stewart, who also serves as an executive producer on The Late Show, has appeared with Colbert on his late-night show several times, delivering an impassioned plea to the media in the Trump era, mocking the president’s executive orders back in January and urging people to vote just before the election.

Several members of the group are busy on their own comedy shows now. Oliver has made his way over to HBO, now hosting Last Week Tonight. Bee, who just hosted her Not the White House Correspondents’ Dinner in Washington, D.C., now hosts Full Frontal on TBS, home to her husband Jason Jones’ (another Daily Show alum) The Detour as well.

Finally, the Daily Show alums all convened on center stage to have a group discussion. “It looks like a morning show,” Colbert joked.

“I think the thing I’m most proud of in the Daily Show is the diversity,” Stewart quipped.

The group talked about the audition process (“I found out later they broadcast the tape throughout the studio,” Corddry recalled) and relived some of their earliest moments on the Comedy Central show in a series of clips, including footage of Oliver breaking his nose while covering a Civil War reenactment.

“I had to flee the Klan one night,” Colbert remembered.

The reunion ended with the group thanking and applauding Stewart for giving them their first real break and setting up their careers.

“This was what it was like to hang out backstage for years at the Daily Show. It was the greatest experience,” Colbert said. 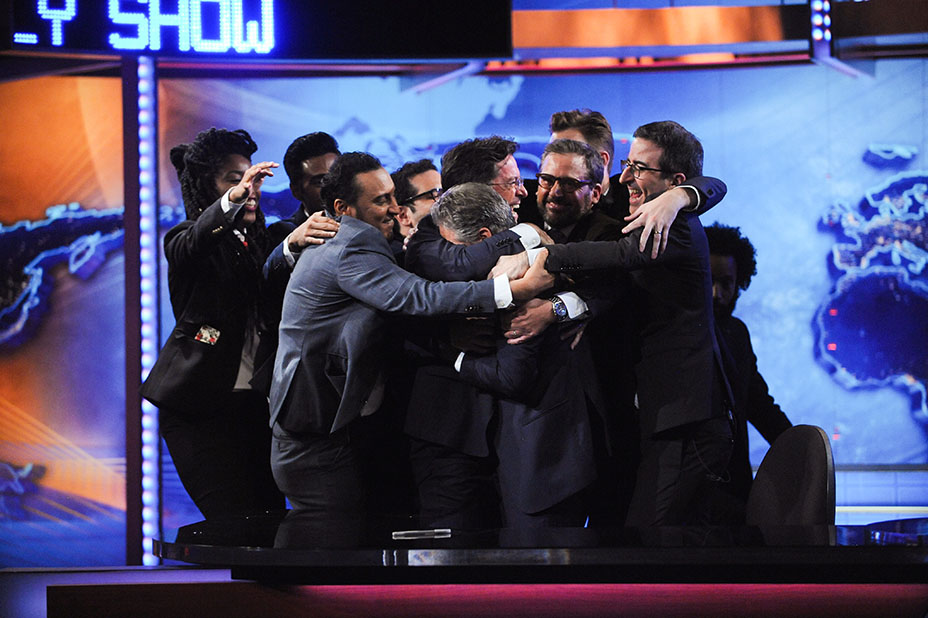