The last few months have been something of a whirlwind for novelist Rumaan Alam with his upcoming third novel Leave the World Behind garnering critical praise and award attention, as well as already securing a Hollywood adaptation.

Prior to its Oct. 6 publication date, the book has been longlisted for the National Book Awards, been dubbed as one of the most anticipated books of the fall season and secured a buzzworthy Netflix adaptation with some big stars behind it.

Sam Esmail, the creator of Mr. Robot and Homecoming, is set to write and direct the adaptation. Meanwhile, Julia Roberts and Denzel Washington are attached to star, reuniting for the first time since 1993’s The Pelican Brief.

Alam, 43, calls the positive response a “charmed run” he’s been blessed to experience.

“Writing a book, it’s like a very sustained leap of faith and you just don’t know how it’s going to land until it lands. I don’t take any bit of this for granted,” Alam tells The Hollywood Reporter ahead of his book’s publication. “I didn’t know when I started writing the book, what was going to happen to it and that’s how it feels every time you begin to create a project. So to have it seemingly be going really well is wonderful,” he says.

Negotiations for the book’s adaptation took place over the summer, and while involved in conversations, Alam admits he didn’t think a deal to turn his novel into a film would become a reality. “I just assumed it was never really going to happen. And so the fact that it actually is now going to happen, it’s thrilling. It’s really brilliant,” he says.

Though Alam will not be involved in the cinematic adaptation, he assures his story “could not be in better hands” than with Esmail. “It’s a little like saying to somebody, ‘I need someone to play this tennis game. It could be Serena Williams or it could be you.’ Who would choose me in that particular situation?  Even I wouldn’t choose me,” he tells THR.

With ample praise and anticipation, it’s easy to understand why the book was at the center of a reported hefty bidding war among streamers and studios. The book feels eerily prescient, exuding the unnerving, claustrophobic psyche of 2020 across its 241 pages.

Leave the World Behind (Ecco) centers on a middle-class white family embarking on a getaway to a remote rental in Long Island. While getting some rest and relaxation, things take a weird turn when the wealthy Black owners of the rental, Ruth and George (also known as “G.H.”), return late one night to inform Amanda and Clay that there has been a sudden blackout that has swept New York, resulting in no cell service or internet connection. Unsure what to believe, Amanda and Clay are forced into a tense living situation with a stranger couple while panicked about what is actually occurring in the outside world.

For the story, Alam was inspired by his family’s summer getaway to an Airbnb in 2017 that he described as a “fantasy week” that was “isolated.” “I latched onto the notion of wanting to write about that vacation specifically, but turn it from being a book about a family on vacation to being a book about something much bigger,” he explains.

Already having published That Kind of Mother (2016) and 2018’s Rich and Pretty, for his new book, Alam hoped to apply his knowledge of “pacing and structure and better meet a reader’s expectations for narrative.”

Though the book was written pre-pandemic, it encompasses a lingering fear of the unknown that has now become all too familiar. What is happening in New York? Is an apocalypse happening? The novel’s unsettling chill and fear becomes an itch unable to be scratched. The story eliciting “a powerful, emotional response” for readers was an intent of Alam’s. Even if not much action takes place, he notes, “somehow within what is easy to summarize as nothingness, there is a feeling of something” and, as he teases in the novel, “something is happening, something bad is happening” — readers just may not be sure what.

“I wanted the reader to fill in the blanks with their own more profound fears,” he says. “So rather than tell you there’s a monster under the bed, I’m allowing you, I hope, to visualize that monster under the bed is the thing which you find most unsettling, whether that’s climate change or political disaster or war or other forms of violence.”

The book’s echoing of the speculative terror existing in the present is purely perchance but Alam says the story is “reflecting a reality.” “The work feels, to me, very grounded in realism because that’s what it is to live right now. We’re sort of all negotiating very abstract ideas and fears and we don’t really have all the information. It’s very hard to say exactly why we are feeling the way we’re feeling this particular moment.”

On the surface, Alam says, the book has the “metabolism” of the thriller genre (expect short chapters, an addictive pace and sense of mystery) but below the surface readers can notice underlying themes of race, class, privilege and humanity.

Amanda and Clay are quick to showcase their entitlement as they can’t comprehend how G.H. and Ruth could own the wealthy house that they found escapism in. (“This didn’t seem to her like the sort of house where Black people lived,” reads Amanda’s internal dialogue). In another moment, Clay considers how he is “not good with Black faces.” “They all look the same to me,” the character thinks. Meanwhile, Alam writes G.H.’s first encounter with the couple as, “He held up his hands in a gesture that was either conciliatory or said Don’t shoot. By his age, Black men were adept at this gesture.”

The unconscious racial biases and uncomfortable prejudices displayed by the characters coincidentally resonate as the book is also being released amid nationwide calls for racial equality.

“These have been concerns in the cultural atmosphere for a long time. These are not fresh ideas. People were talking about police violence and Black Americans for decades. If it’s at a crisis point now you have to acknowledge that it’s actually been at a crisis point for a really long time. And so it makes sense that we would see that in art and in the culture,” Alam says.

As for the story dramatizing people feeling trapped while being released amid an ongoing pandemic, Alam is aware the present moment “kind of literalizes the metaphor that’s happening inside of the book.” But expect the uncomfortable when reading, which the author assures can result in laughs “for the particular kind of discomfort” and “unsettling familiarity.”

“Part of what is funny or part of the impulse to laugh is in the discomfort or the recognition,” he says, citing a moment when Amanda tells G.H. he looks like Denzel Washington as an example. “She herself knows that that is not an appropriate thing to say to somebody who happens to be Black or of a certain age. But she said it anyway and she can’t stop herself from laughing at herself.”

With three books now under his belt, Alam says he is hopeful he can continue to push himself with his storytelling and writing, but don’t expect any new projects yet as the author says laughing, “unless you count getting my kids through third grade and sixth grade.” Excited for readers to finally get a chance to read his new work, Alam assures he doesn’t have any wishes other than for those who pick up the book to embrace the story in the way they see fit.

“My chance to shape what that is has already happened on the pages of the book itself,” he says. “I’m actually really excited. I feel like a book doesn’t exist until someone reads it.”

Leave the World Behind is out Oct. 6. 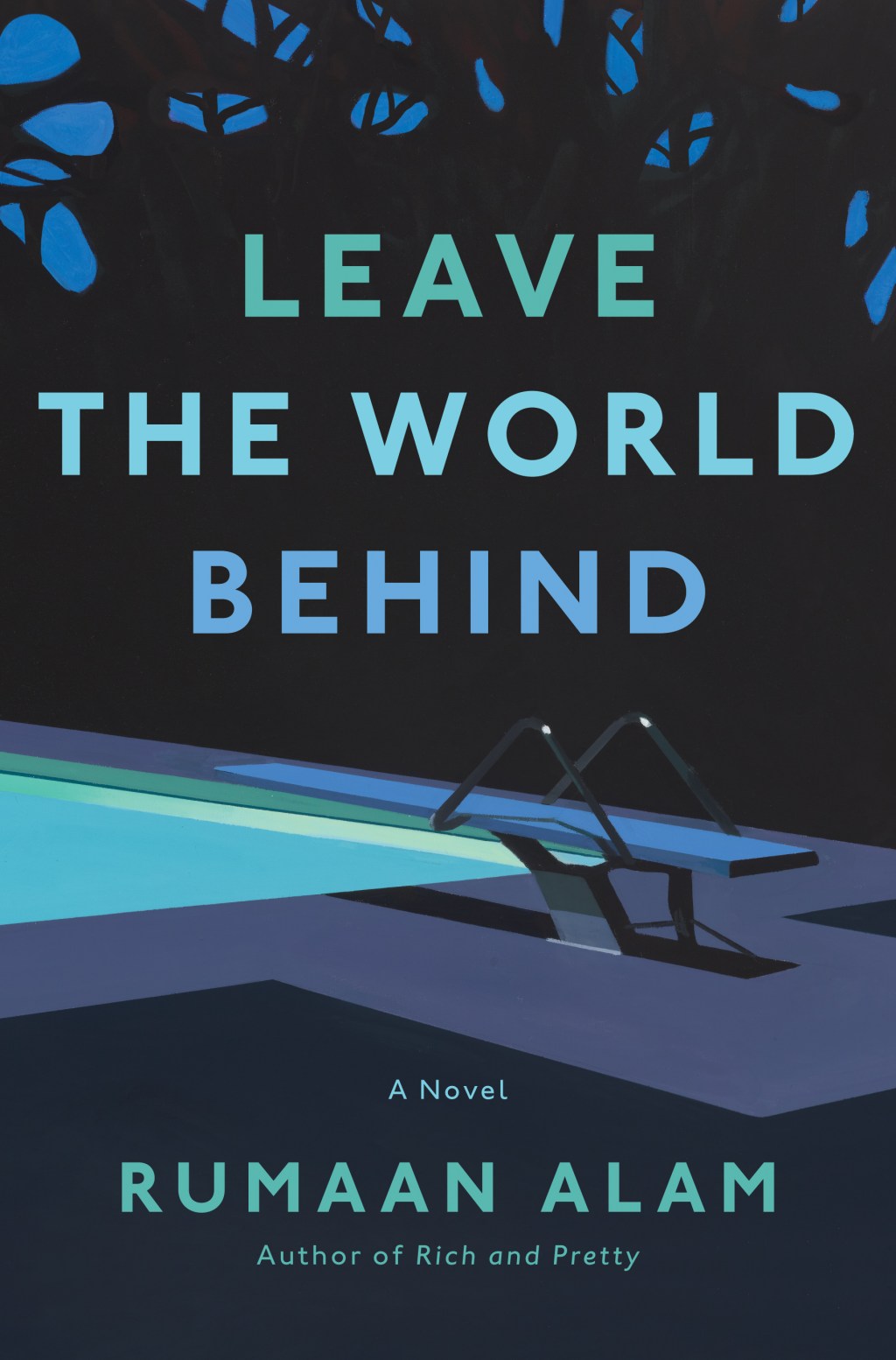 Julia Roberts, Denzel Washington to Star in Netflix Thriller 'Leave the World Behind'