LeBron James is gearing up to head back to the Magic City — not to shoot hoops, but to open the doors of his new experiential flagship store. The former Miami Heat player is set to open an Unknwn concept space, a branch of the sneaker and streetwear store Unknwn that he opened at the Aventura Mall in 2011 with his childhood friends and business partners Jaron Kanfer and Frankie Walker Jr.

The new 10,000-square-foot flagship store at 261 NW 26th St. is outfitted with an in-house photo studio complete with a prop house, art installations and a courtyard for “sporting and lifestyle events for the Miami community and global travelers,” according to a press statement, and is slated to open in early December.

James, Kanfer and Walker (who met at a basketball camp in James’ hometown of Akron, Ohio) opened the first store with a view to connect brands to consumers through experiences and curated products. The shop has become known for its well-edited mix of rare sneaker drops, streetwear launches, brand collaborations and designer apparel and accessories from the likes of Comme des Garcons, Fear of God, Thom Browne and John Elliott.

In late 2011, Unknwn introduced graphic t-shirts and hoodies under a private label called Sport. In August, the trio collaborated on its second line, an upscale travel-friendly range of loungewear dubbed Hôtel, featuring socks, underwear, T-shirts, hoodies, shorts, track pants and sandals, available exclusively at Uknwn. There are plans to continue to grow the private label collections. 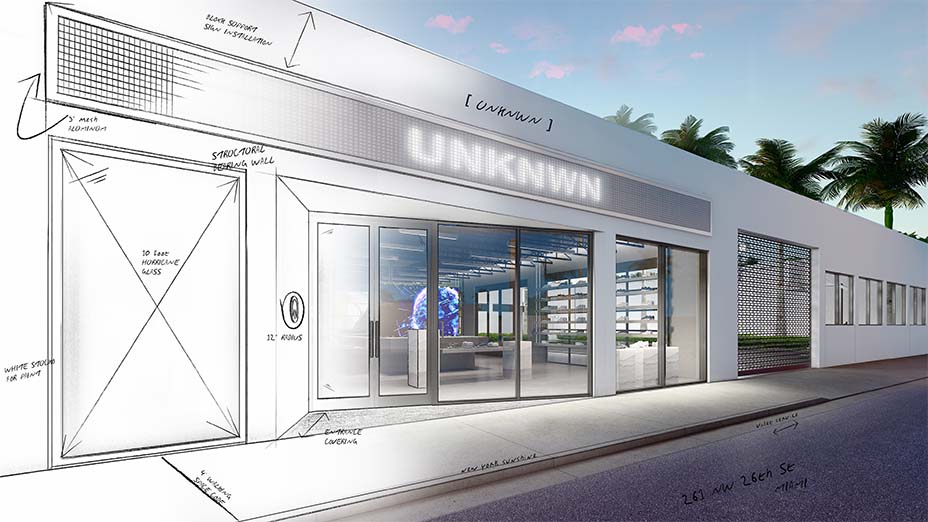 The new flagship is being designed by New York Sunshine, the fashion-meets-art collective that has worked on campaigns such as Virgil Abloh’s Off-White x Vlone. The goal was to create a one-of-a-kind concept space that reflects the owners’ lifestyles and is inspired by where they live — Kanfer and Walker in Miami, and LeBron in Los Angeles —and where they travel.

Standout features include 175 feet of shelving to display about 175 pairs of sneakers, custom water installations and over 200 feet of mural wall space for artists. Personal shoppers are also available by appointment. The location in Miami’s Wynwood Walls area, surrounded by murals from some of the world’s best street artists, will fittingly be unveiled with a series of events during Art Basel Miami in December.

James is reportedly not involved in the day-to-day running of Unknwn, but the Los Angeles Lakers forward and former Cleveland Cavaliers star keeps adding to his interests outside of the court. He currently is filming the sequel Space Jam 2, alongside Bugs Bunny, and is also funding a public school in his hometown.