LeBron James is set to play his first game as an L.A. Laker on Oct. 18, and whether he can help restore the team to its former glory remains to be seen. But one thing is for sure: he’ll look damn good trying.

On the eve of New York Fashion Week, James and his fashion sense will be honored at Harlem’s Fashion Row show and event on Tuesday, where he will receive the Icon 360 Award recognizing both his style and philanthropy at an awards dinner focused on creating more opportunities for minorities in the fashion industry. The event is being presented by Nike, which last December signed James to a lifetime contract worth north of $1 billion.

“LeBron is showing men it is acceptable to be fashion-forward and masculine,” explains Harlem’s Fashion Row founder Brandice Henderson-Daniel, who is recognizing him alongside designer Dapper Dan, activist Bethann Hardison and stylist Jason Rembert. “Men who watch sports are learning about the fashion industry by seeing what the athletes are wearing to games and press conferences.”

Since joining the NBA in 2003, James has been through a style evolution, from early aughts bad boy in baggy suits, to gingham-loving prepster in the 2010s, before settling into his current tailored aesthetic with a nod to minimalist cool, mixed with accessories by Hermes, Off-White and more.

He has sparred publicly with President Trump, and is not afraid to get political with his clothing choices. For last season’s opener, he debuted a pair of Nike “Equality” sneakers, with proceeds going to the Smithsonian National Museum of African American History and Culture.

Great morning to all! Basketball is our vehicle but equality is our mission – stand for something positive and do what you can to make a difference!! Proud to announce we’re dropping the “Equality” PE. There’s always a personal connection with a drop – this one goes beyond basketball. Proceeds go to the Smithsonian Natl Museum of African American History & Culture. #Equality #StriveForGreatness #IWillNotShutUpAndDribble

But even as he’s been fronting sold-out Nike sneaker drops, James’ high fashion influence has been growing. In May, he orchestrated the watershed moment of NBA tunnel walk as menswear catwalk before game one of the NBA finals, when he led his Cleveland Cavaliers team to wear matching $5000 shorts suits by New York designer Thom Browne, known for his shrunken fit, whose brand has since been acquired with a valuation of half a billion dollars by Italian menswear giant Ermenegildo Zegna.

James is “the perfect combination of superstar talent and superstar confidence,” says the designer, who also outfitted him for the July 31 opening of the I Promise School in his hometown Akron, Ohio. 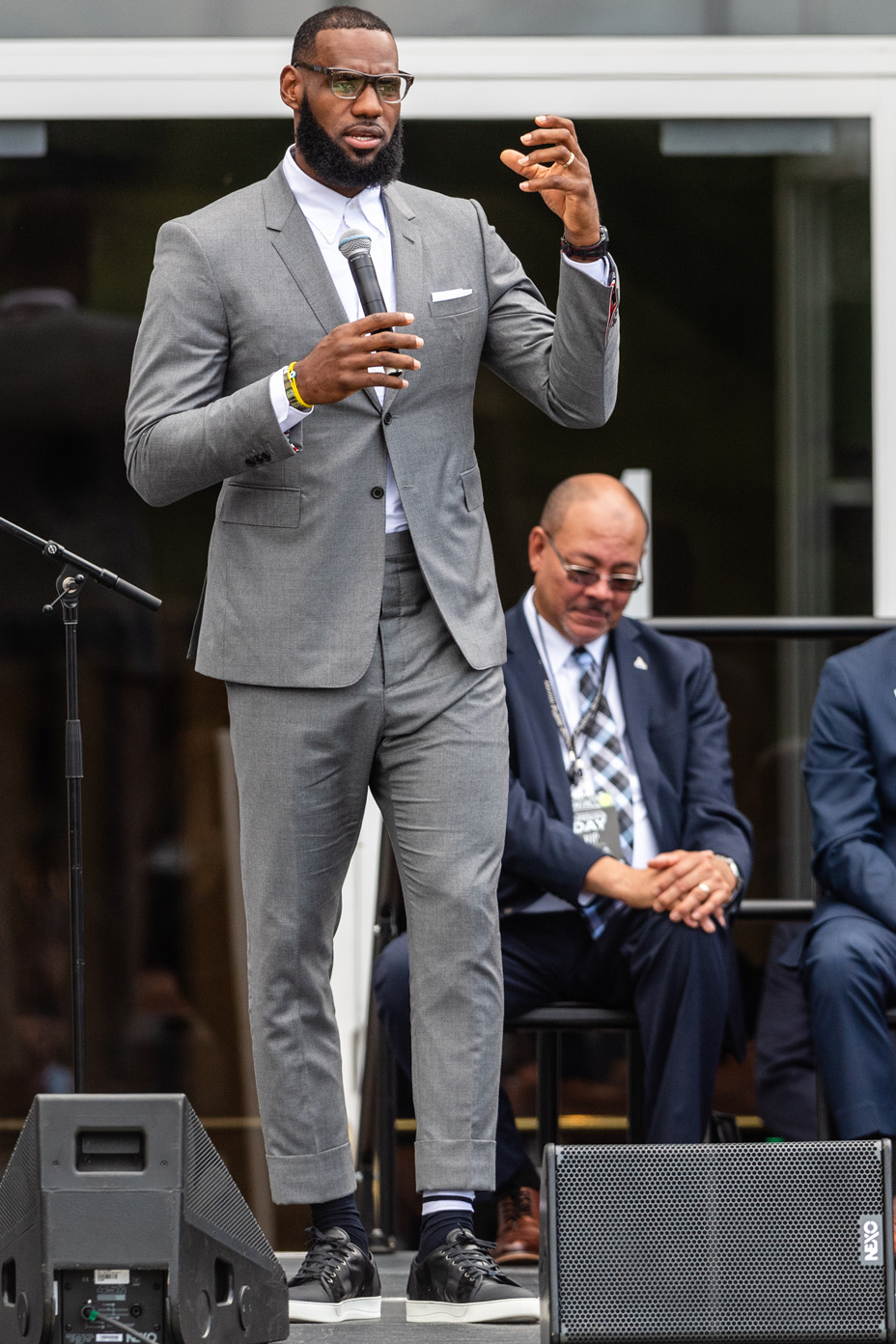 “He’s always a step ahead,” says Jaron Kanfer, CEO of UNKNWN, the Miami clothing boutique James opened in 2011, noting the basketball giant has been mixing designer clothing with his favorite athletic brands “for as long as I can remember.”

There’s plenty of enthusiasm for James’ style swagger—and his ability to sell suits, sneakers and even $500 luxe athletic shorts—in his new home of Los Angeles, where for several years, he has already been supporting a new generation of menswear designers and brands helping to reshape the way men dress, including John Elliott, Fear of God, Amiri, Rhude and Just Don, whose $500 silky “Lakers” throwback athletic shorts he donned when he made his first appearance after signing with the team, while attending a Las Vegas summer league game on July 15. 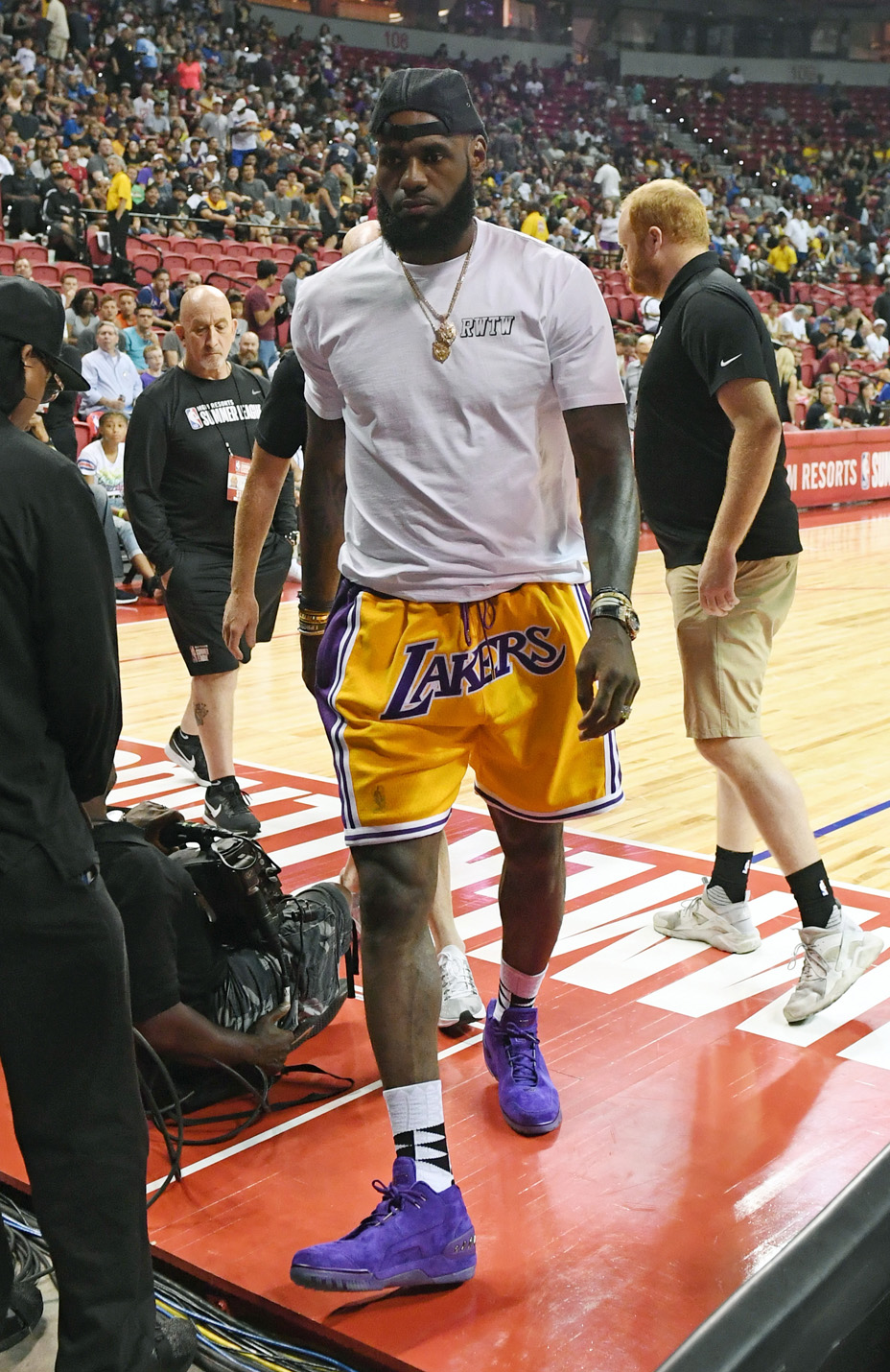 “All my inventory just flew,” says streetwear designer Don C, a.k.a. Don Crawley of Just Don. “My joke was, ‘Are you a Lakers fan or a LeBron fan?’ I’ve been making those Lakers shorts for years, and no one wanted them. Now we’re grinding to restock them.” (The gold version will be out in October, and a less expensive $400 purple version for the holidays.)

Elliott met James in 2014 through his under-the-radar stylist Brennan Robb. He and James bonded over their shared history of collecting sneakers, which segued into a love of fashion. Now, the L.A. designer supplies the player’s modular everyday wear, including the $1610 leather Rider’s jacket he wore for 21 straight games last season.

The two made their relationship formal in August, when they debuted the JE x Nike x LeBron capsule collection, including a unique sneaker with a see-through upper revealing a zig-zag sock that Elliott says was James’ design idea.

MY GUY @JOHNELLIOTTCO WENT BACK IN THE ARCHIVES WITH THE LEBRON 8 AND REIMAGINED A WHOLE NEW SILHOUETTE COMING TO YOU ON SATURDAY. #LBJXJE #SFG LBJ X JE ICON

“He’s gonna clean it up,” Elliott says of James’ potential influence on L.A. style over the next four years he’s signed (for a cool $154 million) with the Lakers. “And he’s going to pull the entire world into his minimalist aesthetic with an eye to quality and tailoring that’s appropriate for the climate…Not to mention that everyone is going to want to be seen court side at his games, and you don’t want to present yourself in a goofy way when the king is on the court.”

Now that LeBron is exploring his Hollywood ambitions, with Showtime docuseries Shut Up and Dribble, and HBO series The Shop among his new projects, he could influence industry men to up their style game, too.

“He will bridge the gap between the NBA runway and the red carpet,” says Josh Peskowitz, the former men’s fashion director at Bloomingdale’s who moved to Los Angeles to open the menswear boutique Magasin in Culver City, noting that it’s athletes more than actors and musicians who are now “the leading edge of more progressive fashion in menswear.” Peskowitz credits James, along with designer Virgil Abloh at Louis Vuitton and Kim Jones at Dior Homme, with leading men away from streetwear toward more tailored clothing.

“This town has been growing in importance for menswear but there hasn’t always been an appetite for sophistication,” says Peskowitz. “With a guy like LeBon around town, stepping out, wearing fly stuff. It’s going to help convince some men who didn’t care before.”

LeBron James' Move to L.A. Should Up His Hollywood Producing Game