Sam Mendes follows his award-winning production of The Ferryman with another surefire hit, an adaptation of Italian Stefano Massini’s epic play about the rise and fall of Lehman Brothers, the investment bank whose ignominious collapse is synonymous with the financial crisis of 2008. Told across 150 years and three generations, it’s a deeply resonant play and a superb, exhilarating production. Like its immigrant protagonists, it will surely be packing its bags for New York.

Of course, the financial crisis has been analyzed, dramatized and bemoaned aplenty — in books; cinema (Margin Call, The Big Short); television (Too Big to Fail); and theater, including David Hare’s The Power of Yes, which premiered on the National’s Lyttleton stage in 2009. But such a hubristic folly, with its global ramifications, offers an endless well of possibilities. And the Lyttleton, again, plays host to another.

Massini’s play premiered in Paris in 2013, before making a splash two years later in Milan, where Mendes came upon it. In adapting it to English, the National’s deputy artistic director Ben Power has reduced the piece from five hours to just over three. In this form, it’s not a trilogy in the usual sense, merely a long production of three acts. Yet those acts span so much — from 1844 to 2008, across immigration and slavery, civil war, world war, the Great Depression, and the development of American capitalism from a force that helped forge the country to an unruly animal that almost destroyed it.

With a narrative form that has something of the beauty and rippling reach of epic poetry, Massini uses his family saga to craft a parable of what, arguably, has been the final nail in the coffin of the American dream. 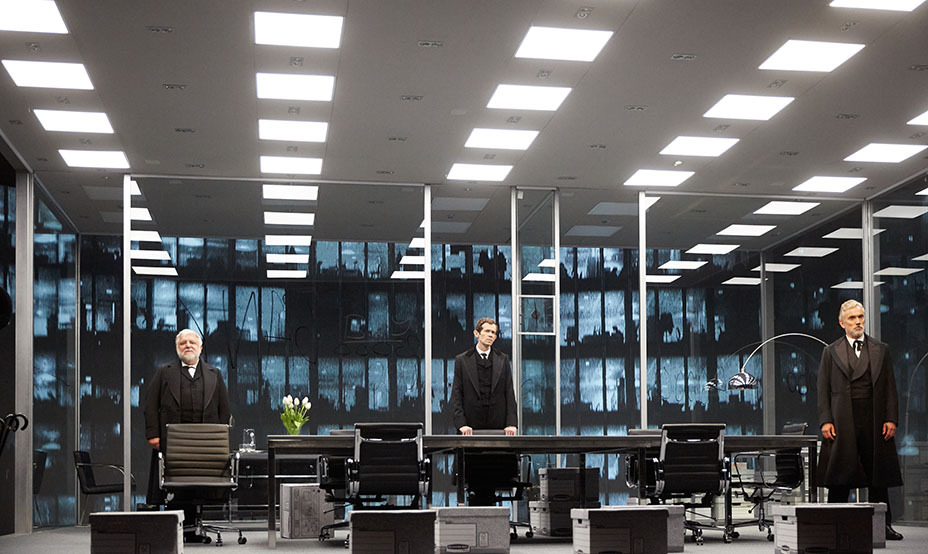 Everything about the production serves to connect past to present, in particular the decision to have three actors — regular Mendes collaborator Simon Russell Beale, Ben Miles and Adam Godley — play all of the characters: the original Lehman brothers, their children, grandchildren, wives, everyone from babe to ancient, while never changing out of their 19th century frock coats. Other than providing the opportunity for some boisterous and bravura acting, this creates the notion of the forebears haunting the villains that lead their company to ruin.

While the costumes remain in the past, the set exists in the present (though equally adaptable in the imagination). Designer Es Devlin’s revolving, open glass box contains the sleek, minimalist decor of a contemporary office space, albeit one being stripped of its assets; aside from a conference table, chairs, a leather sofa, the most notable objects — and frequently used props — are packing boxes, of the kind that became the symbol of the Lehman collapse, carried by desolate employees as they filed out of the building in September 2008.

In contrast, the black-and-white projection to the rear is in constant flux, one moment depicting the Statue of Liberty as the Lehmans arrive in New York from Germany, at another a Southern city ablaze, another the ever-evolving Manhattan skyline. It only breaks from monochrome when charting the crimson nightmares of its errant bankers.

The play opens with the three brothers, sons of a Jewish cattle merchant from Bavaria, arriving one at a time in America: first Henry (Beale), then Emanuel (Miles) and Mayer (Godley), setting up shop in Montgomery, Alabama. They have dreamed of America, “the magical music box,” and work hard — first to survive, selling fabrics and suits, then to prosper as they turn to raw cotton. Though very different personalities (“the head, the arm and the potato”), they support each other through the growth of the business, marriage and death. 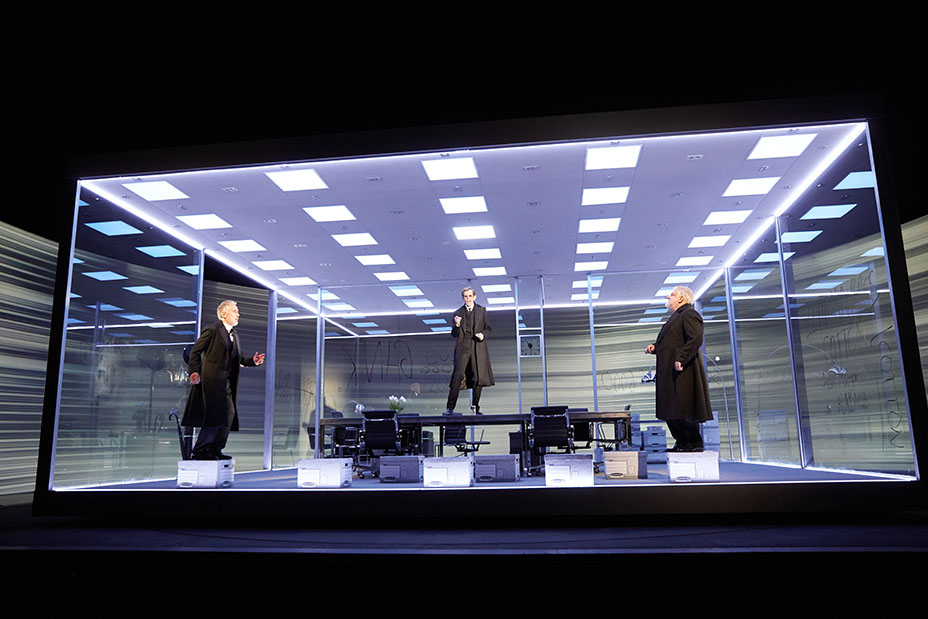 The opening section is full of wit and charm. But although the American dream is firing on all cylinders — hard work, self-actualization, success — the thin line between opportunism and exploitation is already seeded, whether the brothers are getting into bed with the slave-owning plantation owners or prospering from the need to rebuild the South after the Civil War. The contradictions in their rise can be seen, literally, in the writing on the wall: As the brothers scrawl their ever-changing mode of business on the transparent panels, “bank” sits alongside the tally of Civil War dead.

In the subsequent acts, the Lehmans move through the generations and transition from shopkeepers to brokers to bankers to traders — “merchants of money” as one puts it. The charm falls away and the cynicism becomes more deep-rooted. Entrepreneurship loses its romance. The Lehmans finally fall out, over the dispute between risk and responsibility. They progressively lose sight of Judaism, Germany, and their love of America and each other.

The dominance of third-person narrative over dialogue underlines the sense of almost mythic storytelling. At its heart, the performers feed off each other’s energy brilliantly, moving nimbly from one character to another in the space of a gesture, Beale variously gleeful and avuncular; Godley sweet and sinister; Miles invariably playing sturdier, more forceful personalities.

Around them, Mendes brings all of his virtuosity to bear. A number of extraordinary, roller-coaster sequences include Black Thursday, when various brokers commit suicide while a Lehman enjoys a day at the races; dream sequences, including a riff on the Tower of Babel that feels vertiginous even from the orchestra seats; and the glorious sight of three Lehmans dancing the Twist, as ticker tape whirls dizzyingly behind them. Music director Candida Caldicot does a terrific job accompanying the action — at turns mournful, dainty or racy — on a piano to the side of the stage.

The only fault line in Power’s beautifully written adaptation, and in the performances, is in the depiction of women, where the production plays for easy laughs at the expense of caricature. That aside, this is a profoundly impactful tragedy of people who didn’t know when to stop. “They were all invincible,” it concludes, “until they weren’t.”