“I always knew I was born to dominate your sex and avenge my own,” the deliciously amoral Marquise de Merteuil tells her male interlocutor in Les Liaisons Dangereuses. As personified in a blazing performance by Janet McTeer — her voice like velvet and her physical bearing a cloak of studied artifice encasing a flesh and blood woman of ferocious cunning — there’s never cause to doubt her claim. Her accomplice-turned-opponent in their games of cruel conquest is a different matter. But even if Liev Schreiber is ill-suited for the part of the “conspicuously charming” Vicomte de Valmont, Josie Rourke’s evocative staging provides a compelling portrait of a dissolute aristocracy on the brink of devouring itself.

Any production of Christopher Hampton’s 1985 play, adapted with epigrammatic wit and elegant symmetry from the scandalous 1782 epistolary novel by Pierre Choderlos de Laclos, has to contend with the long shadow of its celebrated predecessors. Or more specifically, with memories of the actors paired in its central roles. It’s not the swordfight in which the broken Valmont goes up against one of the many dupes he has humiliated that matters so much as his fatal duel with the Marquise, in which the mutual longing and jealousy of these one-time lovers become the ultimate weapons.

Watching Lindsay Duncan and Alan Rickman draw blood in those roles in the original Royal Shakespeare Company staging, which traveled from London to Broadway, remains an unforgettable thrill three decades later. No less indelible is the clash between Glenn Close and John Malkovich in Stephen Frears‘ excellent 1988 screen version. In both cases, the material served as a sizzling joust between ideal partners, playing at the very top of their game.

Here that distinction belongs only to McTeer, while as the notorious Parisian rake Valmont, Schreiber (replacing Dominic West, who played the role in London, where this production originated) seems oddly constricted in his knee breeches, waistcoat and ponytailed wig. Schreiber is a fabulous stage actor who has proven his gifts in everything from Shakespeare to David Mamet to Arthur Miller, so he’s never uninteresting to watch. But his masculine intensity reads all wrong as Valmont, bringing brusque arrogance in place of preening vanity and brawny swagger in place of wily seductiveness. That touch of the effete associated with even the most libidinous male European aristocrats of the period is missing.

Schreiber becomes more alive and authoritative with lesser adversaries than McTeer’s Marquise. When she asks him as a favor to stain the spotless reputation of virginal Cecile Volanges (Elena Kampouris), the convent-educated intended bride of one of Merteuil’s former lovers, Valmont at first declines on the grounds that such an easy task is beneath him. He’s more focused on the greater test of seducing Madame de Tourvel (Birgitte Hjort Sorensen), a married woman famous for her virtue. Intrigued by that scheme, the Marquise offers herself as the prize, insisting that he obtain written proof of Tourvel’s love. But that plan goes awry when Valmont develops genuine feelings for his prey. Detecting this even before he acknowledges it to himself, Merteuil keeps changing the rules at every juncture. Her favorite word, she admits, is “cruelty,” and the wounds she inflicts spare no one, not even herself.

All this would be just so much juicy bodice-ripping melodrama without Hampton’s glittering dialogue and without Rourke’s sound psychological investigation of the characters’ motives. This applies most of all to the Marquise, whose deceitfulness is offset by her explanation that she seizes on the only kind of power available to her as a woman. When Valmont asks how she managed to invent herself, she replies that she had no choice, going on to point out that while a man can ruin a woman with a few well-chosen words, the reverse just enhances a man’s prestige. Craning her swan-like neck and folding her statuesque physique into poses of decorative demureness, McTeer fully communicates the idea of a woman who hides in plain sight, missing nothing and constantly improvising what she calls “ways of escape.” 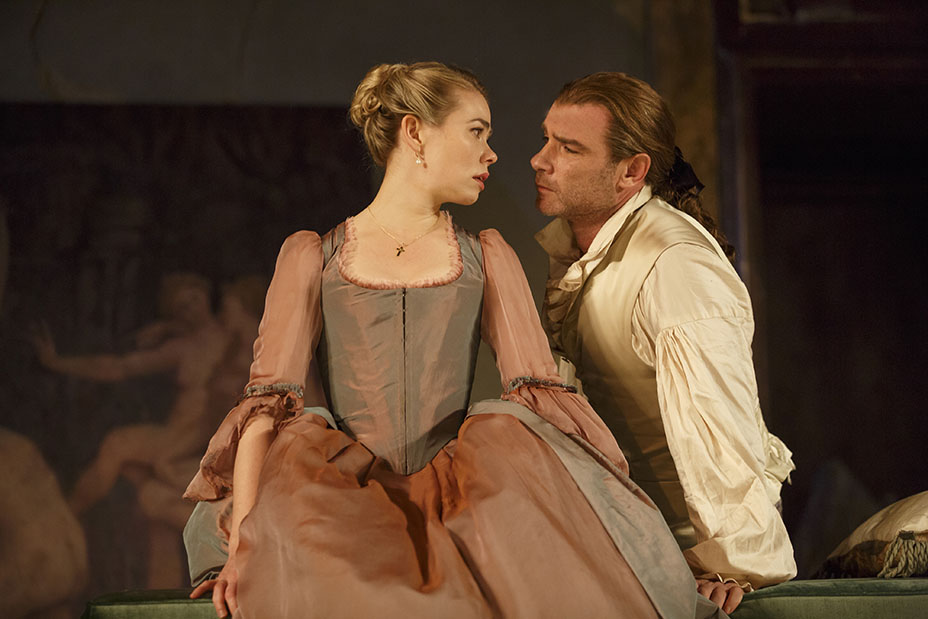 She also gets to step into the domain of men by displaying an omnivorous sexual appetite, whether dallying with Le Chevalier Danceny, played with amusingly clueless formality by Raffi Barsoumian, or practically mounting the freshly deflowered Cecile in her excitement, as big-sisterly comfort turns to worldly instruction.

Hampton deftly arranges the other female characters in counterpoint to Merteuil. Cecile is a pretty dimwit for whom the rude discovery of sex turns out to be a liberating revelation, and Kampouris is a giddy delight in the role. Danish actress Sorensen at first appears too strong, too severely self-possessed as pious Madame de Tourvel, lacking the fragility that seems essential to the role. But as Valmont’s patient strategy pays off, her surrender to him is tremendously affecting, perhaps more so because Sorensen initially seems so invulnerable. When he complies with Merteuil’s oblique demand and breaks abruptly with Tourvel, her anguish is devastating. The same goes for the double-edged sword of Valmont’s brutality in a scene beautifully played by both actors.

“When one woman strikes at the heart of another, she seldom misses; and the wound is invariably fatal,” says the Marquise, upon learning of her victory. I’ve seen this play multiple times, including the versions mentioned above, the patchy 2008 Broadway revival with Laura Linney and Ben Daniels, and various other film adaptations. But I don’t ever recall the scalding pain that Merteuil also inflicts on herself being quite so acute as in McTeer’s performance. The cracks in her serene veneer run deep as she realizes she has failed in the ultimate test of ever inspiring real love.

While Rourke plays up the salacious boudoir comedy to an extent that cuts into the play’s escalating pathos, the concluding scenes do build power as Merteuil and Valmont trap each other and themselves into inescapable corners. For Valmont, whose calculated lies to Madame de Tourvel about how her love has transformed him prove far more prophetic than he ever could have imagined, there’s no way back from the tragic outcome he himself has ordained. And even if Schreiber takes his time to reveal that the predator has become the caged animal, the ultimate effect packs a wallop.

Among the solid supporting cast, the invaluable Mary Beth Peil is sublime as Valmont’s aunt, Madame de Rosemonde, a dithering old dear who shows unexpected worldliness in matters of love and a clear-eyed understanding of her nephew’s true character. “Men enjoy the happiness they feel,” she observes ruefully. “We can only enjoy the happiness we give.” Her final words to the Marquise in the play are accompanied by a cutting glance that suggests this seemingly benign dowager has claws, too.

Visually, Rourke’s production is both pared-down and sumptuous, with entrancing choreographed scene changes accompanied by Michael Bruce’s mock-period score, vocalized by the cast as they glide around the stage. Designer Tom Scutt’s costumes are a ravishing knockout, and his set, a decaying 18th century chateau draped in gauzy drop cloths, gradually stripped of its paintings and furnishings, serves as an effective metaphor for an oblivious ancien regime, hurtling toward a Revolution that will curtail their insular privilege. Mark Henderson’s lighting also is richly atmospheric, dominated by chandeliers and candelabras with actual candles, their flames symbolically snuffed out before the final resolution.