There’s no question that Leslie Odom Jr. is wildly talented. He’s a Tony Award-winner for his role as Aaron Burr in the Broadway show Hamilton, a recording artist currently on tour promoting his second album, Simply Christmas, and today he opens in Kenneth Branagh’s Murder On The Orient Express. He’s also a (somewhat reluctant) style guy, even if his go-to uniform is jeans and a T-shirt.

In-between promoting the starry whodunit (appearing in just his second film, he plays Dr. Arbuthnot, one of the many suspects on the train, a role played in the original 1974 film by Sean Connery), and prepping for a gig at the Macy’s Thanksgiving Day Parade, Pret-a-Reporter caught up with the Renaissance man (who also happens to be a spokesperson for Fossil Watches) about costume and character, favorite holiday traditions and his future fashion ambitions involving 6-month old daughter, Lucille Ruby, and wife, Nicolette Robinson.

Leslie Odom Jr. Returns to Broadway in Revival of 'Purlie Victorious: A Non-Confederate Romp Through the Cotton Patch'

Rian Johnson, 'Glass Onion' Cast on Making the Whodunit Sequel and Which Costumes Will Rival Chris Evans' 'Knives Out' Sweater

The cast for Orient Express is crazy! Judi Dench, Michelle Pfeiffer, Kenneth Branagh, Johnny Depp and on and on. Was it fun to work on?

The most fun. I haven’t done a ton of film, so the chance to work on a Hollywood movie that was shot the way movies used to be shot was a glamorous, ideal film experience — and with Ken Branagh at the helm, who was such a gentleman and so forthcoming and open and collaborative. You had big movie stars and no assholes. And there wasn’t a person in that room who I hadn’t seen and loved in something. 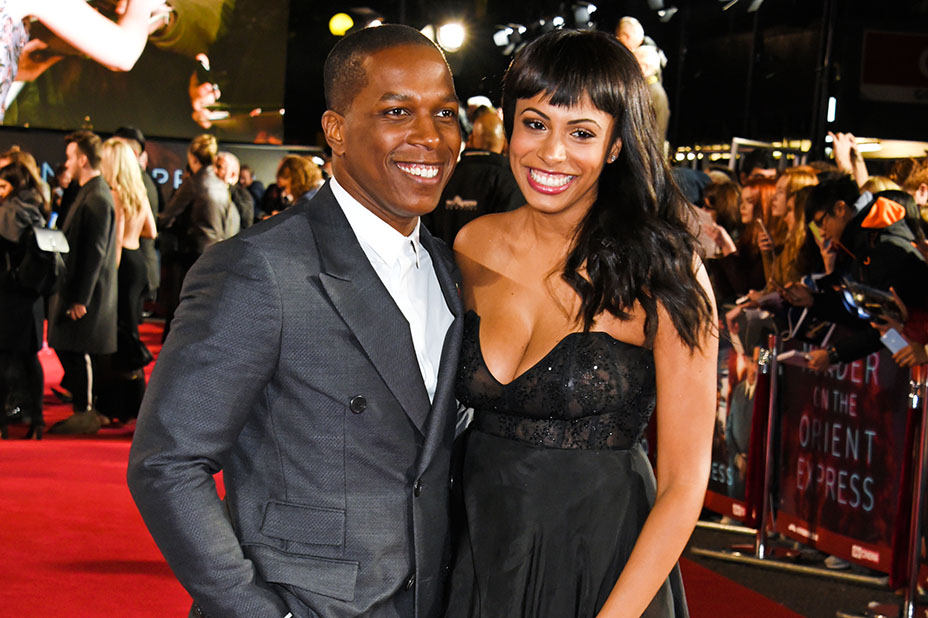 Yeah, for the deluxe version of the Christmas album. We’re doing the Thanksgiving Day Parade and the Christmas Tree Lighting and the Harry Connick Jr. show.

Really letting life slow down to a crawl, letting the emails and social media fall away. I love to have a book to read over the holidays, and that feeling where there is nowhere else to be but home and no one else to be with but your family. I try to stretch it as long as I can.

I’m one of those people, which is a gift. I started to understand with the Hamilton days, Broadway shows for tourists in New York, that’s part of the reason why people travel there. In a way, we were part of that whole holiday tradition. When you’re a performer and lucky enough to be in something that people like, it’s a nice living, a lot of fun, but there’s an element of service to it. You are bringing people joy and happiness at the expense sometimes of time with your own family.

What do you miss most about Hamilton?

The company, knowing that I got to see them every day and share space with them and remake this thing. The thing about a film is, when we show up at a premiere and to promote it, we’re showing up to party. The hard work is behind us. A Broadway show, we show up to essentially film the show every night. Every single night we have to make the thing fresh as if it was the first time for a new audience. That making the donuts bonded us together forever. 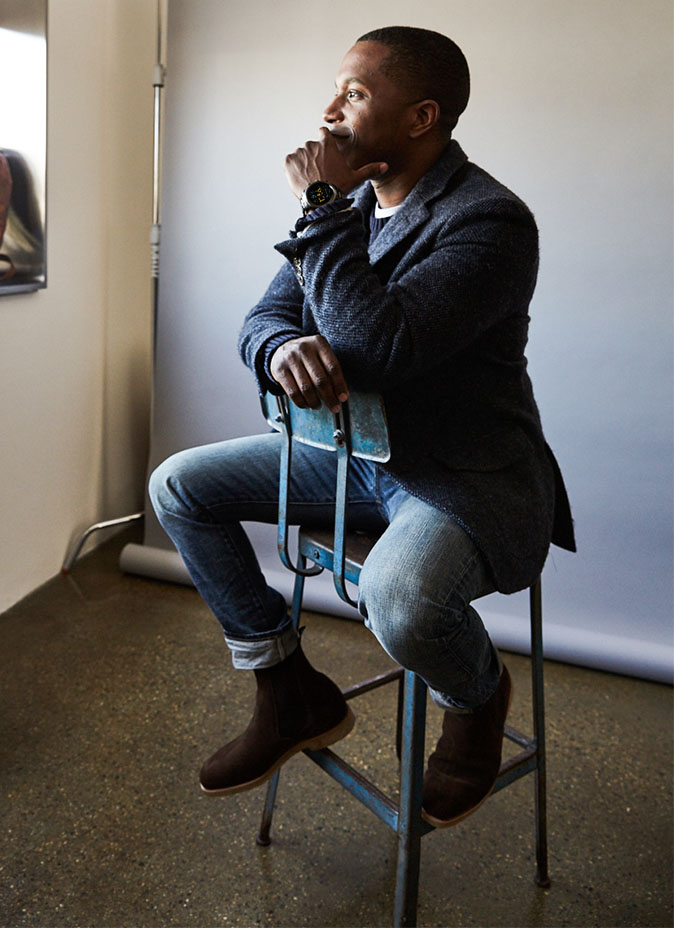 Part of doing the Hollywood thing is doing the fashion thing. You are promoting Fossil. Is this a brand you knew of before you shot the fall campaign?

It was. As you start to become style conscious as you get older, you’re going to meet many guys who reach for Fossil for their first major watch purchase when they are no longer getting a watch out of a bubblegum machine. That was certainly the case for me. It was a brand partnership that made sense. I love the photo shoot and video we made. It was a natural fit, and I get lots of compliments on my watch. They have a digital smartwatch and one that has a traditional face and then has a couple of smart elements.

Do you have one function you use a lot?

For me, the calendar alarm helps me stay on track all day long. And any time I can put my phone down and have something that alerts me to pick it up it’s a good thing. Functions like that help me free up my hands and some space in my head.

All Saints makes a black cotton T-shirt that I bought in a size large, because I gained some sympathy weight with my wife when she was pregnant, and [the shirt] doesn’t make me feel like one of the Thanksgiving Day floats. I enjoyed it so much I bought six more. Now that I’ve lost some of the weight, I could probably go down to a medium, but I’m still liking the large and it’s my staple. I can throw a sports jacket over top with a pair of jeans by Uniqlo, which I love. I love their black cashmere sweaters, too. 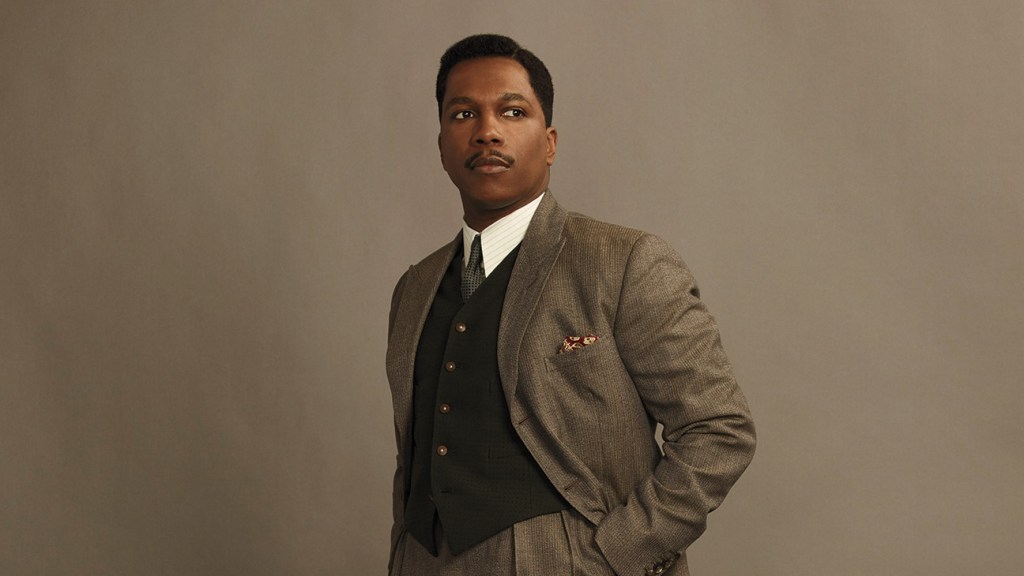 In Orient Express, was there anything about your costume that helped you get into character?

Alexandra Byrne, the costume designer, showed me costume ideas, renderings and mood boards, and it was so helpful in developing the biography of my character, and how a black man would have had this Scottish last name, walked through life at that time in the early 20th century, and the circumstances that would have led him to the Orient Express. She helped me out a lot. All the details of the costumes and production design were like time travel.

Was there a Scottish detail in your costume?

I had some luggage and props that had to do with my profession as a doctor but no kilts or anything like that.

You’re performing at Disney Hall in L.A. on Dec. 8 as part of the Broadway Concerts Series. I’m guessing you don’t get nervous now that you’ve conquered Broadway?

I still get nervous. This was the year of big gigs, we did two nights at the Kennedy Center, we’re doing Disney Concert Hall. When you have a moment of a dream realized, first of all, it’s all about honoring that moment and really delivering. But after that, you go “OK, what does it take to get to Carnegie Hall? What do we have to do to get to Hollywood Bowl?” We keep growing and reaching and stretching.

Now that you’ve dipped your toe in the fashion world (I also saw you at the Vogue/CFDA Fashion Fund runway show in L.A. earlier this month), do you have an interest in doing more in that arena?

There is a niche in the baby market that my wife and I found in trying to dress Lucy. I don’t want to say too much yet, but I think that’s how a lot of things happen in that you see something missing in the marketplace and think, “Let’s create that thing.” I never thought I would be into fashion, but I do get picky about what fabrics Lucy is in and what patterns she’s wearing. I want to have the best of everything for her and I’d love it to be affordable.