This is one comic book story that feels particularly timely.

As DC Entertainment’s Superman prepares for his big relaunch at the end of the month with the first issue of the weekly series The Man of Steel, this week’s Action Comics Special gives comic fans a chance to see a different side of his arch villain Lex Luthor.

The extra-length issue contains stories by a number of creators, including outgoing Action Comics writer Dan Jurgens, but it’s “Suprema Est Lex” by Mark Russell and Jill Thompson that’s likely to gain the most attention; not only does it offer a glimpse inside Luthor’s head, it also takes place at an event currently in the headlines: the White House Correspondents’ Dinner.

The story looks back at a moment in which Clark Kent delivered remarks at the Correspondents’ Dinner, and poked fun at Luthor. It’s a story that drew inspiration from Seth Meyers’ 2011 roasting of Donald Trump at the dinner, which the comedian himself has speculated caused Trump to run for president.

Heat Vision talked to Russell about the crafting the story and whether Trump really does have parallels to Luthor.

Congratulations on a story that has become amazingly topical, thanks to what happened this past weekend. Did you have any idea this issue would come out days after this year’s White House Correspondents’ Dinner, or was this just an incredibly lucky coincidence?

It’s completely a coincidence. I pitched this months and months ago, and wrote it two and a half months ago; I guess a little research might have shown it was coming out around the same time [as the actual WHCD], but I had no idea when it would come out.

It’s impressively timely, especially in the wake of Michelle Wolf’s speech and the response to it.

Yeah, it really worked out well. (Laughs.) I couldn’t have asked for better timing from the comic. It’s based on past White House Correspondents’ Dinners, which are now even more important — or a bigger bellwether on the health of our democracy — now that Donald Trump is president.

Why did you choose to set the story at the Correspondents’ Dinner? Was there a sense of, “Clark Kent’s career as journalist is particularly important these days” or something else? Despite the setting, Kent is almost incidental to the actual story…

It was really a story about Lex Luthor, and the function that a sort of lese-majeste plays in our democracy. How you need to worry about someone who takes themselves that seriously; it’s kind of the worst attribute someone can have in power, to take themselves so seriously. It leads them to believe they’re infallible, and that’s when they double down on their worst attributes.

The story makes clear the contrast between how Lex Luthor sees himself and how the world sees him. I don’t want to be too obvious, but the Lex Luthor as Donald Trump analogue is very clear here, especially the way the story mirrors Seth Meyers’ 2011 speech at the Correspondents’ Dinner. Do you see Trump as a Luthor-type figure, or is it more about the ego of both, and their shared desire to be close to power?

It’s all about the ego and closeness to power. I don’t see [Trump] as having, even, the foresight to be much of a supervillain. It’s more about the danger that ego poses to power — what a bad combination that is. And it really is, in large part, based on the White House Correspondents’ Dinner that Seth Meyers did, where he was roasting Donald Trump and you see Donald Trump in the background, steaming, getting increasingly angry and more uncomfortable. This comic is, what was going on in that person’s head while they were sitting there. Someone who takes themselves so seriously, what goes through their head when they’re confronted with people laughing at them?

You also play up the contrast with Superman, with a flashback to Kent deciding to speak at the dinner despite his own anxiety and humility about being the center of attention, compared with Luthor’s belief that he should be the center of attention, he should be the one people are not only paying attention to but, as the story shows, not being friendly towards but being someone people fear and expect. This gets back to the ego of Luthor and feeds into his worst impulses, leading him to be more inhuman, for want of a better way to put it.

Yeah, absolutely. I think that, once someone has made themselves the object of their own veneration, they’re kind of lost. They’re not going to accept criticism from people that they think are fallible, or people that they think are less than them, and they’re not going to believe that anything they’ve done or said is wrong. They’re just going to double down on their ideas, no matter tragically misguided they may be.

In Ancient Rome, even the emperors, after a glorious victory, would have someone whisper in their ear, “Remember that thou art mortal.” What we need in 21st century America is someone constantly whispering in the president’s ear, “Remember that thou art stupid.” (Laughs.) If you’ve drunk your own Kool-Aid, then no one is able to reach you. You’re not going to mitigate your own failures by changing course, which is absolutely the most dangerous attribute a president can have.

You bring that up in the story itself, in that the first page and last page echo — Luthor has other people essentially beat people who upset him on his behalf, because he sees himself as being above getting involved with people beyond what they can do for him. Is the inability to change, to even hear criticism, something that you’re warning against, or wanting people to be aware of, especially in the comparison to Trump?

I think that, especially for people born into privilege, there’s a tendency to conflate their wealth with their abilities — to think because I paid people to do this, I did it myself; because I signed the checks, I made it possible. They tend to overestimate their own personal abilities. When they get into a sphere like politics, where their ability to write a personal check doesn’t really matter, their overconfidence in their abilities remains, and that puts the country — or their business, or whatever they’re running — on very thin ice.

Something that occurred to me, in drawing parallels between Lex Luthor and Donald Trump is that Luthor is traditionally portrayed as an evil genius, with the genius part actually being present; it’s not only ego. But Trump has only his own success to back him up, and he falls clearly into the description you gave of someone born into privilege. Is the comparison between Luthor and Trump unfair to Luthor?

That’s a good point! Lex is canonically a genius. But this isn’t a story about whether he’s a genius or not, it’s about the moral failure of your own certain destiny and infallibility. It’s not about your ability to back it up.

Within the story, you touch on that notion of infallibility. Luthor is taken down because of littering, which itself has parallels in the real world; I thought about Al Capone being brought down by his taxes.

Right! Even self-proclaimed geniuses fall prey to their pride. It allows them to be dismissive and not take threats seriously because they think they’re better than everyone. So they make these tiny mistakes that turn out to ruin them. There’s a number of historical examples. You pointed out Al Capone, but history is filled with examples where overconfidence is ultimately what unravels [people]. Julius Caesar, walking into the Senate thinking everyone is going to be onboard with his program because he was unbeatable in the field. He didn’t foresee the obvious reality that, in Rome, surrounded by the senatorial class, someone was going to want to put a knife in his gut.

Looking at your work on The Flintstones and Exit Stage Left: The Snagglepuss Chronicles, I have to ask: Are you surprised that these kinds of pop-culture characters offer this level of ability to comment on society and politics, and do so in a way that can be read both as a straight-through story without allegory, but also with the allegory clear for those looking for it?

Are there other characters or projects that you’d like to approach with that in mind? As terrifying as it can be to live through, this is a very fertile time for commentary because we’re going through such change, and regression, societally. Are there characters where you think, “Oh, I’d like to work with them to make this point”?

I’m doing the Judge Dredd story that’s largely doing exactly what you’re talking about; about retrenchment, about a society trying to put a lid on what it’s ignored for so long that it’s become dangerous. Trying to ignore that you’ve made such horrible foundational errors that they only way to fix it is with violence. That comes out May 30. The one character I’ve always wanted to write, that I’d be fascinated to write, would be Scrooge McDuck; it’s hard to imagine a better analog for critiquing late-stage capitalism. 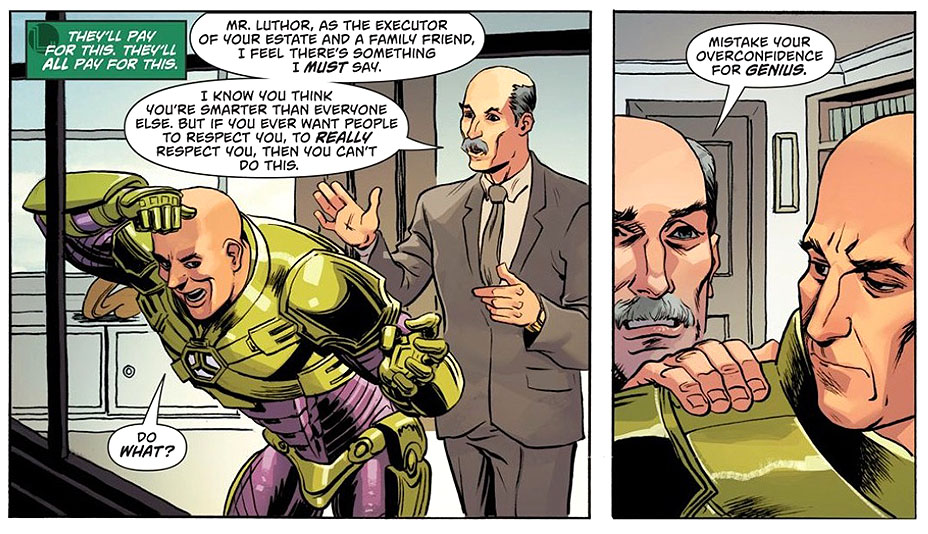