At the first press performance of the crackerjack new Broadway play The Lifespan of a Fact, the laughs seemed especially explosive from copy editors in the audience, along with every writer who has ever dealt with that endangered species. But the spry humor, rippling tension and provocative reflections of this ingenious adaptation of the sui generis book of the same name will by no means speak exclusively to those of us who make our livings as members of the fourth estate.

Lest anyone doubt that this mordant commentary on our times goes far beyond journalism, let me steer your attention to just a handful of 21st century cultural markers — from Stephen Colbert’s coinage of the term “truthiness,” through James Frey peddling his addiction fiction, A Million Little Pieces, as a memoir, to the Trump administration adopting “alternative facts” when convenient and decrying “fake news” when it’s not. In this age of lies and deceptions, it’s all related.

The source material would seem an unlikely prospect for stage treatment. Published in 2012, it includes a lengthy 2003 essay by John D’Agata, commissioned by Harper’s Magazine, centering on the death of a teenager in Las Vegas the previous year and exploring the wider culture of suicide in the Nevada gambling capital. Appearing alongside that piece are the exhaustive margin notes and questions added by Jim Fingal, who was assigned to fact-check D’Agata’s essay after it was pulled from publication by Harper’s and submitted to bi-monthly literary magazine The Believer, where it eventually ran in 2010.

The invigoratingly taut stage version written by Jeremy Kareken, David Murrell and Gordon Farrell — all Broadway newcomers — focuses on just the initial part of that long and tortuous path to publication. It unfolds from Wednesday through Monday morning of a tight print-deadline week and makes Jim an ambitious intern, fresh out of Harvard, at the unnamed commissioning magazine in New York. He’s played by a never-better Daniel Radcliffe in a live-wire performance full of surprises and killer comic timing that makes him the linchpin of the superb three-person cast. 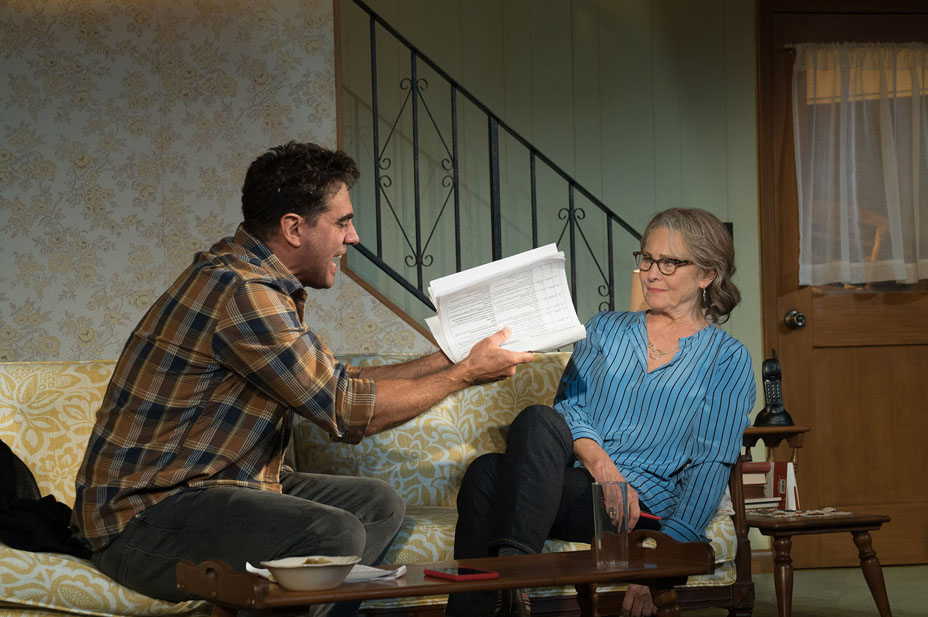 The opening use of a voiceover passage from D’Agata’s piece and related emails splashed across the translucent panels of Mimi Lien’s set plants some initial worry that the playwrights have struggled to find a way to dramatize the text-based material. But those concerns vanish as soon as people get in the same room, and from that point on, director Leigh Silverman keeps her foot on the accelerator. She works with crisp efficiency in a seamless unit with her ace design team, building a production that moves with the ticking-clock urgency the situation demands, yet finds appropriate moments to breathe and let us ruminate on the personal, professional and moral issues at stake.

Jim is summoned into the office of editor-in-chief Emily Penrose (Cherry Jones) after John’s shattering essay — woe to anyone who calls it an “article,” we learn — has been moved up on the budget to replace the lead feature. It’s been through the copy-editing process but now needs to be fact-checked before going to the printers first thing Monday. Given that John has been known to take liberties, Emily requires “a good faith effort” to confirm the details.

Already stretched thin since the magazine’s streamlined restructure — which effectively eliminated the fact-checking department — Emily gets a first taste of Jim’s flood of questions and brushes him off to deal directly with the prickly John, played by Bobby Cannavale as a hilarious bullying prima donna. To say that John is not receptive to being interrogated by the fast-talking young nerd is a massive understatement. He is indignant about any tampering with his copy, insisting that 100 percent accuracy in names, dates and specific incidents is less important than rhythm, music and beauty in the language.

“This piece rests on the weight of a lot of details,” argues Jim. “It’s problematic for you to wash your hands of their accuracy.”

“I’m not washing my hands of anything,” replies the increasingly defensive John. “I’m saying there’s a world of facts to choose from. The wrong facts get in the way of the story.”

Forgivably stretching plausibility for the purpose of upping the stakes of comedy and conflict, the playwrights have first Jim and then Emily descend on John’s home in the Nevada desert — which emerges out of the sleek editorial office walls in designer Lien’s stunning transformation. With nerves fraying over a series of standoffs and negotiations, a long, dark night of the red pencil unfolds, and Emily serves as mediator as they chip away at Jim’s 130-page spreadsheet of documentation, comments, questions and graphs pertaining to the 15-page essay.

If this makes the play sound in any way didactic, more dialectic than drama, be assured it’s not. The exchanges have the vigorous back-and-forth zing of a sweaty squash match, not to mention a stinging relevance to so much of what’s been happening for years now in American social, cultural and political discourse. It’s hard to imagine this pithy play ever being more timely or more ideally cast, and the dynamic of the three actors is thrilling to watch.

Jones’ Emily is the epitome of no-fuss authority, but there’s also warmth and an affecting suggestion of weariness behind her multitasking fierceness. She’s a distinguished editorial career veteran who has seen the writing on the wall for magazine journalism and obviously cares deeply about her legacy, seizing on John’s essay as a chance to publish something meaningful about despair and the human condition. 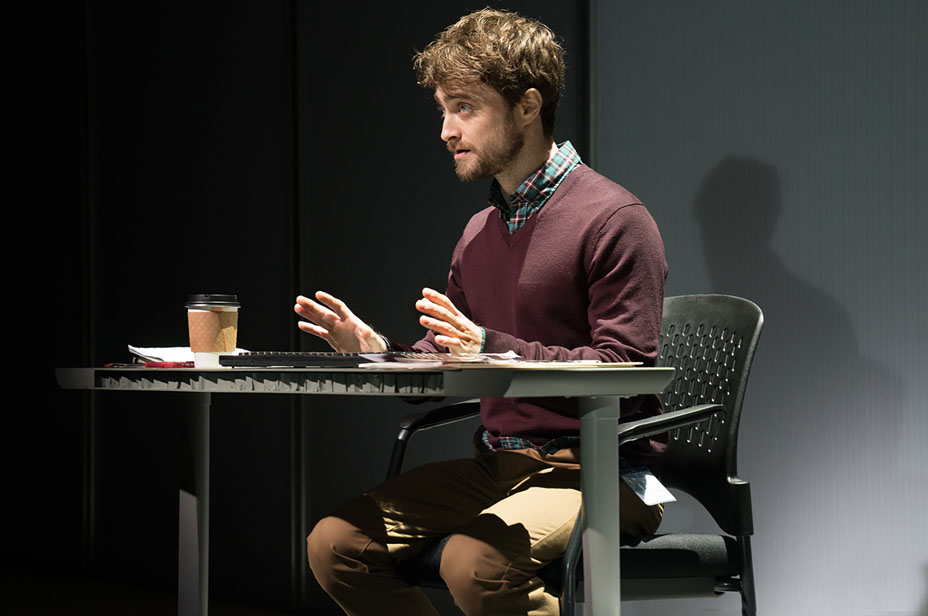 Cannavale uses his rangy physicality to great effect, pumping himself up into menacing mode or skulking away in defeat during interludes when John is outmaneuvered. The actor makes no concessions to soften the character’s egomania — he’s a gifted prose stylist and he knows it — but Cannavale’s natural humor makes John likeable even when he’s mounting a pompous defense of authors’ rights that places him in august company stretching from Herodotus and Cicero through to Didion and Sontag.

As riveting as Jones and Cannavale are, however, the real revelation here is Radcliffe, very convincingly playing American. He’s been terrific in a number of Broadway productions, most recently Martin McDonagh’s The Cripple of Inishmaan in 2014. But there’s such quicksilver vitality to his performance here that you can’t take your eyes off him, and it’s the ways in which the other two characters bounce off Jim’s infuriating, unyielding punctiliousness that make the play so entertaining.

At first, Jim seems almost meek and eager to please, a kid who’s no match for a swaggering modern-day Norman Mailer like John or a caustic general like Emily. But his spiky side is no less formidable than anyone else’s on the stage. Jim’s stillness and intensity mask a fiery passion, not just to seize this opportunity as a chance to make an early-career mark, but also to shoot down the naivety of Emily and John as they lean toward the expedient solution of printing and running corrections later.

“I’m not interested in accuracy; I’m interested in truth,” says John in a grandiose declaration that doesn’t negate his genuine emotional investment in capturing the spirit of the dead boy. But for idealistic Jim, the irrefutable reality is that facts are non-negotiable, at least not without undermining society’s trust in itself, as he puts it. When the adversarial trio sit down calmly and read a key passage of John’s piece in the poignant closing moments of the play, all the arguments about journalistic integrity and what’s permissible in literary nonfiction are suddenly eclipsed by the more powerful force of human tragedy — a truth that demands to be respected.