Lilly Wachowski has “one foot out the door.” That’s how the creator of the iconic Matrix franchise (with her sibling, Lana) describes navigating Hollywood 25 years after her first film premiered. On the one hand, Wachowski wants to use her platform to get more LGBTQ stories told, such as the comedy Work in Progress that she executive produces and writes for Showtime. On the other, “I have a resentment toward the industry because I feel like I wasted personal time,” says the writer-director of her nearly three-decades-long career as she shelters in place in Chicago. “[Filmmaking] is really a time machine that you get in and you get jostled around and then you come out of it a year and a half later, per film in some cases.”

When Wachowski, 52, surfaced after her demanding, ever-going production schedule that began in 1999 with The Matrix and continued through its sequels, the 2012 feature Cloud Atlas and the 2015 Netflix series Sense8, she was already losing interest in filmmaking’s creative process. “I got in when film was at its peak, before boards and marketers found a way to wrangle movies,” she says. “Eventually, all those people and institutions ended up in the room with you and specifically behind the typewriter and behind the lens and behind the Avid. It created a bit of tension for me personally. I got to this breaking point and I had to walk away,” exiting Sense8 and the industry altogether almost six years ago. Wachowski needed to do “some personal world building,” which included prioritizing her wellbeing and happiness, experimenting with stand-up, studying at the School of the Art Institute of Chicago and beginning the process of her gender transition.

When the director was forced to pen an open letter about that journey in the Windy City Times after a Daily Mail reporter showed up on her doorstep, she realized that her films held greater meaning as trans folks began sharing their impact. “Now that I’m out and a living example of someone who can grow old being a trans woman, [trans people] can see those films through the lens of my transness and their transness,” she says. “They’re able to go, ‘Oh my God, these films were such an important part of my coming out and my own journey.’ I’m extraordinarily grateful that I could offer that to people.”

She reveals that so much of The Matrix, for example, was “born out of a lot of anger and a lot of rage, and it’s rage at capitalism and corporatized structure and forms of oppression.” Wachowski explains that the “bubbling, seething rage within me was about my own oppression, that I [was forcing] myself to remain in the closet.” The result is a lot of subtext baked into the franchise about the spectrum of gender and the trans experience.

Somehow, however, the film’s red-pill motif has been co-opted by radical conservatives, “men’s rights” activists and conspiracy theorists who interpret it as a gateway to beliefs that are often white supremacist in nature. Recently, Tesla founder Elon Musk, who called California’s coronavirus shutdown “fascist,” tweeted, “Take the red pill.” Ivanka Trump responded with “Taken!” followed by a “Fuck both of you” from Wachowski herself.

Such misconceptions are all the justification the filmmaker needs for creating work that is expressly queer and trans. Work in Progress stars Abby McEnany as a “fat, queer dyke” who falls in love with a trans man, played by The Politician‘s Theo Germaine. The show, which has been picked up for a second season, is her first venture back into Hollywood. “I’ve always made stuff that I wanted to see, but now here I am, an out proud trans woman, and there’s no room for misinterpretation about what our show is about,” she says. “That part is extremely satisfying to me. I get to just play in queer-land.”

And though aspects of the film and television industry still make her hesitant to make a full return, the role Wachowski can play in improving queer and trans representation is front of mind.

“I’m getting more queer and trans folks on the screen to show what we’re capable of and what amazing artists we are,” she says. “That’s a hard thing to give up.” 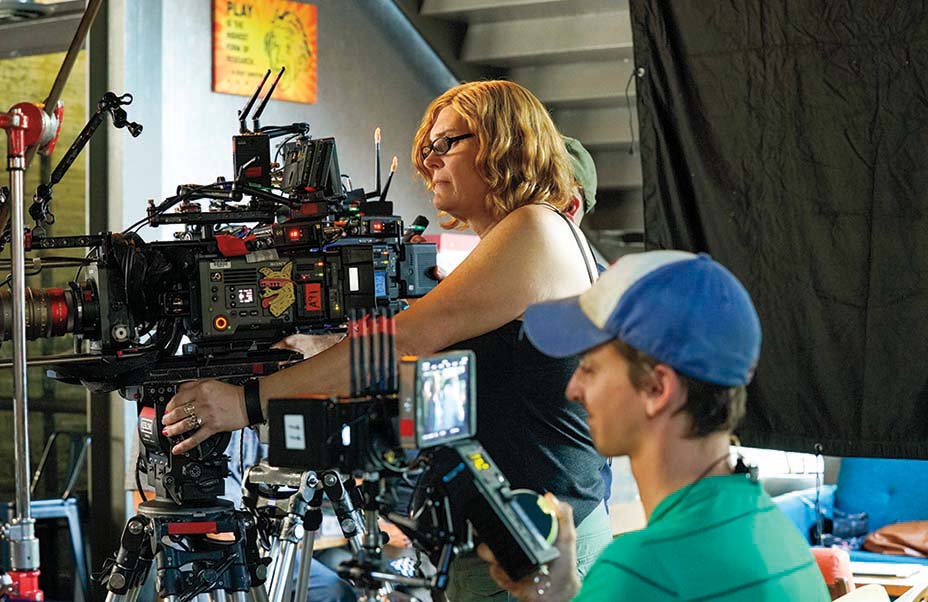 The (Too Slow!) Road to Progress: A Timeline of LGBTQ Milestones in Hollywood and Beyond

'Pose' Director-Producer Janet Mock in Conversation With Ally Ted Sarandos: "No Real World Without LGBTQ People in It"