On March 3, 2016, Lilly Wachowski published a coming-out essay in her hometown LGBTQ newspaper, the Windy City Times. The piece came after reporters from various outlets had been circling the filmmaker and her reps in the hopes of landing an exclusive about Wachowski’s transition. That included a reporter from The Daily Mail who had shown up unannounced on her door step the night before.

“My sister Lana and I have largely avoided the press,” Wachowski explained in the essay, referencing her transgender sibling and longtime creative collaborator on such films as the Matrix trilogy, Cloud Atlas and Jupiter Ascending and the series Sense8. “I find talking about my art frustratingly tedious and talking about myself a wholly mortifying experience. I knew at some point I would have to come out publicly. You know, when you’re living as a transgender person it’s…kind of difficult to hide. I just wanted — needed some time to get my head right, to feel comfortable.”

A month later, on April 2, 2016, Wachowski walked the blue carpet at the 27th annual GLAAD Media Awards in Los Angeles, and though it was a quick run-up to the occasion — she told The Hollywood Reporter at the time it felt like a Band-Aid had been ripped off — she made the decision to be there in part to support Sense8’s nomination (and eventual win) but also out of service. “I wanted to do it in such a way that I could help as many people as I could.”

That spirit of visibility and selfless generosity for the sake of a greater good brought Wachowski back into the spotlight Thursday evening, albeit one with a softer glow, on the second floor of the TV Academy’s Saban Media Center in North Hollywood. The event: a panel discussion titled “The Power of TV: Trans Visibility in Storytelling” presented by the TV Academy Foundation and Walt Disney Television. (In 2017, the TV Academy Foundation introduced a new series of public programs titled “The Power of TV” to examine TV’s ability to shape culture and create positive social change.)

Seated next to Wachowski were Pose creator Steven Canals, Alexandra Billings (Transparent), Alex Blue Davis (Grey’s Anatomy), Brian Michael Smith (Queen Sugar) and GLAAD’s director of transgender media and representation Nick Adams. More than 100 guests looked on inside the Saban’s Governors Room as the panel got underway at 7:30 p.m. with Adams handling moderator duties. When it was all said and done, more than an hour had gone by and conversation points had included everything from history-making projects from the past like Boys Don’t Cry to the present with Pose and Transparent. Also discussed were the damage created by trans tropes, the high rate of suicide in the trans community and the dearth of trans roles and actors on TV today. 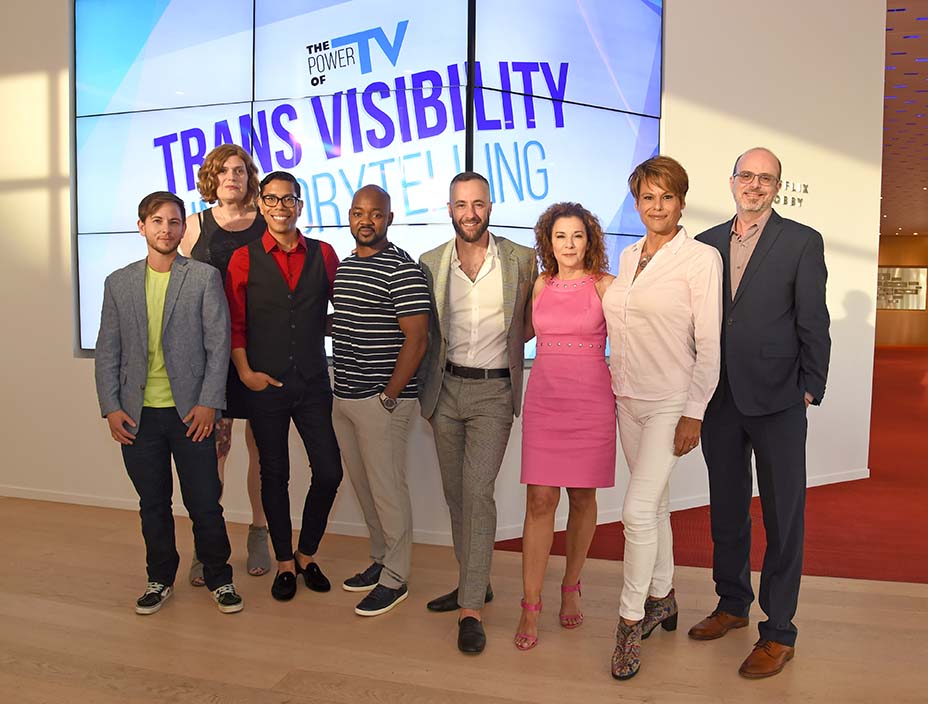 Adams, who is trans, kicked off the discussion with a simple question: When did you first see yourself reflected on a screen, big or small?

For Smith, it was the Kimberly Pierce-directed Boys Don’t Cry, a brutal true-life tale of a trans man — played to Oscar-winning results by Hilary Swank — murdered in a small town in Nebraska. “That resonated so much with me,” he noted. “It was also very scary because Brandon Teena’s story is very tragic and I felt [death] was very possible for me if I were to pursue a transition.”

Wachowski answered next, earning laughs when she said, “I guess I’ll give it a whirl.”

“For me, it’s a murky question. You know as I was growing up all of the trans characters were played by cisgender actors; there was a facade and the characters lacked real depth,” she explained. “For me, my transness as mode of being was more…. I could tangentially relate to punk rock and heavy metal music and later rap music. Because the characters I would see — John Lithgow playing trans in The World According to Garp — while it was a lovely portrayal, there was an element missing.”

Wachowski found it in what may seem a surprising place — pornography. “The first images I saw that struck a chord with me were trans images in pornography. It was something that unlocked in my brain and I saw these wonderful fearless performers becoming desirable. In my head I could take the leap where I felt that if I could be desirable maybe I could be loved. Will somebody love me? That’s my answer.”

For Billings, she said her moment came when she was a teen, seated on the edge of a bed while clutching a handful of her mother’s pills preparing to commit suicide. Phil Donahue’s daytime TV show was on in front of her. “I saw three women, big hair and lashes and lips and they were so funny and witty [and I thought] these are the greatest prostitutes I have ever seen in my whole life,” she recalled, before mentioning that the revelation came when they were asked what bathroom they used. “They started to speak and as this conversation went on, I found out they were three trans women. At that moment, I sat at the edge of the bed, I said out loud to the universe, ‘Oh, there I am,’ and I put the pills down.”

After Davis said he also was suicidal growing up, Adams took the opportunity to explain why visibility is so crucial to the community. “In my mind, representation is a life and death issue for many of us,” he said. “Humans are creatures who want to see ourselves reflected back on screens. When you look to the media to see yourself and you see nothing, you feel as if there’s no place for you.”

And, for many years, Adams said the representations have been problematic with trans talent too often relegated to roles as sex workers (with no empathy shown toward those characters), villains, psycho serial killers or victims. “That’s it — not a lot of multidimensionality,” he added. “We were very visible but not in roles that showed us as people.”

Wachowski then was asked about her intentions in creating Nomi in Sense8, a trans character played by trans actress Jamie Clayton during the series run from 2015 to 2018. Her response marked the first time Wachowski has spoken at length about the project and how it intertwined with her own coming out, a process that reportedly took a toll and led to her taking a break from showrunner duties. Sister Lana, who co-created the show with Lilly and J. Michael Straczynski, took over during season two.

“Sense8 was written at a time in my life, at this moment of tipping point for me, right before I transitioned. From my perspective, the creation of Nomi as a character was about hopefulness for me because I hadn’t quite let go of where I was. I feel like a lot of the writing I did for that character was below the surface,” she explained. “In the film business, as a trans person, I was always looking content and wanting something else, wanting something different. In all of our films, we always strove to take oddball films in the way that we cast our shows. That was subtextually my trans brain working itself, working itself out of the closet in a lot of ways. So, Nomi is definitely the culmination of that.”

Earlier this year, it was announced that Wachowski had chosen her first follow-up project, signing on to executive produce the comedy Work in Progress. Created by Abby McEnany and Tim Mason, the Showtime series, per the network, centers on Chicago improv veteran McEnany “as a fat, queer woman whose misfortune and despair unexpectedly lead her to a vibrantly transformative relationship.” Wachowski said the series will premiere in December with the love interest played by trans actor Theo Germaine.

“The main character is this queer dyke and all of the casting decisions that I’m making are in the same vein of that but there’s an awareness behind it because I’m also an out and proud trans person so all of the subtext I’m putting in it is more on the surface,” she continued. “So, we’re trying to cast as many trans people just to populate our world so that they are just playing…OK, this waitress happens to be trans, this Lyft driver, they’re trans, too. [There’s] this minister and they’re trans. Once we start seeing ourselves in the background, you begin to understand that we’re illustrating this idea that we are indeed everywhere, even on TV.”

That hasn’t always been the case. With a role on 2007’s Dirty Sexy Money, Candis Cayne was the first trans actress with a series regular role on a network show. When that show ended two years later, it would be years before it would happen again. Then, Adams noted, a boon happened with Laverne Cox on Orange Is the New Black and, later, with breakout shows Transparent and Pose leading the way, the latter of which just earned FX an Outstanding Drama Series nomination for next month’s Emmy Awards along with a best actor nom for Billy Porter.

Canals then detailed his journey — and relentless spirit — with bringing the story of trans women living their lives in and around New York’s ball scene. “It had everything going against it,” said Canals. But one thing it had in its corner was Ryan Murphy. “Ryan believes in equity and equality and that’s why this show exists. My persistence and his power.” 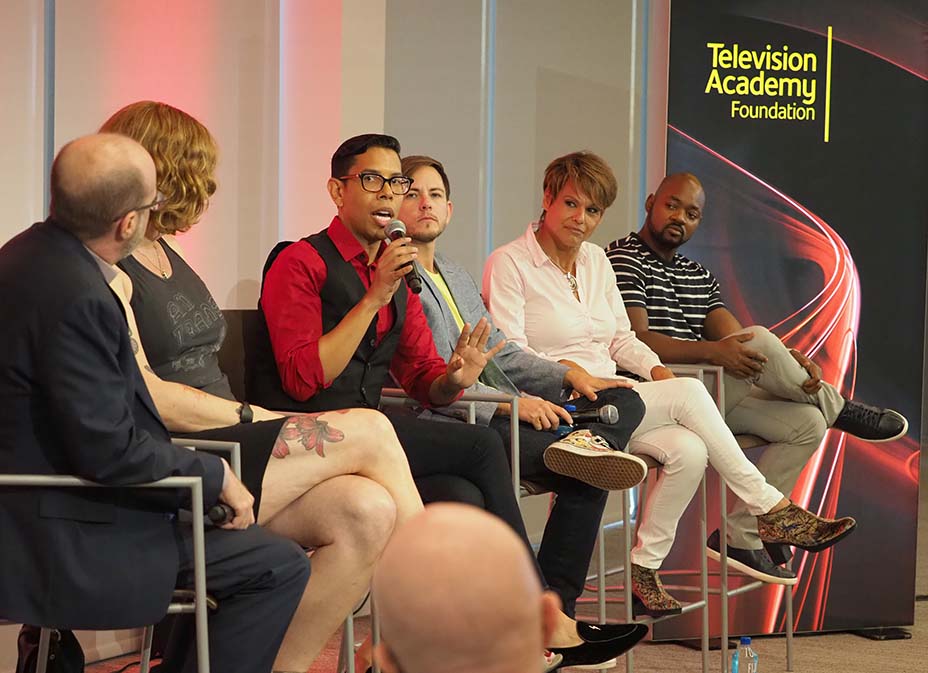 Adams asked Canals how he cast the show, comprising trans talent Mj Rodriguez, Indya Moore, Angelica Ross and Dominique Jackson. “Find someone who is as powerful as Ryan Murphy and collaborate with them. It’s just that easy. That’s the quote.”

Davis also delivered a soundbite when he talked about the impact of playing a trans man on Grey’s Anatomy, one of TV’s most successful and longest running shows. “It’s my dream role as a human being,” he said, explaining how his character’s identity has only been a piece of his humanity, not his whole self or arc. “I get to play a guy who doesn’t have to have a big reveal. I’m a doctor.”

Speaking of reveals, Adams brought the panel to a close with a forward-looking question. What does the future look like?

Canals answered first. “I’ve always felt success will be when our women can go off beyond Pose and be cast in any role and they aren’t specifically being called to play trans women,” he said, adding that out of 500 scripted shows from 2018, only two centered on trans people. It’s imperative to change that fact, he said. “There are people’s lives dependent on the work everyone on this panel is doing.”

Billings then delivered a mic drop moment, that served more as a call to action than a prediction of what lies ahead.

“Art is literally the human experience. It is the dialogue we create to speak to people that don’t speak our language. If you are doing nothing, you are part of the problem. You are stopping people from living their life fully.… It is a revolutionary act for a trans person of color to walk out my front door. People want to murder me. We are being systematically assassinated in this country because of what we are,” she said. Then she turned her attention to anyone 30 years old and younger, slamming the generation for shirking responsibility. “I am sick and tired of hearing you complain about the government and fundamental rights, about this country. I am tired of hearing your words. I’m tired of hearing ‘I’m sorry.’ I want ownership. Take ownership of the problems. All of us are responsible for all of us.”

In her closing remarks, Wachowski answered the question by promoting listening as a form of responsibility.

Lilly Wachowski on Sharing Her Trans Journey: "You're Not Always Going to Change People's Minds"