Tracy Letts, the profusely gifted playwright who also happens to be a brilliant actor, or vice versa, is working in an elevated sitcom mode as well as a revealing personal vein in Linda Vista. The self-inflicted woes of a middle-aged white man, victim of his own inebriating cocktail of testosterone and narcissism, might seem a tone-deaf subject for character study in our current moment of masculinity vivisected and reconstructed. But don’t let the slick barrage of one-liners deceive you into thinking there’s no room here for bruising self-examination and perhaps even tentative growth.

A human car crash of smart-ass superiority with the resignation of the self-described loser, 50-year-old Dick Wheeler, who goes by his surname, is played with cracked bravado by the terrific Ian Barford in this production first seen in 2017 at Chicago’s Steppenwolf Theatre Company, Letts’ longtime stage home. It was presented at Los Angeles’ Mark Taper Forum earlier this year en route to Broadway, where the excellent original ensemble is joined by Jim True-Frost as Wheeler’s married college pal Paul.

The “nice view” that comes so uneasily to Wheeler is indicated in the play’s Spanish-language title, which also happens to be the name of the sadly nondescript San Diego apartment complex where he relocates after the emasculating experience of camping out on a cot in his unseen ex-wife’s garage. He followed her from Illinois to Southern California to be closer to their son, who’s now a “zombie” teenager. 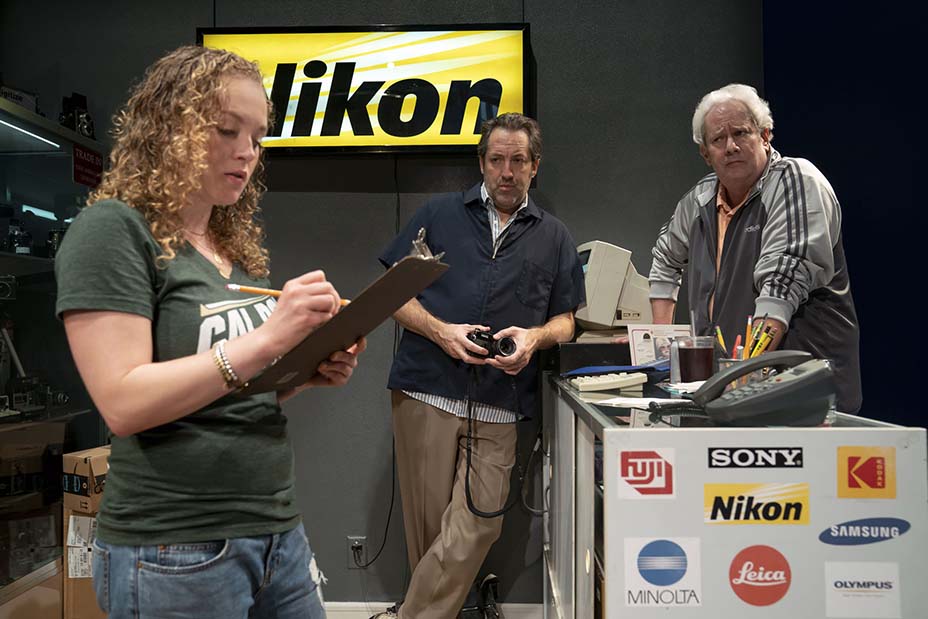 The bro talk as Paul helps Wheeler move in ranges from anti-Trump invective to vintage Ali MacGraw appreciation. Whatever the subject, Wheeler establishes from the outset that he doesn’t lie and he doesn’t feel the need to be polite to people with whom he disagrees. “Middle ground” is a concept of minimal appeal to him. That makes negotiation processes like divorce arbitration and dating a challenge. Yet what’s remarkable about Barford’s spiky characterization and Letts’ witty writing is that although Wheeler has all the fundamental traits of an opinionated jerk, he’s good company. That explains the loyalty of Paul and his wife Margaret (Sally Murphy), who also dated Wheeler back in their Midwestern college days.

A former staff news photographer at the Chicago Sun-Times, Wheeler now works in a camera shop owned by Michael (Troy West), an obnoxious depressive who lives with his mother and spends much time leering at new sales clerk Anita (Caroline Neff). Michael almost makes Wheeler seem like a prize, but Anita keeps them both at arm’s length, focusing instead on her tenuous addiction recovery. She’s upfront about her reasons for not wanting to date Wheeler, who says all accounts of his love life end the same way: “And he was humiliated.”

Nonetheless, he accepts Paul and Margaret’s offer to set him up with their friend Jules (Cora Vander Broek), despite rolling his eyes upon learning she’s a “life coach” with a Master’s in Happiness. The two couples’ double-date at a karaoke bar gives Wheeler ample opportunity to reveal himself as a chronic contrarian, or as he puts it while listing popular musicians he hates, “an astute observer of the time in which I live.” But Jules doesn’t scare off easily, detecting a sweetness beneath his toughened exterior. “You’re like a turtle who doesn’t know he’s lost his shell,” she tells him, her kindness catching him off-guard.

Wheeler and Jules’ first sexual encounter, graphically staged by director Dexter Bullard and the two fearless actors, is a wild exhibit of drunken athletics that gives way to awkwardness as their needs diverge. It’s a hilariously mortifying vignette of crossed wires, insensitivity, potentially ruinous offense and cajoling reconciliation that makes you laugh and cringe at the same time. The elements of humor and rough-edged charm keep the play on track even as it takes predictable turns.

That happens when Wheeler finds himself providing shelter for Minnie (Chantal Thuy) a 26-year-old, pregnant Vietnamese American who lives in the same building and knocks on his door after fleeing her abusive boyfriend. It’s tiresomely inevitable that Wheeler will end up in bed with her, sabotaging the stability he’s found with Jules, though that development sets up another unflinching sex scene that further chips away at Wheeler’s eroding dignity as Minnie promises, “I’ll hurt you… It’s what I do.” 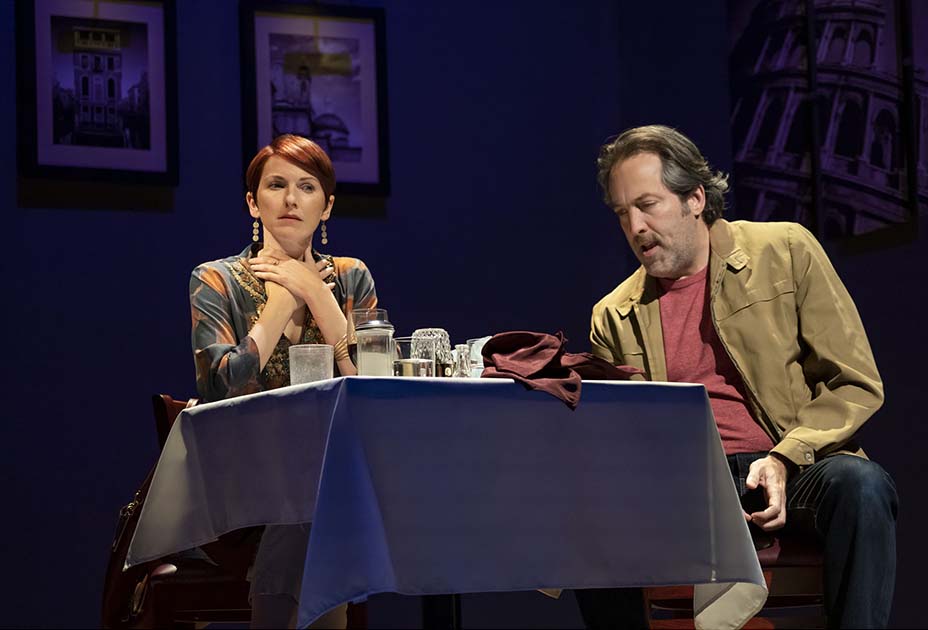 With that outcome so clearly preordained, it’s painful to see Wheeler turn up for a picnic with Paul and Margaret, mercilessly outfitted by costumer Laura Bauer in the midlife-crisis gear of an aging desperado dating a gorgeous young rockabilly punk. His new tattoo is the ultimate cruelty, along with his conviction that he can make it work as a father to Minnie’s child. Since he’s all but given up trying to help his own troubled son, this gives rise to some scathing criticism from Margaret. Paul, on the other hand, offers up rueful truths while assessing the contentment of their marriage and whether it’s all worth it.

This is not Letts’ deepest play; the baseline familiarity of its situations makes the two-hour-40-minute duration seem unjustified, and the photography metaphor for Wheeler’s limited vision lacks subtlety. But the writing is so zingy and the playwright’s voice so sharp in many of Wheeler’s pronouncements — just listen to his takedown of comic-book movies and their core audience: “an entire generation of illiterate, infantilized boy-men” — that it remains entertaining, and Bullard keeps it humming along on Todd Rosenthal’s revolving set. There’s also a genuine emotional undertow in two key scenes with Jules, beautifully played by Broek, that show the callousness of men like Wheeler in cutting ties with vulnerable women, and their audacity in asking for a second chance. Letts isn’t letting any of the male characters off lightly here, but the dignified exit he gives Jules is some of his most compassionate writing.

The melancholy concluding scene with Anita, in which Wheeler is left with the consequences of his lousy judgement but might just possibly be a better man for it, is quietly affecting without indulging in sentimentality. An analog relic in a digital world, Wheeler can barely walk due to the pain of a hip in desperate need of medical attention. But in Barford’s finely nuanced hangdog performance, he appears to be crawling toward redemption — or at least making a start by re-educating himself to actually see the woman in front of him.