After Connie Britton wore the brand’s “Poverty Is Sexist” slogan sweater on the Golden Globes red carpet, “we got hundreds of emails,” says MacPherson. Reese Witherspoon ordered 20 custom “Time’s Up” sweaters for Eva Longoria and other supporters after discovering the brand on Instagram. Candice Bergen and Meryl Streep have also been seen wearing the empowering pieces.

It’s been a whirlwind for the New York-based designer, also the founder of the popular website GuestofaGuest.com, who “had no plans of starting a fashion company” back in 2015 when she did just that with Lingua Franca. “I have anxiety, and my therapist suggested I do something with my hands, so I picked up embroidery I had learned to do from my grandmother when I was a kid, and I stitched ‘Booyah’ on an old cashmere sweater,” she told THR.

Kendrick Lamar, Dave Free Discuss Process Behind 'We Cry Together'

Who’s ready to rock this week @reesewitherspoon style? Let’s do this Monday! #timesup #lfresistance (ps she’s amazing and I love her. That is all.)

She put her creation on Instagram, and friends started asking her to make them versions of sweaters with other phrases, too. Her first full collection for fall 2016 was only after Net-a-Porter fashion director Sarah Rutson came calling. “Everything was done by hand, at the time it was just myself and a woman Kate I had met on Craig’s List. Sarah asked for 2,000 pieces for fall, and this was in July.”

Somehow, she made it happen, and now she employs 50 embroiderers, all of them women she pays a wage of $25 an hour. 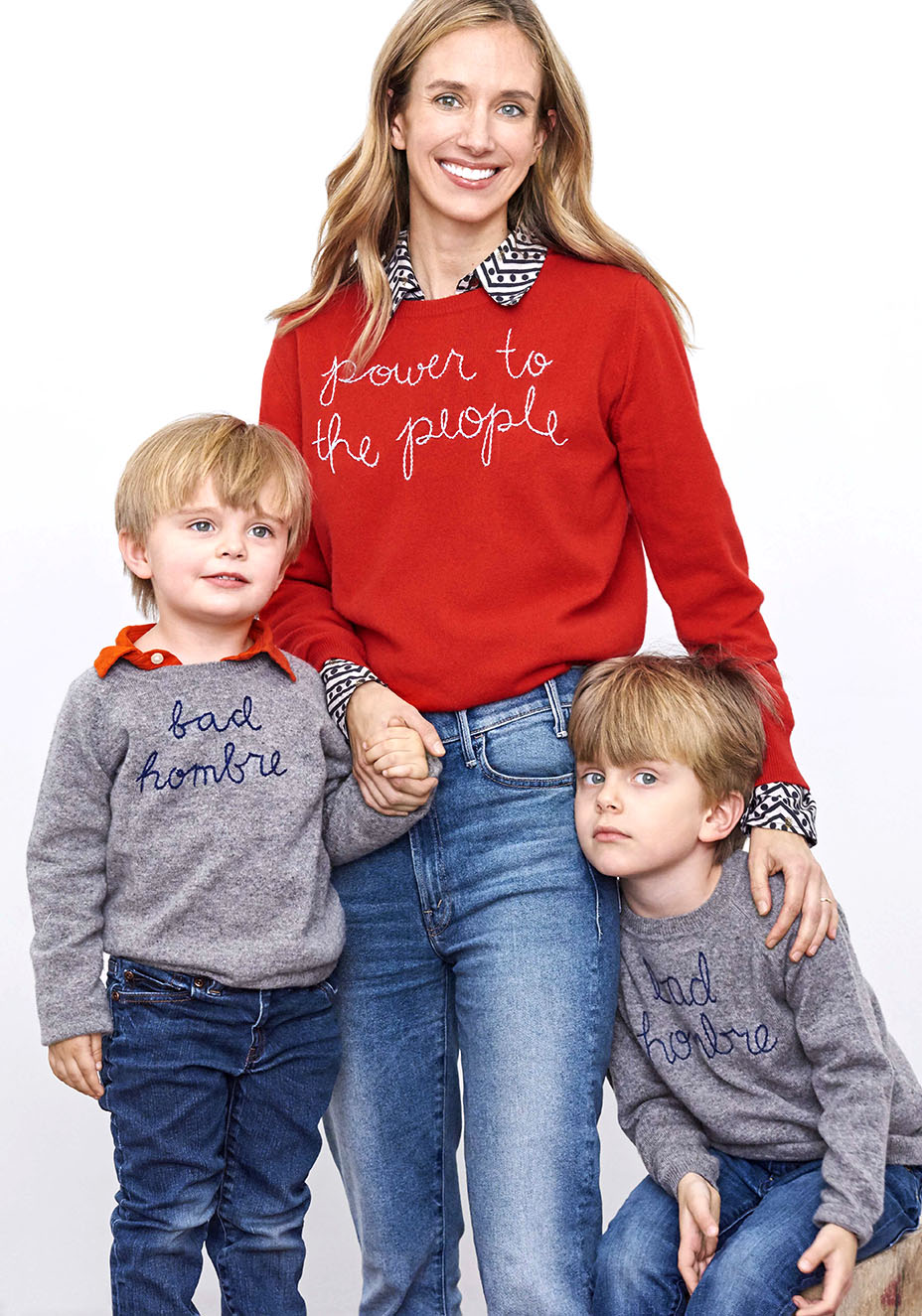 Lingua Franca turned political one afternoon in late January 2017, when the brand’s design studio was rocked by President Trump’s signing an executive order banning travelers from several Muslim countries. “There was a group of embroiderers in my office crying, all young girls from the Fashion Institute of Technology who were Iranian,” says the designer. “Two of them had parents living in Iran and they didn’t know when or if they were going to be able to see them again.”

“I had never had such a personal connection to what was happening in the government, so I stitched a sweater that said, ‘I Miss Barack,” remembers MacPherson, adding, “It made the women who sewed it laugh and smile.” The design touched a nerve, and soon after she added a charitable aspect to her brand, donating $100 for each sale to a customer’s charity of choice. She has since worked with Bono’s One campaign (Britton’s Golden Globes sweater was part of a holiday gifting program from the international relief organization, whose slogan is “Poverty Is Sexist”), with the Women’s March (most recently on a “Power to the Polls” design) and with Time’s Up, donating more than $200,000 in total.

“The biggest criticism we get is the price point, that it isn’t more affordable,” she says of the $380 sweaters. “But I’m trying to build a company that’s not just a trend, but is sustainable so we can continue to employ these women. Everything is done by hand.”

She has several retail accounts, including Saks Fifth Avenue and Goop.com, and plans to introduce product extensions, including sweatshirts in collaboration with the Whitney Museum of Art in New York City.

But if you want a custom piece — like Tessa Thompson’s sweater spotlighting female directors — you need to speak to a live person to place an order, which will take a couple of weeks to fulfill. “Everything is so fast fashion now, to order from us, you have to be thoughtful about it. What Lingua Franca is trying to do is start a dialogue and make people think.”

Candice Bergen @bergenbags starting off the weekend right: french toast at @claridgeshotel and her feelings hand-stitched for all the brits to see!A post shared by Lingua Franca (@linguafrancanyc) on Sep 30, 2017 at 5:34am PDT