The latest book from cartoonist Lisa Hanawalt is something different from her earlier releases, yet fits right into a body of work that includes both absurdist, knowing anthologies like My Dumb Dirty Eyes, and her role as production designer and producer of Netflix’s BoJack Horseman.

Coyote Doggirl is her first full-length graphic novel, and a dark comedy featuring anthropomorphized animals in human settings; at once a subversive take on, and celebration of, Westerns, it follows the titular character as she and her beloved horse Red try to escape from a trio of bad guys out for revenge, launching her into an adventure that’s both silly and heartfelt, offering a new take on a very old genre.

Ahead of a brief Bay Area tour next month, Hanawalt talked to THR about the new book.

What are the origins of Coyote Doggirl? You were serializing this online back in 2013 — did you know then this would eventually be your first full-length graphic novel?

I didn’t know it would be a full-length thing! I think I had just come off art directing the pilot for BoJack, before it sold to Netflix, and I wanted to do a little comic just to please myself. My boyfriend and I went on a weekend trip to upstate NY and we watched Butch Cassidy and the Sundance Kid in our cabin — we were on a Western movie kick! — and went for a horse ride in the woods. When we got back, I wrote and illustrated the first chapter of Coyote Doggirl in a week.

Then I just kept going, posting new chapters on my Tumblr. After moving to L.A., I worked on Coyote whenever I had a hiatus from work. Sometimes I didn’t touch it for an entire year. Eventually, it seemed like it could be a full book and, if I didn’t finish it soon, it would drag out forever, so I whipped through making the last 80 pages last summer.

So how does it feel, having created your first full-length graphic novel? Your previous work has all been shorts; were you secretly thinking, “I will create a big graphic novel one day!” that entire time?

I never planned it. I was surprised to find how similar writing a graphic novel was to making one of my mish-mash “one-woman anthology” books. It’s still just a collection of different pieces when you break it down, this one just had more continuity. I’m glad I finished it instead of throwing it away. I almost did!

You mentioned watching Butch Cassidy before, but what made you want to make a Western? Part of me wonders how much of it comes from your famous love of horses, to be honest, with Westerns being full of them.

That’s a big part of it! I also love Westerns as a pure fantasy about being tough enough to live off the land and travel through the wilderness with ease. I’m not that kind of person, but I wish I was.

The book deconstructs and critiques the Western genre in a lot of ways, whether it’s the undercutting of loner machismo or the representation of the native tribe who are entirely unlike the “noble savage” trope so common in the genre. Did you set out to satirize the genre, or was this merely the result of you following your instincts as you went along?

It was mostly following instincts. I never thought “I’m going to lampoon the western genre!” but it just ended up that way because of the perspective I approached it with. I tried to satirize the idea of natives being magical or perfect or existing just to help the protagonist. They’re mostly a force for good and for reciprocity, as I think most people are.

Beyond the comedy, Coyote’s backstory — which involves attempted sexual abuse — sets up the traditional Western revenge fantasy, but also feels unexpectedly contemporary and a conscious attempt to do something new or different with the genre’s cliches. Was this a conscious effort to address the lack of responsibility for/reaction to violence against women in Westerns?

I just wanted to tell that story from my own point of view. Most westerns — and movies in general — are written/directed by men, and even when they’re sensitive towards the subject of female pain, women still aren’t in control of the narrative.

I feel like I’m asking all these weighty questions and need to add, “This is actually a very funny book,” to reassure people. Were you conscious of juggling tone when working on it? Did you have moments where you thought, “No, wait; I need to have something funny here”?

The tone of this book is very close to my tone as a person, I think. Sometimes life is so sad and violent and frustrating that you wish you could just skip those parts… but if you turn a few more pages, something really funny, delightful, flippant, goofy [or] sublime will happen. What goes down must come up? I really go with my gut and with what perks up my ears when finding the tone of a story.

The book feels very organic in the way it unfolds, even as you go from serious to silly and back in the space of a few pages — I don’t want to ask, “How conscious was this,” because it sounds as if I’m suggesting you don’t know what you’re writing, but I’m curious how much of the book’s complexity was pre-planned, versus what seemed right in the moment.

I don’t have a strict writing formula. This book loosely follows a “Hero’s Journey” story pattern, but it wasn’t super conscious. It’s just likely to happen if you’re constructing a satisfying little yarn, I think! I’m always very organic and loose at the start of projects like this, but there’s a lot more complexity and planning at the end to make sure it ties together?

My process with this book was very similar to writing a script — I wrote out most of the dialogue and outlined the moments of action and visuals I felt were important, then I went back and filled-in with chunks that would help tie the larger elements together. I cut out scenes that made the story drag, with the idea that I could always use those bits later. Then I printed out all the pages I had and laid them out on the floor, figuring out what parts would feel like a nice surprise as the reader is physically turning the page. Some of the plain watercolor pages are used to add a pause between scenes, and to make sure moments land on the right pages. Writing is mostly unromantic, but there’s a tiny bit of witchcraft in finding the moments that are really going to crackle for me, in any story.

The end of the book is poignant, but open-ended enough to suggest that Coyote could return in the future. Could you see yourself doing more with Coyote Doggirl at some point?

Yes, maybe! I still have a bunch of fun bits and bobs I didn’t use in this book for whatever reason. I like Coyote as a character, because you can plop her into any situation and she basically writes herself. At least that’s what it feels like. 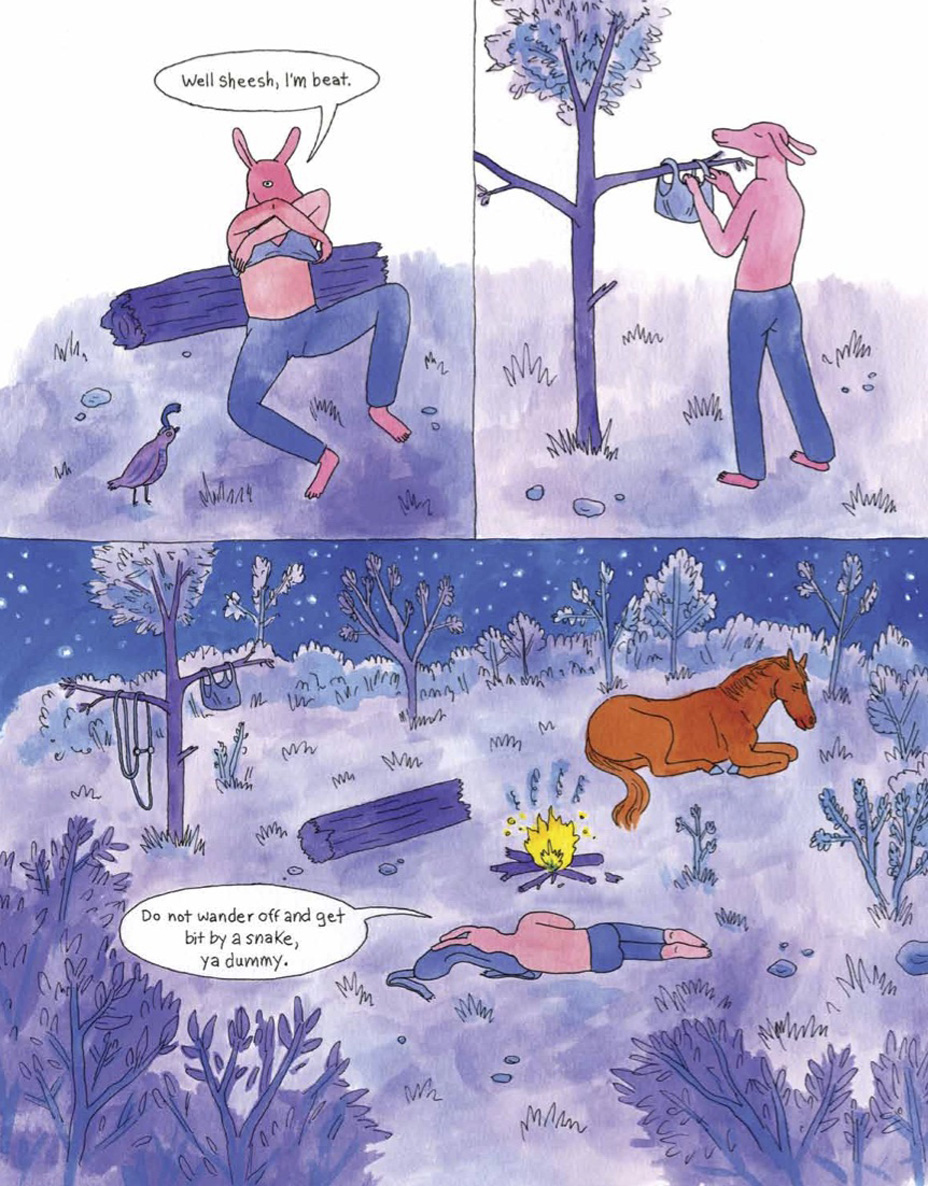 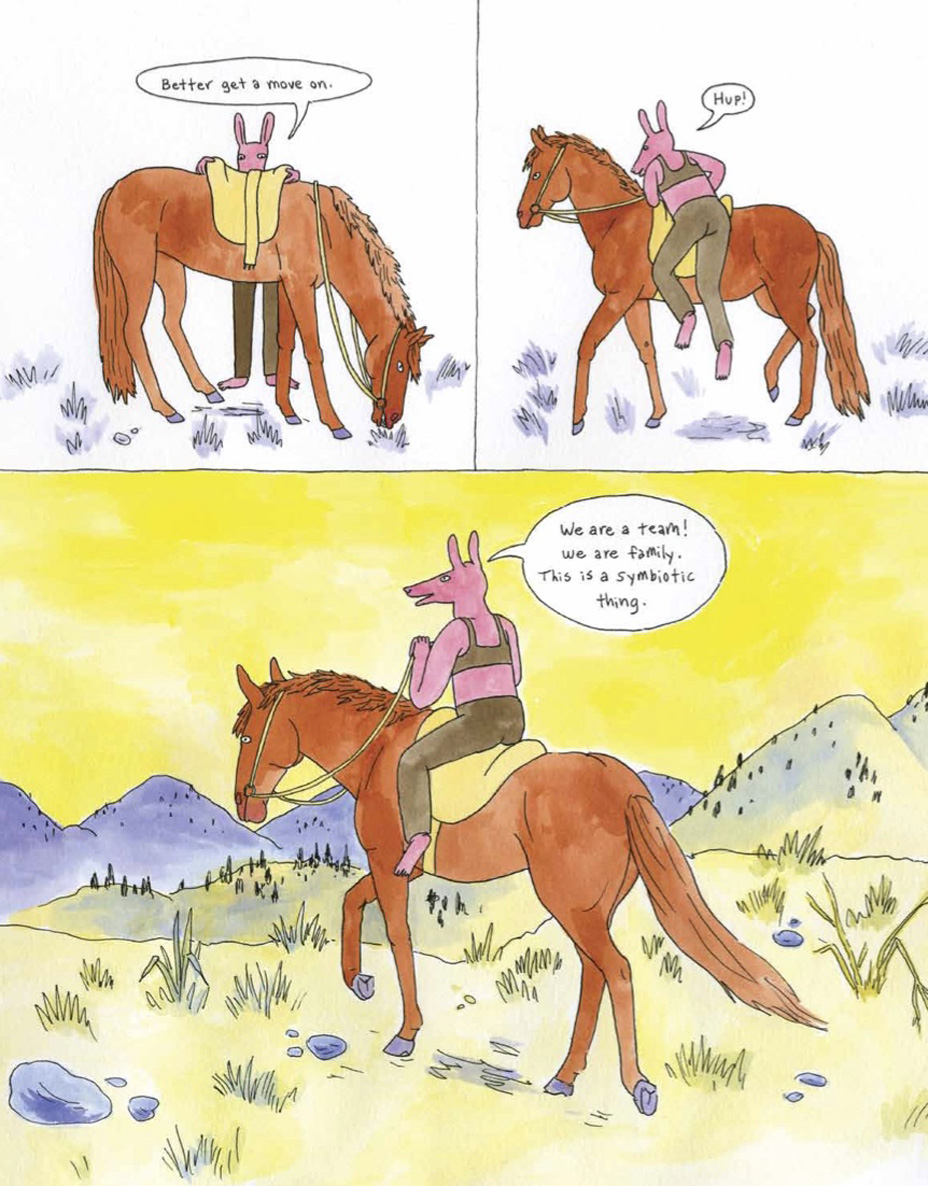 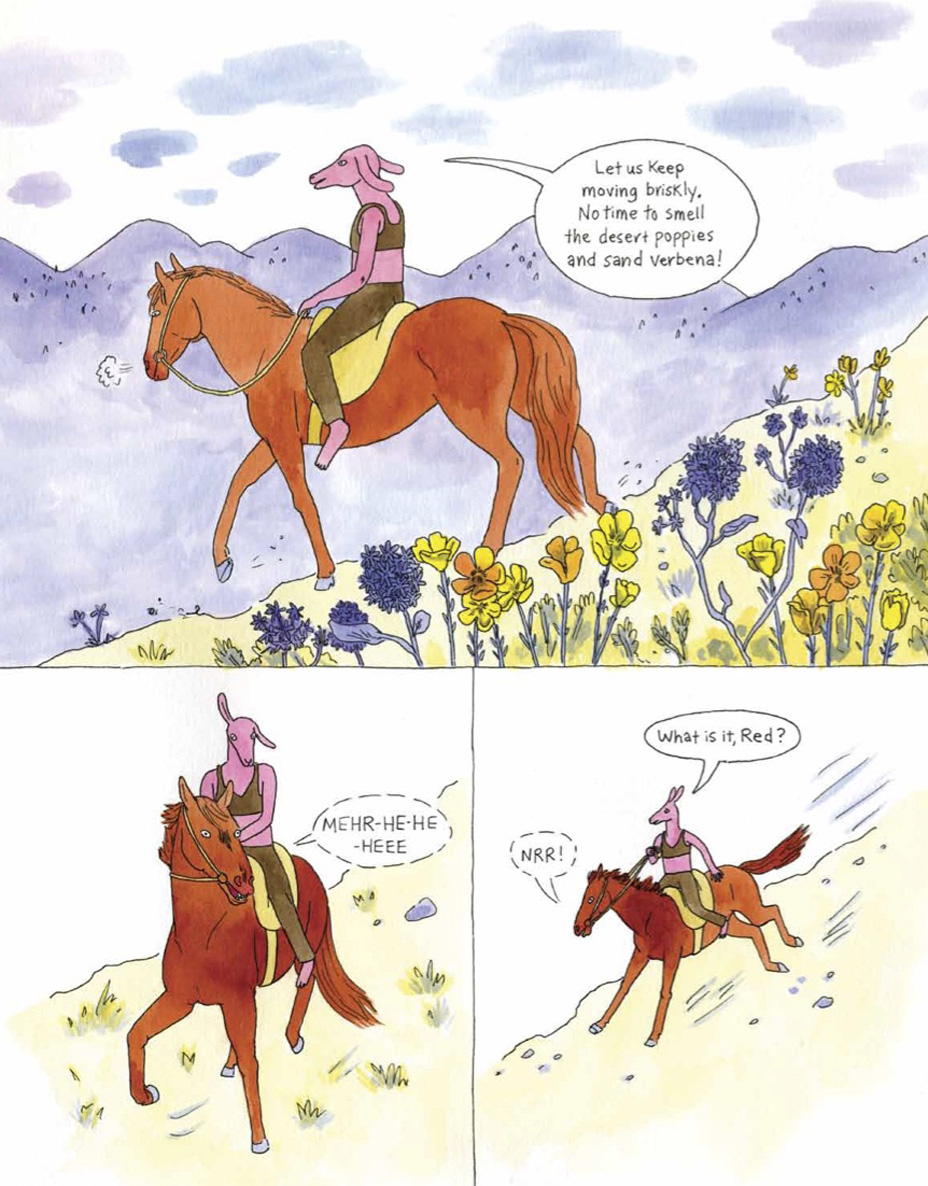