An audible shudder of revulsion ripples through the audience near the end of the scintillating Broadway revival of The Little Foxes, when Michael McKean, in a coolly hardened performance as the Machiavellian Ben Hubbard, casts a speculative eye toward a future ripe for the taking by grasping families like his in the new century. Despite being outplayed by his sister Regina, Ben remains sanguine. “There are hundreds of Hubbards sitting in rooms like this throughout the country,” he observes. “All their names aren’t Hubbard, but they are all Hubbards and they will own this country some day.”

Ben’s family of merchants took control of the most valuable land and cotton in their Alabama town via a strategic marriage, and while various allusions are made throughout the play to how they cheat their poor customers and charge them crippling interest rates, neither Ben nor his equally contemptible younger brother Oscar (Darren Goldstein) denies it. “Some people call that patriotism,” notes Ben of the one-way channel of wealth distribution by which he operates.

Lillian Hellman’s best-known play is set in 1900 and was first produced in 1939, yet few will fail to perceive its currency in the 21st-century America of Donald Trump, with his $14 billion Cabinet. The notion of that unprecedented concentration of wealth being swept into the country’s highest office on the winds of a populist movement would surely have elicited a bitter laugh from the socially conscious Hellman, whose portrait of gender inequality also has contemporary teeth. Daniel Sullivan’s impeccable production for Manhattan Theatre Club never overstates that modern-day relevance; he simply lets the play’s rock-solid construction and lucid themes speak for themselves via a first-rate cast and exemplary design team.

Sullivan’s old-school refinement as a director is exactly what’s called for in this merciless tale of greed and cunning. The Little Foxes is not a play loaded with subtext that rewards stripped-down surgical re-examination, which would explain why it was among the less illuminating forays into 20th-century American drama for leading experimentalist Ivo van Hove. But served straight, with the right actors, it’s a crackling good yarn.

The closest thing to a radical touch here is having lead actresses Laura Linney and Cynthia Nixon alternate in the roles of Regina Giddens, the hungriest of the Hubbards and ultimately the snakiest; and Birdie, her alcoholic sister-in-law and the one character legitimately descended from Southern aristocracy.

Regina, of course, is the plum. Nobody’s fool, she’s a scheming monster originated by Tallulah Bankhead on stage and by Bette Davis on screen in one of her signature roles. The vicious thrill of Davis barking a death curse at her ailing husband (“I hope you die. I hope you die soon. I’ll be waiting for you to die”) is so indelible that it’s hard to hear those lines without recalling her biting cadences. But both Linney and Nixon put a commanding stamp on the role.

Linney’s Regina is all poised charm, a dangerous beauty carefully choosing the moments to expose her talons and the ice in her veins. Only once her brothers’ reckless deceit leaves her an opening does she strike to inflict damage. Shut out by her father from any inheritance because of her gender, Regina married a man she mistakenly believed to be more ambitious, and has waited years for the opportunity to turn the tables in her favor.

In Nixon’s Regina, that festering impatience bristles alongside the churning wheels of calculation beneath her composed surface. Both actresses make a show of being girlish and pliable when it suits Regina’s needs. But Nixon is more brittle; she’s openly imperious and quite withering in the scorn she unleashes on Ben and Oscar for their betrayal. Likewise on her husband Horace (Richard Thomas) for trying to deny her the wealth and freedom she has spent her adult life craving.

Linney is the more natural fit for the role, playing it with delicious relish, but Nixon bites into it with equal command. 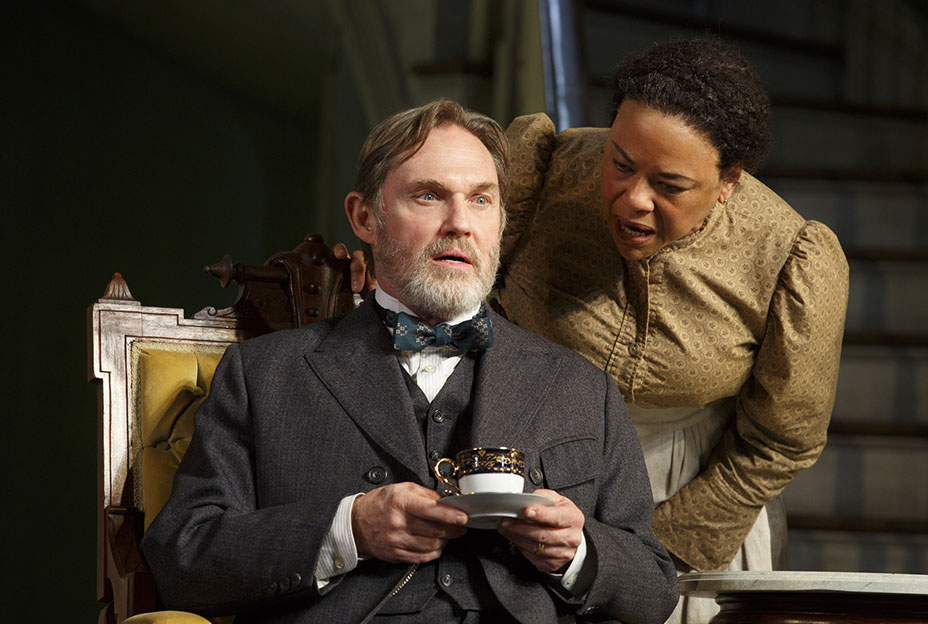 The more discernible difference is not in who’s playing Regina but in the casting of Birdie. In that role, Nixon is shattering. Yearning openly for the kindness and gentility of her upbringing in a happy house where servants were treated decently, she’s a broken woman who sees herself as “a ninny.” She lives in the past and shrinks in the present from an abusive husband who barely disguises his contempt for her.

There’s humor, too, in Nixon’s portrayal, notably in the conspiratorial manner in which she reveals her dislike of her son Leo (Michael Benz), a weasel who has inherited his father’s mean streak if not much of his savvy. Watching as Oscar and Ben talk over Birdie as if she weren’t even in the room, it’s easy to comprehend why she drinks, her excesses explained away as chronic headaches. The vulnerability and deep sorrow in the character make her affectionate bond with Regina’s 17-year-old daughter Alexandra (Francesca Carpanini) and Addie (Caroline Stefanie Clay), the black housekeeper who dotes on them both, quite moving.

Linney’s more self-possessed Birdie is both inured to her situation and gripped by simmering resentment, which she eventually spits out, after loosening up on elderberry wine, in a scene of stunning bottled-up anger. It’s a different take on the character, fascinating and effective in its own way, with Linney’s Birdie almost berating herself for her naivety in being tricked by Oscar’s entirely opportunistic charms.

This is a superbly cast production with incisive character work from McKean, Goldstein and Benz, but more surprisingly in the easily overlooked part of Addie. There’s never a moment that Clay is onstage when she’s not either watching out for the three people she genuinely cares for — Horace being the third, along with Alexandra and Birdie — or absorbing the condescension of Ben and company, who make no apologies for their bigotry and indifference to the struggles of the local black population. And Carpanini subtly shows that Alexandra has a spine; she’s not just “sugar water,” as her mother suspects.

Alongside the two lead women, the standout performance comes from Thomas in magnificent form; he gives Horace a suitably tragic dimension but also an unyielding resolve in direct contrast to his frail health. His five months away in a Baltimore hospital with a failing heart have given him clarity, and while his basic goodness dictates that he at least try to forge a truce with Regina, the first sign of her true colors invalidates that attempt.

Horace’s bone-deep disgust is evident first when Regina tries to bully him into entering a potentially lucrative partnership in a new cotton mill with her brothers and a Chicago businessman (David Alford). The relentlessness with which she presses him while he’s visibly exhausted from his return journey is quite chilling, and his refusal to comply sets off some of the drama’s fieriest explosions. And when Ben and Oscar manipulate Leo into using Horace’s funds without his knowledge, Horace seems almost amused to have his low opinion confirmed of the brothers, who are as ready to swindle their sister as anyone else.

“It’s every man’s duty to think of himself,” Oscar tells his son, displaying the single-minded focus that has enabled the Hubbard brothers to bleed the town dry. The drama is most noted for its juicy depiction of chicanery amongst people with loyalty only to themselves. But Sullivan and his actors don’t neglect the more humane side of the material, in which Birdie and Horace do everything in their power to open Alexandra’s eyes to the vipers around her, paving her way out of there.

Scott Pask’s set is the picture of decorous Southern living at that time, though crucially not so splendid that we don’t understand Regina’s consuming desire for greater wealth. Jane Greenwood’s costumes are also right on the money, from Birdie’s sad, flouncy gowns to the regal black evening dress trimmed with yellow in which Regina beguiles their Chicago guest. This is a production as classy as it is smart, shining a spotlight on a playwright who, unlike such contemporaries as Arthur Miller and Tennessee Williams, is too seldom revived on Broadway.