Before the floodgates opened in the last 15 years or so to almost nonstop screen-to-stage adaptations, movies remodeled as theatrical musicals were less common. A handful of early examples struck the right balance of homage and reinvention — among them Sweet Charity and Nine, from Fellini’s The Nights of Cabiria and 8½, respectively, and Promises, Promises, from Billy Wilder’s The Apartment. But few were as disarmingly funny, clever and tuneful as Little Shop of Horrors, librettist-lyricist Howard Ashman and composer Alan Menken’s inspired 1982 overhaul of Roger Corman’s 1960 sci-fi comedy about a man-eating plant, a cheapie made on recycled sets for a mere $28,000.

The musical is a delightful cross-breed that grafted toe-tapping ’60s pop, doo-wop and Motown onto an affectionate parody of B-movie schlock, all of which continues to flourish in director Michael Mayer’s lovingly staged revival.

What’s most immediately captivating about the limited-engagement production is that, deluxe casting aside, it eschews Broadway scale in favor of a return to the show’s roots in an off-Broadway theater that seats just 270. That accounts for the production’s sell-out business, two-month extension and cluster of hopeful ticket-buyers waiting on cancellation lines at every performance. While it’s become something of a classic, this remains at heart a scrappy little pastiche musical whose charms thrive most vibrantly in an intimate house.

In this case, that puts us closer to a never-better Jonathan Groff as Seymour Krelborn, the Skid Row florist shop worker who makes a Faustian pact with the carnivorous succulent. With his preppy, all-American handsomeness hidden beneath greasy hair, nerdy glasses and baggy costumes — a droll running joke has agents, photographers and TV producers recoiling when they see the eyes beneath the specs once the “strange and unusual plant” brings Seymour success and fame — Groff disappears into a role he was born to play. He’s entirely credible as a klutzy nebbish, an orphan so hopelessly besotted with his co-worker Audrey that he names his weird botanical discovery after her. 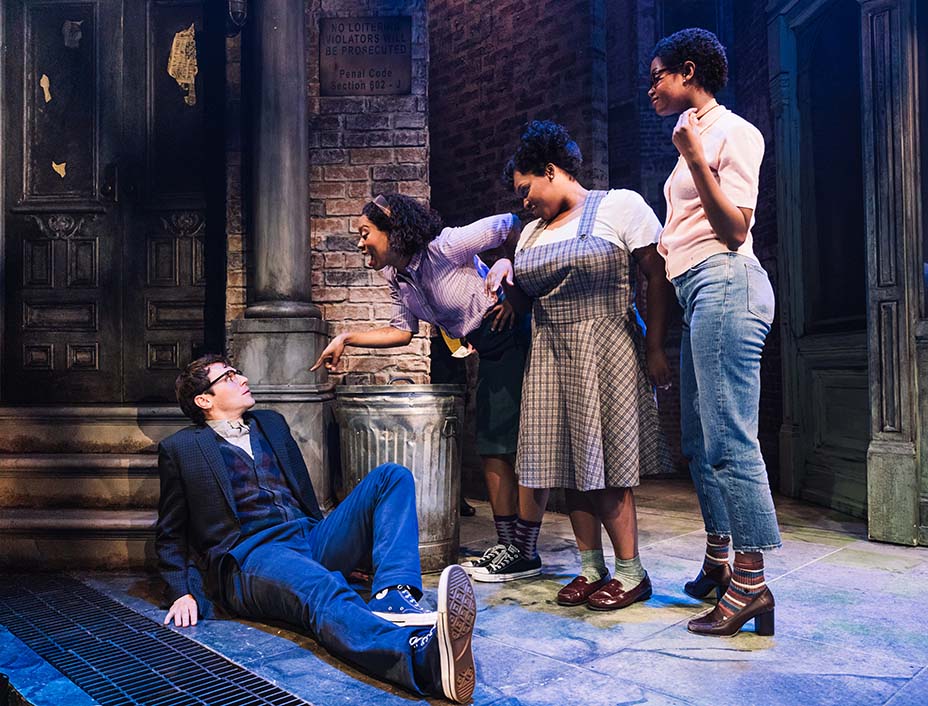 From his first pratfall entrance to his final heart-wrenching sacrifice — a visual nod to Creature From the Black Lagoon — Groff is hilarious, endearing and in tremendous voice, letting loose with a forceful passion that takes timid Seymour by surprise, or dialing it down to a hushed sweetness in keeping with the aching intensity of his feelings. The humor embedded in his deliberately clumsy execution of Ellenore Scott’s choreography alone is irresistible, nowhere more so than when he joins the show’s girl-group Greek chorus of street urchins in some formation moves on “Ya Never Know.” And as that trio, Ronette, Crystal and Chiffon, Ari Groover, Salome Smith and Joy Woods are simply divine, their powerful pipes effortlessly handling big solos or blending in gorgeous harmonies.

The production’s most notable variation on the original mold is its portrayal of Audrey. For anyone who saw Ellen Greene’s performance — in the original off-Broadway run, in London, in the 1986 Frank Oz movie or in the 2015 New York concert staging opposite Jake Gyllenhaal — her iconic characterization as the ditzy blonde with the squeaky, lisping voice remains indelible. That makes it a smart choice for Tammy Blanchard to put a fresh stamp on the role. She’s more jaded Jane Russell than breathy Marilyn Monroe, a va-va-voom type with flaming red Rita Hayworth hair, poured into an hourglass LBD and vertiginous stilettos. But the rock-bottom self-esteem, the literal and figurative bruises of this beat-up beauty who’s been around the block a few times remain enormously affecting.

Blanchard isn’t a perfect vocal fit and has some minor pitch problems, but her performance is a lovely combination of grit and vulnerability. Her yearning is tenderly moving on the soaring “I want” song, “Somewhere That’s Green,” as is her rapturous transformation in the duet with Groff, “Suddenly Seymour,” in which Audrey is purified by the unaccustomed experience of being loved by a kind and decent man — which Seymour remains, despite his corruption.

Those two songs — arguably the best and certainly the most emotional in the show — are peerless examples of the genius of Menken and the late, much-mourned Ashman as a team. The catchiness of the melodies, the wit of the musical references and the humor of the lyrics are ageless, exemplified also in the one-two intro of the title-song prologue and the stirring scene-setter that follows, “Skid Row (Downtown),” which plants the seeds of Seymour and Audrey’s respective dreams to escape to a better life. 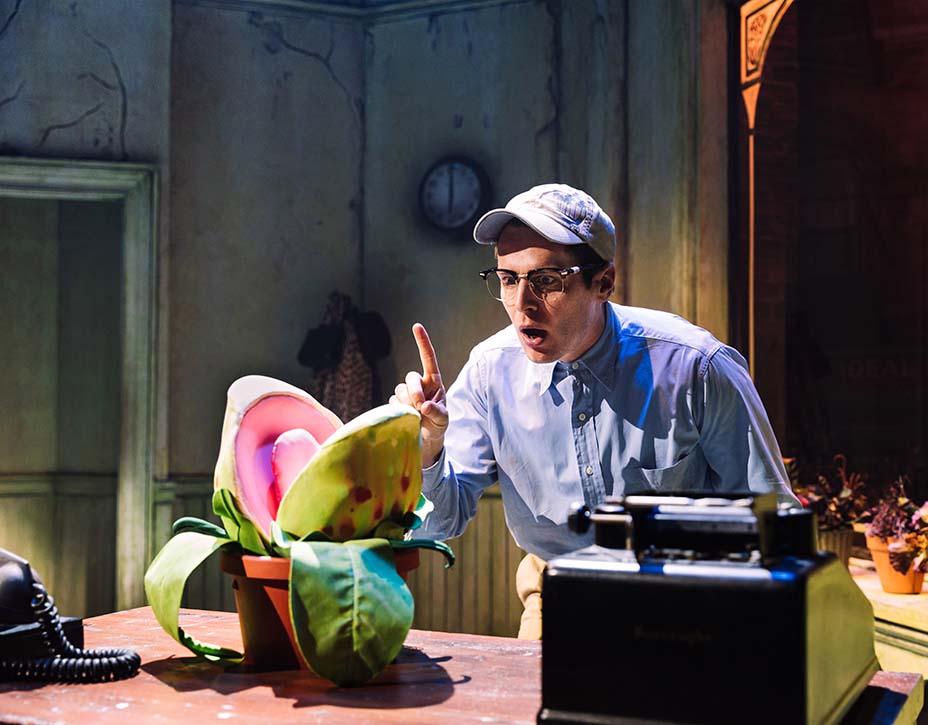 The songsmiths cannot be given enough credit for their role in the rebirth of the movie musical with Disney’s The Little Mermaid and Beauty and the Beast, and their influence spilled over into the Broadway musical, helping to start the gradual re-popularization of an entertainment genre that had been stuck for decades in uncool prison. The superb craftsmanship of this show demonstrates why they made such a winning pair.

The third bit of star casting here is two-time Tony winner Christian Borle as Audrey’s sadistic dentist boyfriend Orin Scrivello, D.D.S., who becomes the hungry plant’s first substantial meal. Tossing off his leather jacket to reveal the orthodontist’s lab coat underneath, Borle puts his own mischievous spin on his line readings, both in the misogynistic douche’s snide dialogue and his triumphant anthem of cruelty, “Dentist.” And Orin’s demise is a hoot, with Borle’s features grotesquely distorted like a funhouse mirror through his full-face nitrous oxide mask as he sings “Now (It’s Just the Gas).” The actor also gets to display his gleeful hambone versatility in a series of fun caricatures as various customers at Mushnik’s flower shop and the folks looking to capitalize on Seymour’s sudden celebrity.

Tom Alan Robbins doesn’t quite measure up to the sparkling leads as Mushnik, the kvetching florist who goes from exploiting Seymour to adopting him when he hears the cash register’s ka-ching. But the duet generated by that newfound sense of family, “Mushnik and Son,” is a joyous interlude, fusing tango with the wildly exuberant dance moves of a Hassidic wedding.

Mayer doesn’t reinvent the wheel here, but he clearly adores the material and treats it accordingly, never forgetting that this cautionary tale about humanity falling prey to capitalist greed is fundamentally an outlandish genre spoof and tragic love story. His pacing is just right and design elements first-rate, starting with Julian Crouch’s florist shop set with its sliding front window, flanked by apartment building stoops on each side, which fits snugly on the cozy Westside Theatre stage. Tom Broecker’s costumes provide expert help defining the characters, and Bradley King’s lighting is especially sharp as the horror escalates and he introduces lurid greens and purples. 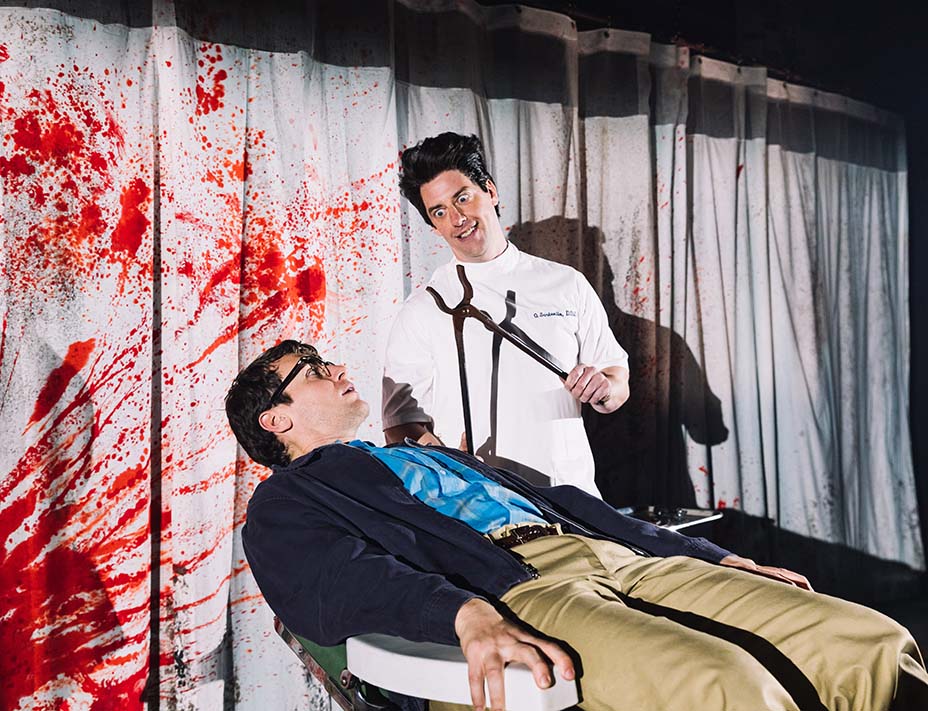 Will Van Dyke’s arrangements and orchestrations for the tight band are another big plus, honoring the score’s original sound and adding some fabulous period-appropriate synthesized electric organ riffs.

The Audrey II, as the killer plant from outer space is christened, is like a Venus Fly Trap crossed with an avocado; it appears in various growth stages, starting in a small pot and ripening to a hefty hand puppet amusingly manipulated by Groff in “Ya Never Know.” By the time it reaches full maturity, all but filling the cramped florist shop, it also acquires the funky cool-cat basso vocals of Kingsley Leggs, who finds all the humor, cunning and menace in the role as he progresses from the cajoling “Git It (Feed Me)” to the sinister “Suppertime,” on which costumer Broecker gives Ronette, Crystal and Chiffon a full Supremes-style glittery makeover.

With a well-received production opening just last month at the Pasadena Playhouse and casting rumors continuing to circulate about a Greg Berlanti-directed screen remake in the works at Warner Bros., the love for Little Shop of Horrors is not going to fade any time soon. This terrific revival will only deepen the devotion for those lucky enough to catch it. 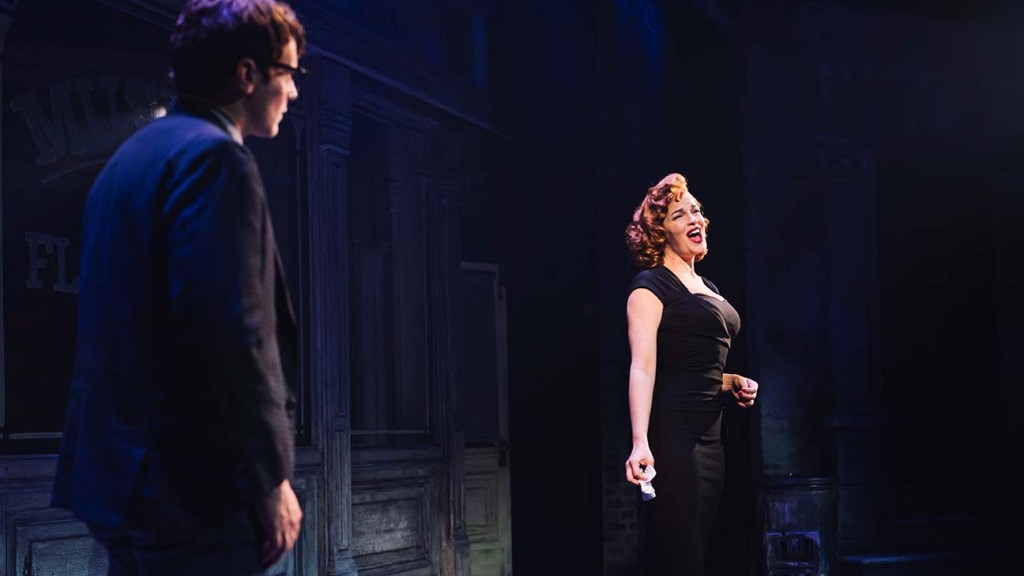