Rose McGowan sitting front row next to Nick Rhodes (would love to hear that conversation), models decked out like fertility dolls, pink tulle mohawk headpieces…it must be London Fashion Week.

London has been in fine form this weekend, proving it is still the fashion world’s designer incubator and outsider haven.

This season is a big one for the city, not only because Riccardo Tisci will debut his first collection for Burberry on Monday (the Burberry stores around town are covered in his new logo print for the lead-up), and Victoria Beckham is returning to show here Sunday after a decade in New York, but because a couple of new establishment British labels are celebrating their 10th anniversaries, not a slouch accomplishment for a fashion brand starting from the ground up. 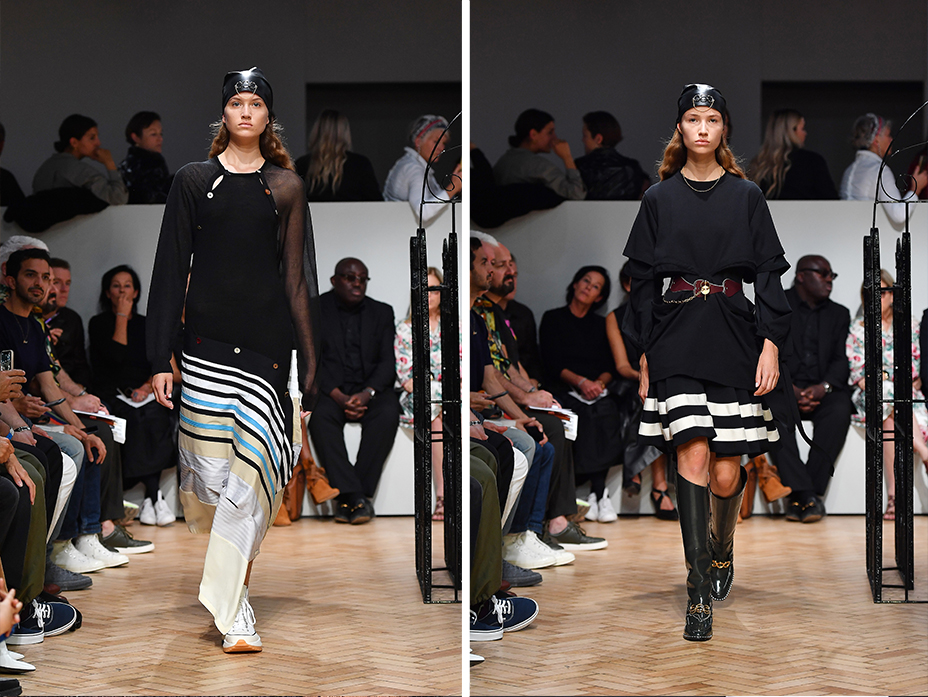 One of those is JW Anderson. The collection he showed Saturday afternoon was a vision of interesting clothing—without pretension but with polished ease.

For those wondering how to fill the void for feminine yet modern clothes now that Phoebe Philo has left Celine, behold this killer JW Anderson collection. #LFW pic.twitter.com/gPJx5ybY9U

Dresses were the hero pieces, and there so many good ones to choose from: striped and fringed scarf dresses, bib-front shirt dresses, and silk sack dresses with printed sleeves and sashes, all worn with cool cinched-ankle boots, or white high-tops with the perfect platform from his latest Converse collab. 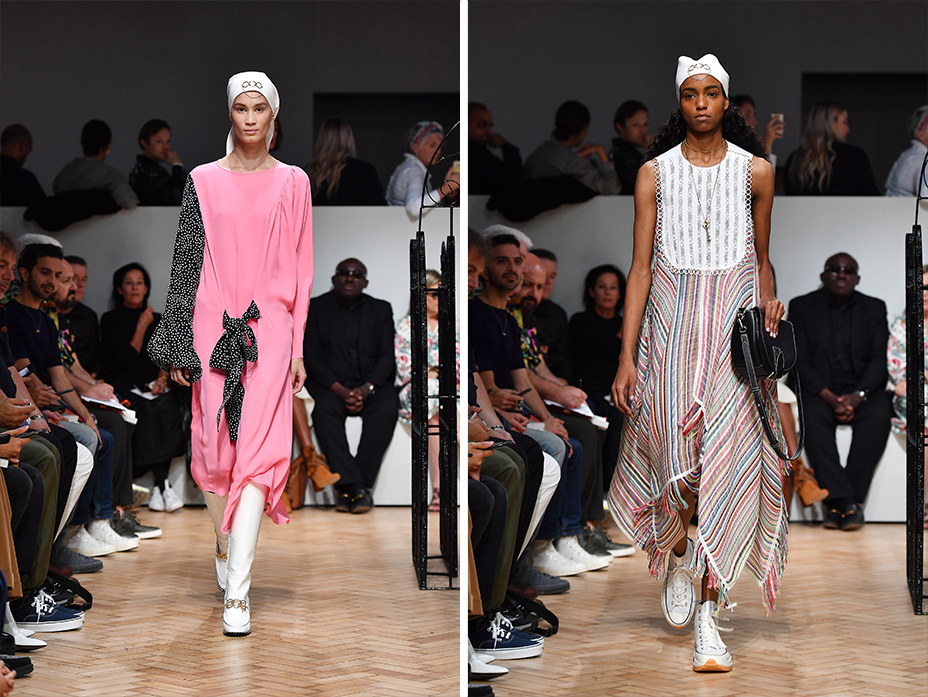 Tailoring was relaxed, from a standout checked blazer with a crochet fringe hem, to patch-pocket shirt suits that would be the perfect summer uniform. And the leather goods were A-plus covetable, as you’d expect from an LVMH-owned brand, including a black-and-white bucket bag and wide belts with gold chain trim. 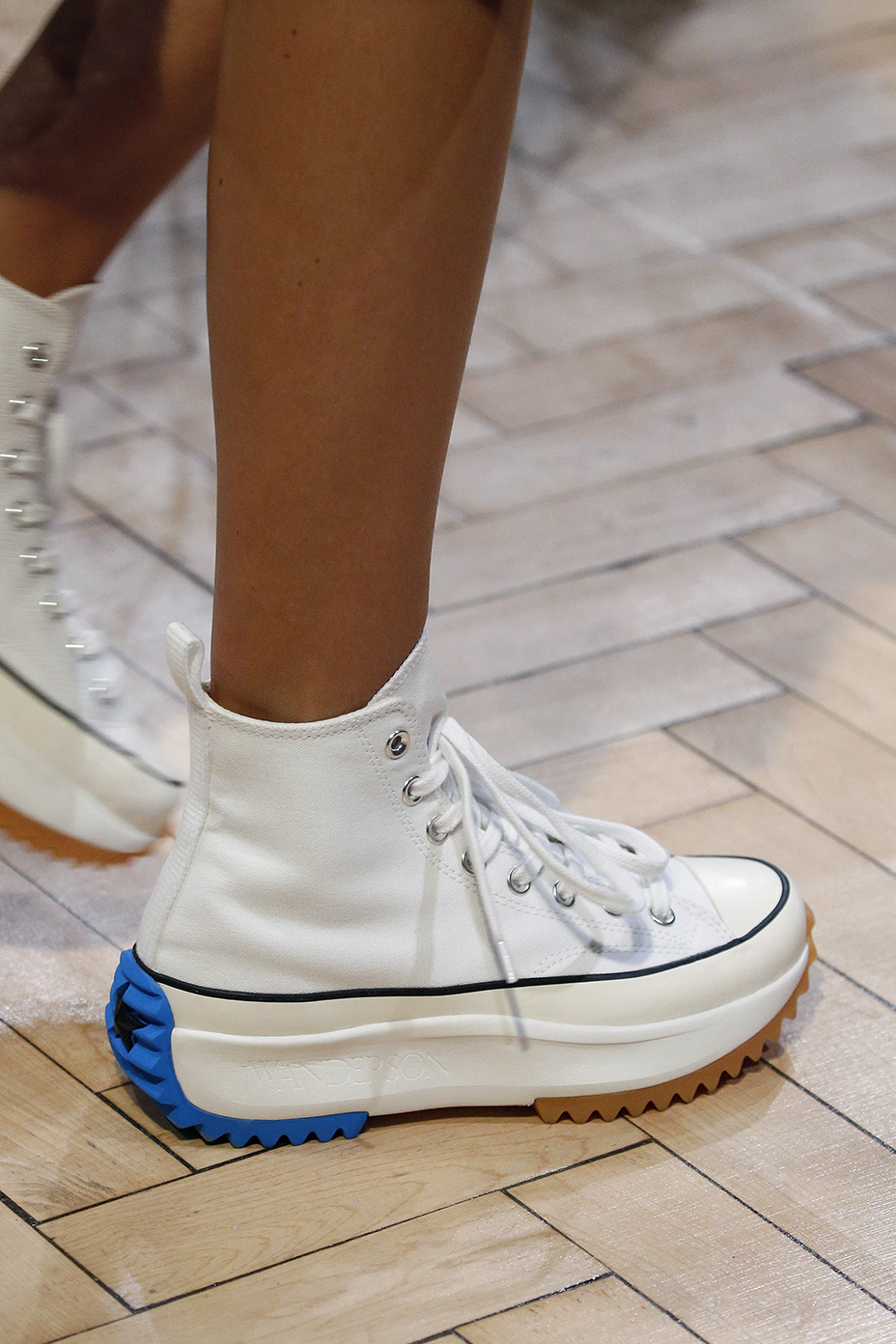 Mary Katrantzou is also celebrating 10 years in business, and her spring collection was a retrospective of sorts as well as a musing on the urge to collect, from flowers trapped in a plastic capelet, to butterflies in a skirt’s netting, to a sculptural frock reminiscent of a decorative objet, a Faberge egg perhaps. 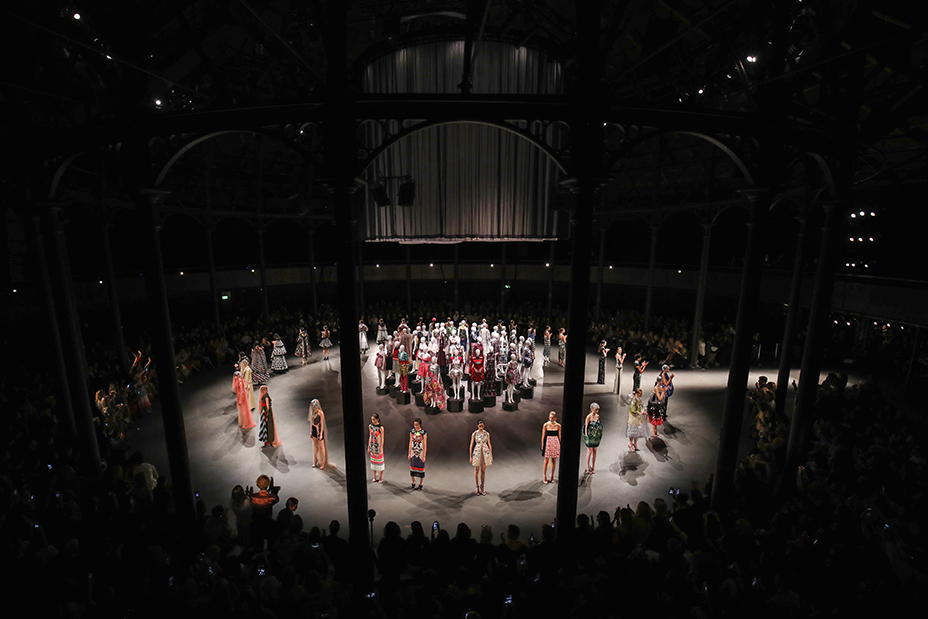 Katrantzou built her business on engineered prints and riffed on some from her personal catalog, from collaging famous artworks on a tent dress, to crafting stunning gowns that made the models resemble vintage crystal perfume flacons, a nod to her very first collection. 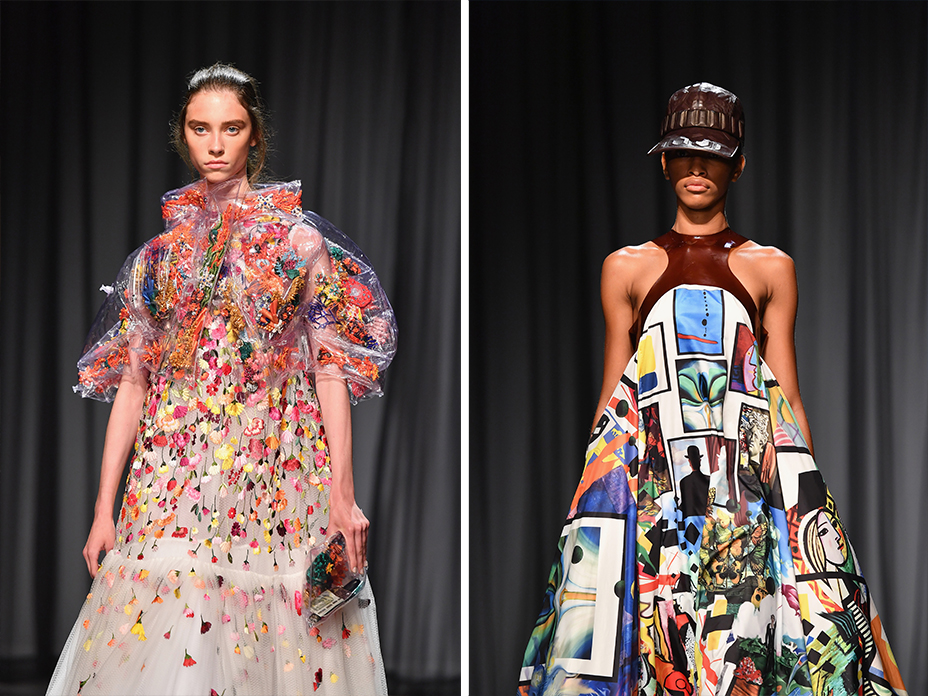 For a finale, a curtain raised on a tableau of her archival pieces, a collection in its own right. 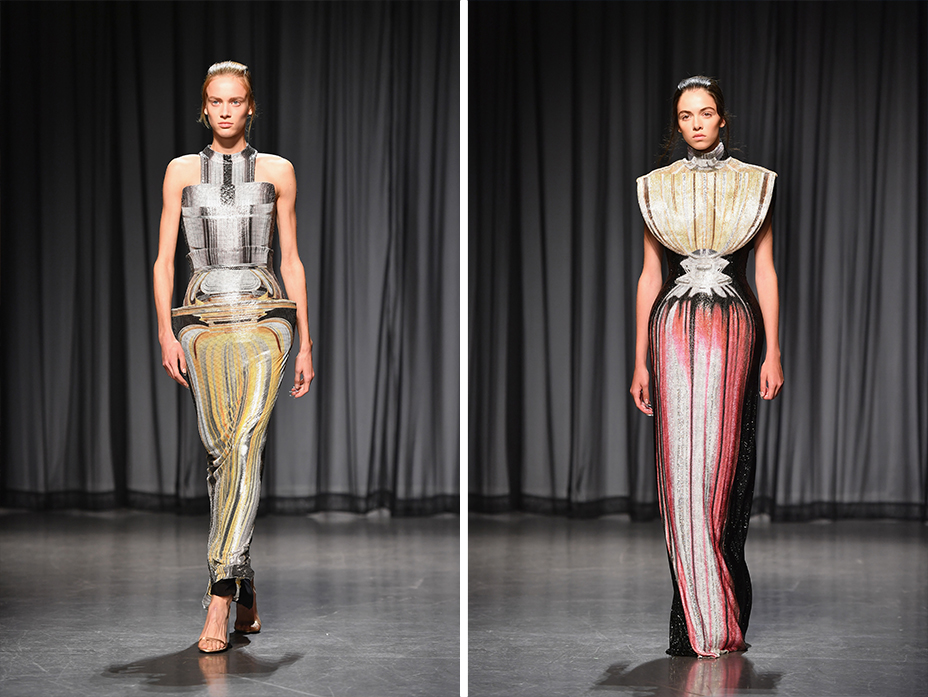 London has also always been a haven for rebels and misfits, Vivienne Westwood and Alexander McQueen, both the subjects of recent documentary films, among them.

It is in that spirit that you have Pam Hogg, who has outfitted musicians such as The Cult, Siouxsie Sioux, Debbie Harry and more, and entertained Brooklyn Beckham, flame-haired, Oscar-winning costume designer Sandy Powell, Le Bon and McGowan in her front row Friday night. 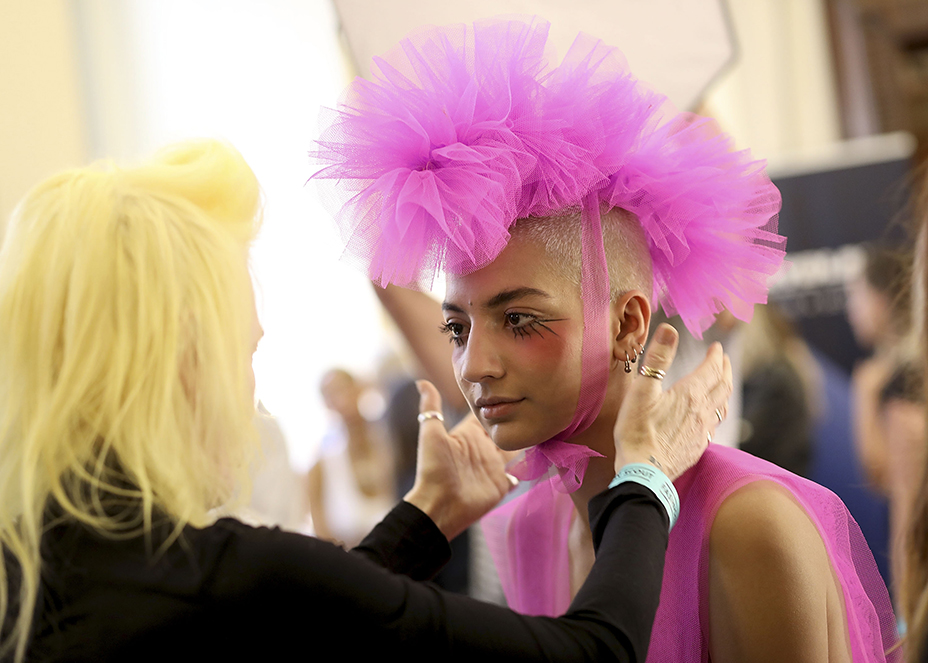 Her presentation was strip-show provocative (how old is Brooklyn again?), starting with the male opener, wearing nothing but padding emphasizing his private parts. The fetishistic vibe continued with OTT headpieces, see-through lingerie looks, thongs and print body-con dresses, with plenty of exposed nipples and cheeks proving that body parts, too, can be their own kind of fashion statement.

Another rock star fave, Gareth Pugh showed a collection inspired by “outsider society” — Freddie Mercury, David Bowie, Judy Blame and the underground vogueing ball scene that has inspired shows such as Pose were all mentioned in the show notes. 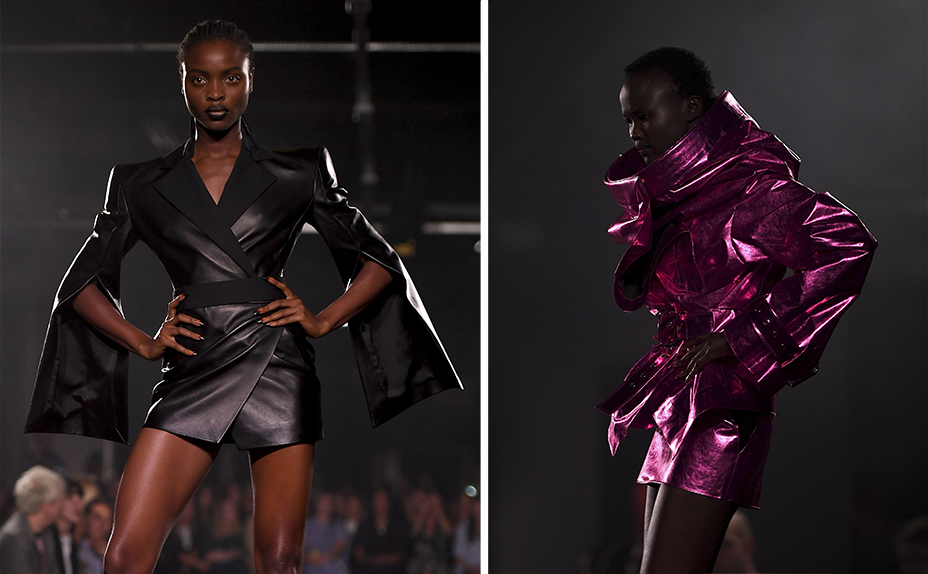 No surprise, the venue was plenty dark, with models hamming it up for the cameras, moving from platform to platform while balancing on platform shoes, wearing funnel-neck or sharp-shouldered leather minidresses and red checked bodysuits with glam rock appeal. It was the most commercial distillation of his sculptural vision I have seen in some time. Perhaps Beyonce, Lady Gaga and Kylie Minogue should come calling on London again? 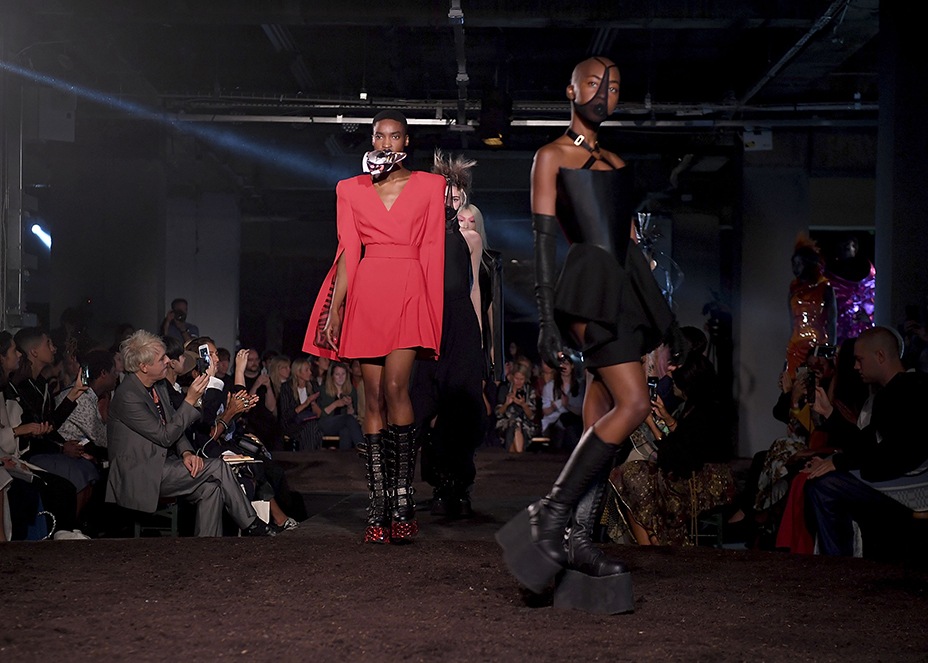