Continue to The Hollywood Reporter SKIP AD
You will be redirected back to your article in seconds
Skip to main content
February 21, 2017 10:28am

In what we imagine might, just might, be a reaction to the depressing state of the news of late, designers in London showed a confetti explosion of sequins on Monday. It’s hard to be pessimistic about global affairs when you’re confronted with sparkling rainbows, dancing male models in pink slogan t-shirts, and tops screaming ‘MORE GLITTER, LESS TWITTER.’

In that sense, we have a lot to thank Ashish for. The London designer of Indian origin has never failed to put a smile on fashion faces, even in the darkest of climates. For his fall 2017 show, he presented the most uplifting, positive collection anyone could hope to see. We even spied a few tears of joy in the audience at slogan shirts such as “You are much lovelier than you think, ”Love sees no colour” and our personal favorite “Why be blue when you can be gay?”

London Fashion Week: At Burberry, a Focus on Craft and Clicks 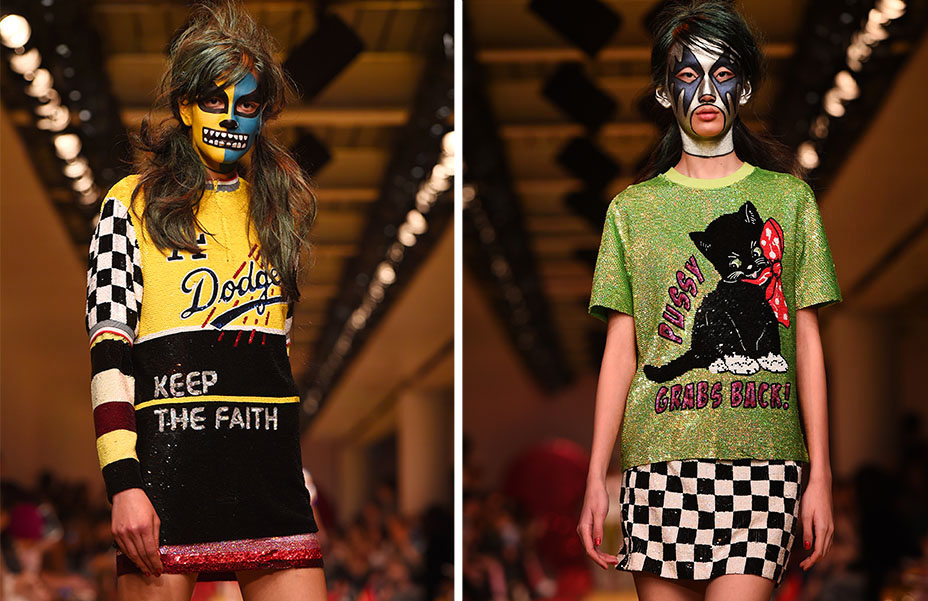 If it wasn’t already obvious that this collection was a Trump rebellion, one model sported a cartoon cat declaring “PUSSY GRABS BACK!” which brought applause from the audience and a standing ovation for Ashish’s final bow.

If Ashish is king of the sequins, its safe to say we never expected them to make an appearance at Erdem. However, as this seems to be the season of shining sequins, we found a more grown-up take on them at this show. Worked into puff-sleeved gowns and paired with dainty satin flats, this was certainly more black tie, less party monster. Sequins were even laid under ribbons of velvet and grosgrain, and floated into fluted chiffon sleeves in a look worn by yet again, London’s hit model Adwoa Aboah. 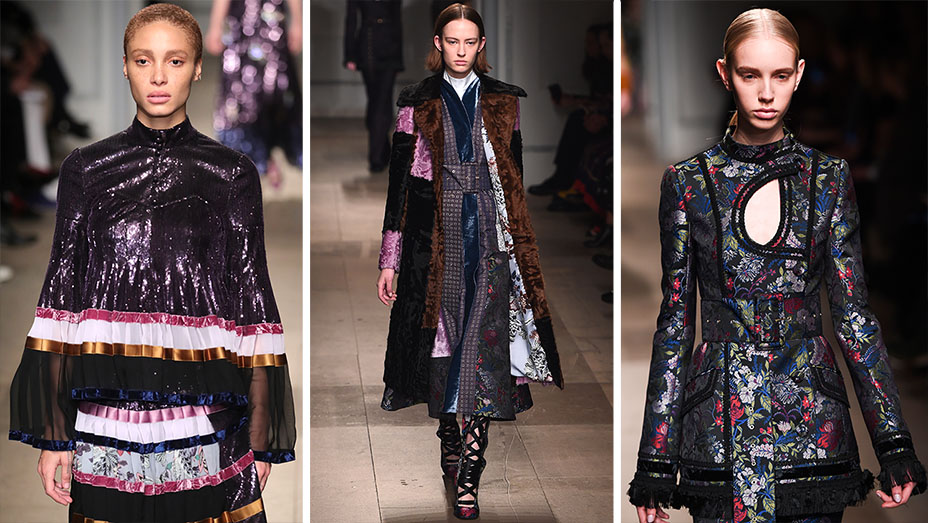 By this point in London Fashion Week, it’s starting to feel like we’re stuck in a 19th century time warp, with ruffs and cuffs and ruffles and lace suffocating the industry like a whale-boned corset. 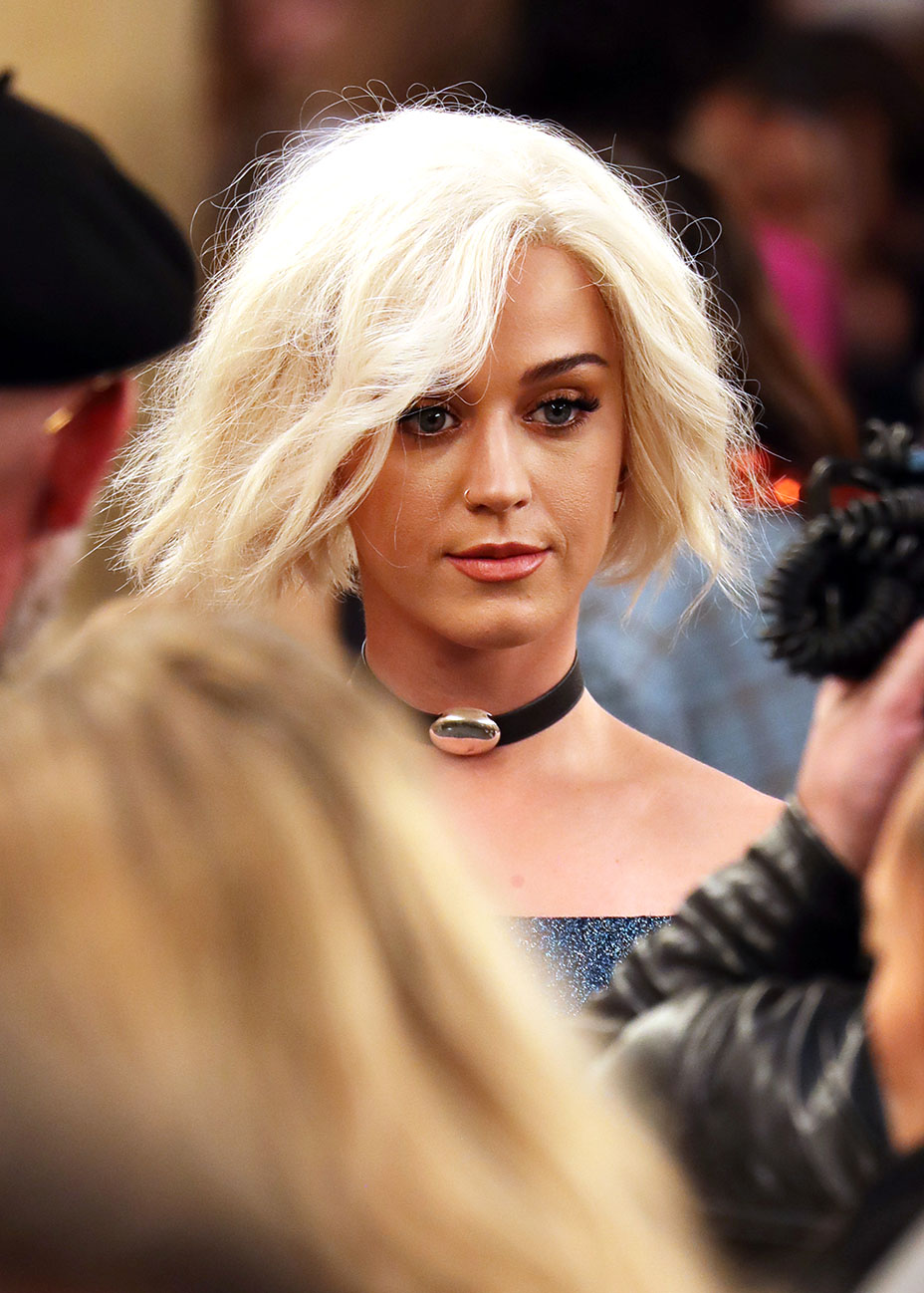 It was a welcome change, then, to see the ever-futuristic Christopher Kane, all techno fabrics and slick, robotic silhouettes. The queen of intergalactic fantastic Katy Perry even rocked up to the front row, the first major A-list appearance of the week, in a sparkly Lurex number from the designer’s pre-fall collection. An interesting choice of celebrity for Kane, who usually reserves his seats for young up-coming actresses and British cool kids, we couldn’t fathom why Perry would attend this instead of Ashish. 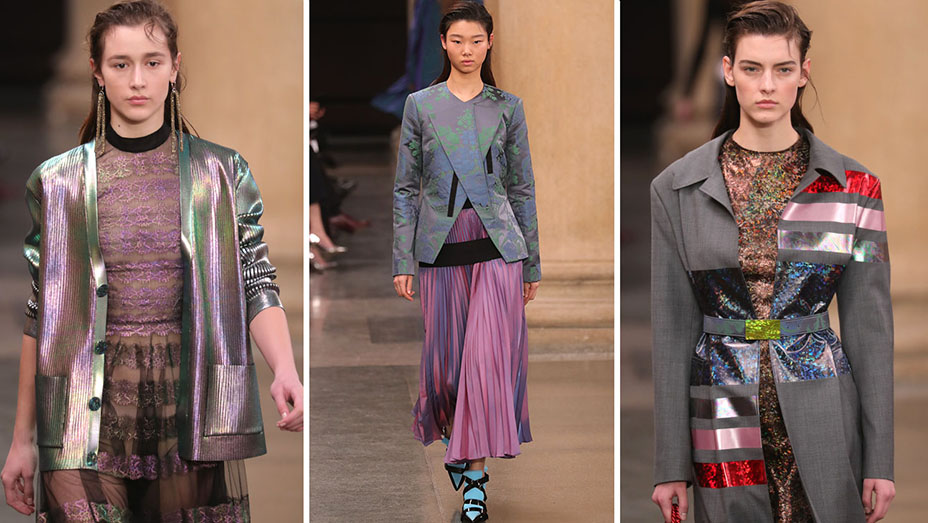 Even a silk damask print, once reserved for the sofas of stately homes, was modernized to an extreme with origami folds and razor-sharp shoulders.

Knitwear is one of the designer’s best-sellers (perhaps given its relative affordability), and this season the he thankfully eschewed the now-ubiquitous ruffled sleeve for jagged layered pockets instead. 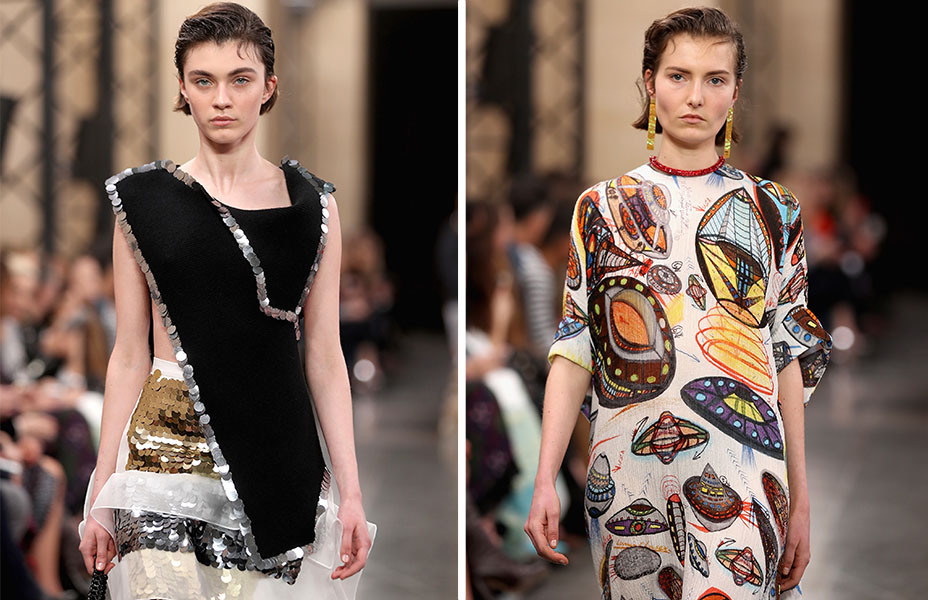 Kane has long been a pioneer of fabric innovation through technology advancement, which this time showed up in holographic silk dresses, metallic shot taffeta that changed colors in the light, and Space Age wool cardigans that appeared to be made of liquid metal. If all this wasn’t quite galactic enough, a flowing skirt was printed with UFOs by Japanese artist Ionel Talpazan.

On a more sedate note, Roksanda Ilincic’s show opened with a moving tribute to Australian fashion designer Richard Nicoll, who passed away in October. His close friends (including Roksanda) collaborated with Pantone to create a new color, Nicoll Blue, which is currently displayed on a wall in the official fashion week tents. 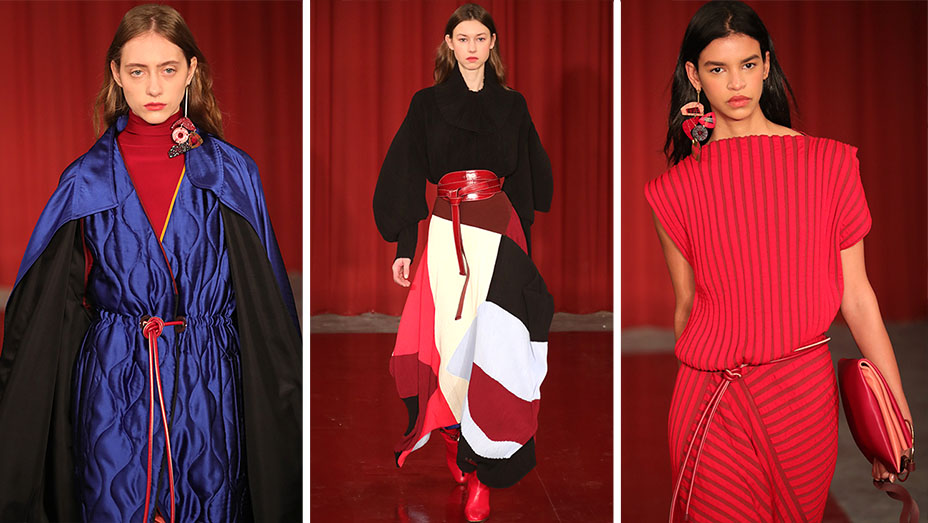 Pianist Michael Nyman accompanied the first model as she glided around the catwalk solo, in a head-to-toe Nicoll Blue look, before the lights dimmed slowly and dramatically, and the full show began.

Despite the fact the two were close friends, Roksanda was still the right person to work this hue into her collection, as her mastery of color is one of her greatest strengths. The rest of the pieces that followed were shades of terracotta, burgundy, mustard yellow and electric blue, in draped, oversized silhouettes gathered by the obi belts that have become a core style for the designer. 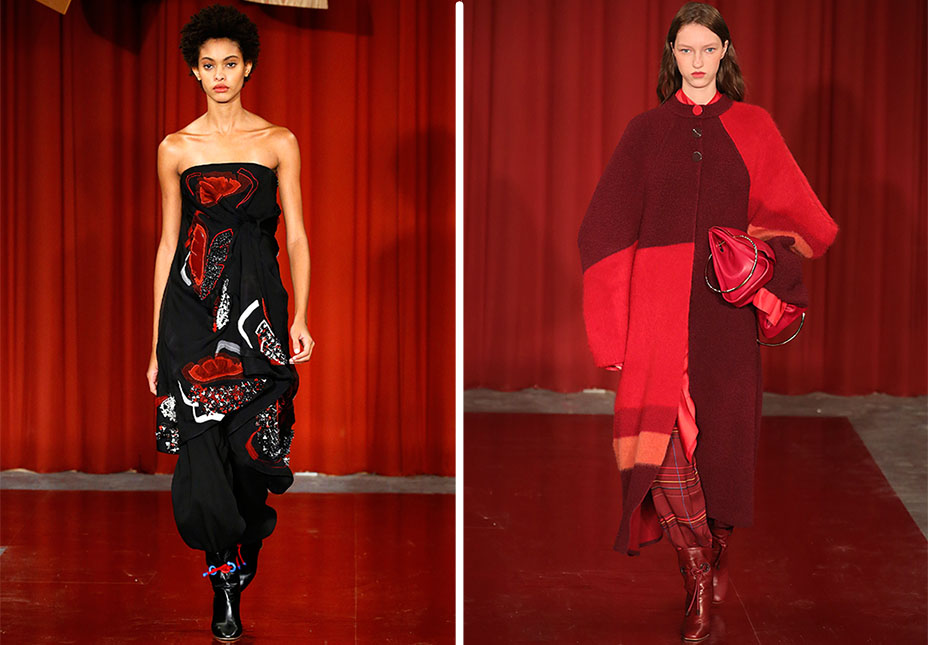 Quilting was used in new ways, in soft satin coats with a metallic sheen, and silk Aladdin-style trousers that somehow managed to make models appear all the more statuesque. The early 90’s, art-inspired mood was a fresh one though, if at first glance it doesn’t seem it, these are pieces modern women will seriously covet.