As the British press hotly debated the meaning behind Kate Middleton’s green-and-black BAFTA gown (while the fashion flock virtually ignored the issue, hello bubble), the Duchess of Cambridge hosted a reception for designers at Buckingham Palace. It was the most coveted invitation of the week; alas, it was only for the commonwealth (sorry about that revolution, your majesty!). Stella McCartney, Anna Wintour, Anya Hindmarch, Karen Walker and Livia Firth were among the attendees. The duchess, who has been especially enamored with Erdem lately, wore the designer again as he showed across town at the National Portrait Gallery on the fourth day of London Fashion Week.

We’ve seen the blanket as scarf on a few runways this season, but Roksanda abandoned all shawl pretense and sent models down the runway wrapped in blankets, clutching patterned plaid throws around their shoulders. Coats were voluminous and felt cozy and protective. 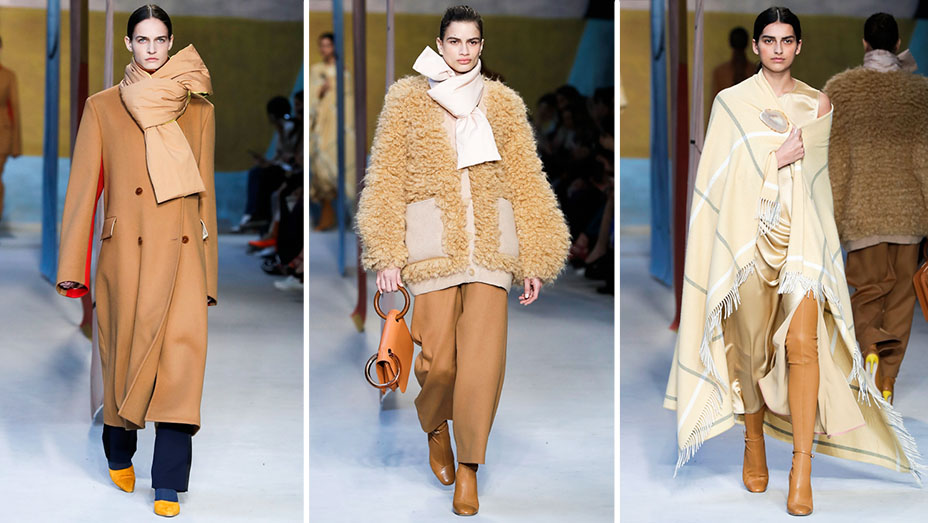 A stunning camel dress had a gentle twist and fold at the back and was paired with yellow gloves, an unexpected color combination we’ve seen a few times this week. Other camel coats had red undersleeves for a dash of color. Day dresses had knots and twists weaving the contrasting colors, while some voluminous skirts had external folds with pockets. Evening gowns were light and airy while being protective, as models were enveloped in tulle cocoons with Elizabethan collars.

This felt cozy and warm, despite a springy palette of pale pinks and bright blues, as well as sunny yellow, proving the future can be bright even in these dark times.

Erdem’s collection was provided a backdrop by the National Portrait Gallery, which closed for the first time to the public for a fashion show in its hallowed halls.

The designer has been on somewhat of a royal roll, with the Duchess of Cambridge wearing several of his dresses during her official tour of Sweden. He’s also in the running to design Meghan Markle’s wedding gown, with British bookmakers having him at 6-1 odds. He certainly gave a nod to another American who married into the aristocracy in the 1930s, drawing inspiration from the former Duchess of Devonshire. 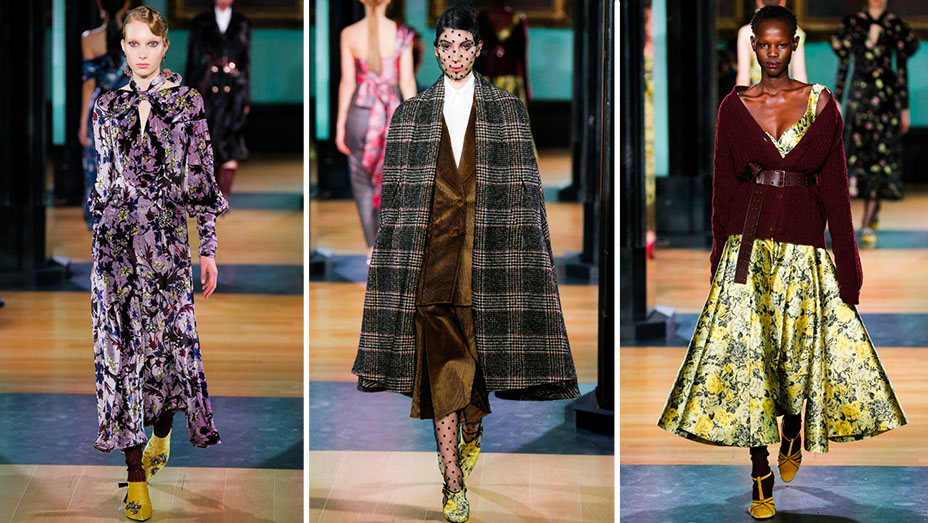 Here, Erdem showed bouquets of florals in a rich palette of deep golds and pomegranate in velvet and brocade. There were plenty of darker dresses, too; the duchess would have had several black-based looks to choose from had she worn him to the BAFTAs.

The high buttoned-up, pointed collar we’ve seen at other shows was also in play here, paired with high-waisted short trousers. That silhouette has been all over the runways this season, if it hasn’t yet hit main street. There was also plenty of tweed thrown in for good measure in capes and blazers, and some sequined and beaded skirts and dresses that swished and swooshed past the paintings.

The designer looked west with a collection influenced by Edward Curtis’ photos of Native Americans. The images were subtly interpreted as feather motifs on mini-dresses and sheer gowns, and as embroidered straps and bodices on tops. Silver-toed boots were a clever cowboy nod that didn’t feel costume-y at all, as were thicker belts and bold buckles. Feather sashes were more modern warrior than tribal tributes.

He showed that cultural influences can be used sparingly without wading into the tricky waters of appropriation. Koma held the show in a church, and, thankfully, there were no teepees on the runway. 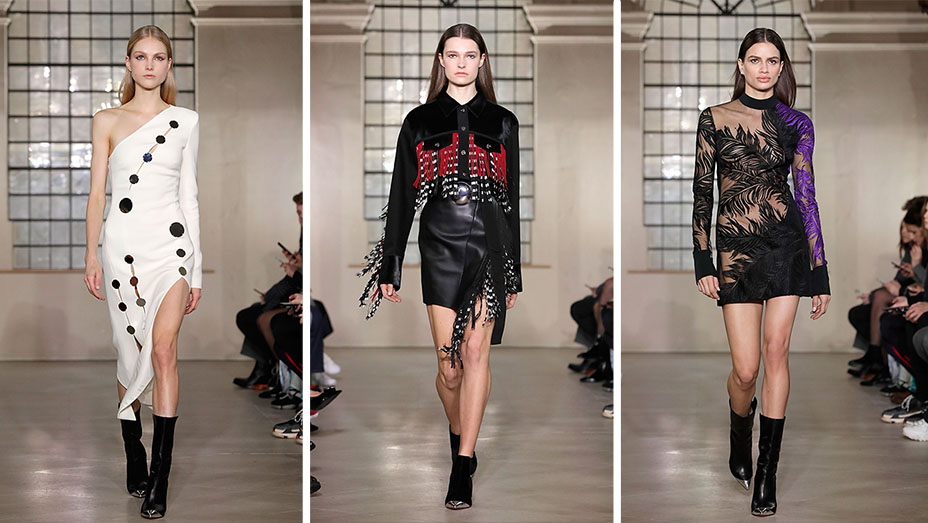 There was a lot of black and silver and sparkly silver grommeted minis, shirts and gowns that is sure to be a hit with the model brigade. They were out in force in the front row, including Jourdan Dunn, Lara Stone and Charlotte Wiggins.

Cara Delevigne is already a fan of his, as are Taraji P. Henson and Elizabeth Banks. The tough leather looks would be perfect for a more daring red carpet. Maybe we’ll see some fresh off the runway at Wednesday’s Brit Awards, the U.K.’s big music show.

It ranged from lingerie looks to heavy beaded coats with armor-like rounded shoulders, one for the inner nymph and the next for the outer warrior. Vinyl jackets and pants had an S&M tinge, though they were generously cut, but later presentations of beaded cage dresses were more direct. 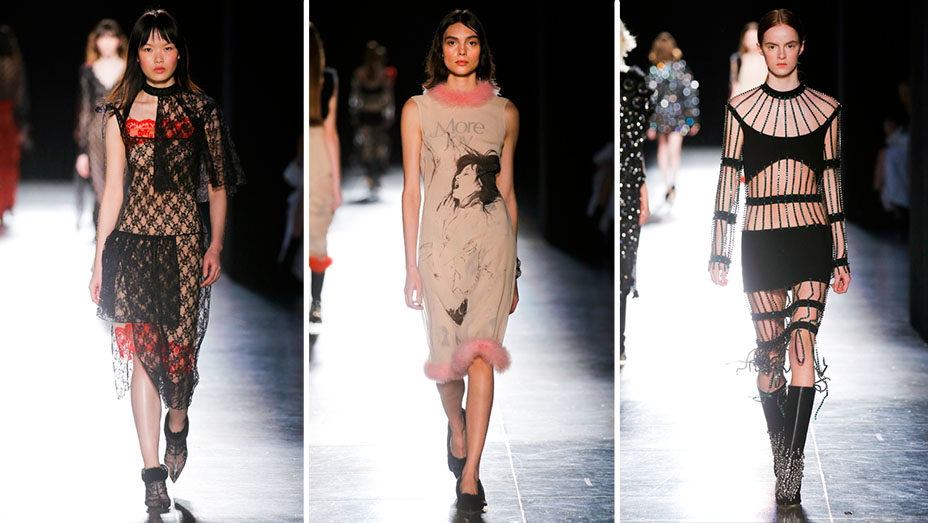 Several looks were shown with kitten heels (meow) to keep it just demure enough, but while it appeared chic on the runway, many of the designs would come across as vulgar on anyone more ample than a sample size.

Beaded dresses and suits were sublime, as were zip-away skirts that have red carpet potential. The last dresses featured sketches of couples in the throes of passion with marabou touches, which show notes indicated were “something Mrs. Robinson might wear.” But the story of Mrs. Robinson is at the end a tragedy – she’s literally replaced by a younger version of herself.

Set at the Tate Britain, Kane said he set out to “play with ideas of power and perversity.” Is sex still power in a post-Weinstein world? 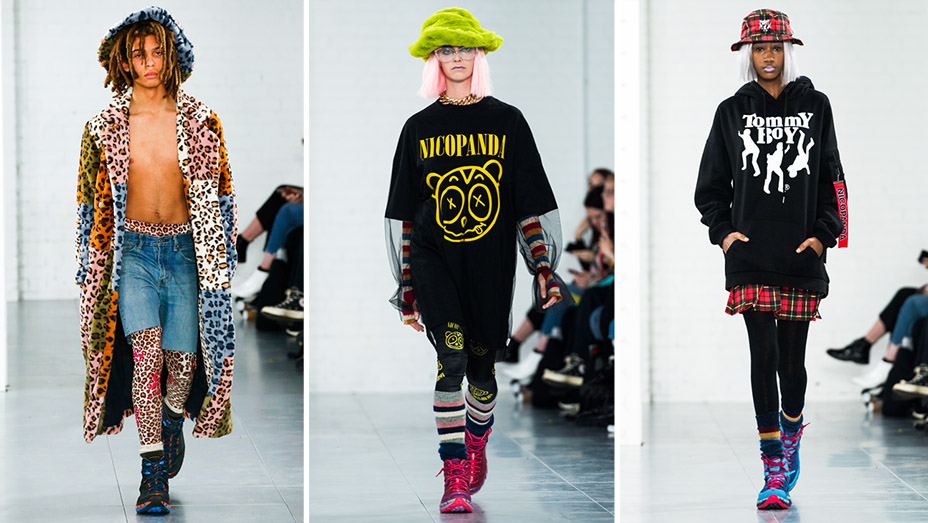 He called the collection “Smells Like Queens Spirit,” a nod to the New York borough, and certainly not the reigning monarch.

The front-row revelers had come for a party, sipping champagne and taking selfies. “I’m told that one girl is in Little Mix,” said another attendee, though no one was sure which one. (Turns out it was singer Jade Thiriwall.) Practically every ‘90s song one can think of was remixed into the soundtrack, making a cacophony of greatest hits that would put Now That’s What I Call Music to shame. The collection was a remix too, making the two styles play off each other. It’s not high fashion, but it’s marketable; Formichetti has chalked up recent capsule collections with Amazon, Champion and Urban Outfitters. The young devotees loved it and will surely snap it up.