London designer Roksanda Illincic may have the keenest sense of color of any designer at London Fashion Week. Her show at the Serpentine Gallery on Monday morning was a walking masterpiece of sunshine shades, modern shapes and confident style. 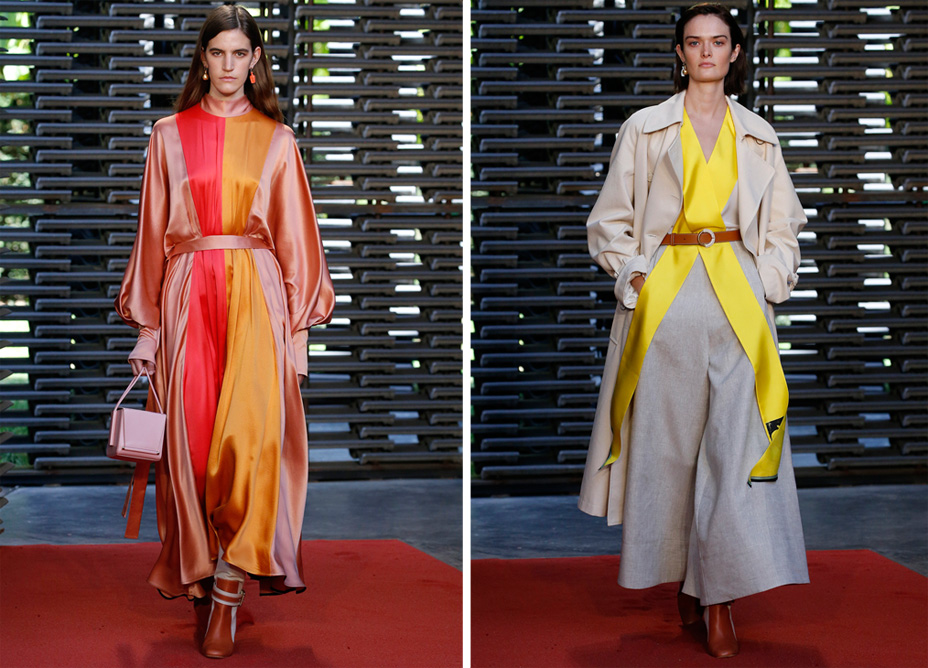 Seating guests outdoors in the gallery’s lattice-like pavilion, designed by Mexico City architect Freda Escobedo, let the morning light in on Illincic’s hot oranges, corals and turquoise blues, highlighting the geometry of floor-sweeping gowns, color-block dresses, full-cut culottes and softly shaped blazers. Some of the dresses were themselves walking canvases for line drawings of faces. 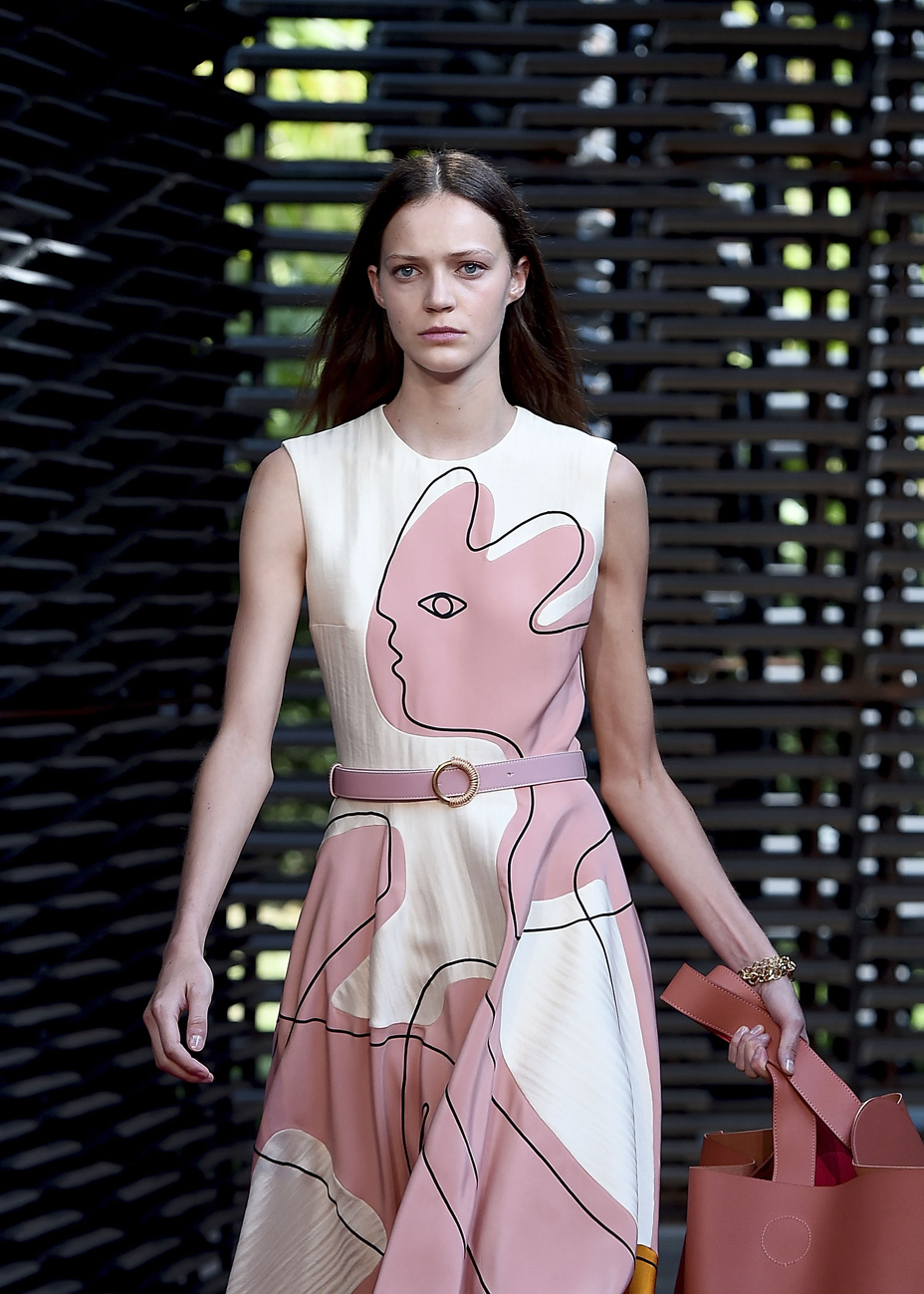 The Serbian designer’s background is in architecture, and she has cultivated an arty fan base — Marina Abramovic, who was seated front row, among them. 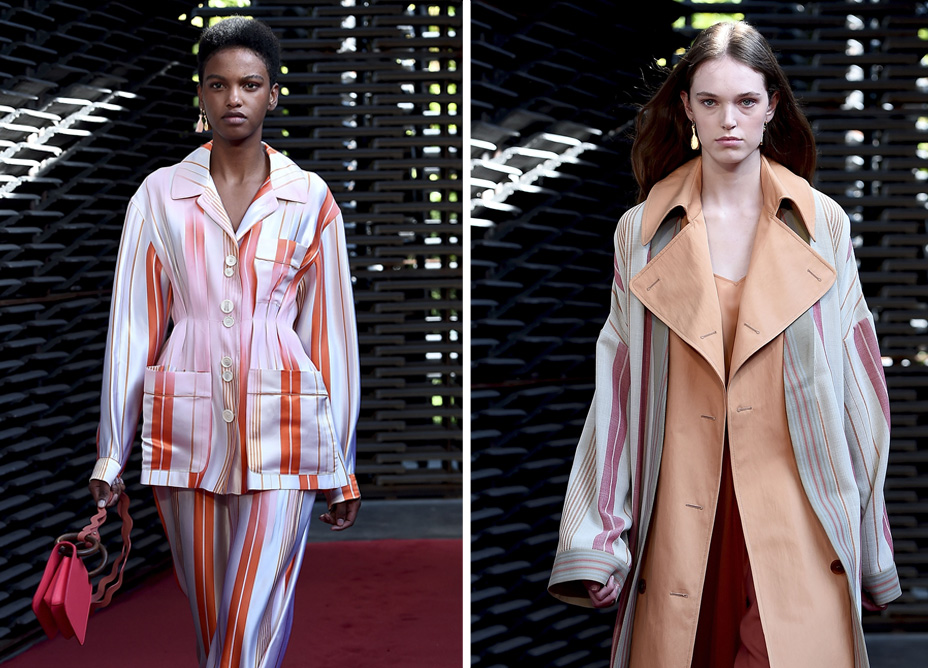 If Ilincic is the consummate modernist, new romantic designer Erdem Moralioglu is more of a traditionalist. Well, not so fast. There was more than met the eye to his spring 2019 collection, shown at the National Portrait Gallery, which is currently challenging its own traditions by hosting an art exhibition about Michael Jackson’s impact on contemporary art. 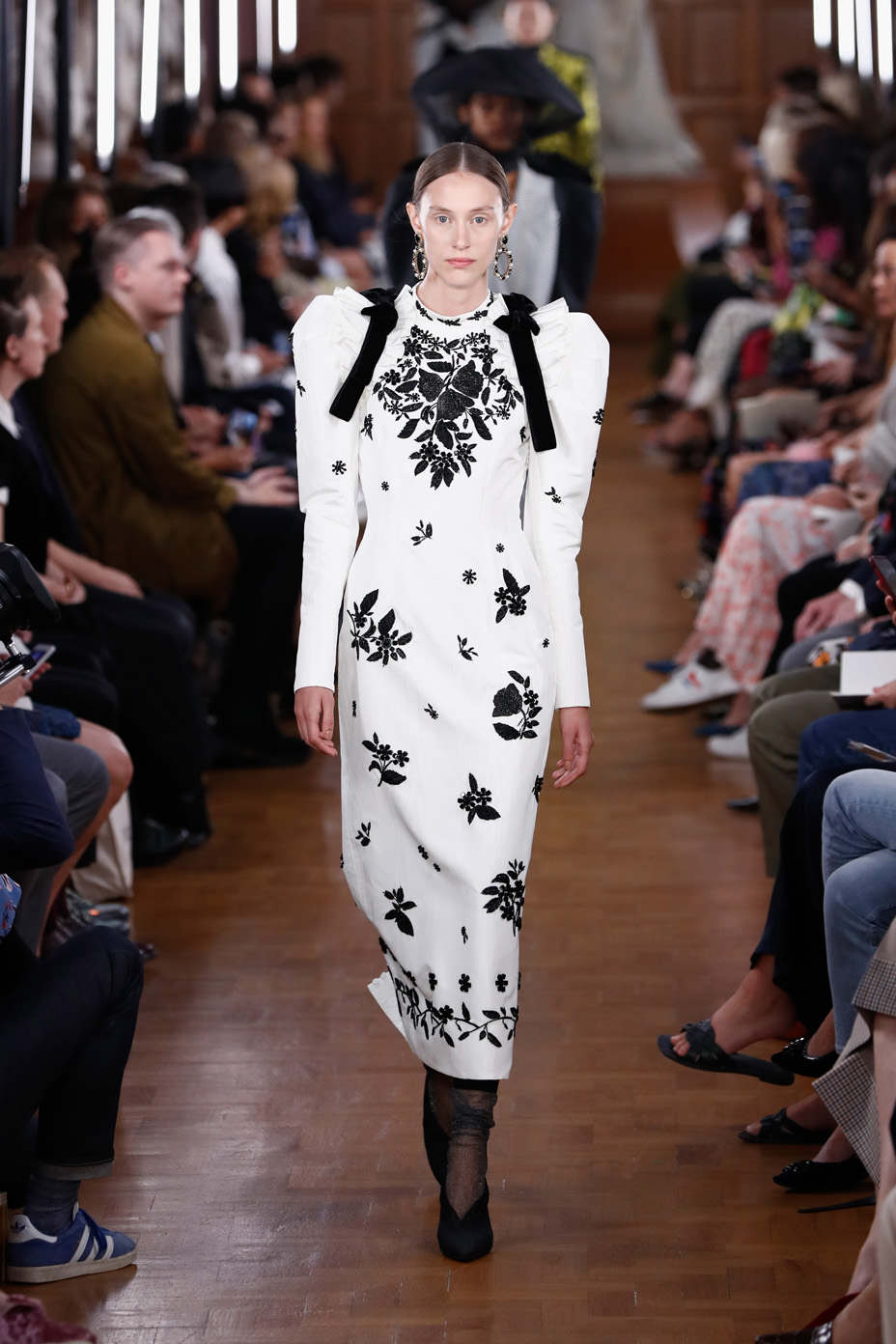 Moralioglu explored the idea of gender norms through Victorian codes of dress with a dash of dandy, in a collection that resonated with the times in theme, if not in execution. The inspiration translated into historical-looking, ankle-skimming coats and gowns in lush silks, trimmed in oversized ribbons and bows, and worn with classic veiled hats, a look that was a bit costumey. 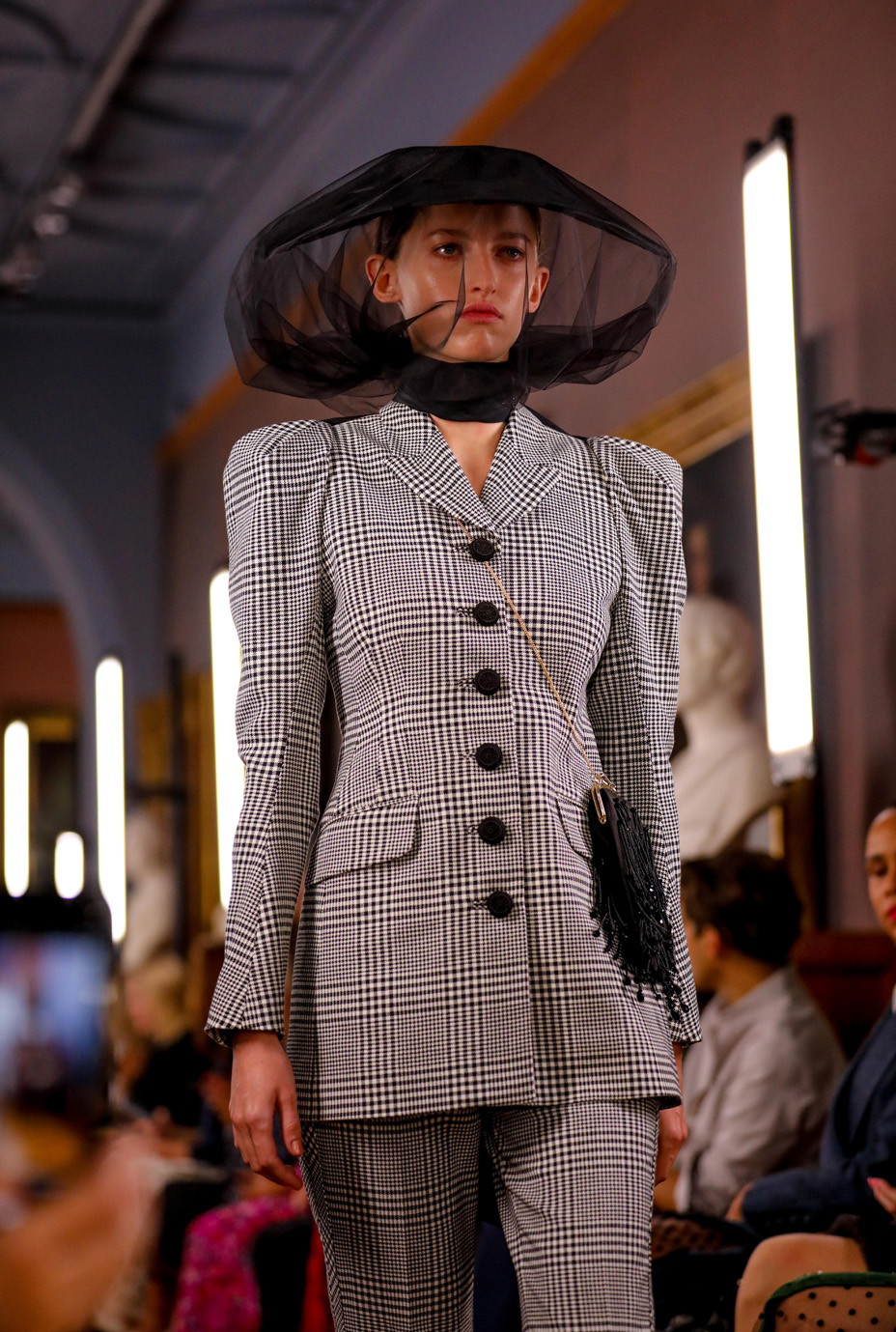 More compelling were the beautifully tailored Prince of Wales check pantsuits with power shoulders. If it was difficult to see sex appeal in the full dress ensembles, there was Christoper Kane, beloved by Rihanna, to provoke with an exploration of animal instinct.

Ironically, the standouts in his collection presented at the Tate Modern were the tamest pieces: cocktail dresses with bodice lace detail resembling insect exoskeletons, crystal edged skirts and square-shouldered blazers, and T-shirts with gaudy gem embellishments that had a so-bad-it’s-good appeal. Dresses in iridescent filmy layers, or all-white geometric folds also had a cool vibe. 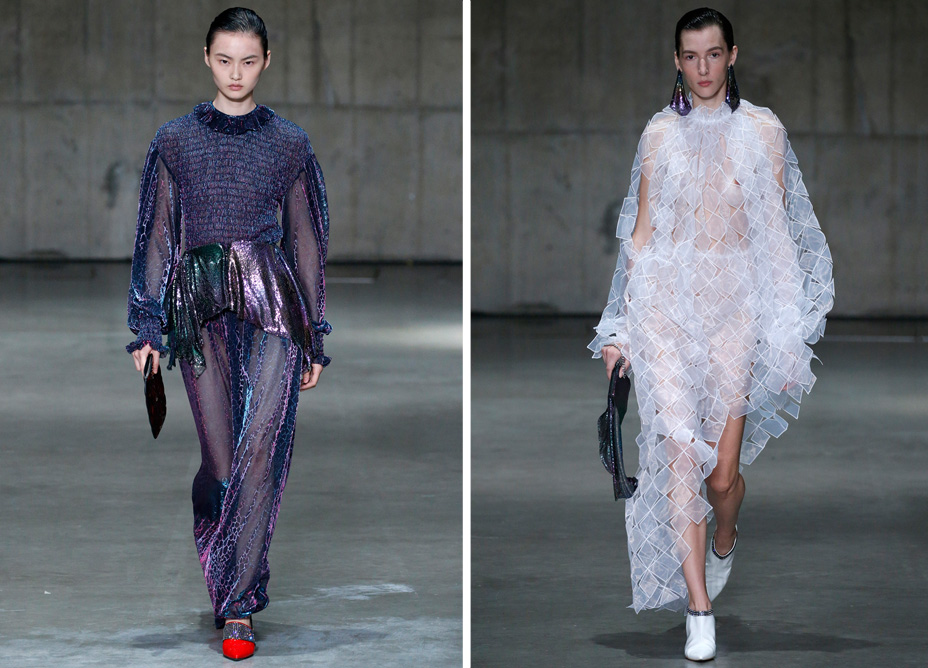 The fugly jeweled Crocs from Spring 2018 were replaced by patent leather booties sprouting winglike lace protrusions. And this season’s slogan T-shirts were anything but subtle. The first features two praying mantises with the message “Sexual Cannibalism,” the next two leopards pawing each other with the phrase “Foreplay.”

In a time when the cultural conversation is dominated by the #MeToo movement and gender issues, it seemed way out of touch. 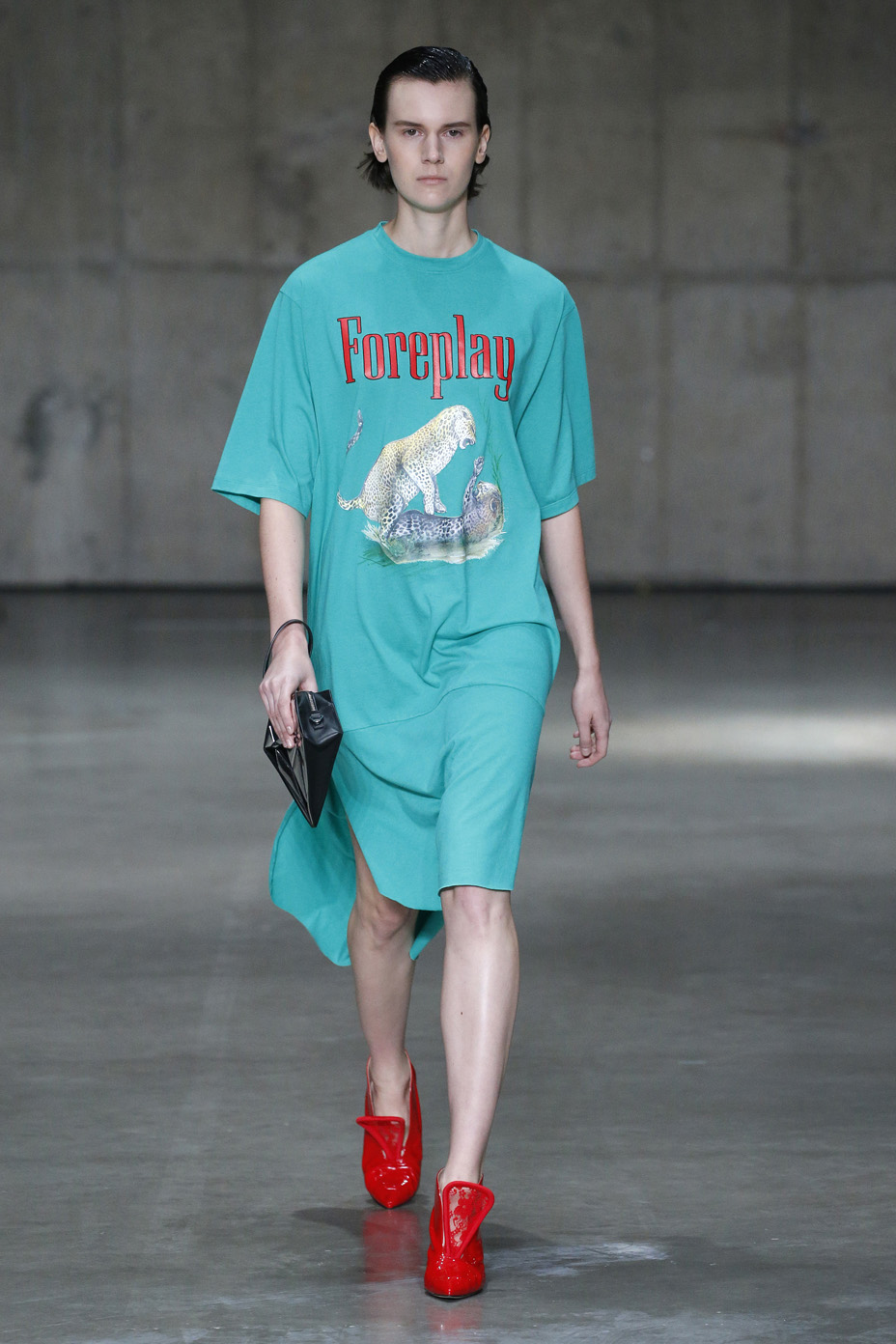