Seth Rogen takes another stab at playing a romantic leading man, albeit one still very Rogen-esque, in Lionsgate’s Long Shot, in theaters on May 3. Previously titled “Flarsky” after Rogen’s character, the story follows Jeff Flarsky, a successful journalist who one day finds himself coming into contact with his old babysitter Charlotte (Charlize Theron), now the Secretary of State and an aspiring presidential candidate at the outset of election season.

Needing to shake up her campaign and introduce some personality to connect with voters, Charlotte hires Flarsky as her speechwriter. The reunion is more than professional, though, as Charlotte is charmed by Flarsky and he taken by her intelligence and beauty. There are complications, of course, because she’s vying for the most powerful job in the world and he’s a stoner.

With Avengers: Endgame expected to continue dominating the box-office, tracking projections estimate a debut of about $9 million to $14 million for an opening weekend. Still, the movie boasts an 86 percent fresh rating on review aggregator Rotten Tomatoes and a generally favorable 72 score on Metacritic. Lionsgate has rolled out a campaign that plays up the chemistry of Rogen and Theron to try and bring audiences to theaters in a counterprogramming move.

The disconnect in looks and attitude between the two characters is evident on the first poster, released in February when the movie received its current title. Flarsky is shown wearing a shirt with Charlotte’s campaign photo on it. “Unlikely but not impossible” the copy reads while closer to the title we’re reminded of the previous movies the creators have worked on. That same message is shared on two subsequent posters (produced by BOND marketing agency) that show the pair dancing, either in street clothes or at a fancy dinner party.

The mismatched pair are still together on two more posters but this time the message has shifted to “Feel something different.” Those posters, like the second trailer, were part of a seeming change in focus that put more emphasis on the relationship between the two characters while still presenting plenty of laughs.

There’s no copy on the final poster other than pull quotes from critics praising the movie as something unique, funny and crowd-pleasing. Still, the strongest image used is just the two stars alongside each other.

A Promoted Tweet campaign increased the reach of the first trailer after it was released in February. The first TV spot aired during the March finale of The Bachelor on ABC, featuring Theron making her pitch to be the next contestant on The Bachelorette before encouraging the audience to check out the movie when it opens. (That same video was also used as a Promoted Tweet.) 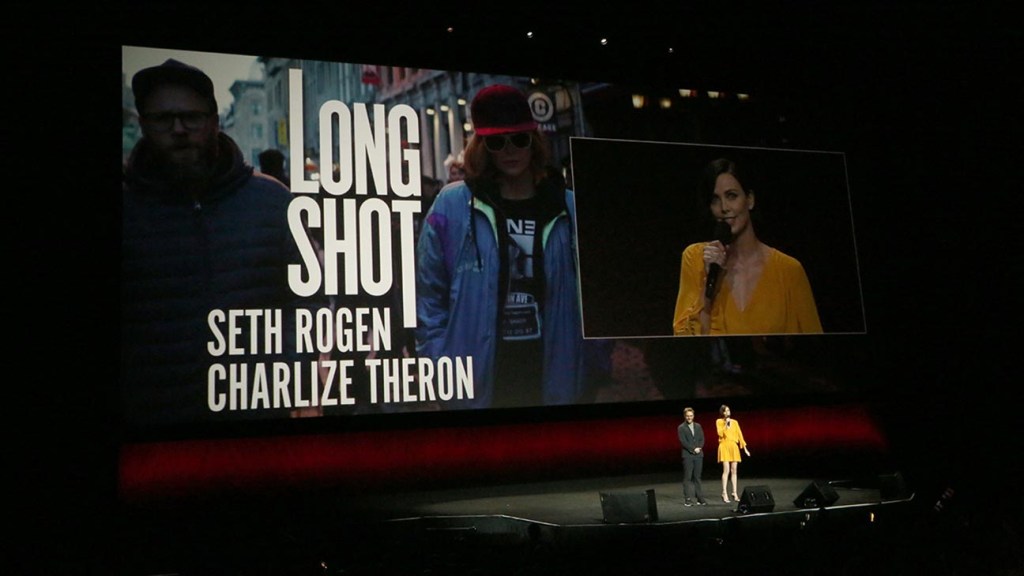 On March 9, Long Shot premiered at SXSW at an event at the Paramount Theater that included Boyz II Men, who also appear in the film. The comedy was described as a “crowd-pleaser” and the film received mostly positive early critics’ notices. Rogen and Theron then both went to CinemaCon as part of Lionsgate’s slate and presented the film to exhibitors on April 4.

The first clip offered an expanded look at the scene where Flarsky and Charlotte talk about their dating issues. Another featured the “micronapping” scene. A short featurette had Rogen and Theron talking about how much fun they had making the movie and working with each other. 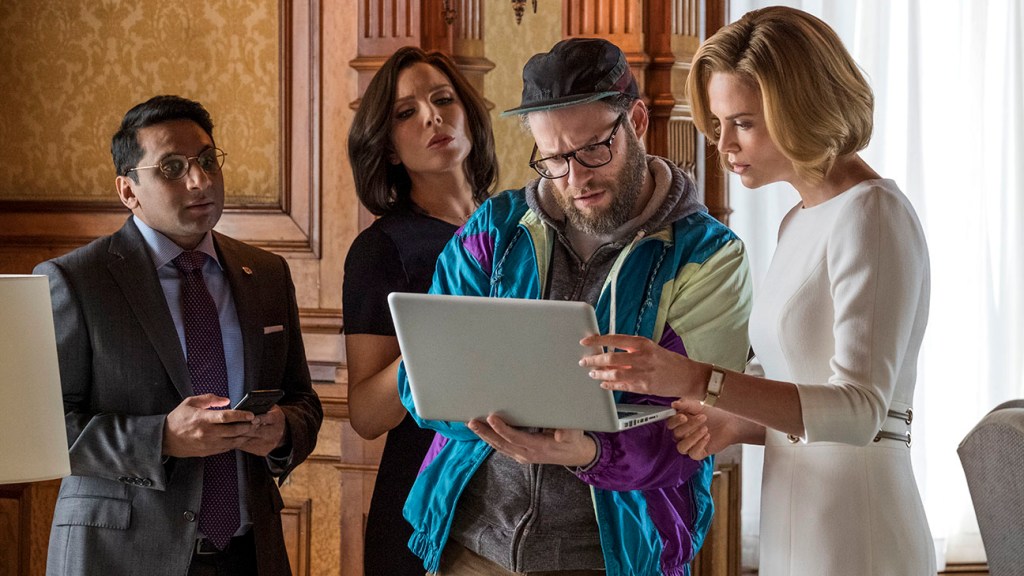 As the posters show, the main message being sent to the audience is that the combination of Rogen alongside Theron is inherently funny and worth their attention. That’s why the poster campaign uses various images of them in different situations, with the copy calling that juxtaposition out even more clearly.

The split in the campaign between heartfelt emotions and comedy indicates Lionsgate may not have found a single message to send to audiences about the movie. That challenge is evidenced in the sharp dropoff in YouTube views between the 8 million racked up by the first trailer and 607,000 of the second, released just a month later.

While the chemistry of Theron and Rogen is palpable — something the campaign has reinforced repeatedly — the movie still occupies a cinematic middle ground of a mid-budget film competing with tentpoles. Arguably the buzziest romantic comedies of late have been found on Netflix and feature young, multi-ethnic casts of charming, breezy actors while theaters are filled with sky beams and super villains bent on world domination. If a rom-com like this with adult leads seems like a throwback, that’s because it is.