More than 700,000 men, women and children took the streets of downtown Los Angeles on Saturday to peacefully protest for an array of interests as they relate to gender equality, including Hollywood’s Time’s Up movement. From the stars to the speeches, here’s what made the 2018 Los Angeles Women’s March memorable:

Viola Davis brought down the house

In arguably one of the most impactful moments, Viola Davis began her speech by quoting Malcolm X. “I’m gonna make it plain. One out of five women will be sexually assaulted before they reach the age of 18,” said Davis, her voice steady and strong over the silent crowd. “One out of six boys.”

Her voice quickened to rattle off more facts about sexual assault in the U.S.: “If you are a woman of color sexually assaulted before the age 18, then you are 66 percent more likely to be sexually assaulted again. Seventy percent of girls that are sex trafficked are girls of color. They are coming out of the foster care system, they are coming out of poverty. It is a billion-dollar industry. When they go into the sex-trafficking business — and they call it a business, trust me — more than likely they are gang-raped. I am speaking today not just for the ‘MeToo’s,’ because I was a ‘MeToo,’ but when I raise my hand, I am aware of all the women that are still in silence. The women that are faceless, and the women that don’t have the money and don’t have the confidence and don’t have the images in our media that give them self-worth enough to break their silence that’s rooted in the shame of assault, that’s rooted in the stigma of assault.” 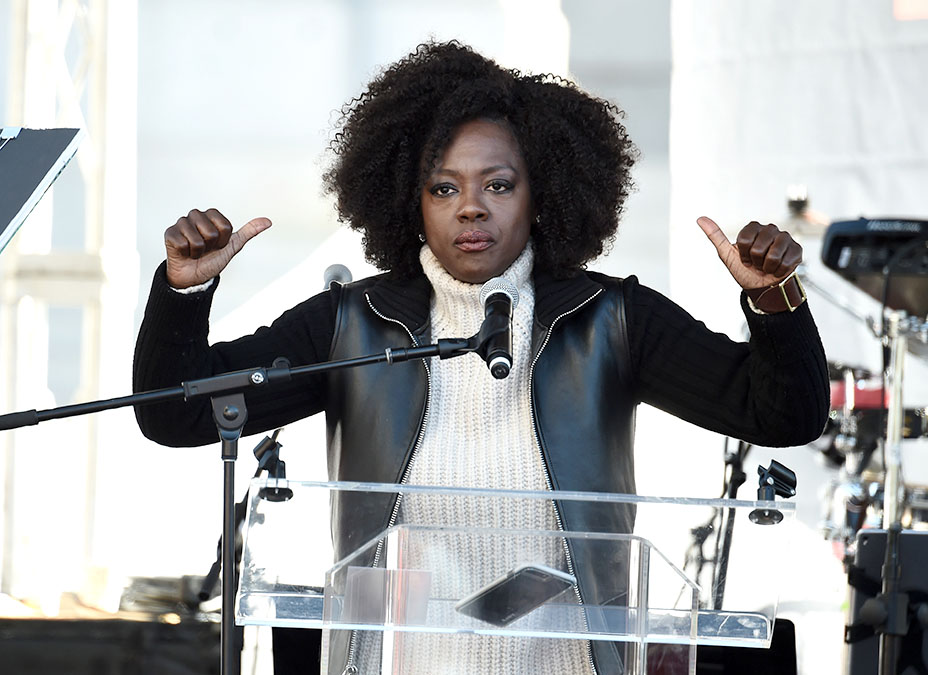 She continued: “Listen, I am always introduced as an award-winning actor, but my testimony is one of poverty. My testimony is one of being sexually assaulted and very much seeing a childhood that was robbed from me. I know that every single day, that when I think of that, I know that the trauma of those events is still with me today. And that’s what drives me to the voting booth.”

Ending the profound speech to introduce Los Angeles Mayor Garcetti, Davis told the emotional crowd, “I hope we never go back. It’s about keeping it rolling once you go home.”

Stars in attendance were thrilled to be there

Backstage was a happy place for actors and speakers to socialize. After giving her speech, Scarlett Johansson joined Time’s Up founding member Eva Longoria to listen to Alfre Woodard. Lupita Nyong’o, who introduced California Attorney General Xavier Becerra, was excited to take in the energy, standing on the side of the stage. Elizabeth Banks made a beeline for Melissa Etheridge to snap photos. Banks introduced Rob Reiner by quoting iconic movie lines from When Harry Met Sally…, A Few Good Men and, much to the crowd’s delight, The Princess Bride.

Curb Your Enthusiasm stars Mary Steenburgen and husband Ted Danson hung out in the green room area, where water or snacks were nowhere to be seen. Olivia Wilde, with bubbly daughter Daisy Josephine in tow, was immediately greeted by an excited Olivia Munn, dressed in a black motorcycle jacket with multicolored, glittery fringe. Liz Goldwyn and Marisa Tomei were sitting on trunks to get a better view, dancing and snapping photos. Sophia Bush wore a Rebecca Minkoff “Girl Pwr” muscle T-shirt ($58) and took photos with fans.

Pink is the official color of the Women’s March

I, Tonya star Alison Janney rocked a hot pink hat onstage. Indeed, the crowd was dotted with pink “pussy” hats, made popular last year after President Donald Trump’s “grab ’em by the pussy” quote given during an Access Hollywood interview. Little protesters under the age of 10 were decked out in the color, and some men wore head-to-toe looks in the hue. 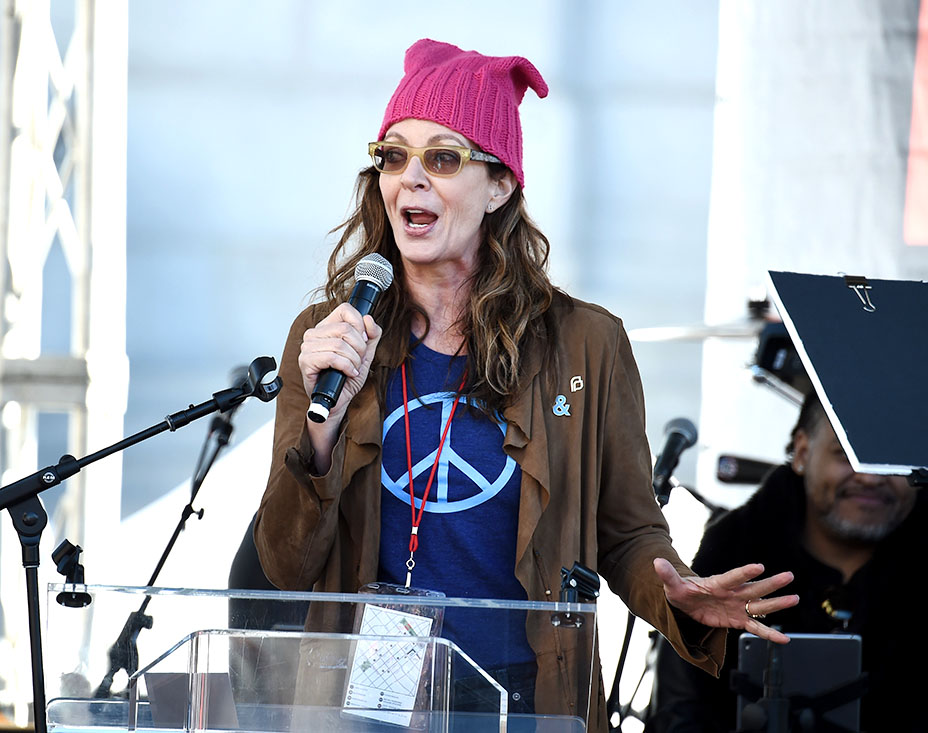 The future is female #womensmarch2018 pic.twitter.com/vDO4hznsnb

Aside from a couple of far-right Christian protesters on megaphones in front of the Biltmore Hotel (there was also an anti-abortion march in the area on Saturday), the crowd (more than twice the size of that at the 2017 march) was peaceful. People were saying “excuse me” when space got tight, Los Angeles Police Department officers were smiling and laughing (and noshing on hot dogs) … and not a single Trump supporter was spotted.

The Mayor had a moment

Los Angeles Mayor Eric Garcetti was a crowd favorite. No stranger to women’s issues, the mayor was involved as a college student in Take Back the Night, a European anti-rape movement that launched in New York in 1976. Under the Garcetti administration, there are no all-male commissions for the first time in Los Angeles’ history.

The mayor came to the stage and confirmed that over 500,000 marchers were in attendance, making it the largest Women’s March in the U.S. to date. “[Last year], a block away, I said as so many other speakers have said, ‘We will be judged not but what we say today, but what we do tomorrow,'” said Garcetti.

“So, what have we done?,” he continued, and then highlighted how the city hit the ground running after President Donald Trump’s first year in office. A successful protest and legal defense in response to Trump’s Muslim travel ban, the creation of the first big-city transgender advisory commission in U.S. history in response to the president’s proposed transgender military ban, and L.A.’s pledge to adhere to the Trump-ditched Paris Climate Accord were all cited.

Added Garcetti, “This is a city that we can proud of. … Women should be everywhere, not just somewhere.” 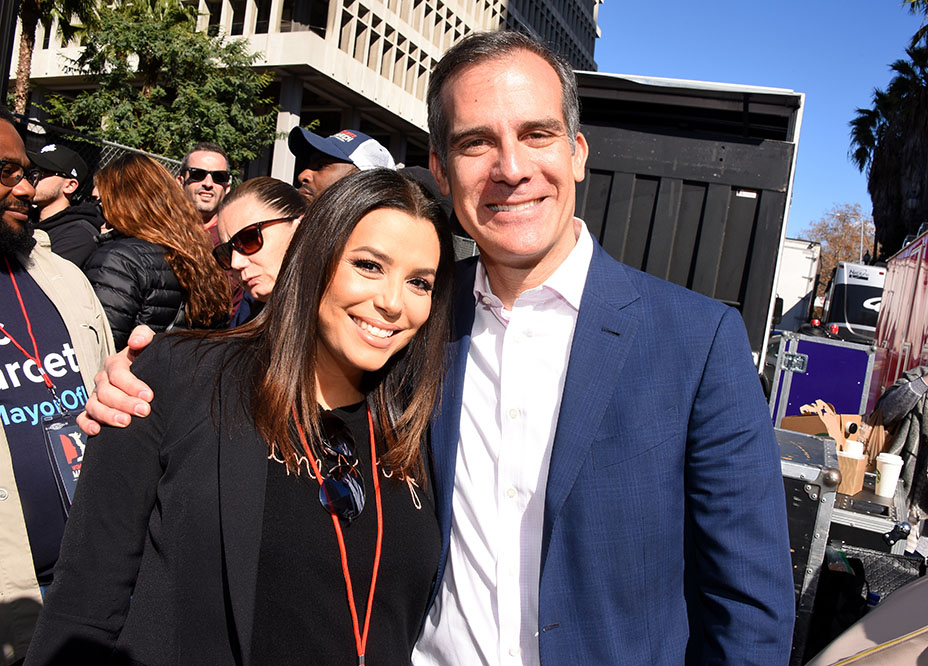