A lost piece of pulp history is returning via Canadian publisher Bedside Press, which is bringing Work for a Million — a 1986 novel by Eve Zaremba that features the first out lesbian detective protagonist — back to print in 2019, and also adapting the story into comic book format at the same time.

The revival of the property is the result of Bedside publisher Hope Nicholson’s relationship with novelist Margaret Atwood (Nicholson has packaged and edited a number of comic book projects of Atwood’s in recent years, including Dark Horse Comics’ Angel Catbird series), with the Handmaid’s Tale creator bringing Zaremba’s novel to Nicholson’s attention. Nicholson goes into more detail about the events that led up to the new Bedside Press editions below.

In addition to a reissue of Zaremba’s original novel, with a new cover from Abbott artist Sami Kivelä, Bedside Press will also be releasing a graphic novel adaptation of the story by Amanda Deibert and Selena Goulding, which will feature a cover by Criminal and Fatale co-creator Sean Phillips. (Phillips’ cover is above; sample pages by Goulding are below.)

Both the reissue and graphic novel adaptation of Work for a Million — actually Zaremba’s second novel featuring the character Helen Keremos, following 1978’s A Reason to Kill, but considered to be the stronger title to reintroduce the character to audiences — will be crowdfunded, with a Kickstarter campaign launching later Tuesday. 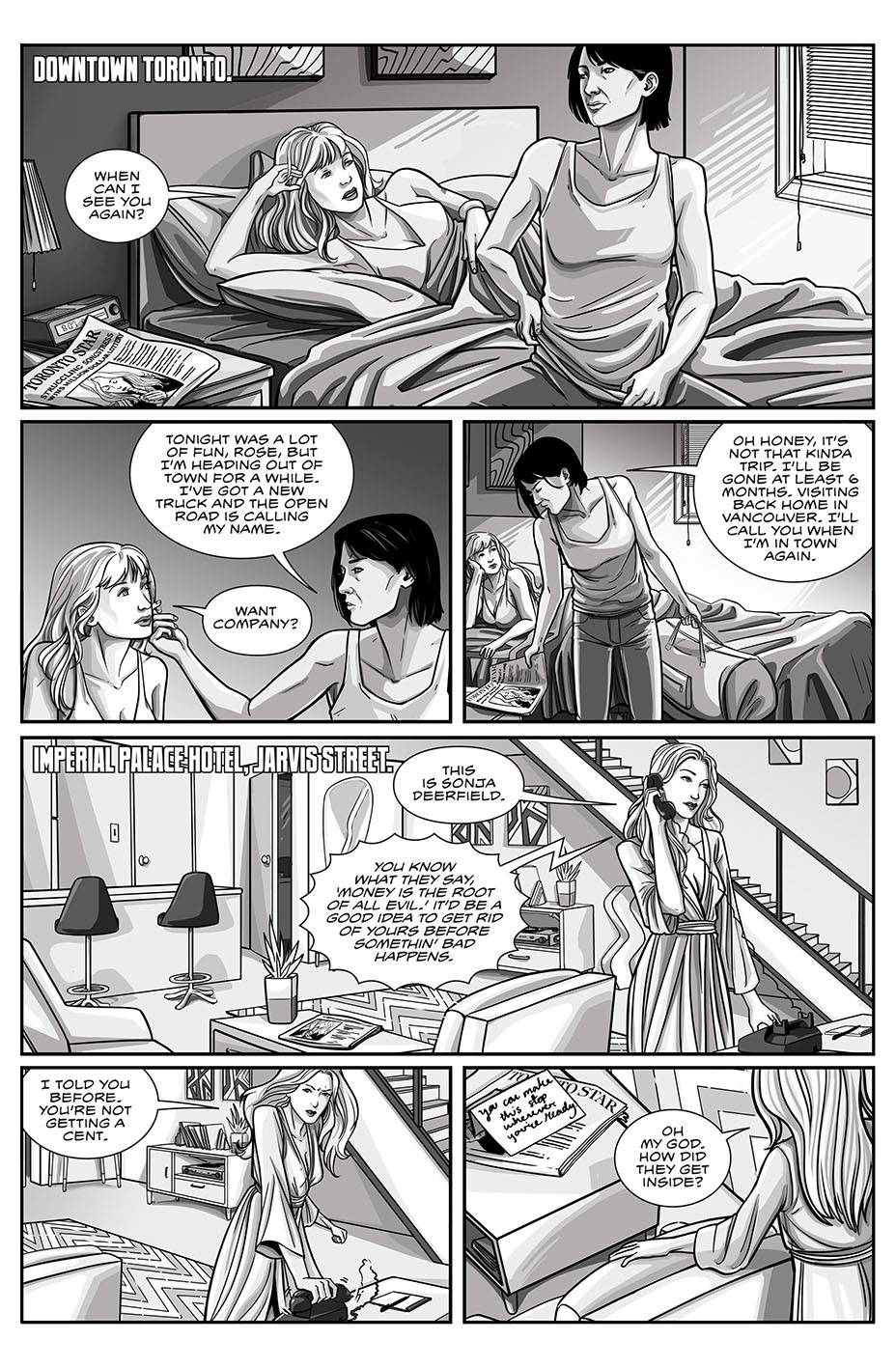 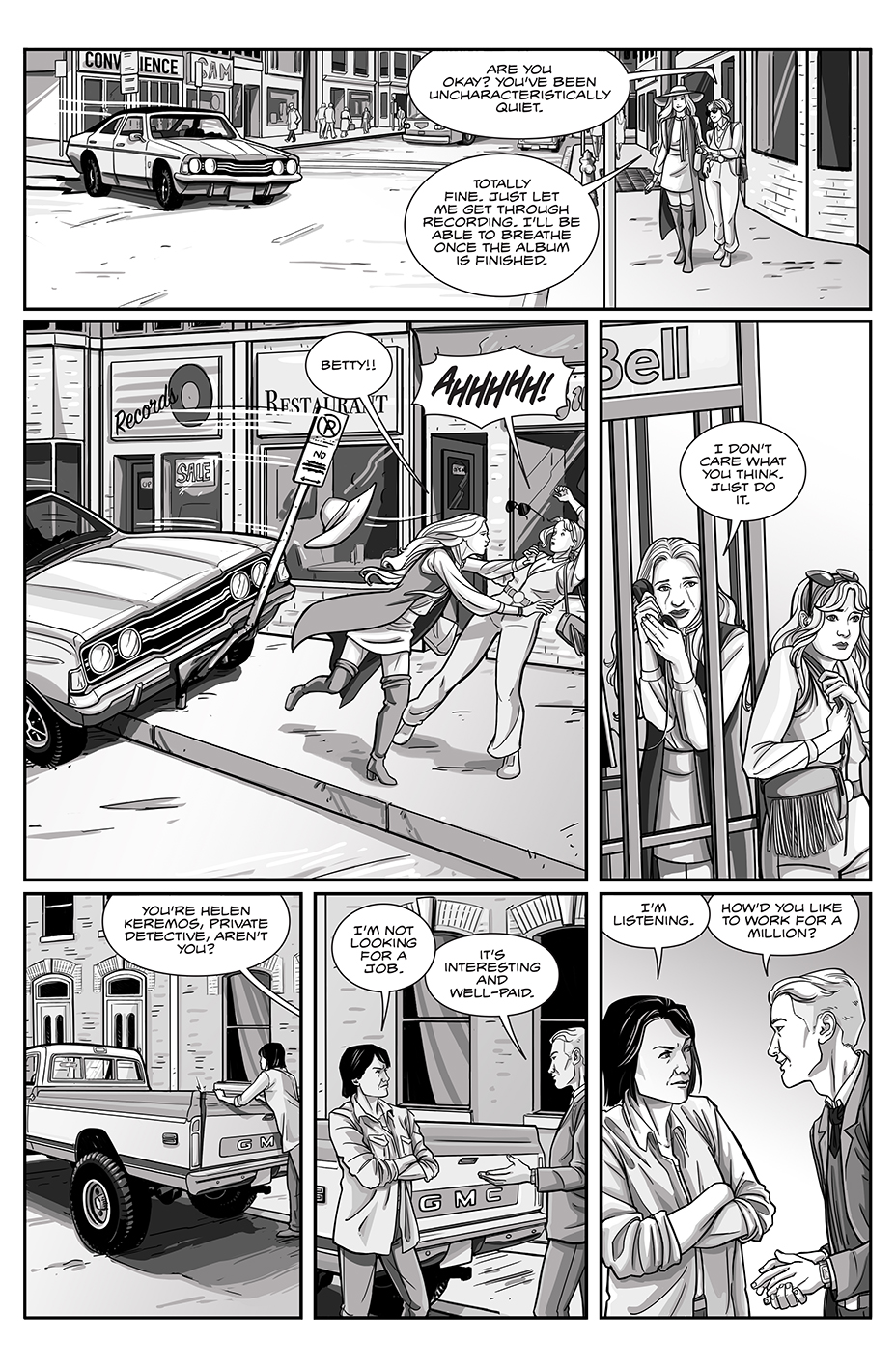 To accompany the announcement of the return of Work for a Million, Nicholson provided this essay about the project to The Hollywood Reporter:

“So, it all started with Margaret Atwood.

“She emailed me one day, to ask if I could assist some friends of hers with advice on taking a property of theirs to the next level. Though I had never heard of the detective Helen Keremos, I did some quick research online and could see why she thought of me instantly for this role. A character who premiered in an era I dearly love, the 1970s, set in Canada, starring the first openly lesbian PI, and written by an out lesbian woman?? This is the type of literary history I adore, forgotten but absolutely essential and groundbreaking.

“Out of all her adventures, the one that struck me the most that I had to work with was Work for a Million. Not only is it a steamy noir set in Toronto, but it features a will-they-won’t-they romance between the femme fatale and our dashing detective, Helen.

“Crime novels are a genre where LGBT representation is overall pretty low, nonexistent, or insulting. To have a novel that doesn’t focus on a lesbian character’s tragedy, but showcases her strength, charisma, and smarts, is incredibly unusual, let alone to have a romance in it too!

“I immediately knew that I didn’t just want to give advice, I wanted to publish this as a graphic novel. Eve, and her wife Ottie who has been instrumental as the organizer of this project, both agreed on this path. For the adapter, I crossed my fingers and hoped that Amanda Deibert, who I previously worked with on The Secret Loves of Geeks, would be interested and available, and luckily she was! I put together a competitive call for entries looking for interior artists who might be interested, and out of all of them, selected the artist Selena Goulding, who I also worked with before on The Secret Loves of Geek Girls. Not only is Selena a very skilled comics creator, but I knew she was pleasant to work with, dedicated to her craft, and best of all — knew Toronto very well, which is essential to the plot of this story. Ed Dukeshire, who had lettered parts of my last book Hit Reblog, also joined us, along with a variety of pin-up artists who were eager to showcase our lead characters in their own distinctive style.

“When it came to the cover, my immediate first thought was of Sean Phillips, whose pulp work in the Criminal series I admired so much. Though I thought it was a long shot, the project intrigued him for much the same reasons it did for me, the rarity of the plot and the charisma of the lead instantly drawing him in, and he drew a fantastic cover for our book.

“This book, both in its original prose, and in this new graphic novel (both of which are part of the Kickstarter), is an important part of crime fiction history, LGBT history, feminist literature history, and Canadian literature history. And yet, even though it’s set decades in the past, the energy sparkling between our leads feels very fresh and exciting. This is the perfect gift for those who love pulp and crime comics, with a Bogart-esque tough PI lead who still has a soft spot for vulnerable people to protect.”

More information about the project can be found here.