The day started with a Chanel rocket launch, and ended with a Louis Vuitton-sponsored trip to the Louvre.

Vuitton officially dropped the mic in the game of runway show venue brinksmanship, at least for this season, closing out Paris Fashion Week in monumental style. Guests entered the museum (which is closed on Tuesdays) through the famous I.M. Pei-designed glass Pyramide du Louvre.

After descending one escalator and ascending another (yep, even Michelle Williams did it), showgoers arrived at the glass-roofed French sculpture court known as the Cour Marly, in the Richelieu wing.

It’s Michelle Williams arriving at @LouisVuitton and descending the escalator with the rest of the show guests at the Louvre. #PFW pic.twitter.com/iuUg38OB1l

The gallery is filled with stunning 18th century marble statues, many of which were commissioned by Louis XIV, and usually stone-faced fashion editors found themselves giddy to be sitting next to finely chiseled military commanders, horse tamers and half-clothed nymphs. It was a pinch-me fashion experience as shadows of the sculptures by Claude Poirier, Nicolas and Guillaume Coustou and others, were projected on the walls as the sun set overhead.

An awe-inspiring setting would seem to call for awe-inspiring clothes. But instead, Nicolas Ghesquiere’s collection was decidedly down-to-earth, the mortal foil to the otherworldy artwork.

Setting is historic but @LouisVuitton clothes are down to earth contemporary. #PFW #MuseeduLouvre pic.twitter.com/ptZu6wdTxo 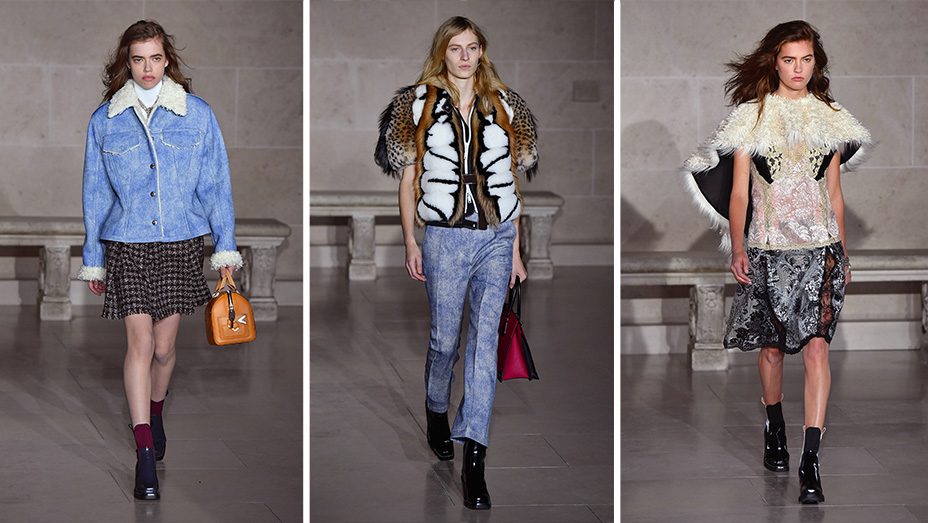 Lingerie touches added a feminine edge, including silk slip dresses worn under glossy leather coats or boxy tweed jackets. And for evening, short dresses were modern patchworks of brocades that looked like they could have come from the 18th century, contemporized for today with lace ribbon details, and fur capelets thrown on top.

The range was less a collection than a grouping of great, wearable pieces; the only thing tricky about that is maintaining the brand allure. Vuitton has long aligned itself with the art world (the runway shows are typically held at the brand’s own art museum, the Louis Vuitton Fondation), and freethinking fashion fans may enjoy the fact that this collection is not so easily identifiable. For that, of course, there are the LV monogrammed bags.

All the Looks from Louis Vuitton's Monumental Fall Show